Ken’s final day was designated a “clean-up” day, so we centered our adventure around what he still needed (and was reasonable to nab).  On a lark I suggested that we leave early in order to get up to the FM 1015 Pond by sunrise, as a couple of years ago, this was a good place to catch the goose liftoff from Delta Lake, and hope that a flock would fly right over so you could pick out a Ross’ from the Snows!  Unfortunately, the geese were apparently roosting elsewhere, as when we got there pre-dawn, there wasn’t a cackle (or even a crane roll) to be heard anywhere!  There was some water in the pond (my friend Pat had reported that it was bone dry the last time she was up there), so we enjoyed side-by-side Greater and Lesser Yellowlegs, a mob of Least Sandpipers, a distant Osprey in a field, and some Caracaras.  We gave it until 7:30 before deciding to hit Delta Lake Park proper for a restroom break.


What was going to be a quick stop turned out to be pretty productive!  On the way in I thought I heard something suspicious in the reeds, so I decided to park by the group picnic pavilion which gave us easy access to the bathrooms and the reeds!  Some pishing on the bathroom walkway actually brought in a Yellow Warbler instead of the hoped-for Swamp Sparrow!  We kept trolling as we walked along the perimeter of the reeds, and Ken was finally able to get a good look at a male Yellowthroat!  Before long I heard a “machine gun”, and we turned around to see a big, beautiful Ringed Kingfisher fly by in gorgeous light, fly off, and then circle around again to give us another great show!  We then got on the little bridge that goes to the woodland I dubbed “Mosquito Manor” in the past, and this time, a snappy little Swamp Sparrow popped out (but not before getting a Sora upset…)!


From there we headed to Hargill Playa, adding the reported Say’s Phoebe on the way in.  This was our best shot at Snowy Plover, and thankfully we were able to find a couple fairly quickly!  But scanning the pond to pad the list, I noticed a couple of female Hooded Mergansers diving for fish right along with the cormorants!  A couple of spoonbills next to a Great Egret added some color, and when a large raptor flew by that I initially thought was a Redtail, I said, “Wait – he doesn’t have a face!!”  Turned out to be a Great Horned Owl flying around in broad daylight, who then landed on a distant post, only to be harassed by a Harrier!  (Maybe that’s why he was flying in the first place…) 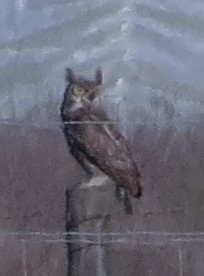 Last on the “reasonable list” was Vesper Sparrow, so we headed over to Brushline, where we didn’t have to go far before one posed in a tree.  Ken didn’t get the greatest of looks, though, before he flew, so we continued on, and thankfully another one landed right next to the car, showing off every field mark (and unfortunately not sticking around for the camera L)!  Since we had pretty much cleaned up his target list, Ken agreed to spend the rest of the time surveying the La Sal Del Rey Route (although around noon we abandoned the getting-out-and-listening-for-two bit, as it was creeping up towards 80-something).  We had some nice things:  a knockout White-tailed Hawk overhead, several groups of Sandhill Cranes circling and bugling (I was still wondering where all the geese went…), a singing Cassin’s Sparrow, and a Roadrunner actually flying through the fence!  The pond at the end of Brushline had a Least Grebe along with some ducks, and we also saw a giant Nilgai, which was a treat!  We were actually hoping to refind the Red-shouldered Hawk Barry and I had scared up at the end of Jesus Maria Road, but it wasn’t meant to be… 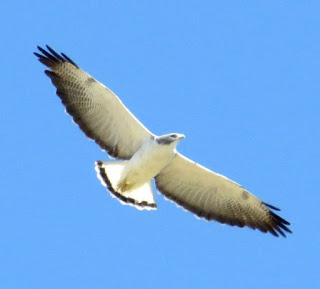 
With the heat now creeping up to 91, we decided to hit the Stripes in Raymondville (we went via the back road through La Sal Viejas so Ken could at least see it, even if it was bone dry) and call it a day.  Wasn’t bad with surprisingly more species than we racked up yesterday!  Bird List: