As migration grinds to a halt and the temperatures start to rise, the prospect of finding new year birds also slows down:  my year needs list according to eBird was pretty much limited to hitting Bentsen pre-dawn for the Elf Owl I missed during my Hidalgo County Birdathon, or the feral parrots at Oliveira Park in Brownsville, which requires one to be there a little before sunset.  Neither of those options really appealed to me, so I finally decided to do a road-birding route that would include some coastal areas, so I chose Boca Chica Boulevard, which is a route that starts past the Border Patrol checkpoint on SR4, and includes as many of the little side roads that you can explore all the way down to the beach (and even to the mouth of the Rio Grande if the beach is drivable)!


Much of the habitat along this road is coastal savannah and some thornscrub; the first stop is across the way from the famous Brownsville Dump, so you can at least add Turkey Vultures and Laughing Gulls here, but try as I might, I couldn’t find the Aplomado Falcon nesting platform that used to be there, so it may have been either destroyed or removed.  But that early the Common Nighthawks were calling, and picked up the normal open country birds:  Eastern Meadowlarks were in high numbers, as were Mockingbirds, Bobwhites, Mourning Doves, and even Willets defending their territories (and if they ever split the Willets, only the Eastern breeds here, so that makes it easy)!  The lack of a shoulder precludes regular half-mile stops, but where you can pull over, and where there’s good patches of thornscrub, Olive Sparrows, White-eyed Vireos, and Cardinals also went “over the top”.  In the open areas both Cassin’s and Botteri’s Sparrows were singing (plus a single Lark Sparrow), and at one stop I had a singing Blue Grosbeak.  Many Black-bellied Whistling Ducks were flying around, but I was pleased as punch to see a pair of Fulvous Whistling Ducks fly over the road!

There are a few roads that are worth exploring; Gavito Ranch Road is one I don’t usually explore, but I have gone down it while guiding (as it’s one of the few spots where you can get off the main highway and into the refuge habitat), but this time I didn’t get far as the road was mired in mud!  But it was good for Yellow-billed Cuckoo, White-tipped Dove, and Long-billed Thrashers.  (While I didn’t pick it up this time, during last year’s RGV Bird Festival we picked up a Groove-billed Ani along here, much to the delight of our group!) 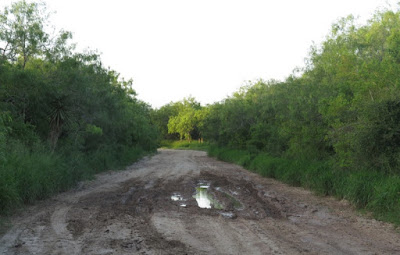 Nope - not this time!

The next good road to explore is Palmito Hill Road, as it’s a nice, wide dirt road that goes through great coastal savannah habitat and some thornscrub.  While it’s great for the sparrows, I was shocked (given the great cactus patches) that not one Cactus Wren showed up!  (Had lots of Bewick’s, though, along with Curve-billed Thrashers…)  Harris’ and White-tailed Hawks can be seen here, but this day a pretty Crested Caracara landed out in the field right next to the car!  Making the “square” added more woodland things like Brown-crested Flycatchers and Verdins, plus a pair of Black-crested Titmice going into their nest hole in a utility pole!  The road basically ends at a “residential” area where you need to turn around, but as I headed back out, I couldn’t believe my ears:  a Yellow-green Vireo was singing!!  I hopped out to at least get a recording, and I did see the little guy dart across the road at one point (the wind was picking up, so although it sounded like he was right there, I couldn’t spot him to save my life)!  Needless to say he went out on the Rare Bird Alert, and by the time the day was over two of my friends had headed over and bagged him for their own year lists – what a blessing (and I had no hope of nabbing any year birds that day)!

Habitat along the start of Palmito Hill Road 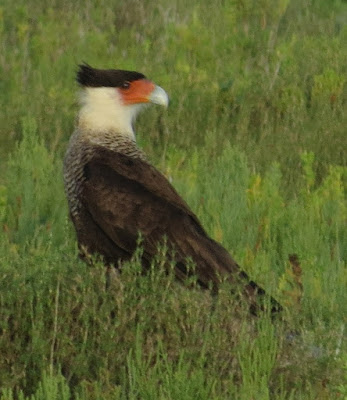 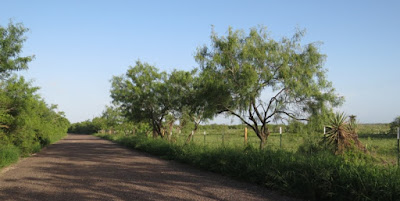 South side of Palmito Hill Road 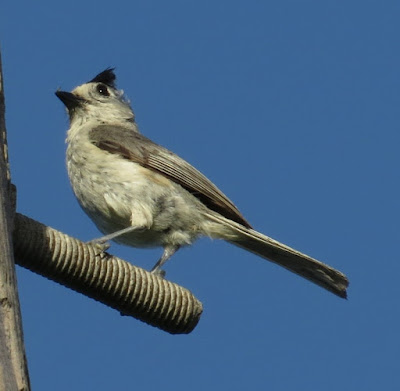 Recording of the Yellow-green Vireo


Everything after that was gravy; before heading down Quicksilver I checked the succulent plants for the restricted Xami Hairstreak, and got a Western Pygmy Blue instead!  Heading on down Quicksilver to the Rio Grande only added a flyover Caspian Tern, and a few stops closer to the flats added some herons, a few Horned Larks, and a skimming Black Skimmer!  This was also my first look at the giant Space-X complex, which hadn’t been built since the last time I was down there; one of my stops was just before the complex, where I first heard, and then found a Wilson’s Plover!  I had checked the tide tables, and the good news was that the tide would be going out by the time I got to the beach, but the bad news was that the wind was so bad and the waves so high that the beach was basically undrivable (except for those brave souls who wanted to risk running over something and ruining their tires…), so I just took a quick look down the beach both ways and over the Gulf, only adding Brown Pelicans and more Laughing Gulls to the list.

Another (closed) road into the NWR 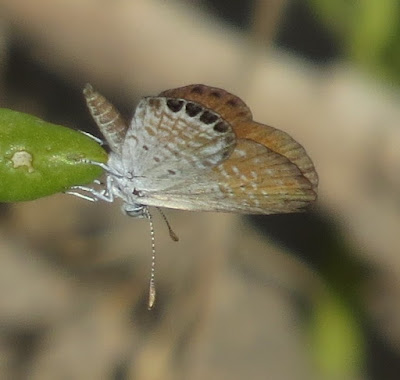 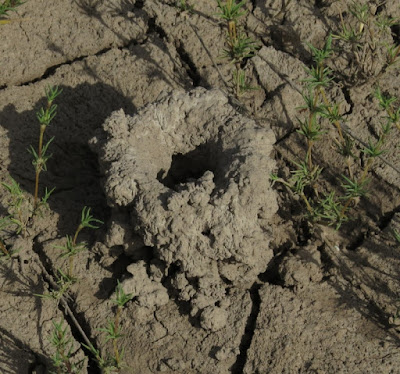 Odd mud tower made by some insect 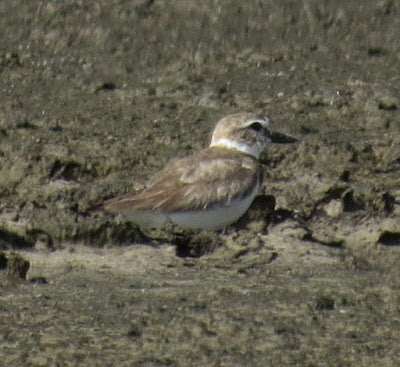 Called it quits after that with a modest 53 species for the morning, but that vireo made the whole trip worthwhile!  Bird list:

Posted by Alamo Inn B and B Gear and Tours at 9:21 AM No comments: