A Tale of Two Hoosiers, Part 3

Today was to be a “clean-up” day, but I was dubious as to how productive it was going to be with the weather forecast of rain, rain, and more rain!  It was actually clear as a bell when we headed out, so we decided to hit Santa Ana first and try for the Beardless Tyrannulet.  Before we even got on the trail the Chachalacas were attacking the oranges at the feeder area and paying no mind to us, and once on the trail a brilliant pair of Altamira Orioles showed off along with a male Cardinal!  It wasn’t long before we heard the tyrannulet, but we just couldn’t get the bugger to come out (I did see the bird come to the top of a tree, but he took off before David could see him L).  We checked the Willow Lakes for Ringed Kingfisher, but that was a no-show as well, so we padded the day list with ducks and other waterfowl; both species of grebes were very vocal, and at the far lake David spotted a Solitary Sandpiper!  A nice Gray Hawk flew overhead on the way back. 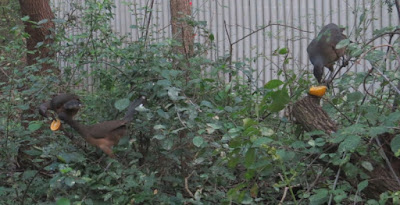 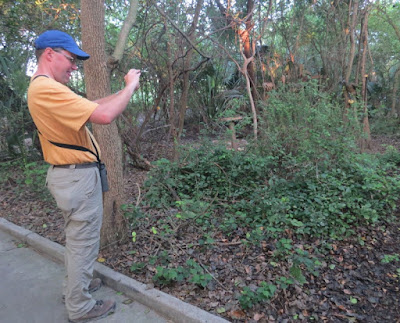 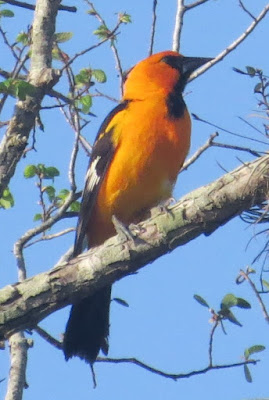 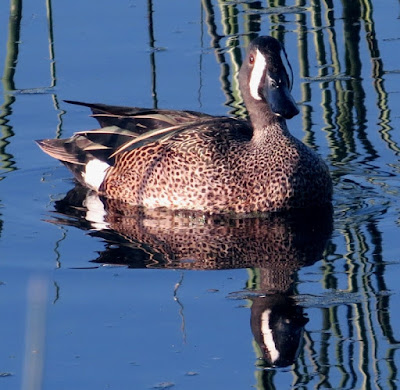 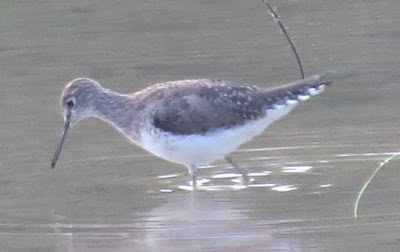 Solitary Sandpiper against the sun


Figuring we’d have another chance at the tyrannulet at Estero later, we then headed to Anzalduas for the Sprague’s Pipit (at least).  My worst fears were realized as we were coming up the levee and David said, “What’s that raptor?” when said raptor turned out to be a model airplane! L  (These enthusiasts occasionally use the “pipit field” to fly their remote-controlled planes, and there’s even a mowed runway for them…)  Determined not to let that stop us, we parked and headed out (starting well away from the activity), and thankfully were able to flush a couple of pipits (but they again never landed where we could get a good look).


From there we went to my little “corner” where I like to get out and look, and enjoyed two big rafts of Lesser Scaup along with Coots dotting the river.  Suddenly a big, beautiful Ringed Kingfisher rowed by – I could barely get it out!  That definitely deserved a “Yee-haw!” J  We kept watching the skies for Cave Swallows (had lots of Roughwings and Cliffs) and potential Zone-tailed Hawks, but added nothing but another Vermilion Flycatcher and House Finch (along with a Butterbutt we thought could have been an Audubon’s at first, but wasn’t), so decided to head on to Estero and try for the Pauraque.


Only problem was that, on the way there, we ran into a wall of water that kinda precluded us going there and hiking, so since it was still a mess when we got off on FM 1015, we decided to go north and get the White-tailed Hawk nailed down at La Sal del Rey.  Chuck didn’t realize how far it was as we kept going and going and going, but generally these things like the boonie roads, so that’s where we needed to go!  When we finally got to SR 186 and headed west to pick up Rio Beef, we could see the tremendous storm south of us that we had just driven through!  Heading north on Rio Beef, we were temporarily out of the rain and enjoyed a nice pair of Caracaras, but there was another awesome storm to the north that I had to stop and take pictures of!  As I did so, I noticed that the storm we had driven through had followed us north, and it was wicked-looking right behind us!  (Having lived through a tornado, Chuck had a hard time appreciating my love for storm-chasing...)  So we skedaddled down Ken Baker, and thankfully, before long there was a gorgeous adult White-tailed Hawk on a pole in front of us that David got great looks at before the rain came once again!  A couple of Turkeys were a nice addition as well! 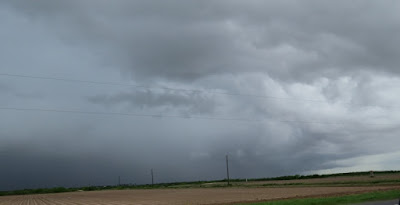 The Big Storm, looking south from SR 186 between Linn and Raymondville 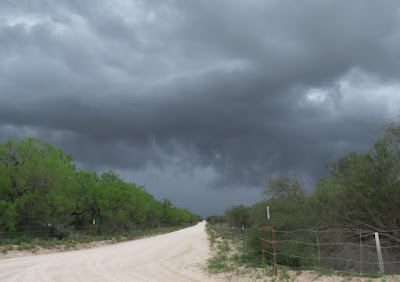 It followed us up Rio Beef Road!

Another big whopper is north of us...


After that we were getting hungry, so we swam through the storm and found a McDonald’s in Donna, then headed back to Estero.  The rain had let up by then (although still spitting), so we took our umbrellas and headed to the deck, where it started pouring again!  Also huddled in the shelter was Huck, Ranger John Yochum, my friend Tammie, and Father Tom, along with several other birders waiting out the rain!  After sharing storm stories and enjoying the Roseate Spoonbills out in Ibis Pond, the rain finally let up, and the whole crew led by Huck headed out to Alligator Lake for a shot at the Pauraque (and they had started breeding, as eggs and chicks had been seen, so it made sense that they had retreated)!  A flock of Snow Geese flew by in the distance, and then we took a cursory look at the night herons before zeroing in on the real target before we got dumped on again, and I could tell Huck was starting to sweat as the bird wasn’t obviously visible as usual!  But thankfully one young man spotted the bird several yards back, and you had to crouch down to see him!  Chuck managed to find a little window where the bird was visible without having to crouch (an impossible feat for some of us L), and that was a comedy of errors trying to get people on that view!  But eventually everyone got a look, and we headed back to the VC where Chuck took a breather while David and I looped around the TZ in hopes of hearing the tyrannulet.  Not a peep, although we added Clay-colored Thrush to the day list back there.

Roseate Spoonbills off the deck

The mad dash for the Pauraque! 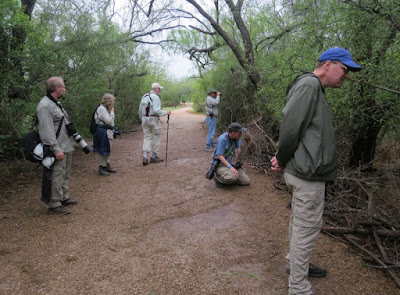 Now that they're breeding, the birds are being more elusive... 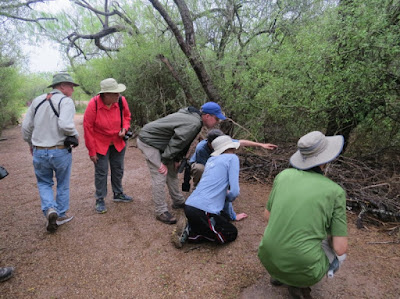 A young kid (with young eyes) spots one WAY back there! 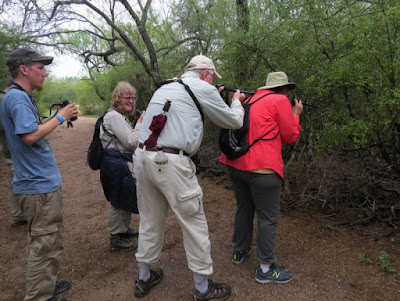 Chuck finds a window and uses his walking stick to point the bird out to one of the ladies!


Back at the car, we still had a little time (even though it had started to rain again), and Chuck suggested checking Santa Ana one last time for the tyrannulet.  But again he begged out of that one (Cameron County had worn him out), so David and I made the loop, again not hearing nary a peep.  The Harris’ Hawk pair posed nicely for us, though! 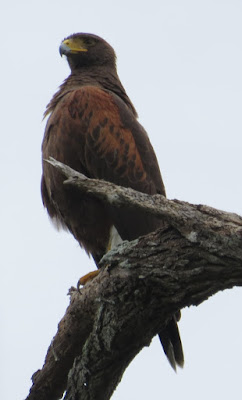 
We called it a day after that, with a respectable 78 species for the day, in spite of the weather!  Bird List: