Bird Fairs are a great way to meet new friends, and Keith and Audrey did exactly that at the British Bird Fair when they met Ian Saville, co-owner of Wrybill Birding Tours of New Zealand!  (His company's claim to fame was rediscovering the New Zealand Storm-Petrel after being written off as extinct for over 100 years!)  "Sav" and his wife were coming to the States anyway, so they decided to take a swing down to the LRGV and fill in some gaps in his North American list!

Sav's "want list" was pretty straight forward, targeting the common "Valley specialties", so we started pre-dawn at Bentsen where several things were tantalizingly calling but not wanting to show themselves:  Couch's Kingbird, Brown-crested Flycatcher, and even Green Jays played hide-and-seek until the sun broke over the horizon and gave us some light!  Dickcissels earned the name "Dotcissels" as they flew overhead giving their "brat" calls!  Chachalacas were a bit more cooperative (especially a family that was right overhead as we started out), but unfortunately one of the best targets, a Northern Beardless Tyrannulet, called once in the distance and then never called again.  A Gray Hawk posed briefly (twice) on a dead tree, and at the Resaca we heard Least Bitterns and got barely passable views of his first Kiskadee, but it was rather quiet.  When a pair of Clay-colored Thrushes shot through and I calmly pointed them out, he nearly fainted - he didn't realize that they're pretty much a "backyard bird" now!

We headed back via the Kiskadee Trail (where an Olive Sparrow miraculously hopped out onto the trail) and Acacia Loop (hoping for another shot at the Gray Hawk), and I was frankly feeling disappointed at the lack of cooperative birds when I heard some Groove-billed Anis a bit past our turnoff, so we headed down the loop a little, and before long a whole family group gave crippling looks!  (Unfortunately I had left my camera in the car...)  The bird action actually picked up a bit on the way back to the parking lot, with a Roadrunner that came out onto the road in response to my coo, a magnificent Ringed Kingfisher flying right overhead, Cave Swallows at the bridge (I heard a distant Black Phoebe but he didn't need that one J), and finally a Buff-bellied Hummingbird in the gardens!  While we were waiting for the hummingbird to show up, an Upland Sandpiper called overhead, sending Sav running around the corner to try and spot it, which he did!  We also had a tree full of orioles which included three species:  Baltimore, Hooded, and Orchard!

When I asked him the day before if he was "into" butterflies, he said he was, so I figured a visit to the National Butterfly Center was in order:  not only do they have feeders where more of his target species would probably appear, but a report of not one, but TWO Mercurial Skippers had ME chomping at the bit to at least try for them!  We flushed a Bobwhite heading down to the "old gardens", but we didn't spend a whole lot of time carefully "grooming" the jasmine tree where one of the rare skippers had shown up as birds were the priority.  I did point out some common things like Fiery Skipper, Giant Swallowtail, Gulf Fritillary, and Brown Longtail, but the Clavipes Sphinx took the prize!  Snouts were all over the place, and he mentioned that most every car and truck coming down the highway from Galveston was stopping to clean their windshields of the hapless little buggers!  The feeders came through for us, with lots of Green Jays, a cooperative White-tipped Dove, a couple of Black-crested Titmice shooting in and out, and finally a young Altamira Oriole allowing a brief view. 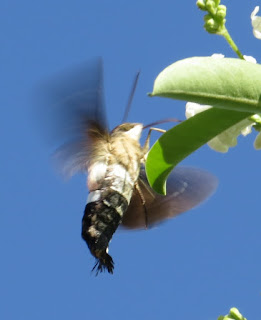 From there the plan was to head to Anzalduas County Park via the levee road, but as we poked down Old Military Highway Sav suddenly knocked on my dashboard - I thought he was warning me about the state trooper parked on the side ahead of us, but he had seen TWO Ringed Kingfishers perched on the wire in front of us - he was just so excited he couldn't get it out! J We actually had another Gray Hawk along the levee (that didn't stay put) and unsuccessfully tried to lure out a Long-billed Thrasher, but did get some nice looks at migrating Eastern Kingbirds.  When we got to the park we discovered it was closed due to storm damage!  It was still cool to show him the Rio Grande and Mexico across the way, however...

That actually worked out for the best, as that allowed us to continue on to Quinta Mazatlán, where despite the heat we could somewhat escape within the trails!  More Chachalacas greeted us, and a thrush-like "chup" got us onto a motionless but beat-up Clay-colored Thrush!  The Green Parakeets were long gone from the new trail, but we got plenty of Inca Doves, and just before the visitor's center we came across a Guava Skipper that I insisted he "needed" for his butterfly list! J Near the feeders we heard a hawk calling overhead, so I ran out into the open to try and spot it, and initially found a Mississippi Kite WAY up there, but that certainly wasn't what was calling!  Sav spotted it - a nice Swainson's Hawk!  No specialty odes were at the pond, but on the way back to the main road Sav spotted his life Canada Warbler, along with a Black-and-white doing its "nuthatch" thing! 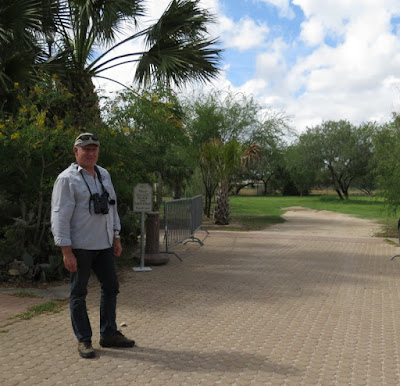 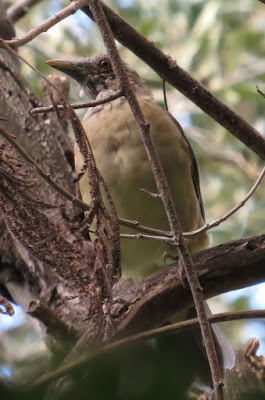 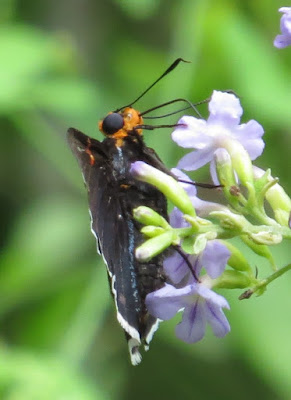 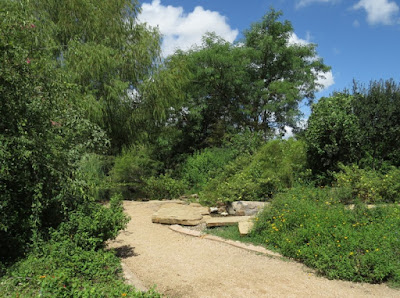 Dropped him off for "siesta" after that, and at 5:00 his wife Jody joined us for a trip to Estero Llano Grande State Park!  But first, a stop at the Progresso Silos was in order, as Bronzed Cowbird was another target bird!  Bagged that one easily enough (along with tons of House Sparrows), then headed up to Estero.  The saying, "Estero Never Disappoints" was sure evident this afternoon, as the light was just perfect for viewing waterbirds in Ibis Pond, and in short order we got his target Least Grebes, along with both yellowlegs, dowitchers, stilts, Blue-winged Teal, Common Gallinules, and a posing Black-bellied Whistling Duck!  Swallows were all over:  mostly Banks, but also a few Barns and Roughwings, and Sav spotted a Tree.  A few minutes at the hummingbird feeders got another Buff-bellied, along with a young male Ruby-throated showing just a couple of red feathers! 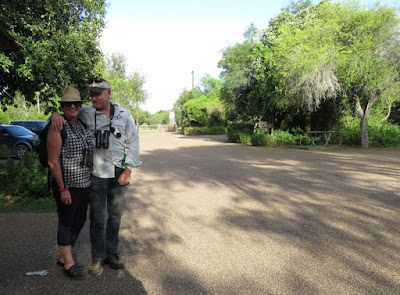 Jody and Sav at Estero 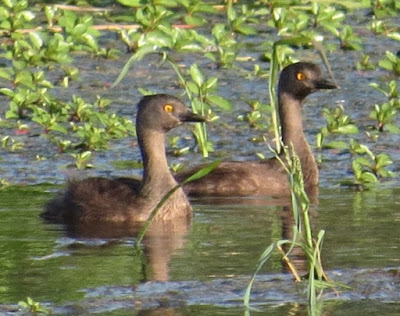 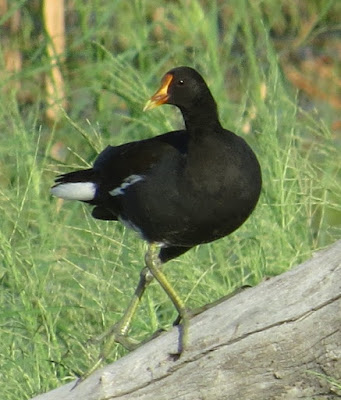 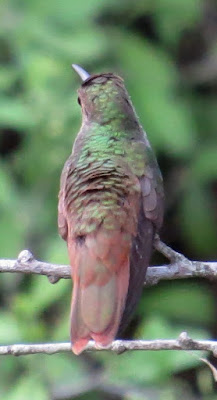 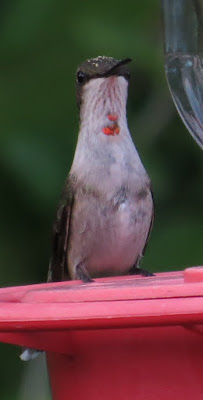 Heading over to Alligator Lake, we checked out Dowitcher Pond quickly but only found a family of Black-bellied Whistlers.  Grebe Marsh had a Spotted Sandpiper, and what I thought was another one turned out to be a Solitary Sandpiper!  After the turnoff we found two Yellow-crowned Night Herons, and at the new overlook there Sav spotted his Green Kingfisher!  The Pauraque hunt was next, and I was sweating a little as he wasn't in his usual spot right next to the trail, but after going around to the "back" trail, I miraculously spotted him in a position where great looks were had by all!  (Sometimes he'll sit facing you all hunkered down in some roots...)  We didn't think much could beat that, but the screech owl box had not one, but TWO little Eastern Screech Owls peeking out of the hole!  I told Sav to put this one "in the bank", as they may split it in the future! 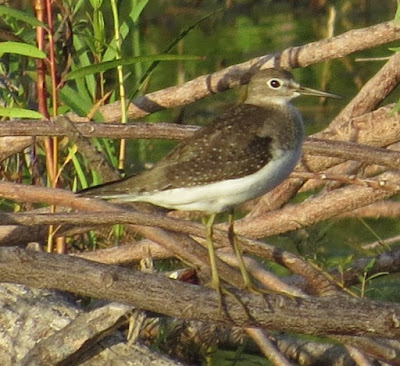 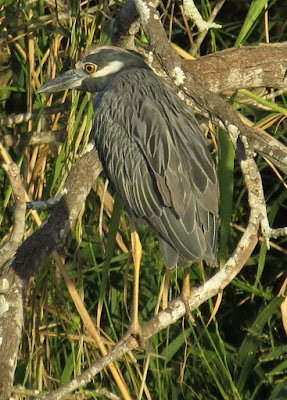 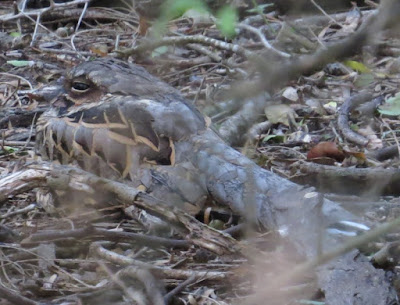 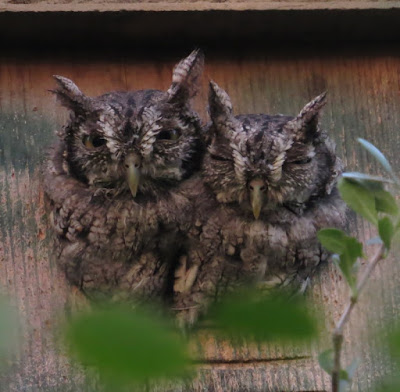 No Alligators at the overlook (or much else for that matter), so we headed back to the parking lot, where Sav decided to give the parrot roost a try after all!  A young Harris' Hawk sat on a pole on the way out, but it was getting pretty late (and we did have nighthawks of unknown species batting overhead), so cruising through the suburbs of Weslaco proved fruitless (except for a low-flying Chimney Swift), so we decided to call it a day.  My list was 88 (and Sav saw a couple I didn't), so our combined list was probably well over 90 for the day (right along with the temperature)!  Bird List:

Posted by Alamo Inn BB Gear and Tours at 2:46 PM No comments: