Melanie and Jim, two birders from my home state of Michigan, just wanted a half day of guiding, which was actually nice as it had been unseasonably hot this week!  They were easy-going birders who just wanted to see the local stuff, so rather than spend all morning hiking around one park, I opted to make short stops at a line of hotspots and wind up with a stroll around the Chachalaca Trail at Santa Ana, close to home.


We started at Bentsen right around dawn, but because it was gloriously overcast (my car’s thermometer was already at 78) you really couldn’t tell!  A Kiskadee was the Official Greeter in the parking lot, and as we made our way to the restrooms, a nice Clay-colored Thrush sat out in the open in the butterfly garden area.  On the main road, lots of Couch’s Kingbirds serenaded us, and a Golden-fronted Woodpecker sat up pretty.  As we crossed the canal a harsh crack alerted us to a Ringed Kingfisher flying by, and a Lincoln’s Sparrow in a brush pile was very cooperative, along with a little Orange-crowned Warbler!  We ran into Hawk Watch John who showed us where the Elf Owl had made a home in past years in the telephone pole (looked like a pair of Goldenfronts had taken over).  Up at the Nature Center, the Chachalacas were already at the feeders, and the Green Jays came in to give great looks; even a Ruby-throated Hummer showed off in the Mexican Olive!  On the way back the Cave Swallows were swarming (they even flew under the bridge to give great looks), and both an Altamira and Hooded Oriole called from the tram area; the Altamira was a challenge to see well, but the Hooded came right out for a great comparison view!


From there we crawled down Old Military Highway (including the levee), where a Long-billed Thrasher sat up on the top of a tree, singing away!  A lovely White-tailed Kite sat in a field along the entrance road to Anzalduas, then flew overhead, and coming up to the levee, a Black Phoebe sang from the fence line!  Both species of grebe showed in the little wetland along the entrance road, along with a flock of Black-bellied Whistling Ducks that showed off their white wing patches very nicely.  After parking past the entrance shack a Gray Hawk flew right in front of us, giving great views, and once out of the car, I heard a hoarse Chop-chop-chop and sighted a Red-crowned Parrot coming in!  He posed briefly on top of a distant tree, but not long enough for me to get the scope on him before he took off for the “back part”…  Jim and I made a fruitless hike across the field for Sprague’s Pipit, although we did have both species of meadowlark; with everything seemingly migrating early, I couldn’t help wonder if the pipits were gone already.  L


The river was much more productive, with lots of Coots, a couple of Gadwall, some Mottled Ducks, and good comparative view of both flavors of cormorant (the Double-crested even had his double crests)!  Forster’s Terns called in the background, and a Tropical Kingbird tittered on a light post, while a singing Loggerhead Shrike perched on top of a tree.  We stopped at the dam to look at the Cliff Swallow nests and enjoy a Spotted Sandpiper up on the concrete pillar, plus more cormorants behind the dam, along with an Osprey with a big fish!


Crawling down the center road, I thought I heard a buzzy trill, and turning off the car, sure enough – a parula was singing!  Trouble is, around here at this time of year, it could be either species, so we tracked it down, and it finally came out and gave us enough of a view to see the dark breast band of a Northern Parula, ruling out Tropical!  (Melanie and Jim were ready to give up, saying, “Oh, we’ll see them soon back home!)  A lady Ladder-backed Woodpecker gave us a great view at this stop as well.  We made a quick stop at Granjeño to see if we could find any Burrowing Owls; now that you’re not allowed to drive into the floodway, spotting them in the rocks is a lot more difficult, and we certainly didn’t see any this time, so we headed to the Stripes for some refreshment and then headed on to Santa Ana. 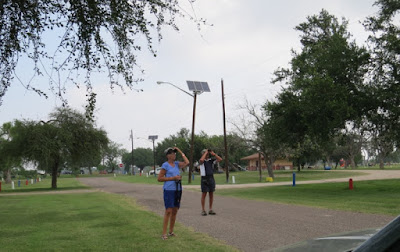 Melanie and Jim check out a kingbird at Anzalduas County Park

It was warming up by then, but things were still singing, even though they weren’t visible: their Beardless Tyrannulet called in the distance, and titmice were all over, but nothing wanted to come in and investigate the pishing.  Padded the list with ducks at Willow Lake, along with some Black-necked Stilts and a Greater Yellowlegs that a lady pointed out to us.  A little guy skulking along the ground that Melanie and Jim saw but that I missed sounded like an Olive Sparrow from their description, and sure enough, one tsipped from the stuff!  Coming back around, the Carolina Wren actually showed himself while he sang, and at the feeder area a White-winged Dove flipped his wings while he sang – that was quite the show!  Melanie admitted she was interested in butterflies, so while they weren’t as active as they were in Starr County two days ago, I was able to point out a few things such as White Peacock, Phaon Crescent, and Laviana White Skipper.  The lizards were active as well, with Rose-bellied and Texan Spotted Whiptails being the main showoffs. 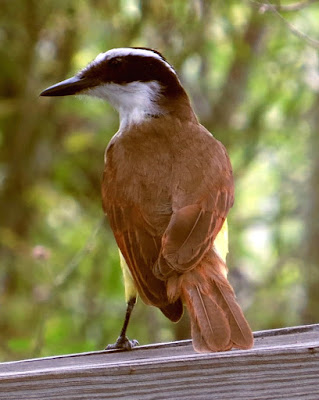 We were done for the morning, but for a half day managed to rack up an impressive 75 species!  Bird List: