Fishing for Birds (and Butterflies), Part 3

There was a big blob of red on the weather radar this morning, so I was glad we decided to head up to Salineño today where it was supposed to be dry!  By the time we got up there it had cleared up nicely, and the temperature was just perfect with a cool breeze!  Apparently a whole lotta other folks were on the same wavelength, as the place was packed with two vans of tour groups along with several lone ranger birders!  One group (that turned out to be an Eagle Eye Tours group) was already at the boat ramp and had a Red-billed Pigeon in their sights, but it’s a good thing that Ken and Keith had gotten fabulous looks last Thursday, because this bird was well hidden in the tree!  (I was happy to get it for the year, anyway…)  So while the tour river-watched, Ken and I decided to hike the trail first, and we hadn’t gone five steps it seems before his target Audubon’s Oriole teed up on a tree right in front of us!  I got him in the scope for Ken, then went back to tell the group (as this bird doesn’t always cooperate at the feeders)!  The group made a beeline, but the bird had evidently been chased away by a blackbird the minute I left! L  Interestingly, upon processing the pictures, there turned out to be two birds up there – didn’t even see the second one we were so focused on the one! 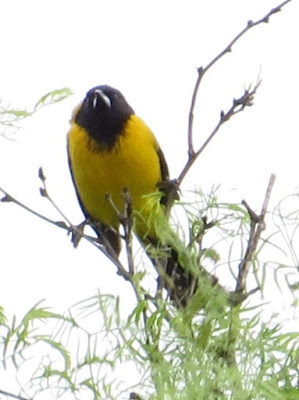 Audubon's Oriole - we didn't even notice the second bird below at first! 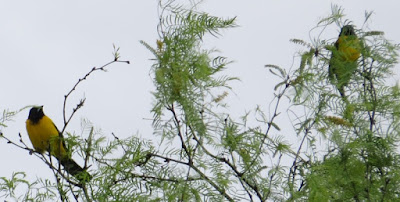 So the gang decided to continue on the trail while Ken and I went back to the boat ramp and set up watch.  More people trickled in here and there, and by that time the pigeon had slunk away inside the tree.  A Pied-billed Grebe was hauled out on a rock, interestingly, and was eventually joined by a Green Kingfisher!  (The grebe seemed okay as he occasionally got in the water to bathe and dive, then got back on the rock…)  The Ospreys were about along with the ever-present Spotted Sandpiper and both cormorant species, and a flock of Gadwall floated along as well.  The only other raptors we had were both flavors of vulture and a couple of Caracaras, and we did see a distant kingfisher rowing over the island’s horizon before going the wrong direction, but couldn’t get a definitive look.  Before long Mary Gustafson emerged from the trail with a couple of clients; she did report a Ringed Kingfisher they flushed off a snag (which made me think that was probably the same bird), but they couldn’t find any seedeaters.  Skye (the guy leading the tour) came back and reported the same thing, but we waited it out the whole hour before heading up the trail ourselves. 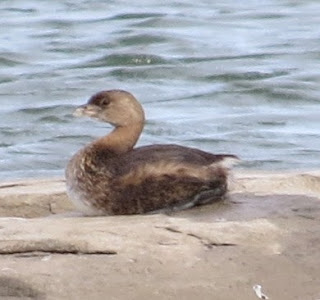 Pied-billed Grebe uncharacteristically hauled out on a rock (you can see how far back on his body his legs are attached)!

He doesn't seem to mind sharing his rock with a Green Kingfisher, however!


It was pretty quiet going in, with most of the action being at the cul-de-sac:  a male Vermilion Flycatcher was pretty tame, and a Kiskadee came out to investigate, but that was pretty much it.  On the way back, however, I heard a crac….crac… and stopped Ken in his steps – the Ringed Kingfisher was flying by!  He saw enough to tell it was a large kingfisher and could tell the flight call was different from a Belted, so that was good enough for him! 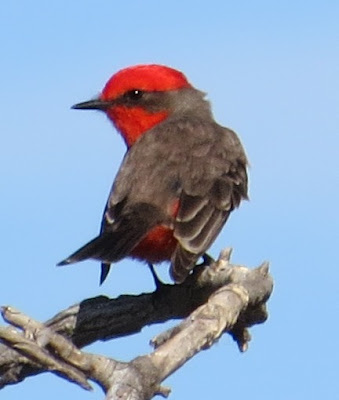 
Not needing to sit at the feeders for the oriole (he figured it was probably gonna be a tight fit in there today anyway), we headed down Dump Road in hopes of sparrows.  The wind was starting up, so things were low (got a chattering Pyrrhuloxia, but that was about it), therefore we continued on to Falcon State Park to check the butterfly garden.  Ken was anxious to learn new butterflies, so we saw several expected species including Black and Giant Swallowtails, Empress Leilia, both Vesta and Phaon Crescents (along with a little Elada Checkerspot), Funereal Duskywing, Southern Dogface, and several Queens and sulphurs. 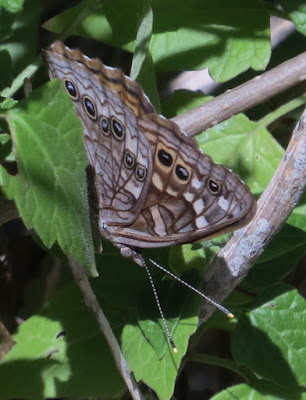 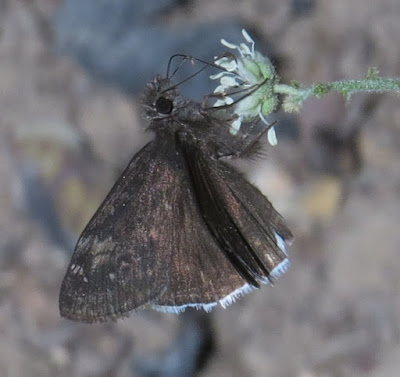 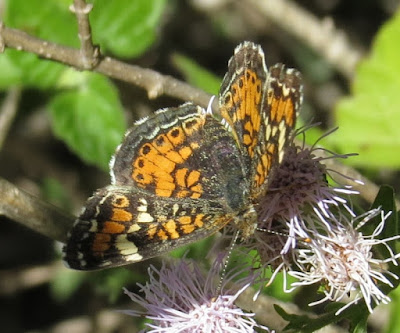 Phaon Crescent (above and below) 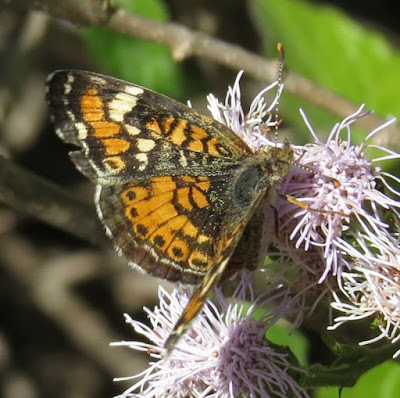 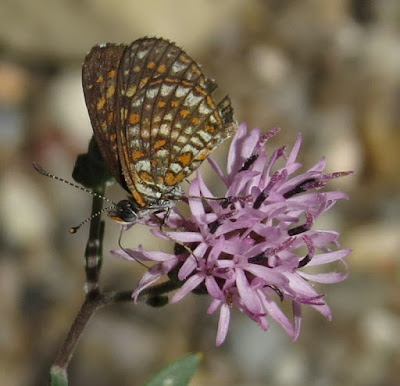 Elada Checkerspot (above and below) 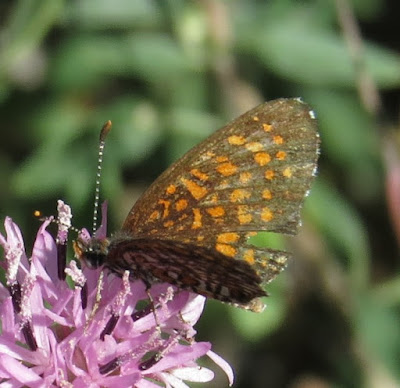 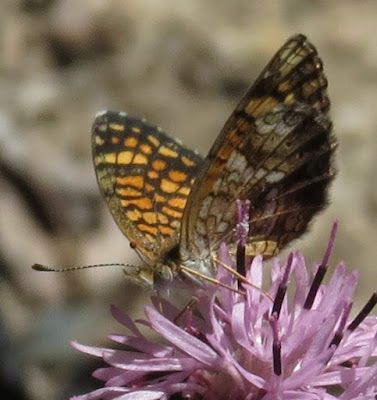 The similar Vesta Crescent (above and below) 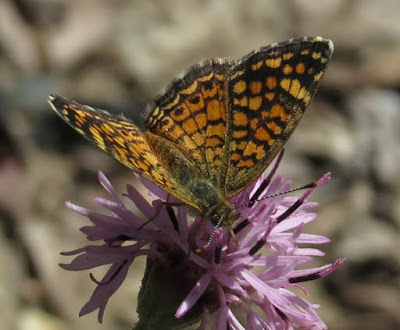 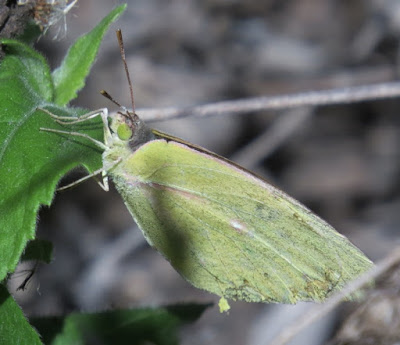 By that time we both agreed that wandering the back roads in search of sparrows probably wouldn’t be very productive, so Ken readily agreed to head over to the National Butterfly Center for more butter-hunting!  Even though it was breezy, the temperature was just perfect, and the place was alive with stuff:  in the Sunken Gardens we had both Zilpa and White-striped Longtails, several Black and Giant Swallowtails, Dusky-blue Groundstreak, Silver-banded Hairstreak, and Checkered Whites.  Luciano had suggested we cut over to the Walking Trail at the halfway point, and along there we had lots of Red Admirals and a single South Texas Satyr on a bait log. 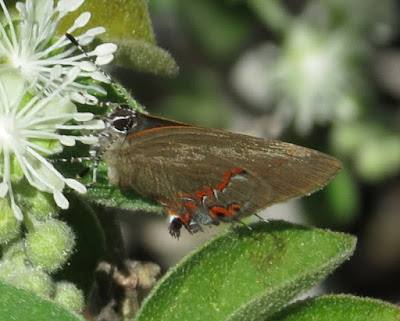 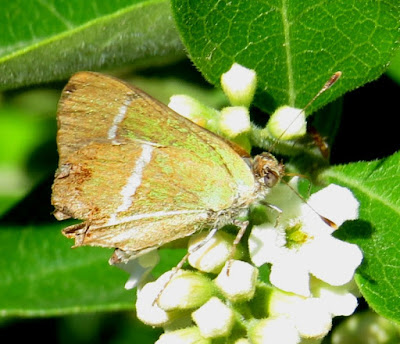 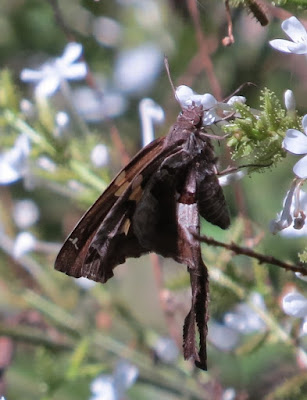 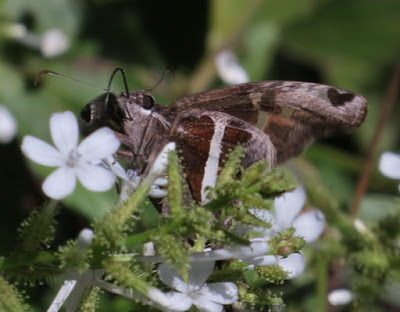 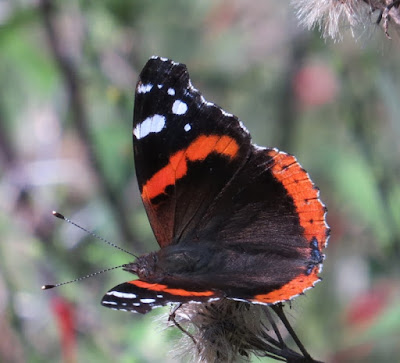 Once down in the old main garden we sat at the feeder area for a while, enjoying the common birds, then hit the gardens again, being overwhelmed by the butter action:  Ken’s coveted Zebra Heliconian finally came by and gave us a show, along with a Julia and Gulf Fritillaries.  A rare Double-dotted Skipper was uncooperative for photos, but a male Chestnut Crescent made up for it!  It was hard pointing out the little guys, but we had plenty of Clouded and Fiery Skippers along with the occasional Whirlabout and Sachem.  Bordered and Crimson Patches were a hit, and finally the Mexican Bluewing showed off as we started back, along with a beat-up Band-celled Sister!  I told Ken that one has to see the Valley’s signature butterfly, especially since it’s painted on the Mission water tower! J 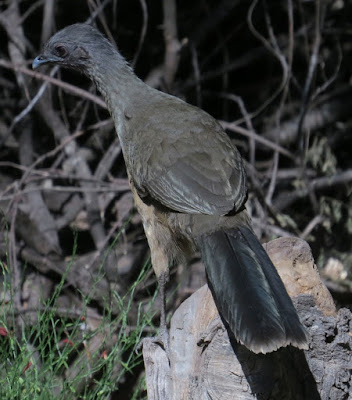 Chachalaca (above and below) 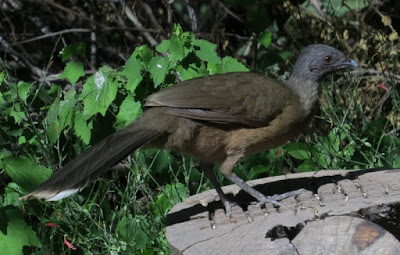 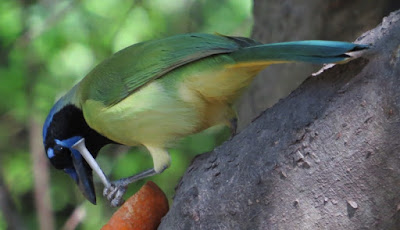 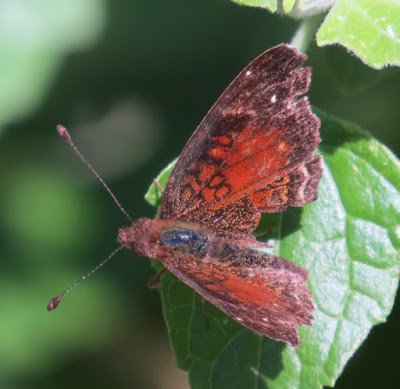 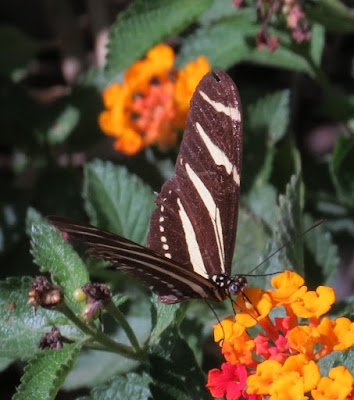 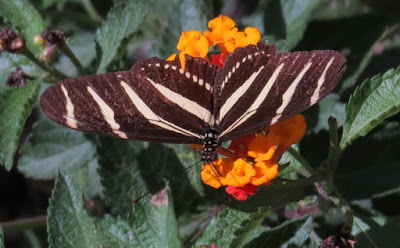 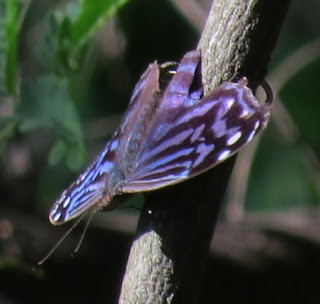 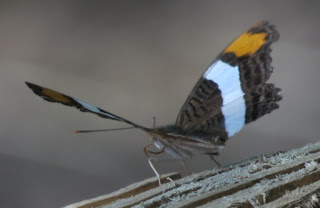 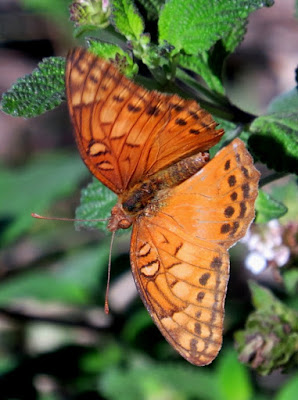 Headed home with a meager bird list, but the quality of both birds and bugs couldn’t be beat (birds beat out the bugs by only two species)!