Things worked so well Thursday by doing Estero first that I decided to do the same thing this morning with Ken, a former Fish and Wildlife guy (and professional fisherman) from Alaska, as again, many of his target birds could be gotten there, so we headed over through the fog first thing, and were surprised to find that another group had just beaten us there!  We let them get ahead of us a little, but we hadn’t gotten far before we heard a Couch’s Kingbird doing his sneezy dawn song!  The other group had obviously found him, as numerous camera lenses were pointed in that direction J, but we eventually got up to where he was sitting on a wire, at which point he darted out and caught himself a huge White-lined Sphinx moth for breakfast!  That was a hoot! 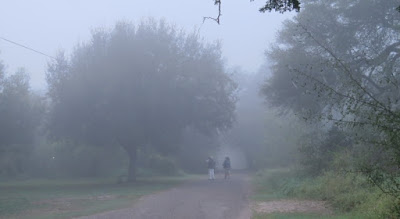 Foggy morning in the Tropical Zone 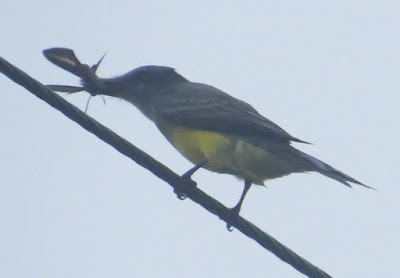 We checked on the Screech Owl Stump with no Screech Owl, then settled on the benches by the Pauraque Hall Drip for 15 minutes to see what would come in.  The Feeder Guy had just put out the food, and the Chachalacas were all over the platform feeder like a bunch of chickens!  They eventually came over to where we were, along with three White-tipped Doves.  A pair of Clay-colored Thrushes were overhead, but unfortunately the only look Ken got was as they took off! L Like on Thursday, the Black-bellied Whistling Ducks only provided fly-over looks.


After the group moved on we moved over to the picnic table to watch those feeders and drip, and enjoyed more White-tipped Doves, Golden-fronted Woodpeckers, and Green Jays, but after a while I heard a little squeal, and by golly if the becard hadn’t shown up his tree!  I got Ken on him and he got a great look, and thankfully the other group heard the commotion and came back so they could get a look as well (the little guy was pretty active)!  My friends Alicia and Linda from Harlingen suddenly materialized (they were there for a Master Naturalists class), and they eventually got looks, too! 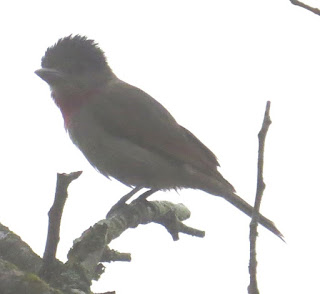 Fuzzy-headed becard through the fog Ken enjoying the atmosphere of the Tropical Zone

We then decided to make the loop in hopes of refinding one of the thrushes or a feeding flock with warblers; it was pretty quiet (although we did hear an invisible Buff-bellied Hummer), so we headed on to the deck, where the morning bird walk was getting ready to roll.  After getting ourselves checked in the group had moved on, so we checked out the ducks and the hummer feeders, picking up an active titmouse, but that was about it.  We overtook the group and hightailed it to Alligator Lake, picking up some territorial Least Grebes in appropriately-named Grebe Marsh, along with the Vermilion Flycatcher, and got Ken’s Yellow-crowned Night Herons with no trouble.  We could see that another couple had already found the Pauraque, and this time he was in a better viewing position (plus, the second bird was also visible)!  The owl was another no-show, and we couldn’t find any kingfishers at the overlook, but another couple had spotted a close Curve-billed Thrasher that was feeding in a tree! 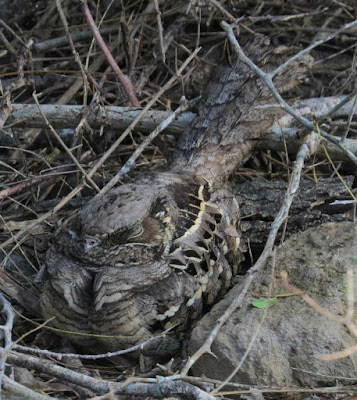 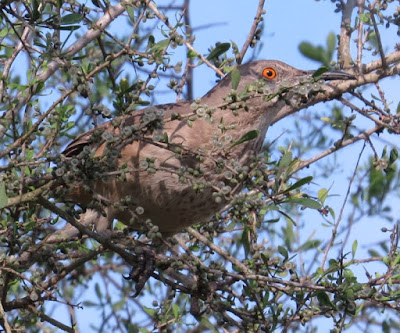 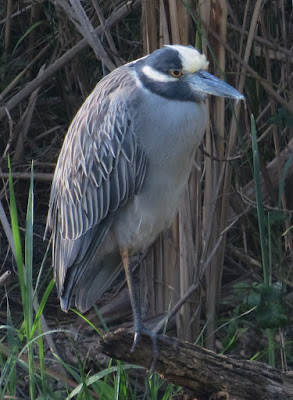 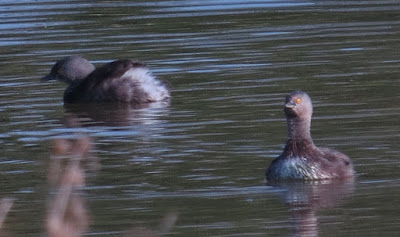 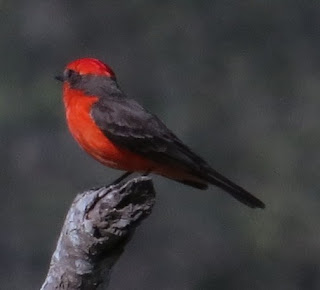 We took the long loop back in hopes of picking up some sparrows, but nada; the pretty Cinnamon Teal was in with some Bluewings at Dowitcher Pond, and a clean-breasted Eastern Phoebe showed off at Curlew Pond.  Coming back by way of the boardwalk allowed stunning looks at the ducks, including Ken’s life Mottled Duck!  After a break on the deck where we enjoyed some Roseate Spoonbills that had just arrived and schmoozed with the Master Naturalists and Dr. Tim Brush’s ornithology class, we headed towards the parking lot, but since Ken was definitely interested in butterflies and they were starting to fly, I pointed out a White Peacock that was harassing us on the boardwalk, plus all sorts of little guys near the brick walkway including a Sachem, Brown Longwing, Funereal Duskywing, Vesta Crescent, and tons of Queens!  Mike had told me that Rick and May had male Chestnut Crescents in their garden, so we stopped by there, and sure enough, one finally showed up amongst the similar Texan Crescents!  Someone told us about a Red Rim back at the VC, so we went running back, but couldn’t find him. L  A Northern Beardless Tyrannulet teased us, however, but at least Ken’s lifer White-eyed Vireo decided to give us a look! 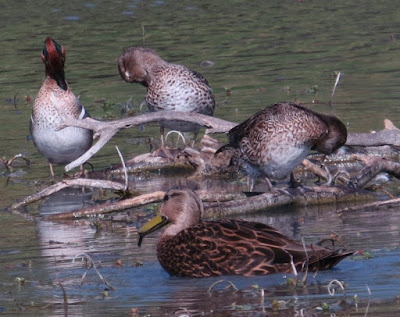 Ken's life Mottled Duck poses next to some Green-winged Teal 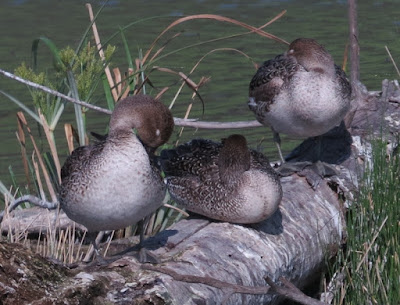 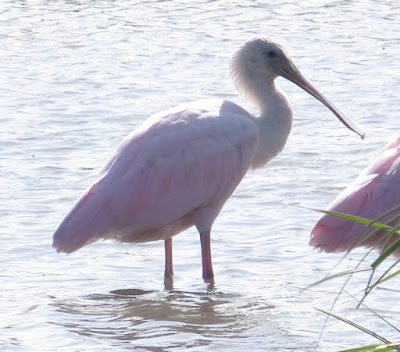 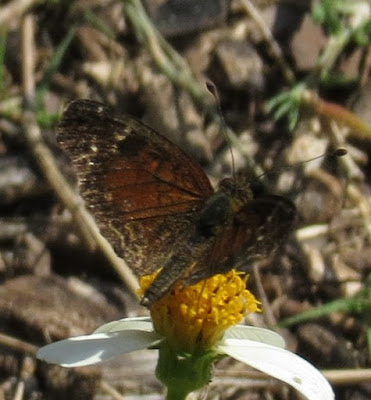 After a quick search of the parking area for the reported Tropical Parula, we headed on to Santa Ana, but not before making a quick stop at the Progresso Silos for Bronzed Cowbird!  We finally found a couple of “Darth Vaders” along a wire amongst the hundreds of Red-winged Blackbirds and Brown-headed Cowbirds, and we even picked up a handful of Yellow-headed Blackbirds, which is a good bird to see in the Valley.  Continuing to Santa Ana, we planned just to eat lunch at the feeders, as it was getting rather warm to hike out to Pintail Lakes for the Virginia Rails.  We made a side trip up Border Road in hopes of Sprague’s Pipits, but got Horned Larks and a Harrier instead, and a great show of Turkey Vultures, White-tailed Hawks, and a young Caracara that were cleaning up after a cane burn!  Ken was gratified to see so many Kestrels, as their numbers have diminished in Alaska due to the use of pesticides. 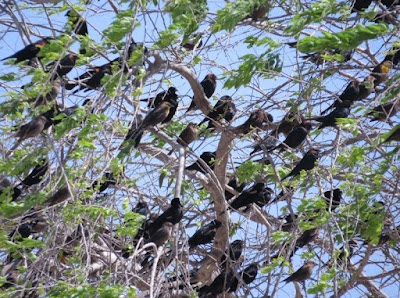 Can you pick out the Yellow-headed Blackbirds?

We were not prepared for what turned out to be Winter Texan Appreciation Day at Santa Ana – the place was mobbed!  But we did manage to see a Buff-bellied Hummer come in to the feeders while eating our sandwiches, after which we decided to head on to Anzalduas.  But first we stopped at the Old Hidalgo Pumphouse, as Ken was also interested in local history and enjoyed reading about the pumphouse’s past!  We picked up a calling Tropical Kingbird in the parking lot and a nice Black Phoebe at the overlook, then headed over to the residential neighborhood to bag the Monk Parakeets. 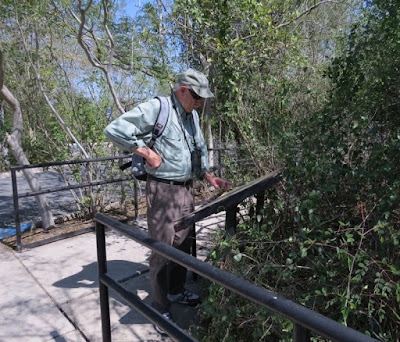 Ken at the Old Hidalgo Pumphouse 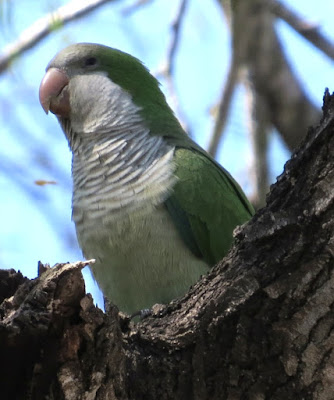 
From there we headed to Anzalduas, and hoping we wouldn’t have to hike too far into the field, we set out to find the Sprague’s Pipit, and finally had one that popped up and called (but wouldn’t sit for us of course)!  It was really way too hot to walk around, but we did check out one of my favorite groves where Ken spotted a Green Kingfisher in a tree!   We cruised and listened for feeding flocks after that, picking up Eastern Bluebird, House Finches, and some Ruby-crowned Kinglets, but it was pretty quiet.


With what time we had left we cruised the Old Military Highway and Levee and really didn’t add anything new, but it was a road I sometimes got Ringed Kingfisher and Gray Hawk on, both of which would have been life birds.  It was almost 90 out, so we decided to call it a day and head home, but not without having racked up 82 species for the day!