A Cool Place on a Hot Day

Since returning from Costa Rica I hadn’t had a chance to get out birding (except around the neighborhood), so I was anxious to at least join Arroyo Colorado Audubon’s (ACAS) Birder Patrol and see my friends as we all descended upon Dan Jones’ yard in Progresso Lakes!  The temperatures were forecast to reach triple digits once again (it’s been that way for almost a month), so we figured that sitting in the shade of his back yard overlooking Moon Lake Resaca for a couple of hours would hit the spot!  Steve and Kathy joined me in Alamo and we headed over to Progresso Lakes; they actually took their own cars in case we all wanted to go our separate ways from there, so they followed me in.  I lowered my window along Moon Lake Drive and added a beenting Common Nighthawk and tons of Dickcissels singing in the fields!


Pulling into Dan’s drive, Norma, Sue, Billy, Alicia, and Mark (ACAS’ new conservation chair) were already there, so having brought our lawn chairs we settled down to watch the show.  A Black Phoebe was up on the wire, and five Green Herons chased each other up and down!  A real treat was a Least Bittern flying back and forth, and a pair of Muscovy Ducks apparently nesting on top of a thick, dead palm tree!  Purple Martins were all over, and even a Bank Swallow called.  Both Couch’s and Tropical Kingbirds song-battled, and I thought I heard (and Billy thought he saw) an Eastern Kingbird, but without another good “listen” I wasn’t willing to say for sure, especially since eBird would have flagged it.  Eventually during the course of the morning both Green and Ringed Kingfishers shot by, a Yellow-crowned Night Heron briefly showed, and an Anhinga sailed past!  A Spotted Sandpiper bobbed across the way while a handful of Black-bellied Whistling Ducks flew over (a far cry from the mobs that were there last winter)! 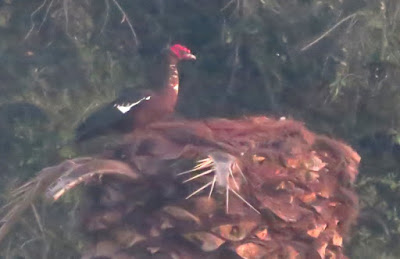 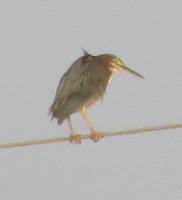 One of several Green Herons 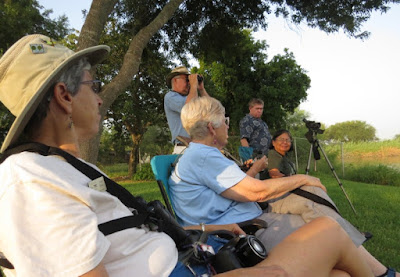 Some of us decided to walk down to the end of the road just to stretch our legs and see if anything else was about; an Olive Sparrow was singing from the woodland edge, and at one point a Yellow-billed Cuckoo went tearing past and landed for a look!  The neighbor’s friendly lab mix accompanied us while the girls gave me a crash course on some of the trees there (and I’ll need a lot more practice for sure). 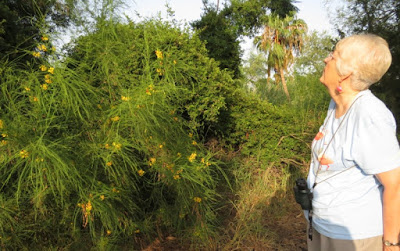 Norma points out a Retama bush 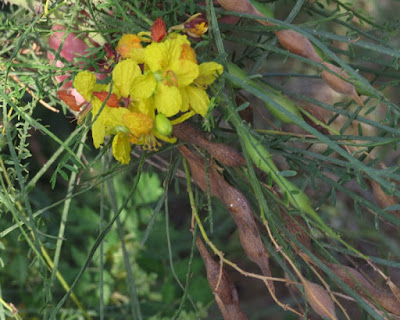 Retamas bloom late in the summer and have multiple bean pods, in addition to long, skinny leaves. 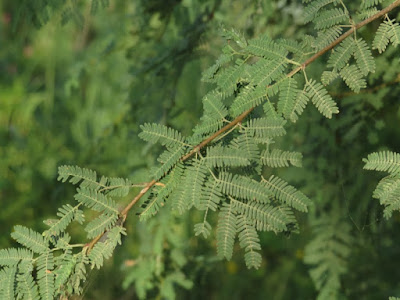 Huisache, which blooms early in the spring 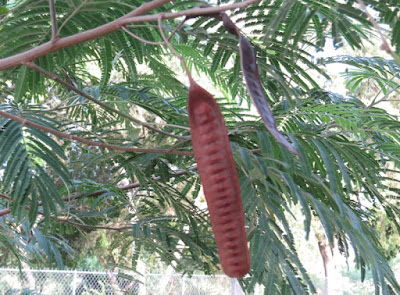 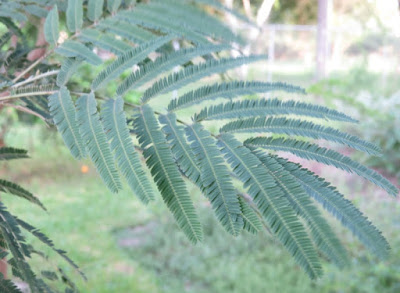 Close-up of the Tepehuaje leaves

Returning to the yard we saw that Dan had joined the guys that stayed behind; he had forgotten we were coming and opened up his curtains to see a mob of people in his back yard! J  Billy was jokingly giving Dan a hard time for not producing a Clay-colored Thrush (he said that was the whole reason he came J), when suddenly the thing darted out of a tree and across the resasca!  We commented that his butterfly bushes were coming along nicely, and already his Pyramid Bush had some Clouded Skippers on it.  Just before we left Dan was showing Alicia the pods from his deceased yucca plant that could be used to make “babies”! 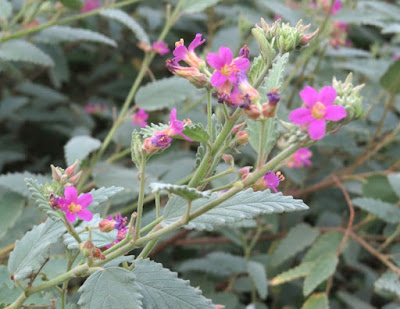 Some of the gang continued on to Tiocano Lake to look for King Rails, but I had too many chores to do so headed home.  I ended up with a modest but very high quality list of 40 birds for the morning!  (And later I found out they had a lingering Sora there!)  Bird list: