Last Friday I took visiting birder Barry from Kirkland, Washington (who had been birding on his own the whole week before) up to the La Sal del Rey area to look for sparrow-type things (and he really wanted to see a Pyrrhuloxia, too).  Turns out he keeps up a blog as well, so he very kindly allowed me to post it here, giving me a bit of a reprieve!  (He sends these out to friends and family, hence the occasional reference to past posts...)  I may put in an "Editor's Note" here and there to clarify things... :-)


Today was an excellent day of birding, and a very long one.  I had hired a bird guide for the day, and she picked me up at 9 this morning.  I got back here to my room at 7 PM, so it was a ten hour birding day for me today.  It was somewhat overcast this morning, which held the heat down.  It got up into the low 80’s by the end of the afternoon, but I did pretty well with the heat.  Our plan today was to be in the car most of the time, with frequent stops to get out and listen and look for birds.  My guide, Mary Beth, is excellent at hearing and recognizing bird calls, and she heard about twice as many birds as I counted.  That is, two times as many species – probably ten times as many individual birds or more.


We headed north out of McAllen into the boonies and started our day along Brushline Road.  Here is a picture of one part of Brushline Road, to give an idea of the habitat we were in. 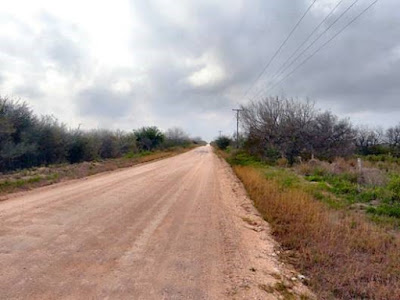 It was very dry for the most part.  To finish setting the scene, here is my guide, Mary Beth. 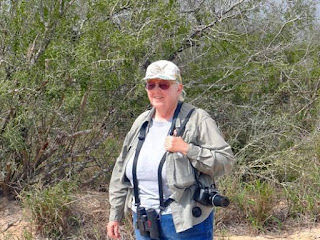 One of the birds I had wanted to see was PYRRHULOXIA, a relative of cardinals.  We saw them a number of times, and this was the best picture I got a [male] Pyrrhuloxia. 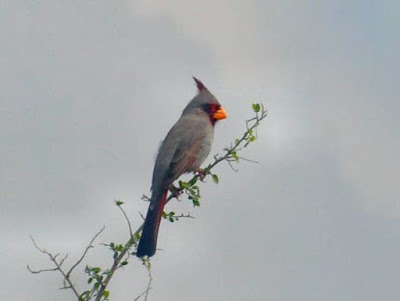 I had only seen that species 2 or maybe 3 times before, and I’m sure I saw more today than all the ones I had ever seen previously. 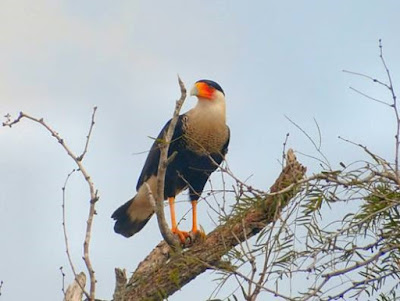 We saw a lot of Crested Caracaras today, and here is a picture of one that posed for us.

I didn’t need it for Friday because I had seen them a week ago over near Brownsville, but I think they are a handsome bird, so I like getting pictures of them.  [Ed. note:  Barry keeps "day birds" lists in order to keep the game interesting!]  Here is another Crested Caracara that we saw later in a field. 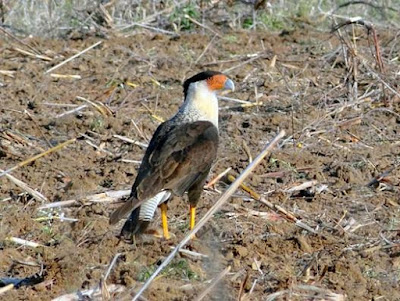 So, there you have the front view and the back view of Crested Caracara.


We saw dozens of Mourning Doves, and I needed that one for Friday.  We heard and saw HOUSE WREN several times, which I liked, but I never got a picture.  As a reminder, when I show a species in ALL CAPS, it means it is the first time I’ve seen that species this year.


At one stop we heard and saw three SANDHILL CRANES flying over the road.  I wish I had been able to get a picture, but I’m using my old 30X zoom camera and I’m not used to it, so it takes me a long time to get ready to take a picture.  I missed my broken 50X zoom camera today.  When I get home, a new camera is high on my list.


Another bird I really wanted to see was White-tailed Hawk.  I had only seen that species three times before today, and we saw them several times today.  Here is a picture of one overhead. 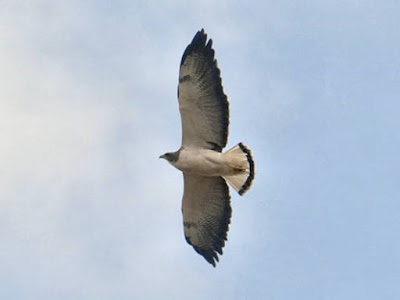 Mary Beth heard thrashers at various stops, and I saw both Long-billed Thrasher and Curve-billed Thrasher before the day was over, both excellent Friday birds.  We had Lark Sparrow several times and a couple of American White Pelicans flew around ahead of us and gave us good views.  At a pond Mary Beth spotted a Greater Yellowlegs, so that one went on my Friday list.  On our way back, by that same pond, I spotted my first HERMIT THRUSH of the year, and got this picture of it. 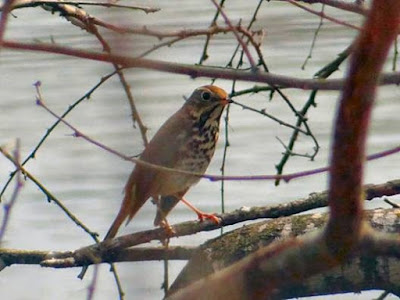 I think the blurry line down through the picture to the left of center was due to the wire in a fence, way out of focus.  Either that or it was a branch.


We saw a GREATER ROADRUNNER run across the road ahead of us, thus fulfilling its name.  Another of the species I had especially wanted to see was BLACK VULTURE, and finally we got onto a group of 4 or 5 of them.  I got one mediocre picture of one overhead, good enough to identify the species, anyway. 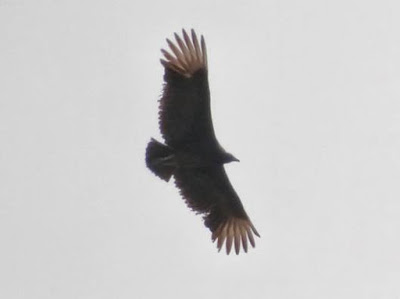 We saw WILD TURKEYS three separate times – two groups of about a dozen and one smaller group of 3 or 4.  Here are some of the Wild Turkeys. 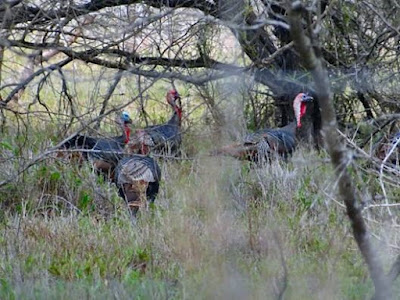 We saw Loggerhead Shrikes 3 or 4 times, and here are the two best pictures I got, front and back. 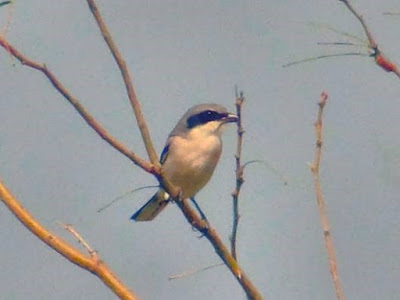 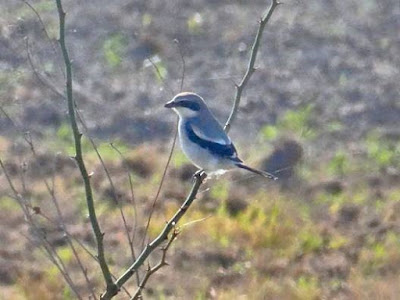 I missed my broken 50X zoom camera today, but this old one did a satisfactory job as a backup.


Mary Beth had heard of a report of a flycatcher out on one of the roads we were on, and it is uncommon to rare out here.  We actually found it and got pictures of the SAY’S PHOEBE. 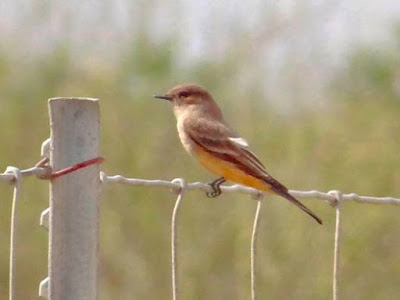 We had a group of Western Meadowlarks at one or two points, and I needed that one for Friday.  We also had a RED-SHOULDERED HAWK give us a good close flight view, but there wasn’t time for a picture before it was gone.


We saw and heard Yellow-rumped Warblers a number of times, and Mary Beth heard a Couch’s Kingbird at one point, and eventually we were able to entice it to fly in closer and I got an excellent look at it.  We also saw a couple of Common Ground-Doves at one point, so that one went onto my Friday list, too.


So, that was most of our long day of birding.  It was about 5:15 by then, and we needed to head for the parakeet roost, so I could get an almost-lifer.


At the McAllen parakeet roost we got there just in time to see the GREEN PARAKEETS lining the wires near the intersection where they were supposed to be.  There must have been 5 or 6 dozen of them, and more nearby.  The light was poor by then, and we were looking up into the sky at a distance, because the wires they were on were high ones, but I took some pictures.  The pictures are pretty crappy, but at least they show this almost-lifer that I only saw once before, and that was a quick fly-by.  Here are my best two pictures of Green Parakeet in the fading light. 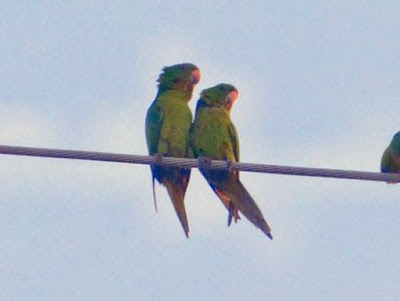 Those two were kind of cozying up to each other, and I thought it was cute. 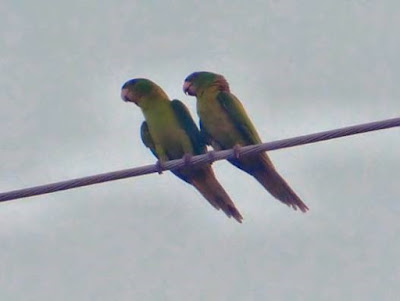 In addition to the parakeets that were gathering for their nightly roost together, there were thousands of Great-tailed Grackles congregating in the area.  Here is one small part of the Grackles gathering on the wires. 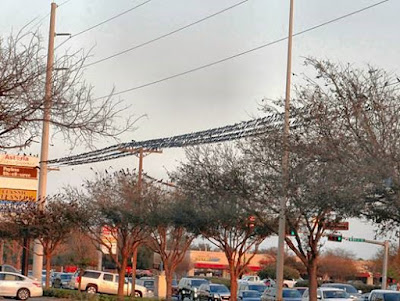 There were at least ten times that many around the area, and they made quite a racket, as they call very loudly.  Here is a closer view of that telephone pole in the middle of the picture above. 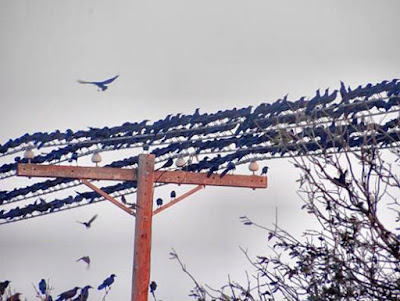 It was getting dark by then, so we headed back.  The birding wasn’t over yet, though.  As we waited at stop lights in the heavy rush hour traffic, I saw several Bronzed Cowbirds on the wires with the grackles.  That was an excellent one for my Friday list, and my last bird of the day.


So, it was an outstanding day of birding, and I saw much, much more than what I would have seen on my own today.  It was also nice to have company all day, after nine days of birding alone and talking to almost no one.


I added 24 birds to my Friday list, to bring it to 131, which puts it way ahead of all the other days.  A whopping 11 of those birds were new for my year list, too, to bring me to 220 for the year.  If you’ll remember, yesterday I barely eked out one new year-bird, by a fluke at the end of the day (the Northern Rough-winged Swallows), and today Mary Beth was able to show me 11 more.  Outstanding.  For my BAD bird today, I’m going to take Olive Sparrow.  I didn’t mention that one before because it wasn’t a Friday bird – I had seen one briefly last Friday at Sabal Palms Sanctuary.  Today I got great, though brief, looks at two of them, so I’m taking it as my BAD bird today.


It was a long day, and I probably overlooked something here, but it’s late, and I want to get this out tonight.  Tomorrow I fly home from San Antonio, and it is a four hour drive to get to the airport from here.  The flight doesn’t leave until 6:40 PM, so I have all day, but I’m sure the time will fly by.  I’ll have to get all packed up in the morning, and I want to at least make a token effort to get a new year-bird tomorrow.  As it turns out, Mary Beth was able to tell me where a parakeet that I have only seen once before nests [Monk Parakeets], and I plan to stop by that area tomorrow morning on my way out of town, and maybe I can get that one for my new year-bird tomorrow.  If not, then tomorrow will almost certainly be the day my streak ends.  [Ed. note:  he got them! :-)]


Whatever happens with the silly streak, tomorrow I head for home after an excellent trip, and it will be very good to be home, as always after a trip, no matter how long.

...and the checklist for the South Brushline Road portion:

Posted by Alamo Inn B and B Gear and Tours at 9:58 AM No comments: