Mary from Portland, TX (whom I had birded with last spring at South Padre), talked her friend Luanne from South Dakota into coming down to the Valley for some fall birding, and since Luanne was a new birder and this was her first time to South Texas (as a birder, anyway), everything was new (which makes it easier on the guide :-))!  On Saturday we decided to focus on south Hidalgo County and started with Bentsen Rio Grande State Park.  I warned them that the specialties are much easier to see after they start feeding the birds in November, but even so we managed great looks at Green Jay, both Ladder-backed and Golden-fronted Woodpeckers together, and a gorgeous Altamira Oriole!  Couch's Kingbird also showed well, but the Olive Sparrow was elusive... 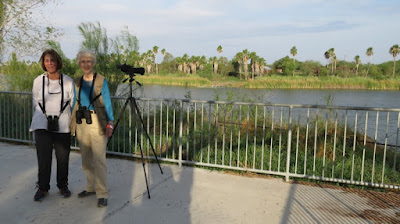 Mary and Luanne at Kingfisher Overlook

From there we headed over to Anzalduas via Old Military Highway, and we hadn't gone far before we spotted a big, beautiful female Ringed Kingfisher sitting along the levee!  She allowed great looks and wasn't fazed a bit by all the Border Patrol vehicles whizzing by her on the levee! :-) 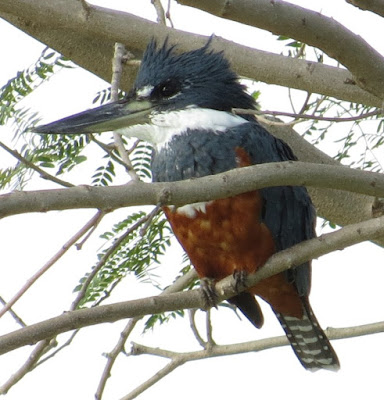 Anzalduas was a little disappointing in that it didn't produce the specialties I was hoping for (at least by sight - we heard both the Black Phoebe and Tropical Kingbird), but the consolation prize was a noisy Osprey and a cute little subadult Vermilion Flycatcher!  We startled a roosting Black-crowned Night Heron along the little "Dam View Trail" (he stayed put long enough for everyone to get views), then made a quick stop to see if the Burrowing Owls had arrived yet (they hadn't).  After that we headed straight for Quinta Mazatlán (actually, we may have hit Tony Roma's first :-)), where we did manage to see the target Chachalacas and Clay-colored Thrushes, but my personal highlight was an Owl Moth that we flushed, and then which thankfully landed on a tree!  Butterflies were plentiful by the Education Center, with a nice Julia Heliconian showing off. 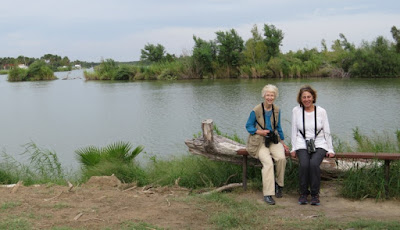 Along the Rio Grande at Anzalduas County Park 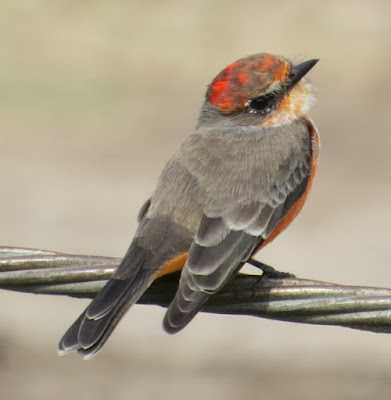 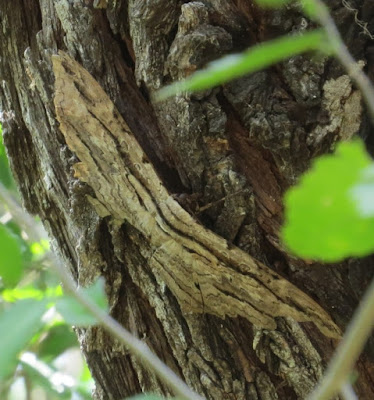 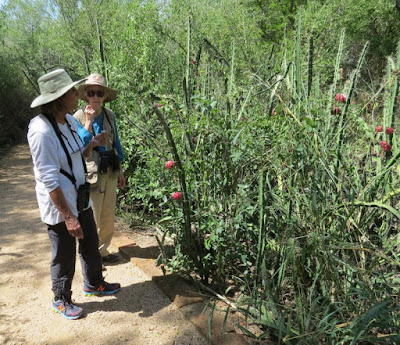 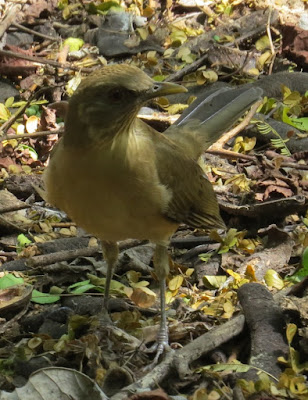 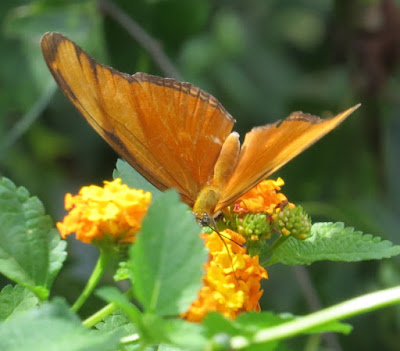 With what time we had left we elected to head to Estero Llano Grande State Park, which is always a great place to go in the afternoon as the lighting is perfect for viewing Ibis Pond!  This day it had several snoozing Blue-winged Teal, along with a White-faced Ibis alternately feeding and preening (this turned out to be Luanne's favorite bird of the trip :-))!  We headed straight out to Alligator Lake, pausing to check out some yellowlegs at Dowitcher Pond, but alas, we couldn't find the Pauraque (Park Host Huck DID warn us that he didn't see it that morning), nor was the Screech Owl out, but we did see a nice adult Yellow-crowned Night Heron, and the Alligator was a big hit! 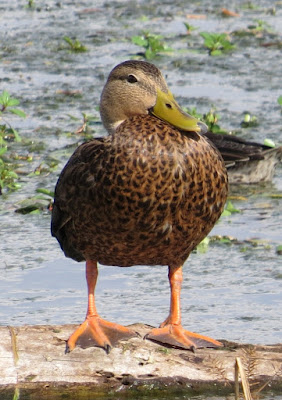 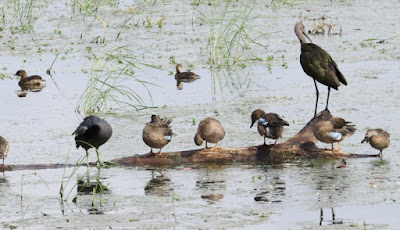 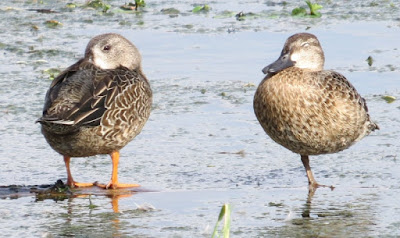 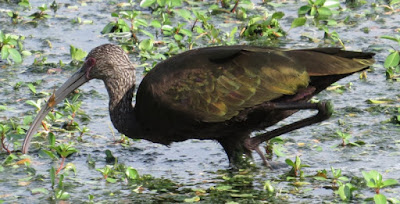 The next day we headed out to Cameron County, with the first destination being Old Port Isabel Road.  We were greeted right away with a covey of Bobwhite and lots of Eastern Meadowlarks and Long-billed Curlews, but I was sweating a little when the Aplomado Falcon wasn't at his appointed spot near the nesting platform!  Thankfully we didn't have to go far before we spotted him near the top of one of those high-wire towers, and he even performed by darting out and catching a dragonfly for breakfast!  Harris' and White-tailed Hawks also showed off nicely, and we managed nice views of Cactus Wrens, while other "western" specialties (like Verdin and Bewick's Wren) were most uncooperative.  A Wood Stork sailed across the road, and we had nice studies of Cave Swallows in with all the Barnies on the wires!  The road itself lived up to its reputation, and the north end especially was in HORRIBLE shape (but thankfully dry, so we were able to get through)!  I told the girls they could now say that they survived the infamous Old Port Isabel Road! :-) 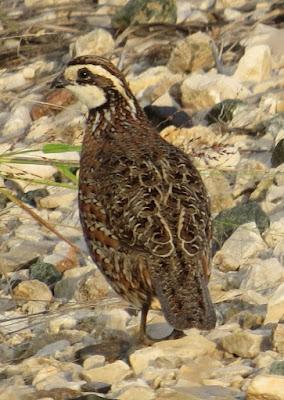 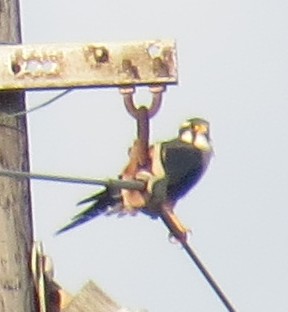 Distant view of an Aplomado Falcon 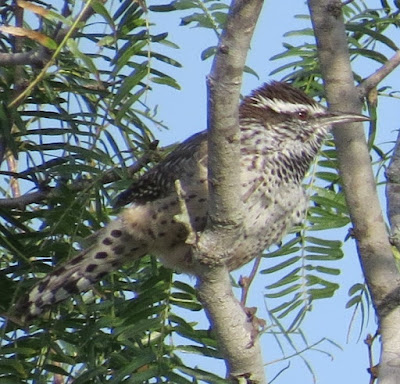 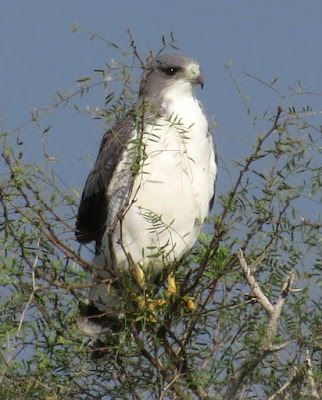 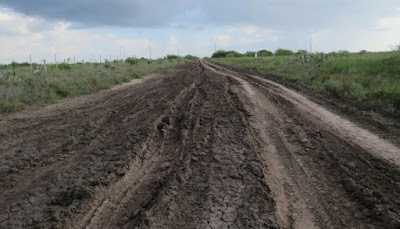 Thankfully it was dry...

Having survived that, we headed straight over to South Padre Island, where we first checked the condos for the wintering Peregrine (a no-show) then hit the bayside flats for water birds.  The water level was not low but not high, either (we watched a van go plowing through the water to get to the other point), but there was a nice collection of birds to the north that we could get closer to by skirting the edge, which we did.  The girls enjoyed great looks at a dancing Reddish Egret, skimmers, several types of terns (including a Common), a nice Franklin's Gull in with all the Laughings (we were keeping an eye out for a reported Sabine's that was hanging around various places around the Island), and my personal favorite, the cute little Piping Plover! 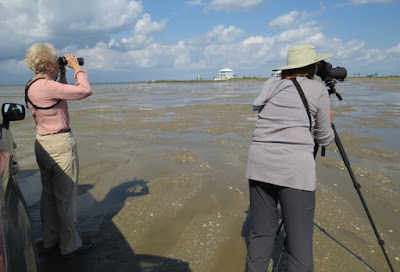 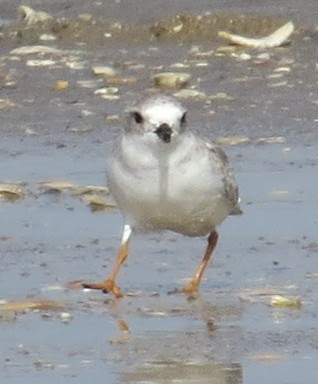 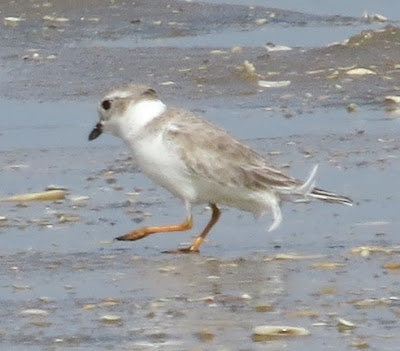 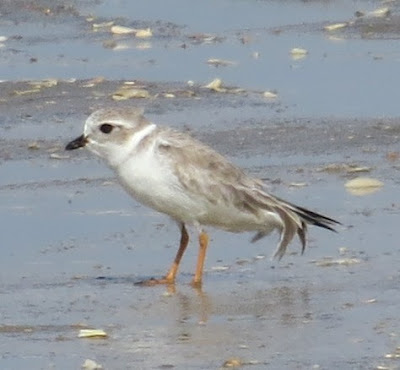 View of the flats 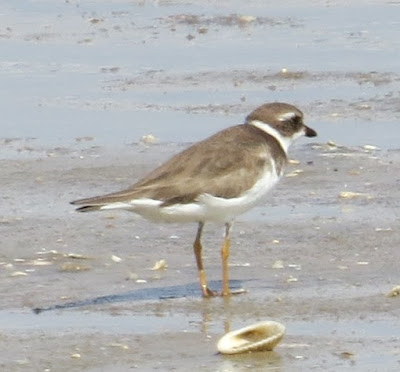 Semipalmated Plover, similar to the Piping but the color of "wet sand".

Headed over to the Convention Centre after that, and as Dan Jones reported, we had to work hard to find the migrants!  Mary had been with me last spring when she remembered "hundreds" of Magnolia Warblers and other migrants, but it was quite different today!  We found a Catbird by the water feature, and several Indigo Buntings (that were not "indigo" to Luanne's chagrin) carried on in the scrub.  We did have our first Orange-crowned Warbler of the season along with a Tennessee Warbler, and a nice man with a Big Gun alerted us to the presence of a Clay-colored Sparrow, Northern Waterthrush, and Scarlet Tanager, all of which we eventually saw (Mary found a Swainson's Thrush that the rest of us missed)!  We took a quick jaunt out to the boardwalk where the resident show-off Common Gallinules performed as expected :-), and the Clapper Rails sounded off, but it was pretty quiet otherwise (except for a nice Tricolored Heron that landed in front of us). 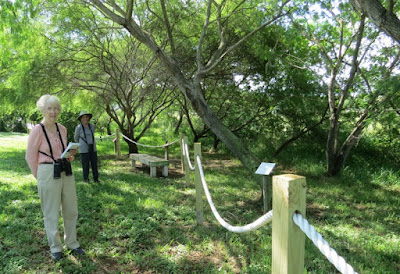 Luanne and Mary in the back of the Convention Centre 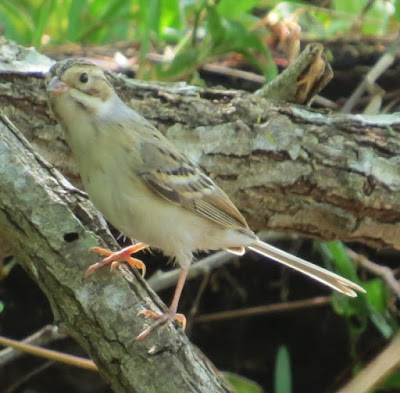 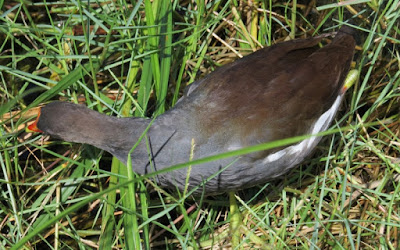 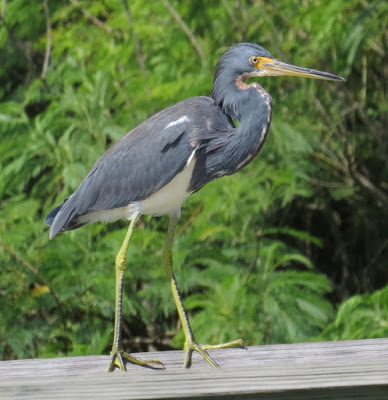 After lunch at Parrot Eyes (great fried fish) we checked out Sheepshead, which had a few things like Least Flycatcher, Blue-headed Vireo, Nashville and Magnolia Warbler, and American Redstart.  After checking out the flats at Pier 19, we made a brief stop at the Highway 48 Boat Ramp for the American Oystercatchers, then called it a day (but not without stopping at Stripes for a F'Real milkshake :-))!