Of Migrants and Falcons

Jim and Sue from Washington State had already spent a few days at the Island (and gotten a ton of lifers – in fact, according to their report, it’s very possible that we were all together during Lizzy’s Bell’s Vireo experience and didn’t know it J), so they wanted to go someplace close, as their desire was to see as many different places in the Valley as they could.  So with an early morning thunderstorm rolling through, I opted to take them to Frontera with hopes that the system would down some migrants, and as it turned out the rain was long over by the time we set out!


We got there before the gate was open, so we walked in “the back way” just as a Red-crowned Parrot called and zipped by in the distance (which they would do all morning).  We sat at the water feature for a bit, but it was surprisingly quiet (a Rose-breasted Grosbeak was squeaking and things were seeping, but not showing themselves).  When Chris showed up and opened the gate, I went ahead and parked in the lot, and by the time I caught up with Jim and Sue they had seen three thrushes and something else I can’t recall, but things were starting to move!


We headed on in to the woods, and both Jim and Sue were great spotters:  right away they found a little guy that turned out to be a Canada Warbler, and as we approached the Payne Pond a Clay-colored Thrush serenaded us and shot back and forth across the trail enticingly!  A Black-and-white Warbler showed up about then, and at the little Resaca before the Big Pond a female Green Kingfisher sat way at the other end!  As we approached the Big Pond a pair of Brown-crested Flycatchers sat in soft light, along with the male Green Kingfisher (before a Kiskadee ran him off)!  A subadult male Baltimore Oriole showed, and as we circled the pond three Orchard Orioles took off over our heads.  At the little bog before the boardwalk Jim spotted a Northern Waterthrush and a Common Yellowthroat, and possibly a Yellow Warbler, but I didn’t get a good enough look.  We took the back trail and at the fence at the Even Bigger Pond we spotted a young Black-crowned Night Heron that was being bugged by a grackle!  At one point I was trying to pish in some birds and a young Gray Hawk came tearing in; that was a show!  At another point I realized we had lost Jim, and he had held back to photograph a sunning Giant Swallowtail!  He also found a very cooperative Olive Sparrow! 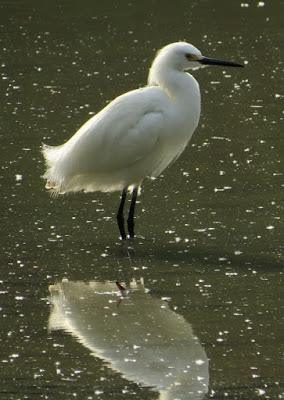 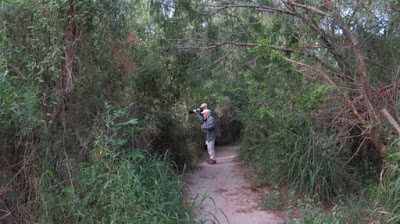 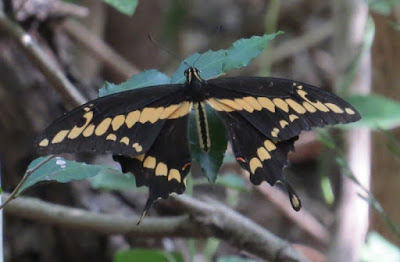 After making the circle we went to the feeders, where Frontera’s guide Ernesto (I found out later) was focusing in on a bird that I never got onto, but there was a lot of activity at that spot; we three snuck in and took our seats, and enjoyed an Eastern Wood Pewee sallying out for bugs, an overhead Chestnut-sided Warbler, and lots of doves fighting it out at the feeders.  At the next set of feeders (the “old station”) we had a female Bay-breasted Warbler come in, along with a family of titmice and a strutting Ovenbird.  Chachalacas were chorusing all over the place, and the Beardless Tyrannulet called consistently all over the park!  At one point I heard a peep! that reminded me of a Yellow-bellied Flycatcher, but the bird never came out… L  On the Dead End Trail a Swainson’s Thrush was softly singing, and a Carolina Wren came out to pishing.  Continuing towards the Visitor’s Center we ran into Ernesto and his charge again, where he had another Chestnut-sided Warbler but also a Red-eyed Vireo!  (He also showed us a photograph of a Ruby-spotted Swallowtail they had seen back at the feeders, but he said it came in, fed long enough for a photo, and then was gone… L)  Later on we had a Warbling Vireo singing kind of a whisper song, and further on a Philadelphia came down to say hello.  On the way out a gentleman pointed out a Chachalaca nest right over the sidewalk! 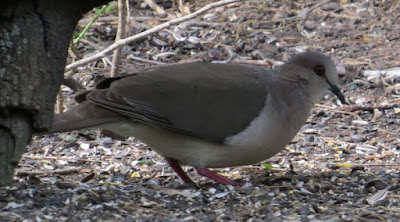 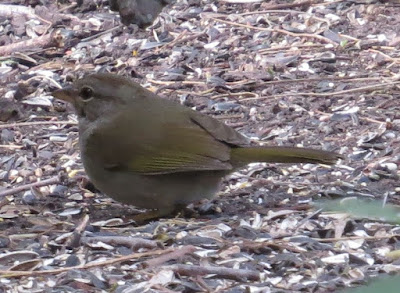 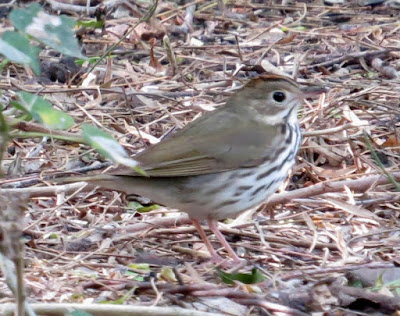 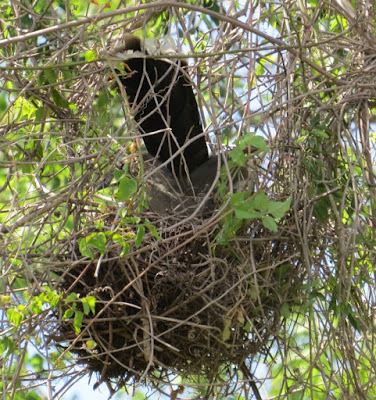 A conversation about Dickcissels inspired me to ask them if they were interested in seeing “grasspipers”, and they certainly were, so we headed off to the Weaver Road Sod Farms next, by way of Cannon Road.  We picked up the requisite Tropical Kingbirds, and as we swung into the sorghum fields we got some great looks at the Dickcissels singing away!  We headed up and over to Weaver Road where we had a few Horned Larks, and where the road curves left at the north end of the sod farms, a large flock of large peeps turned out to be Whiterumps!  While enjoying them a larger Pectoral came in and joined them.  Turning the corner we spied an American Golden Plover, and a little further down we did manage to pull out a few Buff-breasted Sandpipers, but the heat waves were getting pretty bad by then.  At the south end of the fields were several Cattle Egrets, but again, no Hudsonian Godwits. 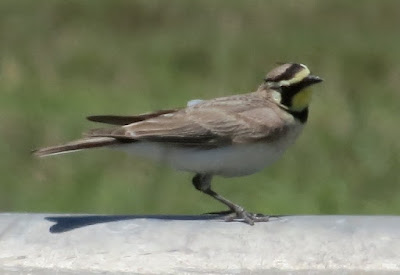 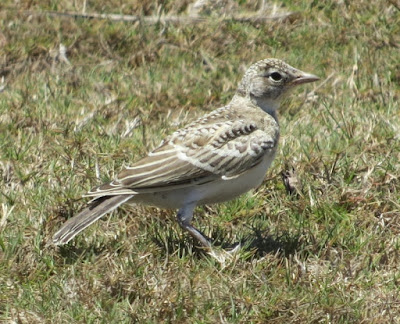 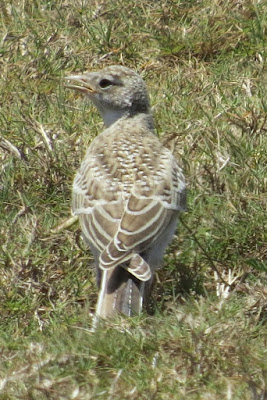 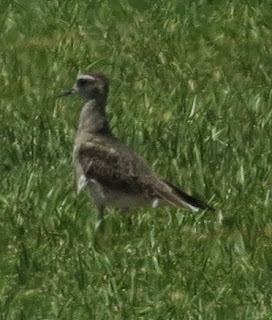 After consulting the handy dandy Texmaps Book to figure out how best to get to Old Port Isabel Road (OPIR), we headed out on Jimenez, stopping for the Cliff and Cave Swallow show on the canal bridge.  We also checked the “Rangerville Resaca” which was full of Wilson’s Phalaropes, and at the south end of that pond we had a nice selection of shorebirds, adding stilts, dowitchers, Stilt Sandpipers, another Whiterump, and a few Semipalmated Sandpipers.


We headed south to US 281 and took that all the way over to FM 1732, taking that to the freeway and then to FM 511 to OPIR.  There wasn’t much activity due to the time of day, plus the hacking platform was empty, so we were hoping that wasn’t a bad omen!  We heard several things, including Verdin and Bewick’s Wren, and a Curve-billed Thrasher sat up at one point.  The Harris’ Hawk pair gave us a look, and near the shooting range we were looking at a Gull-billed Tern when Sue spotted a pair of distant White-tailed Hawks!  But the icing came when she spotted a small raptor on a post, which promptly took off, but thankfully used the wind to settle on a telephone wire nearby: a gorgeous Aplomado Falcon!  What looks! 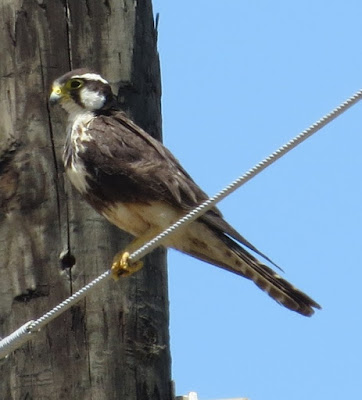 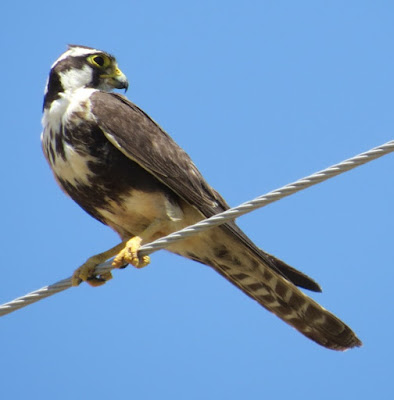 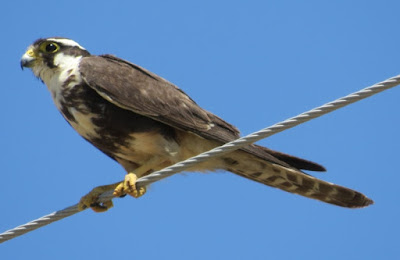 Everything was gravy after that, but they still needed Cassin’s Sparrow, so we crawled along until a cooperative bird sat up on a wire for us.  Lots of Scissor-tailed Flycatchers posed for us, and Sue spotted a little guy in the bush that turned out to be a bunting, but what looked like strong wing bars and a smooth cinnamon breast made me wonder if we had a female Lazuli!  Alas, Jim’s photos actually showed a nice clean white throat and streaky breast, so she was indeed an Indigo.  We spotted a dark raptor that turned out to be a young White-tailed Hawk, but as we were enjoying him Sue spotted another raptor about three poles down, that turned out to be yet another Aplomado!  We couldn’t believe it! 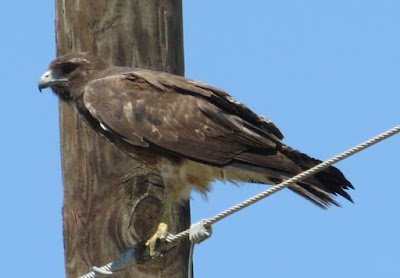 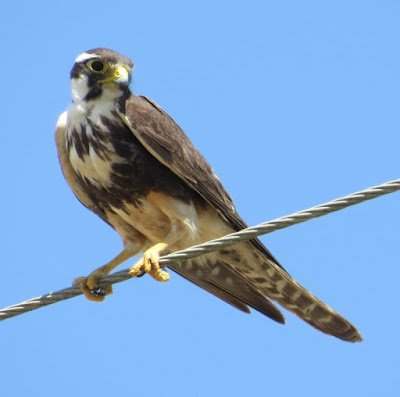 Yet another juvie Aplomado (unless it was the same one that decided to fly a mile or so up the road...) 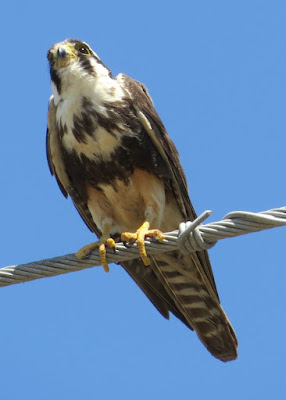 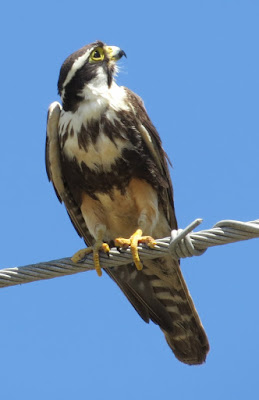 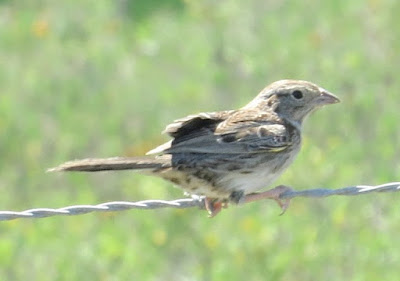 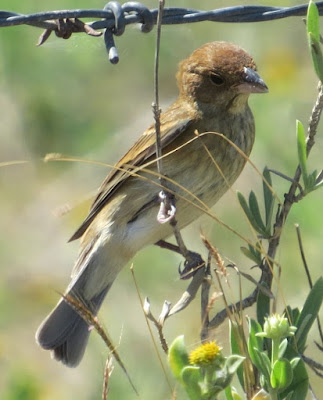 Female Indigo Buntings can sometimes show wingbars (like this bird), but the streaky breast and contrasting white throat set them apart from Lazuli. 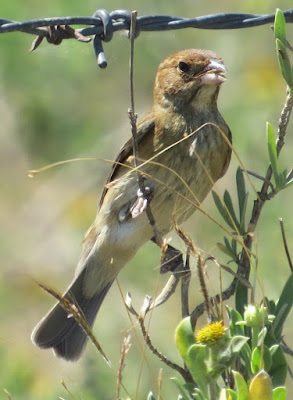 We had to start back about that time anyway, so we continued north to SR 100 and back to the freeway and home, finishing up with a hearty 96 species for the day!  Bird List: