Once again joined by Tim, we headed down to Santa Ana first thing to hike the Pintail Lake Trail while it was still relatively cool, first picking up a Curve-billed Thrasher at the Coffee Time drive-thru! J  I was hoping a White-tailed Kite might show up along Alamo Road, but he was a no-show.


Pulling into the parking lot, the Chachalacas were spreading the morning news already, and one pair was visible in a tall tree!  Unfortunately the only Inca Dove we encountered was a deceased one outside the Visitor Center (and that the ants had already found), but Tim’s attention was soon redirected to all the cool moths on the wall outside the restrooms!  Continuing on, a Carolina Wren was singing “right there” just before the bridge over the canal, and upon closer inspection, we suspected he had a nest in the portable generator parked there (which may have explained why they had cones all around it J)!


After crossing the levee a nice Kiskadee posed for us, and a Gray Hawk called in the distance.  Arriving at the “roundabout”, we headed on the Pintail Lake Trail, where we hadn’t gone too far before the Beardless Tyrannulet started calling!  He was distant at first, but as we continued on the trail he sounded closer, until finally someone (probably Tim – he was Mr. Eagle Eyes for us today J) spotted him doing acrobatics in a tree, and thankfully everyone got a great look!  There was also a Verdin nearby that actually came out in the open!  A distant Great Crested Flycatcher giving his loud Wheeep! was nice to hear, too, and Tim spotted a Common Ground Dove in a tree. 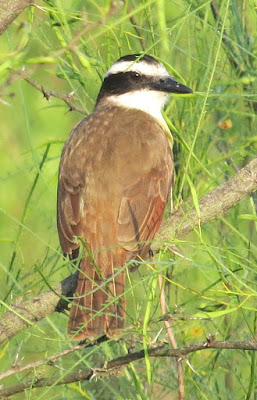 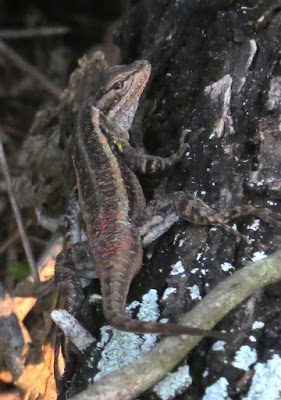 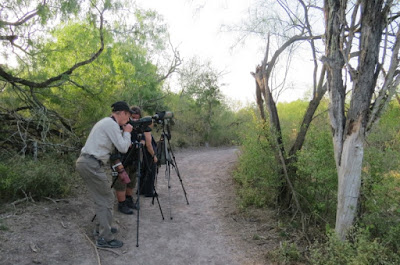 As we turned into the open area, a quick scan of the lakes (seeing as we were looking into the sun) produced ibis, spoonbills, stilts, dowitchers, and ducks, and further down the trail a Long-billed Thrasher sat up in a tree in plain view as he sang!  We had a great liftoff of Broad-winged Hawks of all ages, and at one point a Sharp-shinned joined them!  Finally getting to a point to where we could view the water in decent light, we checked the shallow marshy pond and had another Sora out in the open!  When what I thought was another Sora went running across to the back of the pond, I was shocked to see that it was actually a Snipe!  Thankfully Tim was able to find him hidden deep in the reeds, and eventually he came out allowing everyone great looks – I expected these guys to be long gone by now!  Another Pectoral Sandpiper came in along with a Spotted and tons of Least Sandpipers, and the Long-billed Dowitchers called nicely.  Tim thought he might have glimpsed an Anhinga, but it disappeared before he could get a good look.  Three Neotropic Cormorants gave us good looks at the shape of their gular patch as well. 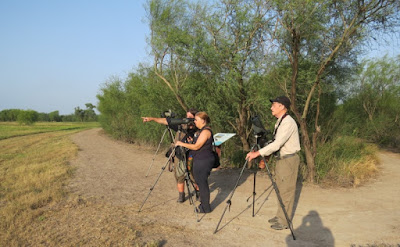 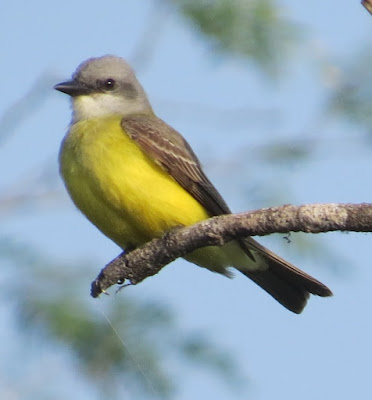 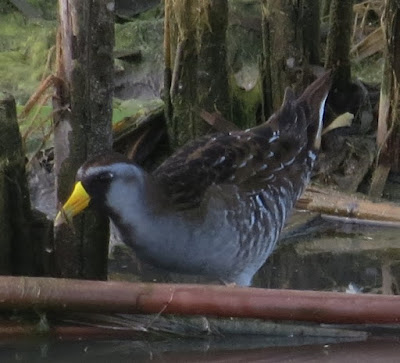 Yet another show-off Sora! 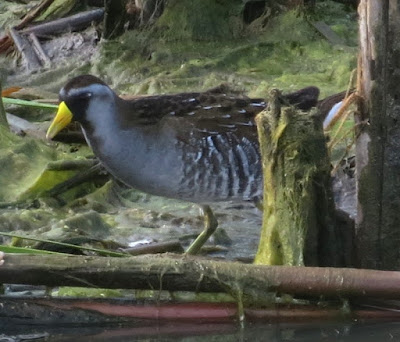 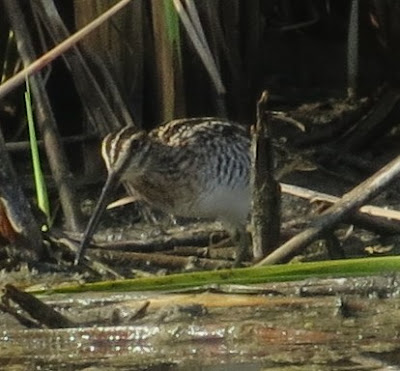 Even more surprising was this late Wilson's Snipe! 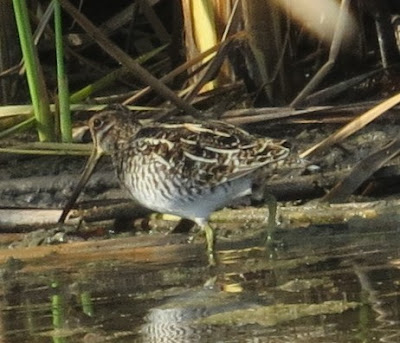 It was getting warm so we trudged back with no kite, but we did see some nice butterflies:  a Giant Swallowtail appropriately impressed everyone, and a mess of White-striped Longtails was bouncing around as well!  A Julia’s Skipper was being bullied by a Clouded, and the “other” Julia (the heliconian) showed well, along with a Zebra Heliconian!  We also saw several lizards, including the abundant Texas Spotted Whiptail and Rosebelly Lizard.  On the Willow Lake Trail I heard a Lesser Goldfinch, and Tim was able to spot it and show everyone (a beautiful black-backed male), and on the Chachalaca Trail a titmouse started calling, and we finally drew it out so that Mike could get a picture! J 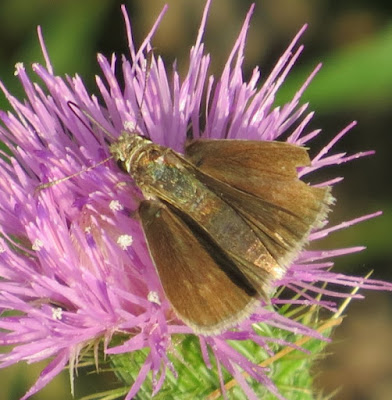 Julia's Skipper (above and below) 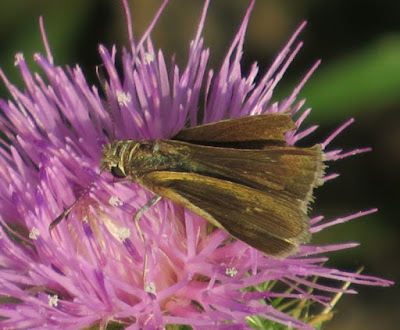 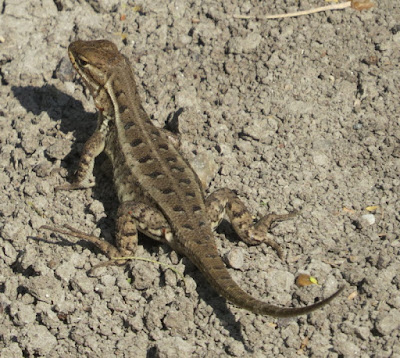 After buying some souvenirs (and some Coke J) we headed to Subway to pick up lunch and then headed out to the north end of Sparrow Road.  Just before we pulled in we had great views of a couple of Swainson’s Hawks, and Horned Larks and Lark Sparrows were abundant on the first leg.  An immature White-tailed Hawk circled in front of us, and later the gang saw an adult!  Passing some rows of corn Tim spotted some Bobwhite hiding in them, but they flushed before anyone else could get a look… L  When we finally reached the sorghum fields, the Dickcissels were out the yin yang, and Mike was finally able to get his picture! J  We went down 14 Mile a little in hopes of finding Turkeys, but found plenty of turkey feathers instead! J  Once again, Tim spotted some Bobwhite by the road, but they took off before anyone else could get a look; since they sounded like they were still close we all piled out and tried to call them out, but they just called back to us from the brush and stayed put.  We did have a nice look at a Cassin’s Sparrow on the wire, however, and a Pyrrhuloxia posed on a dead tree.  I heard a Black-throated Sparrow that didn’t wanna come out, while Painted Buntings were plentiful (but wanting to hide in the trees in this heat)! 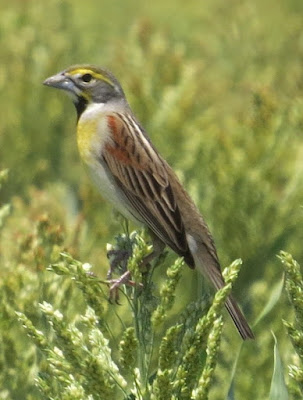 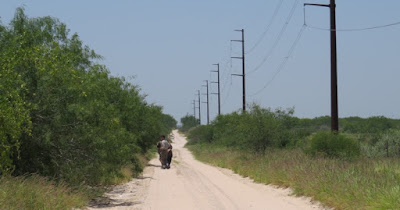 Looking for Bobwhite along 14 Mile

Continuing down Jara Chinas, the best bird was a Roadrunner that I enticed to come out after he ran across the road and hid himself, and he hopped right up on the branch and wagged his tail like crazy!  Further down the road his cousin, the Yellow-billed Cuckoo, flushed out of a tree and headed for parts unknown…  We had unsatisfying views of a female Bullock’s Oriole that was chattering, and at the grasslands we did indeed hear a Grasshopper Sparrow, just he just didn’t wanna come out; we did see a distant Savannah Sparrow sitting up, however!


From there we made the right onto 7 Mile, and it was really getting hot by then – about the only bird of note we saw was a posing Caracara!  Cutting down County Line Road, we did flush a pair of Bobwhite that gave a brief view, but they were long gone by the time we got out and didn’t have any plans of coming out for us! 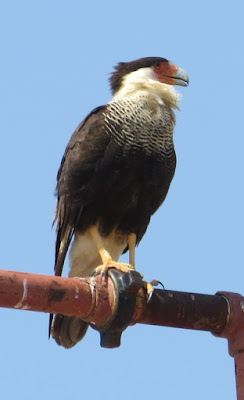 Panting Caracara on an oil/gas well 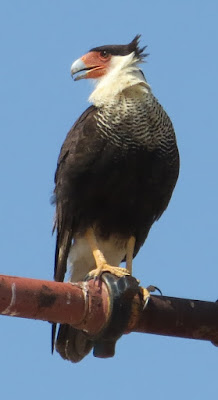 We had to head back about then, so we continued on in to Sullivan City, grabbed some gas and ice cream at the Stripes (it was over 100 out there), and headed home with 89 species for the day.  Bird List: