The next morning I could only spare a half day, so since Mike was still trying to get that perfect titmouse picture (and Tim was interested in leps), I figured the National Butterfly Center was the best bet, as they also have bird feeding stations that they stock all year, and we did have the titmice coming in on previous visits.  Since they didn’t open till eight, we cruised the Levee Road that connects with Old Military Highway in search of whatever might pop up; it was a beautiful day (although a Red Flag Warning was due to go into effect later in the morning), and we enjoyed several kingbirds, Long-billed Thrashers, and even a sunning Roadrunner!  The highlight along this stretch, however, was a subadult Bullock’s Oriole that showed nicely, and a stop at the canal bridge gave good looks at Cave and Cliff Swallows (mostly the former). 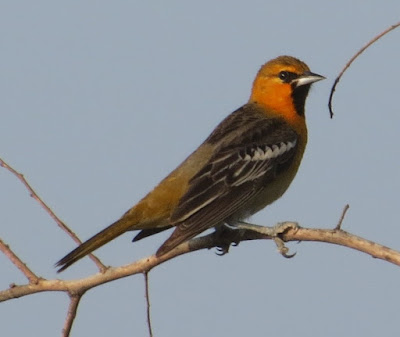 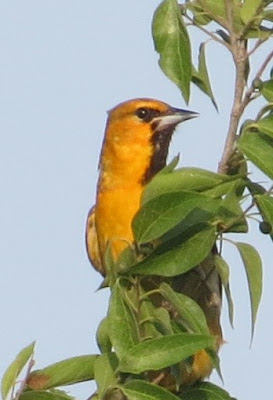 From there we swung into the center and checked in, where we were warned that about 60 four and five-year-old kids were coming in later!!  They offered to go ahead and put out the bird food for us now, so we headed straight to the old garden, stopping to enjoy a young Gray Hawk that had zoomed in, and a bunch of Turkey and Black Vultures feeding on what looked like a wild boar carcass!  Tim needed help IDing the butters, so I plopped Mike and Sally at the feeders (a nice Clay-colored Thrush popped up almost immediately) and took Tim around the sunny spots looking for leps; the first thing we ran into was a worn Horace’s Duskywing (which is somewhat rare in the Valley), but the other bugs were pretty straightforward:  lots of pretty Crimson and Bordered Patches were about, and we had Ceraunus, Reakirt’s, and Cassius Blues.  Phaon, Texan, and Vesta Crescents showed up, and what I thought was a Rounded Metalmark at first turned out to be a Fatal after looking at the photos on the computer (there’s a very subtle difference in the shape of the “metal” median band).  Tawny Emperors were all over (especially on the bait logs), but thankfully we got multiple views of his most-wanted butter, the iconic Mexican Bluewing!  We also had several Zebra Heliconians and Giant Swallowtails floating around, along with some cool spiders (one I had to look up, called a Spiny-backed Orb Weaver)!  At one point Mike came running to find us:  a Bobwhite had come in to the feeders, and he got crippling photos of it!  I even did a little victory dance in his honor! J 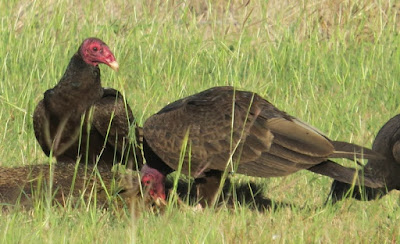 Turkey Vultures gather at a carcass 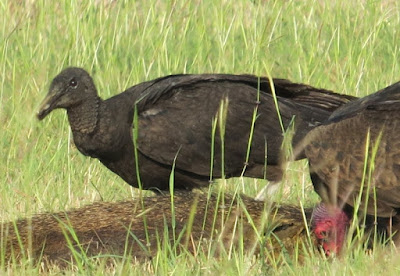 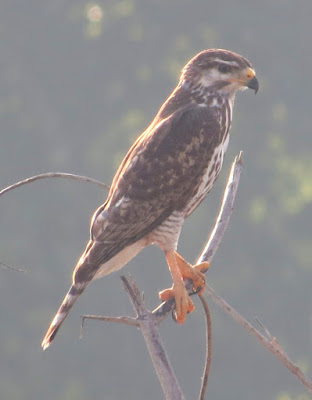 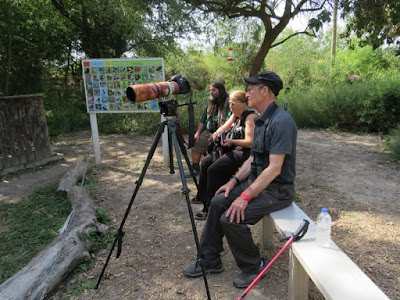 The gang settles in at the feeders for a photo shoot! 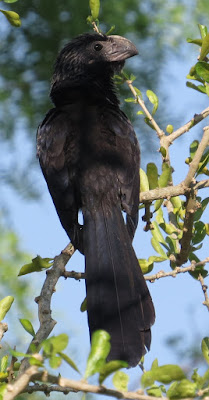 Groove-billed Ani was a nice surprise! 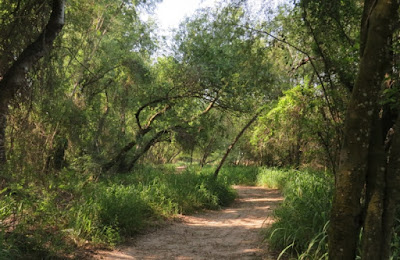 One of the many trails 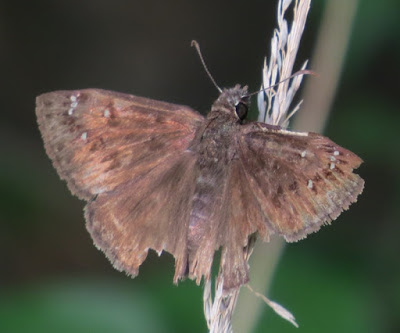 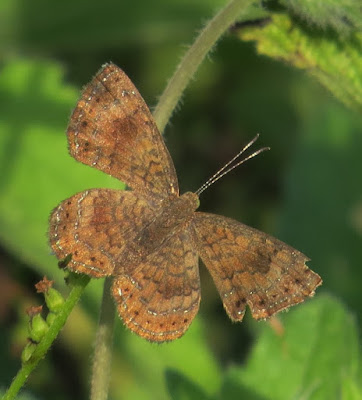 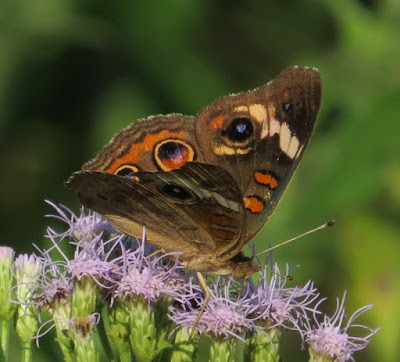 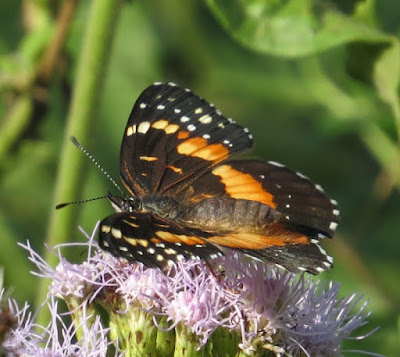 Bordered Patch (dorsal above, ventral below) 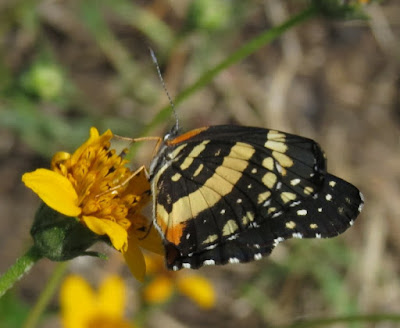 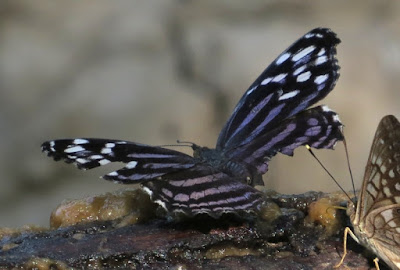 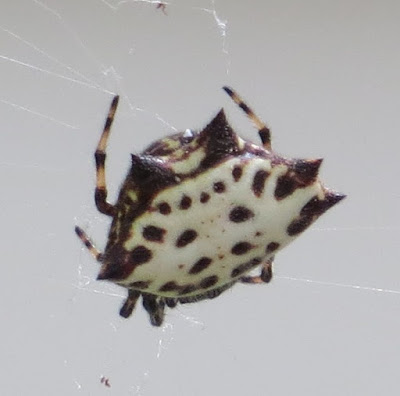 After a while the three of us decided to hike the Walking Trail in search of other birds; I didn’t have much hope that we’d find anything new for their trip, but we did enjoy several Harlequin Beetles on the bait logs, and Tim found a huge Click Beetle on the way back to the feeder area.  The first group of kidlets had arrived, but they were very well-behaved, and while they claimed the shady picnic table we claimed the shady benches at the other end, and enjoyed more birds coming in, including two Chachalacas that were literally running circles around all of us!  (The staffer who was lecturing the kids quipped that someone was playing hard to get… J)  We were also distracted by the Altamira Oriole pair coming into the tree behind us, where they also had a big nest!  A pair of Long-billed Thrashers were drinking water from the “ball fountain” as well! 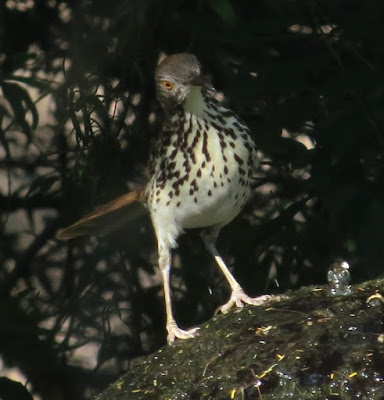 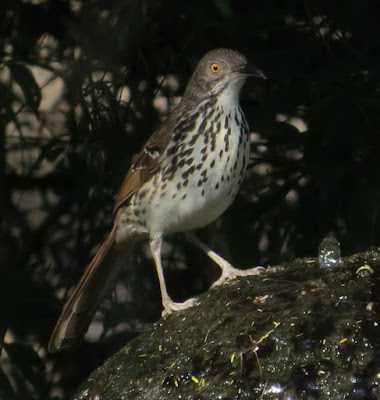 Tim had wandered off, so leaving Mike and Sally in hopes of a titmouse, I found Tim and pointed out more butters, but in the process of wandering we heard this commotion, and over by the pavilion a cottontail was squealing and attacking a huge Indigo Snake!  Had I been on the ball I should have gotten a video of the incident, but I was too focused on trying to identify what the snake had, and it was indeed a baby rabbit, but so young that it didn’t even have fur yet!  Tim went to fetch Mike and Sally for that one, and by the time they got there, the snake was still there, but he had devoured his meal and quickly slithered down his hole!

It's hard to shoot an Indigo Snake when it's making off with its prey! 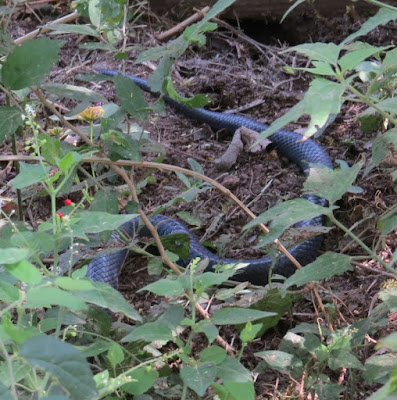 By that time it was time to head back to Alamo, so after a stop at the VC for souvenirs (and then a stop at the Stripes for coffee J) we continued on home.  The bird list was rather meager (and the titmouse proved to be a “heard-only”… L), but the show by additional critters made for a great morning!  Bird List: