We started out pre-dawn this morning, picking up one of the summer-resident Lesser Nighthawks batting around the apartments while I waited for my charges.  We were the first ones at Estero Llano Grande State Park (we had an amusing discussion on the way regarding the “proper” pronunciation of “llano” J) and we headed straight into the Tropical Zone.  The normal players were tuning up (especially the Chachalacas), but we were focused on getting the target White-tipped Dove.  On the way I thought I’d try one more time to see if the McCall’s Screech Owl was sitting on his stump, and this time he certainly was!  Everyone had great scope looks at this little guy! 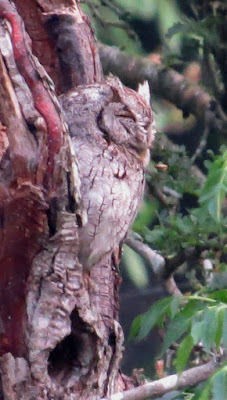 We then snuck over to the feeder area, where after a couple of minutes a big fat White-tipped Dove pranced out into the open!  Everyone appreciated his lavender neck, then we went to sit at the drip for about 15 minutes.  That actually turned up empty, so we headed back behind Ben Basham’s place, where a slow chattering led us to the property line with the camp and also revealed a young male Bullock’s Oriole!  After he flew, someone thought they had a female oriole out in the open, but it turned out to be a female Summer Tanager!


From there we headed to the Visitor’s Center, getting a brief glimpse of the Beardless Tyrannulet as it fled a tree after calling very nicely, then padded the list at the deck, picking up more White-tipped Doves at the feeders, plus several Stilt Sandpipers and Long-billed Dowitchers, along with a male Wilson’s Phalarope.  We noticed some volunteers setting up some things and asked if some kidlets were on their way (yes – 90 eight and nine-year-olds!!!), so we chose that moment to head straight to Alligator Lake and the Pauraque!  A brief stop at Dowitcher Pond added some beautiful Avocets, plus a flyby Ringed Kingfisher that was not calling for once! 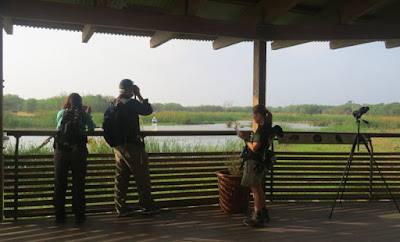 Enjoying birds from the deck 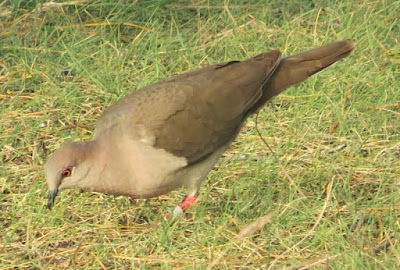 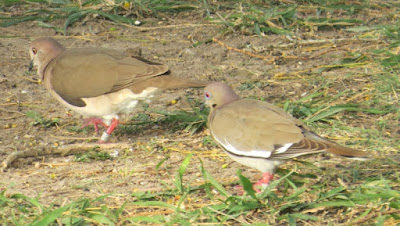 With White-winged Dove on right

On the way three other guys followed at a distance (they admitted they were hoping we’d find the bird for them J), stopping to add a young Yellow-crowned Night Heron to the list at Grebe Marsh, and a pair of Green Herons at Alligator Lake.  Approaching the Pauraque spot, I could see right away that he wasn’t where he was “supposed” to be, so I recruited the three guys to start looking as well!  Before long the “Pauraque Whisperer” himself, Huck Hutchins, arrived with a couple who had yet to see it for the year, so after checking the back side of the “island” without success, we went to a spot at the foot of the ramp to the overlook, and there he was, being harassed by the Crazy Ants!  (We even saw him get up and run, trying to shake them off, before returning to his spot!)  Everyone took their time enjoying this cryptic bird before we retreated to the overlook, where a Belted Kingfisher came sailing in with what looked like a crab.  I had just gotten the scope on her before she took off, but what should come in from the opposite direction but the Ringed Kingfisher!  She sailed out of sight, so after checking off the Osprey on the power pole (Huck teased me for still calling then “telephone poles” when there really isn’t any such thing anymore), we headed back to the next gap in the vegetation, and there was the Ringed perched in a tree, giving great (albeit in the sun) looks!  Huck found a Tricolored Heron hidden in the vegetation which we all enjoyed as well.  On the way out an adult Yellow-crowned Night Heron had joined the youngster at Grebe Marsh, and he was certainly a hit! 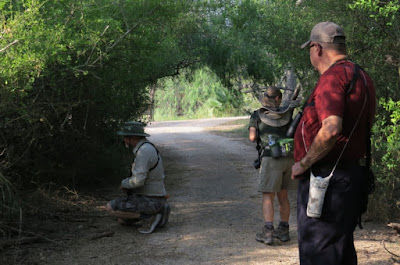 Huck looks for the elusive Pauraque...

...and finds him in a totally different spot! 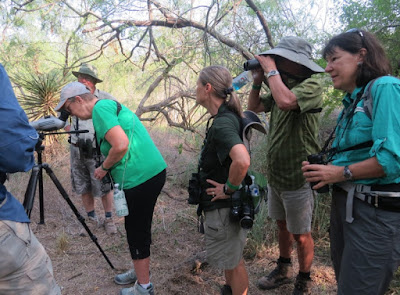 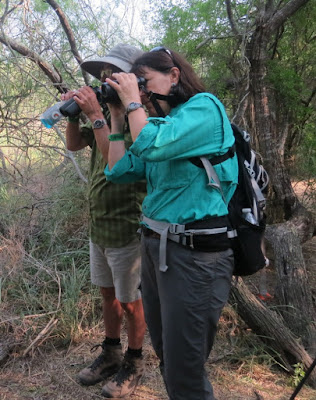 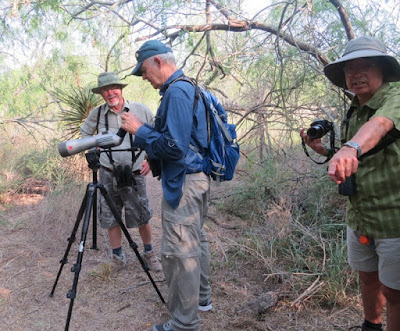 Huck supervises Bill's digiscoping session while Evan evidently spots something right behind me! 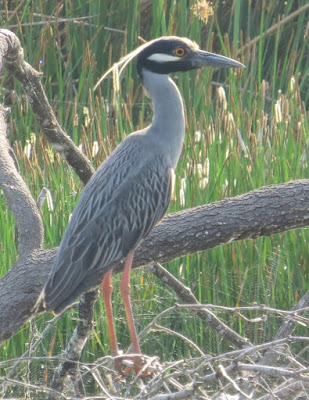 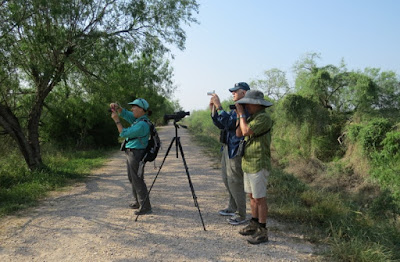 A text had come over the LRGV RBA about Hudsonian Godwits and a Sprague’s Pipit at Weaver Road Sod Farms, so the gang was game for that!  Heading east, we made a quick stop at the “Rangerville Resaca” and had several pretty Wilson’s Phalaropes amongst the stilts and other sandpipers.  Dickcissels sang in the fields on the way to Weaver Road, and once on the road itself, one of Linda A’s “most wanted” birds landed on the road in front of us – a stunning Horned Lark!  As we got to where the birds were hanging out, we found American Golden Plovers and Long-billed Dowitchers easily enough, plus a few Pectoral Sandpipers further out, but Linda was still gushing over all the Horned Larks! J  Another birder (who turned out to be my friend Tammie) was out looking, but couldn’t find any godwits, and before long a third car pulled up with fellow Birder Patroller Norma and her long-suffering hubby David!  As it turned out, Linda M. had contacted Norma for a bird walk around Hugh Ramsey over the weekend, as she had met her at the Tucson Birding Festival, where Linda and Bill are from, and where Norma et al had promoted our own LRGV Birding Festival!  Small world! J 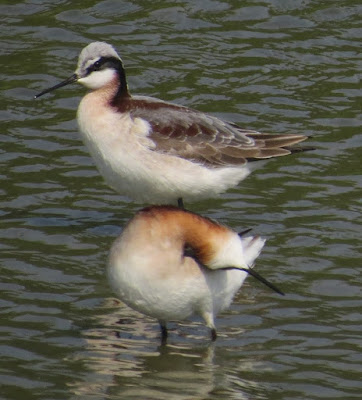 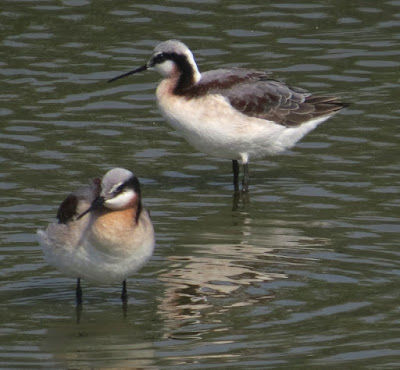 Looking for "grasspipers' at the Weaver Road Sod Farms


Due to all the socializing I was having a hard time getting everyone on their life Buff-breasted Sandpipers J, but they all eventually had good looks, but still no sign of the godwits and/or pipit.  Despite the wind and heat the gang was up for one more stop before heading home after the morning shift, so we shot north to Tiocano Lake, where we took our lives in our hands and hiked down the road, getting stupendous views of several Roseate Spoonbills and a couple of pairs of Gull-billed Terns!  A Pied-billed Grebe sang, but the King Rails were absolutely silent. 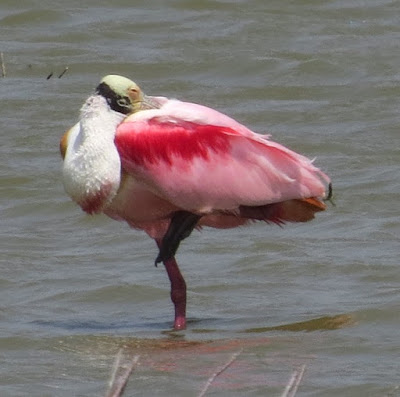 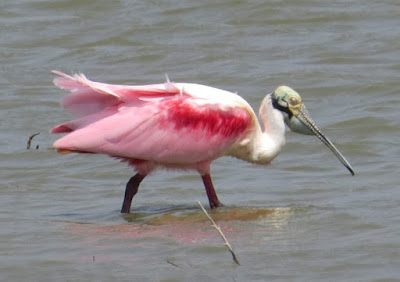 We headed back to the Inn after that for siesta, planning on meeting at 4:30 for some road-birding to take us to sunset.  Siesta was interrupted, however, when my friend Pat called announcing that she had a Chuck-will’s-widow in her yard!  I called Linda M., and before long we three girls were taking a short hike down to Pat’s (the guys took a rain check), where she guided us to the back porch, and we got a wonderful view of a bird I normally only see when I flush it!  Linda A. also used the opportunity to show us a picture of a bird she photographed at Weaver Road that turned out to be a Grasshopper Sparrow! 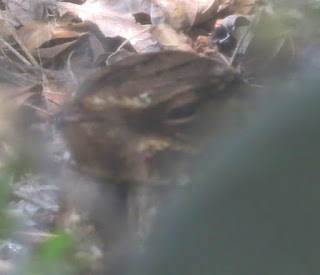 Terrible shot of Pat's Chuck-will's-widow through her screen...

After a nice chat with Pat (and spotting a female Painted Bunting coming in to her drip) we headed back, then once again hit the road at 5:00 for some road-birding.  The gang wanted to come back early, so we headed for Wallace Road, where not too far into the ag fields we had several Dickcissels singing, and got good looks at one sitting up!  (Several were singing closer, but with the wind they were remaining hidden…)  A White-tailed Kite drifted over at one point, and in the nice thornscrub habitat a Painted Bunting sang and eventually came out and gave great views!  Nearby some Indigo Buntings sat on the fence, but they were more shy; more cooperative was a pair of Scissor-tailed Flycatchers that posed for multiple pictures!  Invisible but calling in the distance were Bobwhites and a single Groove-billed Ani. 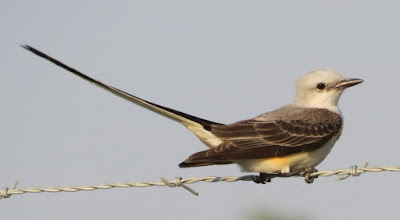 We soon reached the wetlands, which thankfully truly were wet (sometimes the area can be bone dry)!  Both grebes were calling, but about all we saw were gallinules and coots.  At one point I heard a Fulvous Whistling Duck, but only Blackbellies showed themselves (there was a lot of vegetation blocking the views).  In the big wetland were groups of Cattle Egrets and Neotropic Cormorants roosting while some White Ibis sailed in, and an Anhinga posed on the way out (albeit right in the sun)!  Someone spotted a nice Harris’ Hawk sitting on the opposite side as well.

It was getting on close to sunset by that time, so we decided to call it a day; between both shifts we racked up 92 species!  Bird List: