Had a delightful day with two couples that were longtime friends, from Louisiana and Rockport, Texas, respectively.  All were easy-going and just wanted to enjoy the birds we had, and despite the report that migration had been slow, they were still willing to try the Island, so off we went (after starting the list with the local Lesser Nighthawk batting around), taking two cars (we girls went in my car and the guys went in Ed’s).  On the way we stopped at the new Aplomado Falcon viewing area along SR100, but the only raptors to be had were a distant White-tailed Hawk and a not-so-distant Osprey. 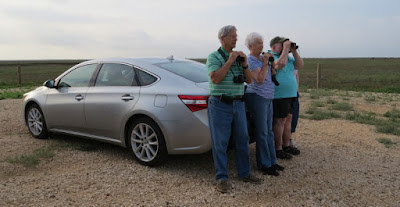 After a snack-and-potty stop at the Laguna Vista Stripes (they reported that the breakfast tacos were very good J) we headed straight to the Convention Centre, where our faithful Salineño hosts – Merle, Lois, and Shamy the Dog – were there to greet visitors!  As expected, things were slow as the southeast winds were just blowing the migrants on over, but a Blackpoll Warbler had been reported, so we were hopeful!  A 15 minute watch at the water feature only produced a Catbird (which I missed), a Baltimore Oriole, a Yellowthroat high up in the mesquite (!),  and a Tennessee Warbler.  We made our way back to the Flats Overlook, but on the way Merle and another gentleman had found a Veery! 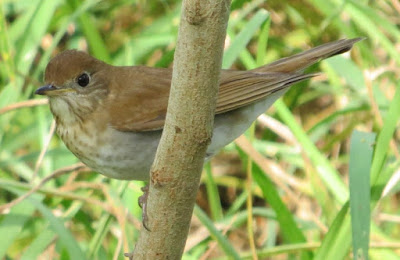 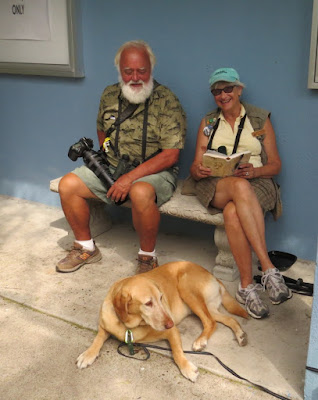 We had a little more to look at on the Flats, however, with a lineup of Laughing Gulls on the posts with a Reddish Egret leading the group, a few Black-bellied Plovers in breeding dress, and a Tricolored Heron just peeking his head over the mangroves.  A female Redhead was on a sand spit along with a single Black Skimmer, and we did hear the Sedge Wren, but he of course didn’t wanna be seen… 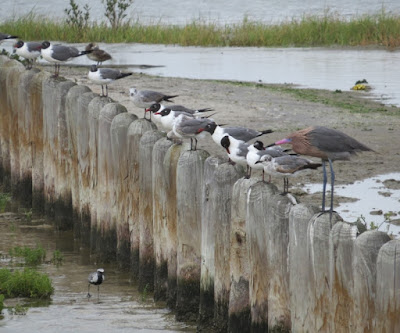 Lineup of Laughing Gulls, with a Black-bellied Plover below, a Reddish Egret on the end, and a female Redhead in the background 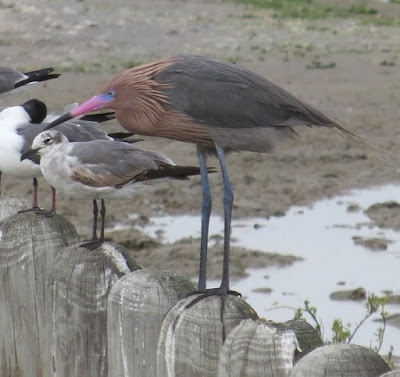 Close-up of the Reddish Egret - note the neon-pink bill as he's in full breeding colors! 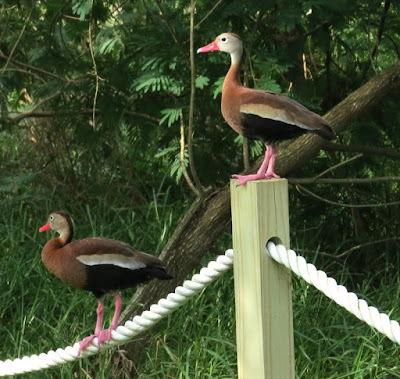 Black-bellied Whistling Ducks guarding the trees...
Both Eddie and Sue Beth decided to stay at the water feature while we tackled the boardwalk, and Merle came along as well; the usual crowd of waders and shorebirds was in the east pond, with an added bonus of a couple of Stilt Sandpipers and one Pectoral!  Both flavors of yellowlegs were close for comparison.  One of the Marsh Wrens only gave a quick glimpse, and out at the “marsh blind” Momma Gallinule had her three baby chicks with her!  But we also caught sight of a brief dogfight between a grackle and the Green Heron, and noticed that one of them flew in with nesting material, and proceeded to slink into the reeds on the other side of the pond!  So we were wondering if perhaps the grackles had predated the original nest (and there was a grackle nest nearby, as we saw her tail sticking up…).  When the second Green Heron shot over to where his mate was, that scared up one of the Least Bitterns!  The other boardwalk yielded a few Least Sandpipers and a stunning Little Blue Heron out in the mud, the same pod of Pied-billed Grebes out at the end, and a bunch of Mullet feeding on something on the surface!  (Both Eds were big fishermen as well, so he helped with that ID… J)  For the third time in a row, the Oystercatcher decided to choose that time to squeal like a kid and fly past the pier! J 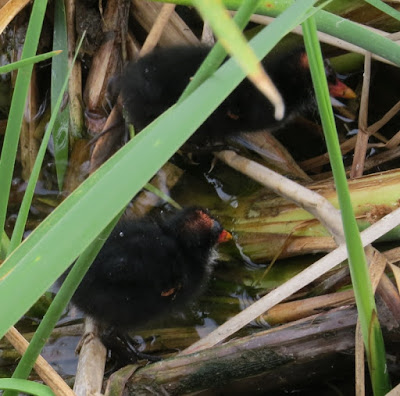 Ed and Janette were interested in actually driving out onto the Flats to get some pictures, but Eddie and Sue Beth decided to stay behind, so since Ed’s car was too low-slung for the job we piled in “Heppy” and headed out, although the Flats were pretty dry for the most part.  Despite the fact that there were already several cars out there, there were a few larid flocks, so we had nice views of both Sandwich and Royal Terns, Black Skimmers, and of course lots of Laughing Gulls and a single Ring-billed (no Franklin’s, though).  Shorebirds were scarce, with just a few Sanderlings and a couple of Willets and Ruddy Turnstones.  We all bemoaned the fact that revelers had carelessly tossed glass beer bottles into the water – getting stuck in the mud out there doesn’t worry me because the ground there is pretty solid, but running over something that could ruin my tires does! L 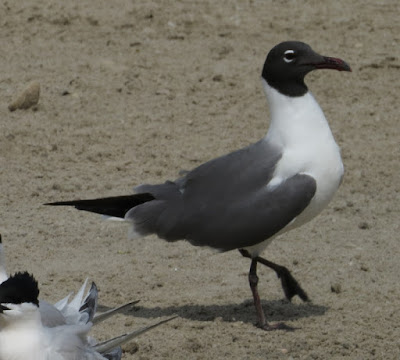 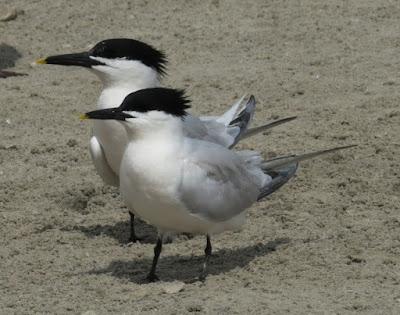 After picking up Eddie and Sue Beth we decided to give Sheepshead a try; it was pretty dead (except for some Collared and White-winged Doves, along with a fat lizard), so we decided to head to lunch.  There was a 35 minute wait at Pier 19 (we at least picked up a beautiful pair of Red-breasted Mergansers there), so we headed to Port Isabel where we pulled into this restaurant (Marcello’s) whose parking lot wasn’t overflowing, and not only were we seated right away, but the food was out of this world and the prices were very reasonable! 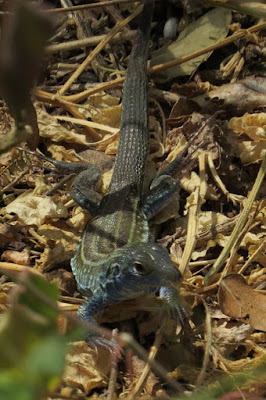 After lunch we decided to head up towards Laguna Atascosa and do some road-birding, but first we stopped at Port Isabel Reservoir where pretty much the same players were there that were there last Thursday:  the three little plovers (although I only got a brief look at the Snowy before he disappeared), and lots of peeps.  Something kept spooking them, however, and they’d wheel around several times before landing again.  A few Wilson’s Phalaropes finally came in towards the end, and a Gull-billed Tern made a close pass.


From there we headed up Buena Vista Road where the highlight was a Caracara and several Turkey Vultures feeding on a Nilgai carcass in a field!  We also added a few Black Vultures to the list and a flyover Whimbrel, but at the Visitor Center Eddie and Sue Beth enjoyed the Green Jays and Chachalacas coming in to the water feature while Ed and Janette and I looked for the MacGillivray’s Warbler that had been hanging around.  As fate would have it, yesterday was the last day it had been seen, but we got nice views of cooperative Long-billed Thrashers and a lovely Altamira Oriole up on a dead tree, and Ed got a look at a Brown-crested Flycatcher that a young couple pointed out to him.  We all got to see the brilliant male Summer Tanager that flew in! J 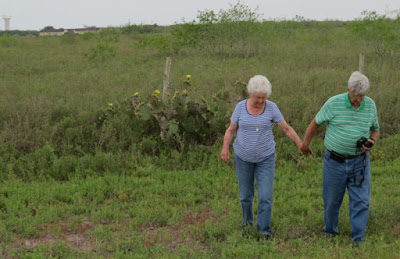 Janette and Ed negotiate the shoulder along Buena Vista Road! 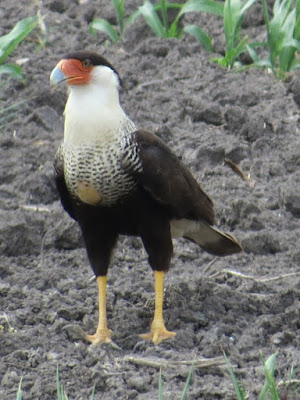 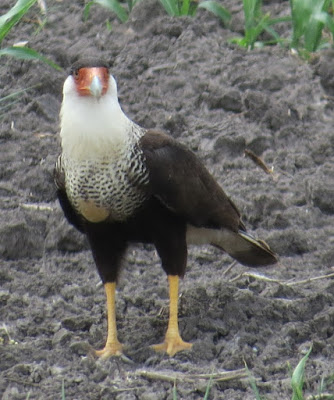 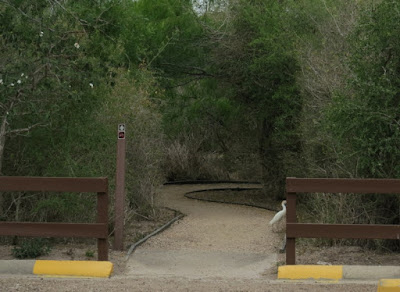 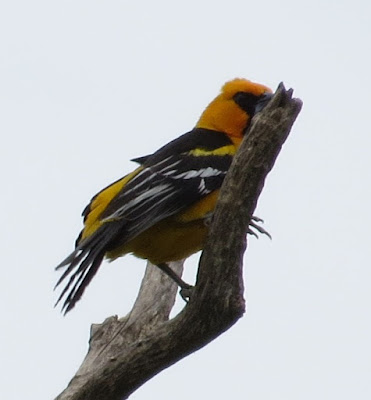 It was time to head back after that, picking up a nice flyover Harris’ Hawk on the way to San Benito.  With good conversation, the time flew coming back (and that’ll happen with three girls in the car! J)  Bird List: