For our second day with Tom and Pam, by making another early morning stop at Coffee Time down the block, we managed to add a big flock of Green Parakeets to our day list – not a bad start! J  From there we headed straight to Old Port Isabel Road (with a stop at the Stripes first) and were greeted by a pair of White-tailed Hawks while checking out Loma Alta Lake (and with the overcast skies, we were actually able to pick out a White Pelican and a couple of Gadwall in amongst all the Coots)!  It took us a good three hours to carefully check the road; there were no falcons at the traditional nesting platform past the canal, but another pair of Whitetails had commandeered the other platform down the road!  One little spot had a Golden-fronted Woodpecker and a Lark Sparrow feeding on the ground, with plenty of Ruby-crowned Kinglets in the trees to taunt us.  At the bend in the road a pair of Harris’ Hawks claimed some poles in the shooting range, and a beautiful Osprey was sitting on a post when a Long-billed Curlew wheeled in behind him! Further down at the chicken coops, Tom spotted an oriole that turned out to be a female Hooded!  But the bird of day (so far as rarity went) popped up along with a Butterbutt – a tail-wagging Palm Warbler!  My charges weren’t impressed as there are gobs of them in New Jersey… J 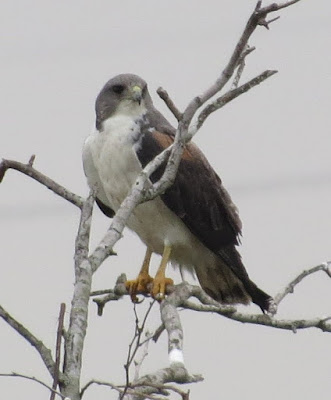 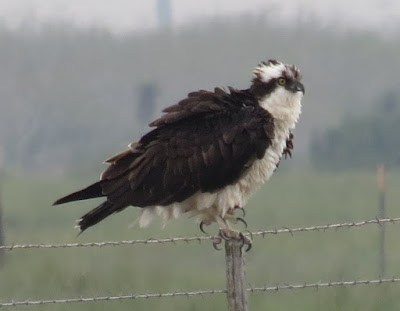 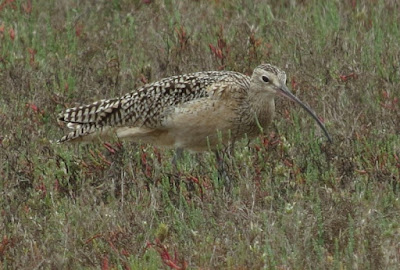 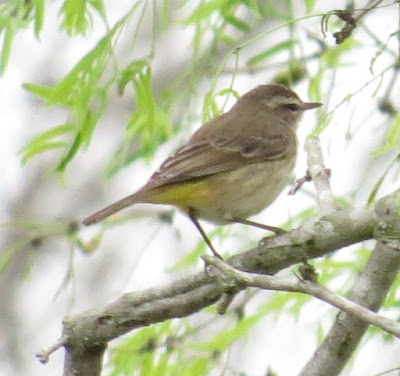 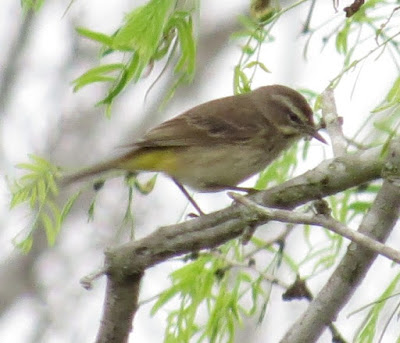 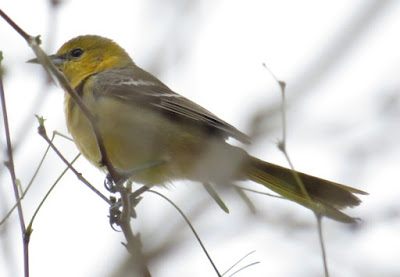 
Continuing on in the coastal prairie habitat, we heard Cactus and Bewick’s Wrens, but could only spot a Curve-billed Thrasher along with tons of Mockingbirds.  The little wetlands had water, so we were able to add Least Grebe, Shoveler, Cinnamon Teal, American Wigeon, and Ruddy Duck to the list as well as more Coots.  The Cassin’s Sparrows were singing in quadraphonic (along with the Meadowlarks) and we were able to see one skylark very nicely!  But once past the pipeline construction area, I must say that the road was the absolute worst I’ve ever seen it; thankfully it was dry, so it was passable, but Pam was starting to call the ruts “ditches” (the word “canyon” was coming to my mind)!  Near one of these spots we had a nice pair of Long-billed Curlews, and I heard Sedge Wrens at the usual spot, so we got out to try and call them in (to no avail, of course), but we also had a very noisy young White-tailed Hawk (with Mom and Dad down the way)!  We spotted a Caracara fly into a yucca down the road, so as we crept up on him, I suddenly noticed the group of Sandhill Cranes next to him that blended in very well!  Just before we started on I heard a distant Sprague’s Pipit doing its pike! call in the distance, way too far away to try and spot.  We also heard distant Bobwhite a couple of times while stopped.  The big canal had a perched Belted Kingfisher and a pair of Mottled Ducks, but that was about it. 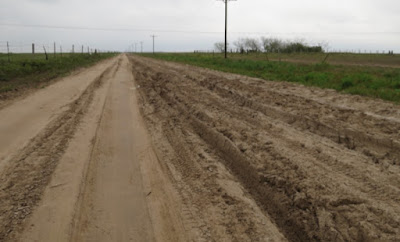 And this wasn't even the worst of it! 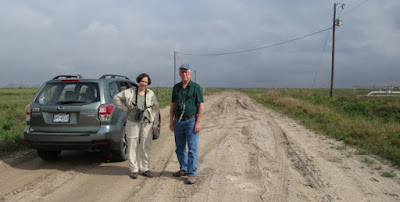 Pam and Tom on a less dicey portion... 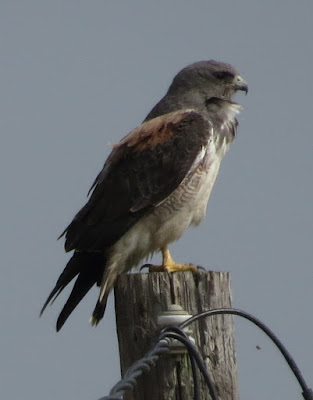 Yet another White-tailed Hawk 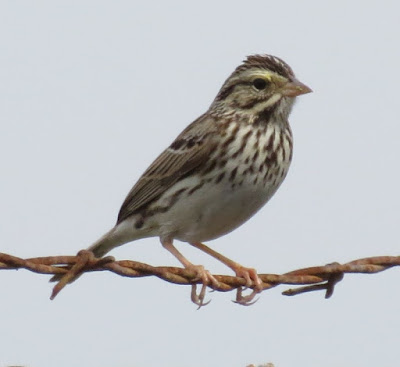 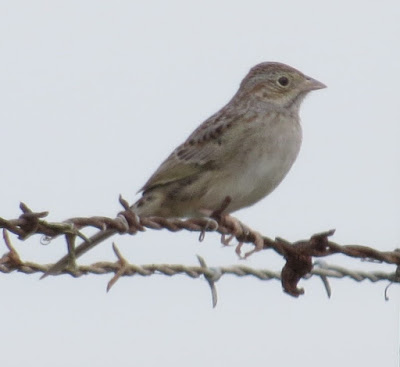 It was getting around lunch time, so we made a quick stop at the Aplomado Viewing Area, where we hit pay dirt and caught the pair at the platform (although it was a heat wave-induced view, and you really had to use your imagination to see the white superciliums)!  A local lady named Julie wheeled in and showed us another platform across the highway that the birds often used (just not today)!  As icing on the cake a pair of Chihuahuan Ravens wheeled in and landed on the wire, showing the “white neck” very nicely when the wind blew!


Heading onto the Island, we went straight to Pier 19 and had a wonderful lunch (Pam and I had the Pastalaya – kind of a jambalaya Alfredo dish – that was out of this world), then headed straight to the Birding Center, enjoying some at-your-feet Black-bellied Whistling Ducks (and their domestic Muscovy), a pretty Green Heron, and a Soft-shelled Turtle on the way in!  Out back we had a nice selection of the regulars, including the “rare bird” that a previous couple I had guided, Craig and Sandy, had reported on their own trip to the Birding Center: a domestic Khaki Campbell duck!  A guy with a Big Gun was shooting something just over the railing, and when I went to investigate, I was a little nonplussed that he was just shooting a pigeon, but upon closer inspection I saw that he really was quite photogenic as he took a bath in the sun and fluffed out his colorful feathers!  A couple of Common Gallinules were being very territorial, and the Coots were looking hopeful for a handout (along with the Mottled Ducks), while a Tricolored Heron danced like a Reddish Egret and a couple of Little Blue Herons made the rounds.  The bay was pretty empty of birds except for a pod of Pied-billed Grebes and a handsome Great Blue Heron in the mangroves.  A skulky thing making a call I didn’t recognize wouldn’t come out, so that was the one that got away…  Along the back side we had a Sora right below us going in and out of the boardwalk’s shadow, plus several White Ibis preening.  In the “east pond” on the way out we had the mother lode, with lots of pretty Roseate Spoonbills, gobs of Blue-winged Teal (with a few Green-winged thrown in), both flavors of yellowlegs, and a token Stilt Sandpiper!  (I thought I had a fat ol’ Alligator but it morphed into a log…)  A Redhead sitting on the bank near the boardwalk didn’t look too good, sadly… 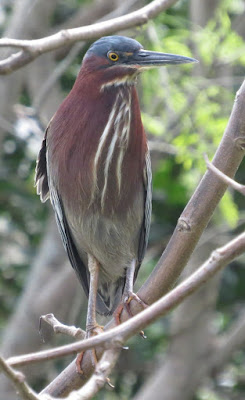 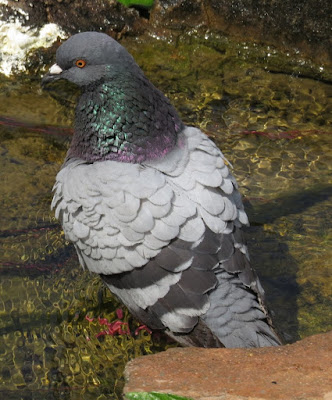 Rock Pigeon getting spiffed up 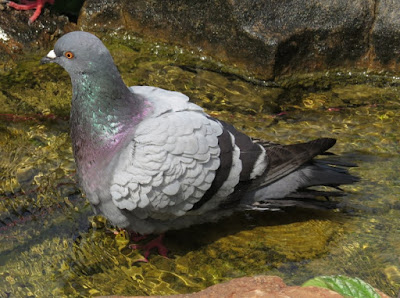 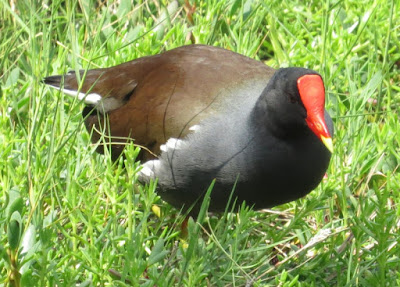 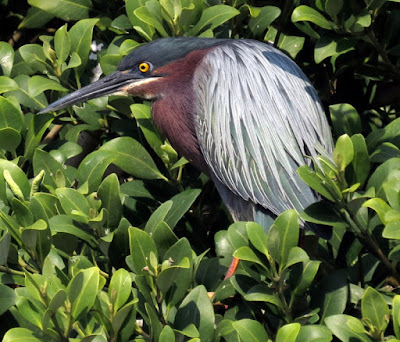 Another Green Heron in the mangroves

Pam and Tom on the boardwalk 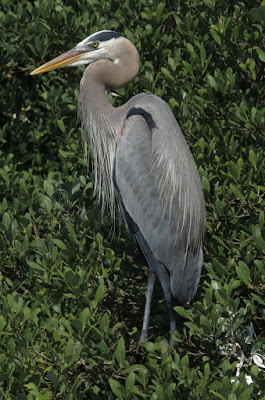 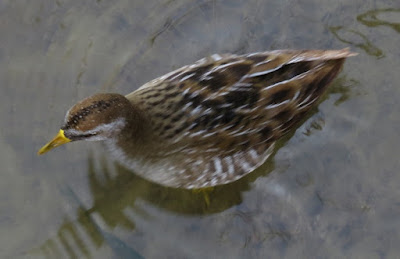 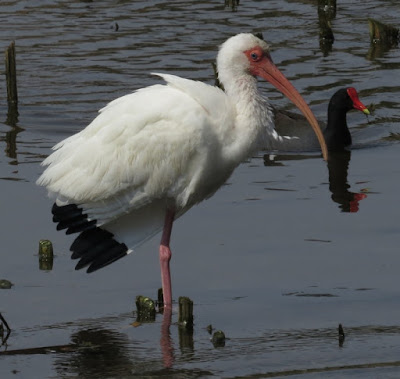 White Ibis (with a Common Gallinule in the background) 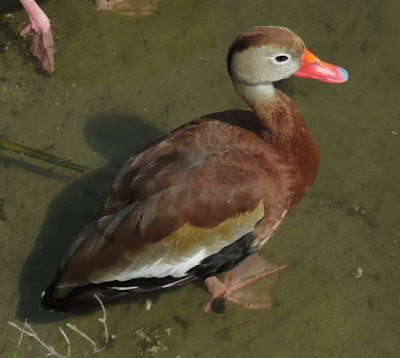 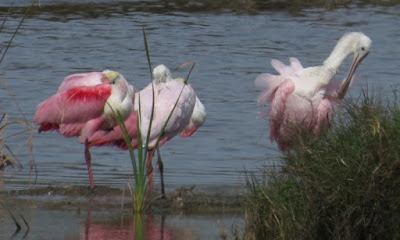 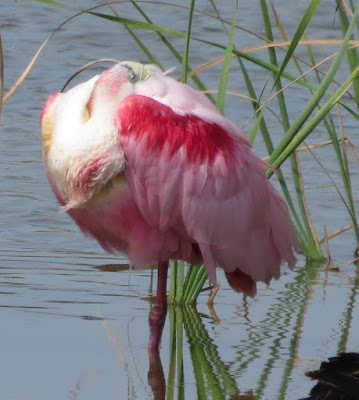 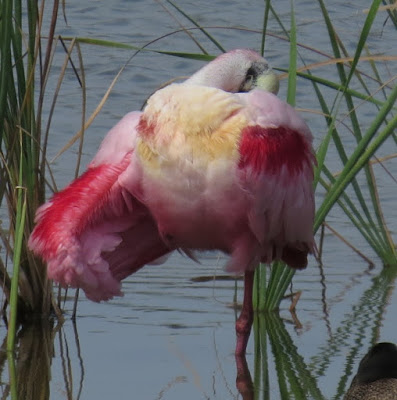 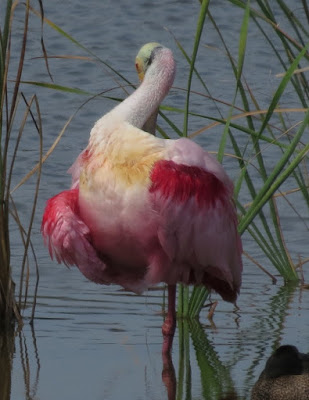 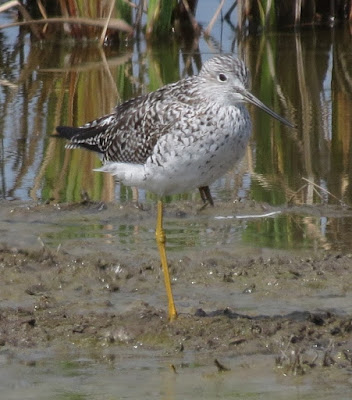 With a Lesser Yellowlegs to the left of the teal 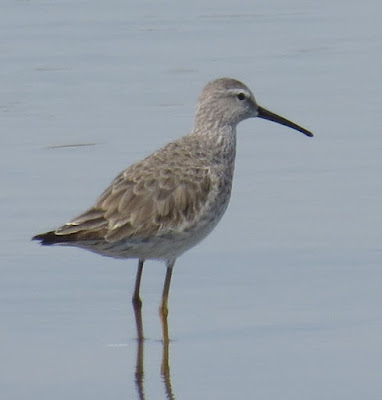 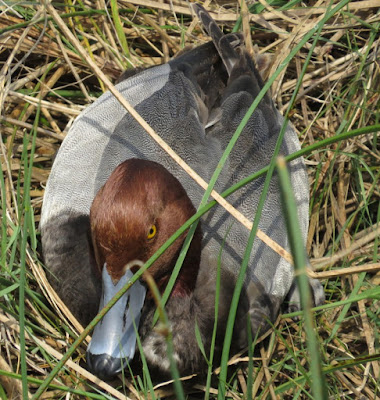 After a last visit to the center for restrooms and an ice cream J it was time to head back, but since they’d be spending more time out here on their own they wanted to see the famous Flats, so we went out far enough to add Black Skimmers, Royal Terns, and a couple of Ring-billed Gulls to the day list, then headed home, adding a last minute Peregrine Falcon wheeling into Alamo!  We ended up with 86 species for the day!  Bird List: