New Birds for a Nonagenarian

Ken was yet another ABA lister from Washington state who initially called me about the Fork-tailed Flycatcher in Houston (!), but after chatting a bit he decided the Crimson-collared Grosbeak was a local life bird worth chasing, so he made arrangements to fly down for it!  We were booked, so I picked him up at the La Quinta and we headed to Quinta Mazatlan (thankfully the predicted 80% rain had dissipated)!  We got there when the park was still technically closed, but the gate was wide open, so we waltzed in, and even Colleen the Manager waved us towards the amphitheater as they weren’t quite set up to take our money yet!  So we headed over (Ken was fascinated by the sculpture of the Altamira Oriole nest) and had a seat expecting to wait as long as it took for this bird to show up.  Well!  Within five minutes the bird suddenly appeared on the “crossbar” feeder, and at first Ken was taken aback as he was expecting a male, not the green female!  But she just put on a great show, wolfing down her breakfast for a good long spell, giving us both lengthy looks and even a couple of videos! 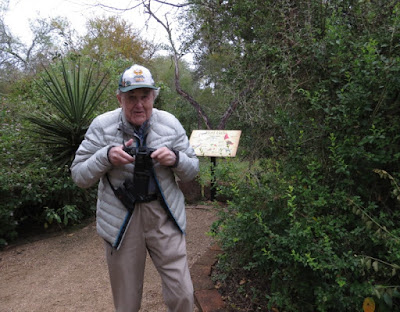 Ken gets his camera ready! 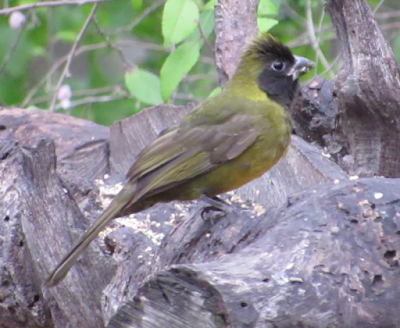 
Having chased birds for most of his 92 years (well, starting in college), there weren’t a whole lot of opportunities to add to his life list, so the only other potential lifers were the Golden-crowned Warbler and the feral White-winged Parakeet that was hanging with the Green Parakeet mob up on 10th and Trenton (he was also considering the Yellow Grosbeak until I told him it was a six-hour drive from here), but he was very interested in the reported Roadside Hawk for his ABA life list.  On the way we swung by Hidalgo for the Monk Parakeets, which we heard nicely but they were snug in one of the neighborhood’s ebony trees and just wouldn’t show themselves.  That was good enough for him, so from there we headed to the Border Patrol corrals by way of Granjeño in case the Ferruginous Hawk was visible in one of the fields.  It wasn’t (and granted, we didn’t look real hard as it wasn’t a life bird for him), so we headed on to the “kite spot” by the corrals, picking up a couple of flyover White-faced Ibis on the way.  I was curious about this reported “gate” that was to keep vehicles from driving up on the levee, put it was just a wire rope between two poles…


As we pulled up the group from Massachusetts Audubon (led by David Moon) that was staying with us at the Inn was coming down from the levee with sad faces, but knowing that they had many places to hit, we didn’t let that discourage us as I suggested to Ken that we should probably give it at least an hour.  It was quite breezy and nippy up on the levee, and the only raptors we saw were a pair of Caracaras powering by; even the songbirds were rather quiet!  Birding buddy Huck Hutchins came by so we all chatted; meanwhile the Ringed Kingfisher blasted down the canal like last time, but he didn’t “park” so that Ken could get his photo… L

Ken patiently waits for the Hook-billed Kites on the levee!

Ken had had his fill of the cold long before the hour was up J, so we tootled over to Frontera with a potty stop at the Exxon station (I got a wonderful cinnamon cappuccino while Ken got a sandwich and bag of Fritos on which he didn’t notice the “flamin’ hot” label… L).  The Golden-crowned Warbler had been seen the day before, so we made the loop several times, listening and looking, but not finding anything but a Kiskadee and several moaning White-tipped Doves.  So we headed over to Valley Nature Center where a second (!) Golden-crowned Warbler was spending the winter, and were directed to the feeder area where the bird often hung out.  While waiting we enjoyed Orange-crowned Warblers (one with no feathers on his face) and Chachalacas coming in to the PB mixture (the birds seemed to ignore the seed and grapefruit), and at least heard a Wilson’s Warbler chepping behind us.  Before long a gentleman who had found and photographed the bird several times on several days came and retrieved us, as he had the bird right around the corner!  Sure enough, I heard the distinctive Green Kingfisher-like ticking, and there was the little guy hopping around the roots and vines!  We’d follow him around and he’d give fleeting views; by that time my friends Larry and Linda had shown up, so we continued to wander as Ken wanted to try for a photo.  Before long a guy named Matt found it over by the nursery, so we along with some other folks (including Jon McIntyre and his clients) were finally able to get prolonged views and some blurry photos (I was explaining to the gang that that’s why I try to get video, because a video grab can often give you that shot you could never get by taking a bunch of still pictures of an active bird)!  In between views a Clay-colored Thrush gave his “ringing” call and allowed obscured looks, again frustrating Ken’s attempts at a photo… 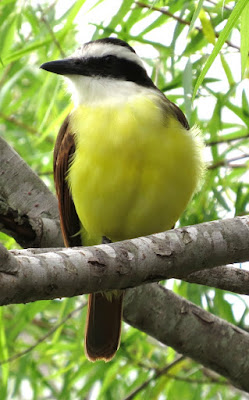 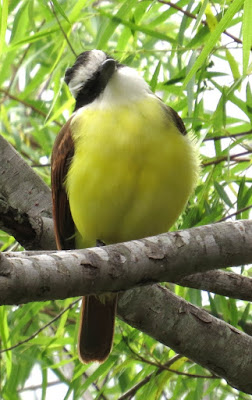 Curious Kiskadee from the boardwalk at Frontera (below) 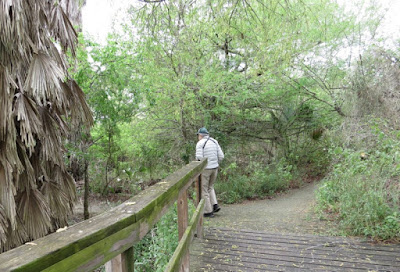 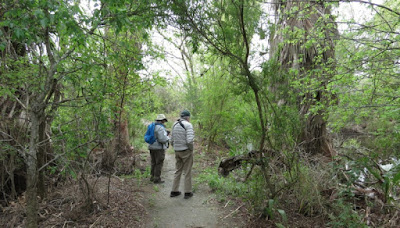 Ken confers with another couple of birders 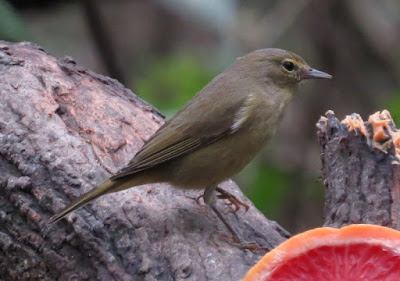 Over at Valley Nature Center, an Orange-crowned Warbler goes after the peanut butter... 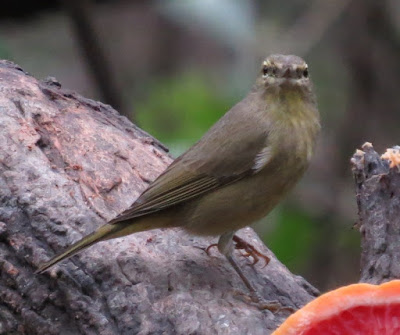 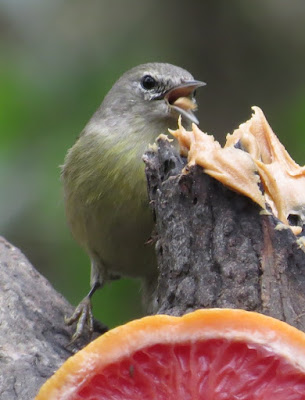 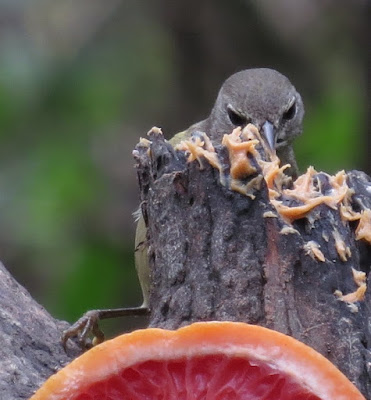 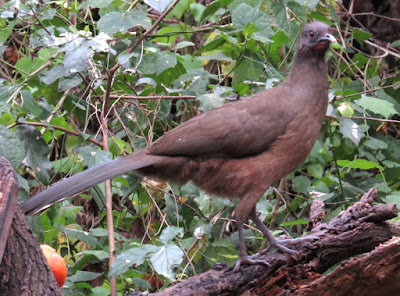 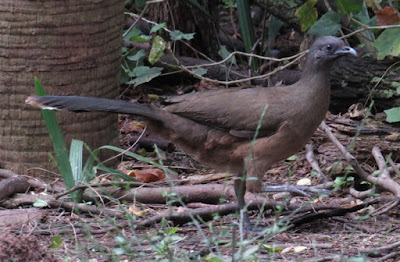 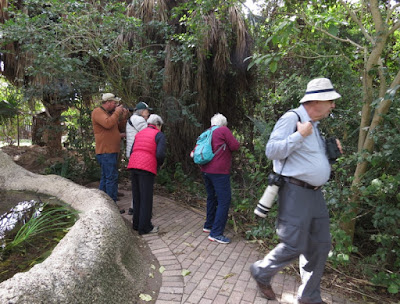 Hopeful birders descending upon the elusive Golden-crowned Warbler (below) 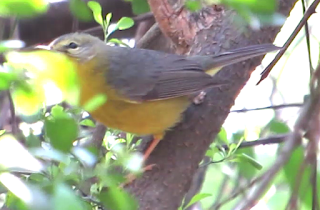 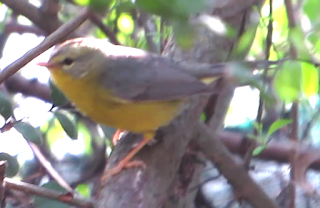 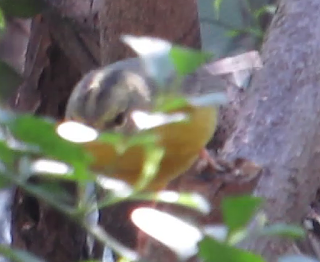 Fuzzy, but you can see the striped crown

We ran into the Mass Audubon bunch again on the way out, and our plan was to kill time at Estero Llano Grande SP until it was time to head north to McAllen for the parakeet show!  We made another stop at a Stripes so Ken could get a bag of “non-hot” chips J, then headed to the park, where the Mass Audubon group had beat us there!  We settled down at the deck with some of the folks (I fell off the wagon and got an ice cream cone J) and enjoyed the pretty Shovelers and Green-winged Teal, checked out the swallows swooping past, and poured over the flock of Least Sandpipers that would often take off and do their perfectly synchronized flight!  Both flavors of yellowlegs gave good comparative views, and a pair of White Ibis that were halfway between adult and immature plumage posed on a dead log.  Half of the group had gone to Alligator Lake to get the Pauraque, but those who stayed at the deck got to see the big flock of Roseate Spoonbills that went over!  It wasn’t long before Ken also fell off the wagon and got himself an ice cream cone as well, J  but a report of Olive Sparrows coming to the Indigo Blind got us hiking back into the Tropical Zone (Ken needed a picture).  All we got was exercise (and some loving from a couples’ friendly German Shepard J) as there wasn’t a bird to be seen there; even the hummingbirds didn’t come in (although I was hearing Buffbellies here and there)!  So we decided to head on up to McAllen. 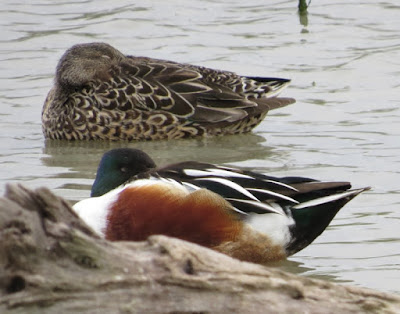 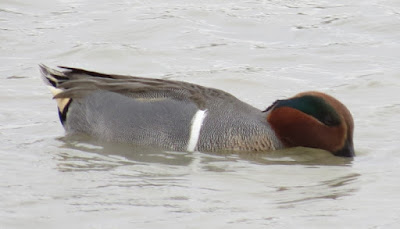 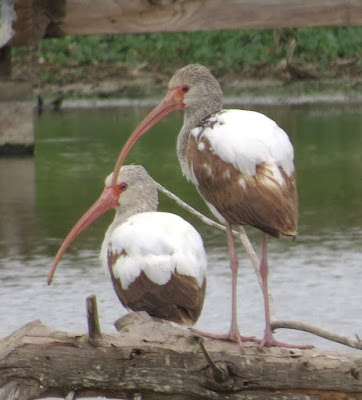 
Pulling into the HEB parking lot on Trenton, there were already a few Green Parakeets on the overhead wire, but before long bigger flocks started coming in and lining up along 10th.  So we took the scope and traipsed down there (running into Linda and Larry again), and as the mob got bigger and bigger (both the birds and the people – Jon plus the Mass Audubon group showed up once again J), suddenly Linda spotted the White-winged Parakeet right over our heads!  (And I learned the hard way not to stay standing there… L)  It disappeared and came back a couple of times, but Ken was finally able to get his shot! 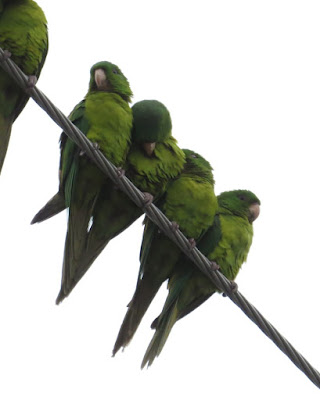 A few of the Green Parakeets staging on 10th Street 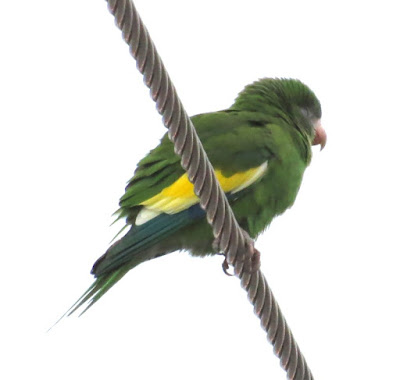 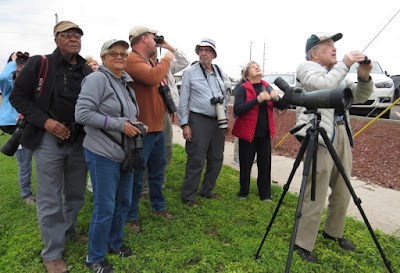 Happy campers Larry, Linda, Jon and crew, plus Ken on the right

We were all beat after that, so called it day and headed straight down 10th to drop Ken off, finishing with a modest 65 species for the day.  Bird list: