Gwen, Gail, and their dad Ron came in from all over the continent (literally – Gwen lives in Canada) to meet and bird in south Texas for the first time (they explained that this was a "bucket list" trip for their dad)!  They greeted me with the news that they got their life Black-bellied Whistling Ducks the night before sitting on our mailbox, and a couple of common urban specialties at Bill Schupp Park!  But by the time the day was over, the girls were right:  octogenarian Ron left us in the dust and wore us all out! J


We deviated from the original itinerary a little as some of our current rarities were of interest (as well as the local specialty targets), so we started at Quinta Mazatlan in hopes of bagging the continuing Crimson-collared Grosbeak.  A Ladder-backed Woodpecker sat up on a dead tree in the grass lot, an Orange-crowned Warbler led us all around the parking lot, and a Curve-billed Thrasher gave us a somewhat obscured view.  Probably the most unusual sighting was a pair of Long-billed Curlews flying overhead!


Once in the park some murmuring Chachalacas got us on the side trail in hopes of seeing them on the ground, but they actually eluded us.  The trail was really pretty devoid of birds until we got close to the Ebony Trail, when I suddenly heard the grosbeak doing its high wheeoo! call!  She remained hidden as we followed the sound, and sure shootin’, she was headed straight for the amphitheater, where a handful of other guys were already waiting.  We took our seats, enjoying a few Chachalacas that were already looking for food and mooning each other, along with the occasional Kiskadee and Green Jay.  Shortly John Brush came in with the goods, reminding us that the grosbeak often came into the Potato Tree, the leaves and fruit of which is a favorite food.  It wasn’t long after that that she suddenly appeared, on the same feeder that Ken and I saw her on earlier in the year!  That was hard to beat, but on the way to the visitor center to pay our entrance fee we got sidetracked by a Clay-colored Thrush where they were setting up for some event, plus a pair of Tropical Kingbirds that tittered and went flying over the trees! 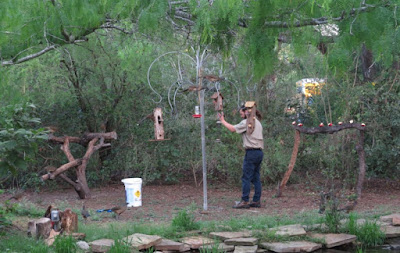 Park naturalist John Brush fills the feeders (note the Chachalacas gathering around him)!

The Tropical Parula at Santa Ana was of interest, so we tootled over there next.  The outside feeders were a hit with their first White-tipped Dove, in addition to more Green Jays, Kiskadees, and of course Redwings.  Up on the levee a raptor was coming at us that turned into a lovely Broad-winged Hawk!  Heading towards Chachalaca Trail we heard a Verdin fairly close, so we poked a little down the Tower Trail to get a backlit view of that bird (Gwen – I think – said she saw the “yellow beard” through the sun, and someone mentioned that it reminded them of Tweety Bird with such a tiny bill)! 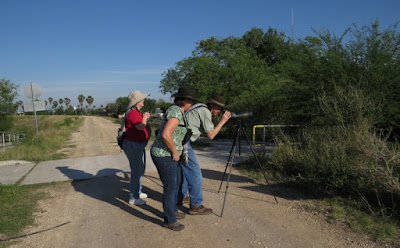 Gail, Gwen, and Ron enjoy a Couch's Kingbird (below) from the levee 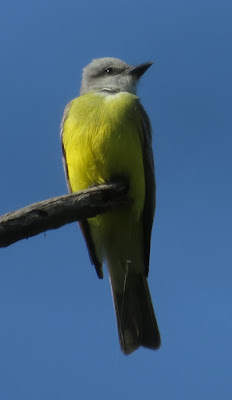 Getting back onto Chachalaca some got a fleeting look at an Olive Sparrow, and I heard the Beardless Tyrannulet and Long-billed Thrasher in the distance, but we could never get on either of them.  The Altamira Oriole was whistling happily, so we were headed in that direction when I heard the buzzy zhreeeeeeee-tsup! of a parula (and since both Northern and Tropical sound the same around here, and both had been reported, I had no idea which it was)!  So we stalked that until it suddenly quit singing, so since we couldn’t find it, we checked out the waterfowl on Willow Lake for a bit, logging their life Least Grebes (we also heard Pied-billed), plus the normal ducks, including a nice pair of Cinnamon Teal that Ron spotted.  Before long I heard the parula start up again, so we headed back to the connector trail and felt like we were right on top of the thing when another birding party approached from the other direction; I got their attention and got them looking as well, when the girls finally spotted it, and when I finally got on it, it was definitely the Tropical!  Bingo!  Some other birders that had come up behind us also got to see it, so that was a great blessing! 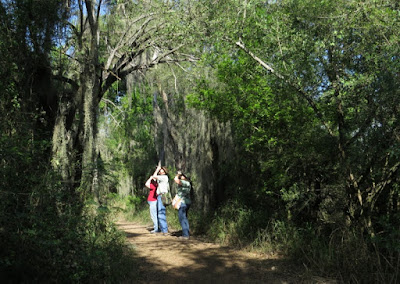 On the Chachalaca Trail

Continuing on, the Altamira suddenly shot through near the big blind, and then sat right out in the open for us!  A Lesser Goldfinch wasn’t quite as cooperative…  Gail (I think) spotted the Marsh Wren that had been calling as it dove into the reeds, and we got good looks at the Common Gallinules, but the Soras remained hidden.  Another raptor way up there turned into a pretty Swainson’s Hawk, and a Couch’s Kingbird gave us a nice scope view as well.  On the way back I showed them the tree snails that the Hook-billed Kites like to eat, including a pretty striped one!  Going back over the levee what I was hoping was a Swallow-tailed Kite morphed into a White Pelican, and back at the visitor center we watched the feeders that are just outside the building, and enjoyed a couple of Buff-bellied Hummers fight over the hummer feeder! 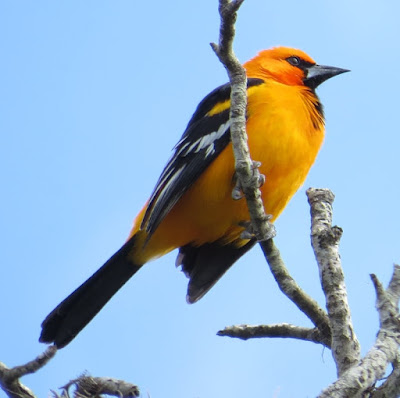 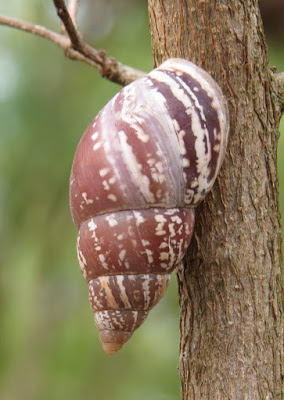 From there it was time to hit Estero Llano Grande State Park (the place we were scheduled to visit first J), and after checking in, the volunteer lady informed me that the Alligator Lake Pauraque was moving her babies around and was hard to spot, but that the one in the Tropical Zone had been pretty reliable, so after padding the list with more ducks and shorebirds from the deck, we headed back there.  We added a gnatcatcher and kinglet along the main road, but before long we caught up with Huck and Tom’s bird walk where they were focused on something, and when he saw us Huck beckoned us over!  I had no idea what they had until we got close enough to hear him say “ani”, and sure enough, a cute Groove-billed Ani was in the bush right at eye level!  And it wasn’t long before he came shooting over and sat at our feet!!  One poor lady lost her balance squatting to get a picture and slowly rolled over, but that turned out to be a better vantage point as she (and the bird) stayed put for pictures! J 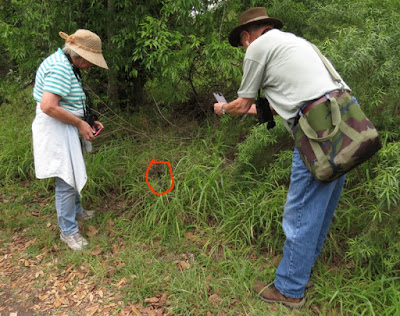 Ron and an unknown birder (also below) shoot a friendly Groove-billed Ani (circled in red) with their iPhones! 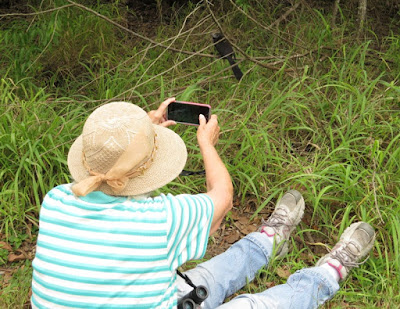 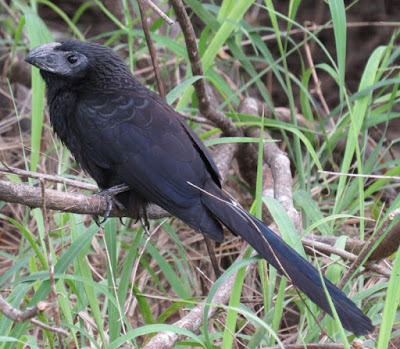 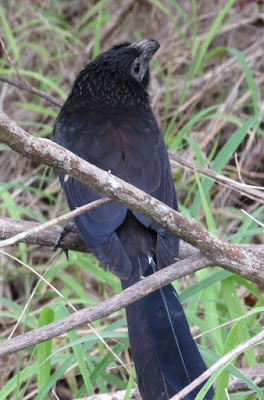 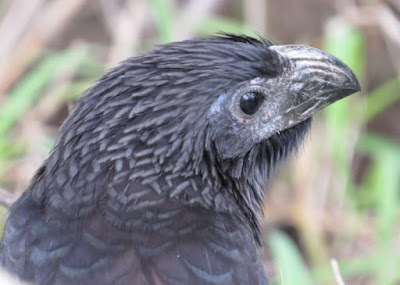 I mentioned the Pauraque and Tom said he could take us right to him, so Huck gathered his flock and went the other way while Tom took us down to where “Bernie” was hanging out, and had he not pointed him out I’m not sure I would have found him, even with the lady’s precise directions!  (He was facing us, so that always makes it a little trickier…)  So we enjoyed him for a bit before hitting the Indigo Blind, as the Olive Sparrows had been coming in there and at the open platform feeder (which we would hit next).  We had a delightful time at the blind, enjoying close Golden-fronted Woodpeckers, Black-crested Titmice, more Green Jays and White-tipped Doves, and a cooperative Lincoln’s Sparrow!  After about 15 minutes we hit the open feeders, where a female Black-chinned Hummingbird came in to the hummer feeder, and we enjoyed a better look at the Curve-billed Thrasher that was making a nest in the cactus!  But before long, there was the Olive Sparrow, right out in the open (along with two more Lincoln’s), so everyone finally got a great look! 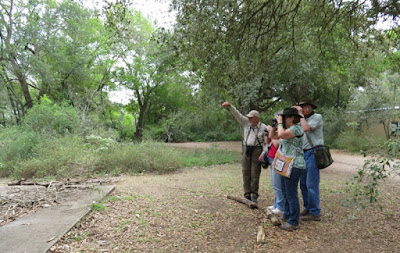 Tom points out "Bernie the Pauraque" (below) to the gang 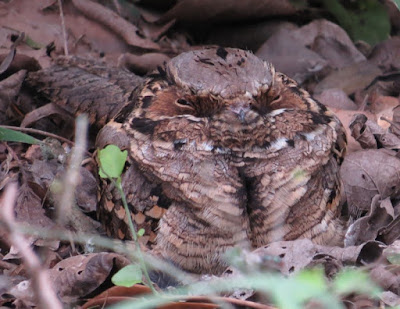 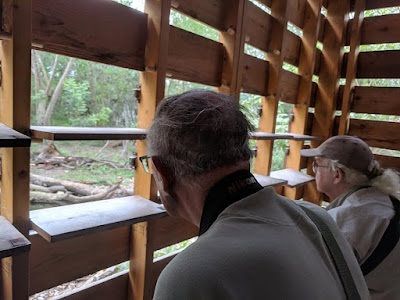 Waiting patiently in the Indigo Blind (photo taken by one of the girls...) 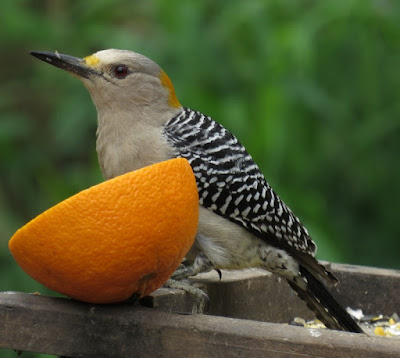 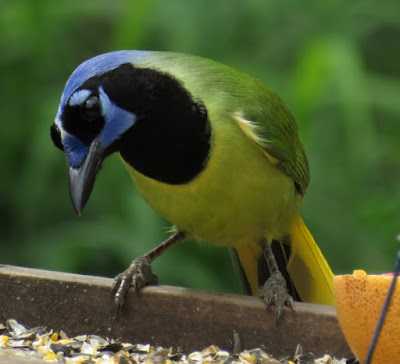 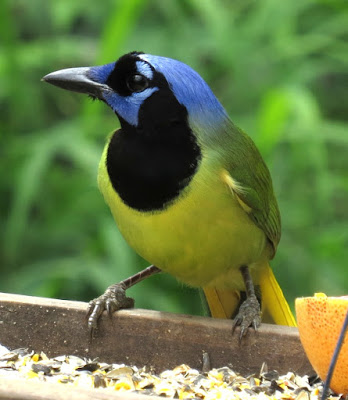 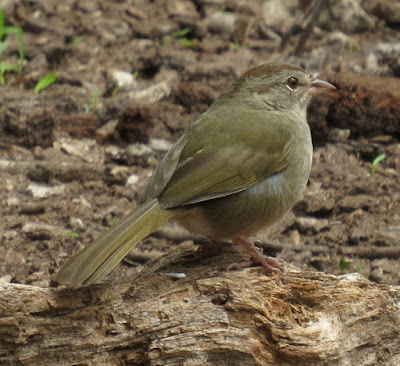 Olive Sparrow at the open feeders 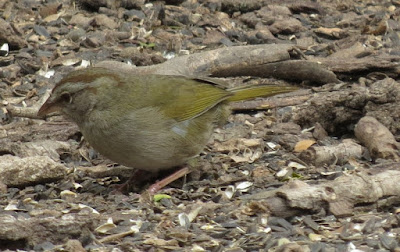 After consulting with Huck again about Screech Owls (nada L), we headed into the main park for a crack at Green Kingfisher at Grebe Marsh.  After being the Good Samaritan (a young mom was taking pictures of her dolled-up little girl, and Ron offered to take a picture of both of them together J) we headed out with a quick look at Dowitcher Pond.  Grebe Marsh had tons of Red-eared Sliders, but no kingfisher, so we went on to Alligator Lake to try there.  After enjoying one adult and several immature Yellow-crowned Night Herons, a Green Kingfisher finally shot by and then circled around, landing on a stalk where we could get scope views!  High fives all around!  A young Harrier circled around at the kingfisher spot, and while dragging ourselves back to the deck (where most of us indulged in an ice cream J) a nice Harris’ Hawk sailed overhead!

From there I thought Edinburg Wetlands might be a good place to try for the Ringed Kingfisher, so we headed up there next.  We logged a Caracara on the way in, and once in the park we found a little feeding flock that had a couple of Wilson’s Warblers in it.  The north pond had their first Neotropic Cormorants (along with a few Anhingas) and another noisy Green Kingfisher (and Heron for good measure), plus a couple of high-diving Forster’s Terns, but alas, no Ringed Kingfisher.  The place was alive with Cardinals, however, and Gwen commented on how bright even the female’s bill was (a real “Maybelline Moment” she said J)!  The only thing we spotted at their little blind was a House Wren; we didn’t even kick up a Long-billed Thrasher in there, but that gave us something to look for the next day! J


We ended up with 81 species for the day close to 30 life birds for my charges!  Bird list: