Barbara, whom I had taken out in December to help clean up her Texas year list, had cottoned me onto eBird’s “Year Needs Alerts” (which is what she used to plan her strategy), so that got my chase juices going seeing as we’ve had so many rarities in the Valley lately!  Cameron County had the most at the moment, so my friend Pat Heirs joined me as she was also interested in some of the targets.


Although the Spotted Towhee and Cackling Goose hadn’t been reported during the last week, we decided to give Cannon Road/Adams Garden Reservoir a shot.  We went in by the north end where it was still quite foggy, only to discover that you can no longer drive up onto the reservoir dike!  We ended up parking at the south side and walking up, where there were a few White Pelicans, and several scattered cormorants and Shovelers, but no goose flocks.  However, we soon heard distant Snow Geese, and before long they were coming out of the haze right towards us, hundreds and hundreds of them!  A couple were small enough to comfortably call Ross’ (another target for the year), but the Cackling had been hanging out with some White-fronted Geese, and they were nowhere to be found…  So we crawled down Cannon, stopping and listening every so often; no towhee, but we added several Valley specialties for the day (it was kinda fun hearing a Carolina Wren out one side of the window and a Bewick’s out the other – normally they prefer very different habitats), plus a White-tailed Kite!


Once at US 281 we decided to bypass Resaca de la Palma and the reported Tropical Parula, and go straight to UTRGV Brownsville for the Black Hawk (as that would be a state bird for me and a county bird for Pat) and the Greater Scaup.  I had only been to this area a couple of times, so when we saw a footbridge we pulled into this big open parking area and headed over!  We ran into another couple who didn’t think we were on the right bridge, but in the meantime we enjoyed several feral Muscovies and a few herons.  Others had told me that they had parked at the bookstore, so we headed over that way and discovered that there was another footbridge, and that’s where the hawk was (thankfully we spotted some other folks already enjoying the bird)!  He put on a great show, hopping from branch to branch, and Pat had fun doing a Donald Duck impersonation to one couple’s little girl! J  The place was quite birdy, with two Green Kingfishers close by and the other two species vocalizing unseen, both kinds of grebes, a snoozing Anhinga, the resident Black Phoebe, singing House Finches (one of the expected spots in the Valley for them), and a big flock of Red-crowned Parrots that flew overhead a couple of times!  Pat spotted the scaup pair on the far side; at first I was uncomfortable calling it a Greater as I thought I was seeing a hump (they were snoozing), but as they turned circles as they floated I eventually got a flat-headed look. 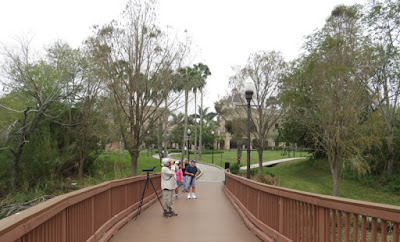 Pat checks the Resaca from the footbridge 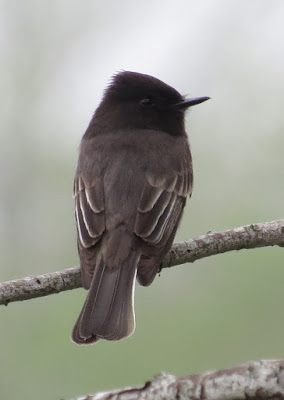 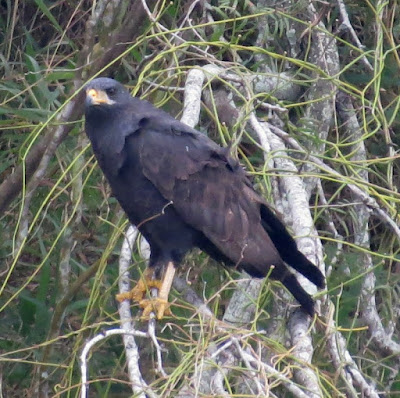 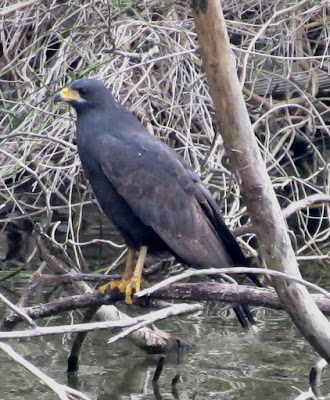 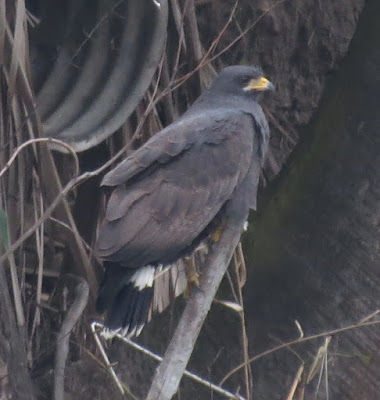 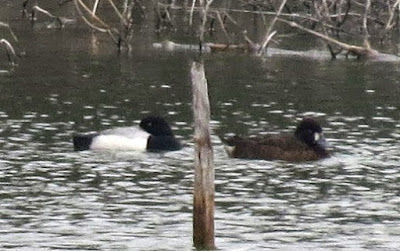 
We headed back to the car and then stopped at Subway to grab a sandwich, then headed over to Boca Chica.  Pat had mentioned the Monk Parakeets that had been seen at a mobile home park, so since that was also a county bird for her (and for me, too, actually), we swung in, but didn’t hear the birds until we had gone full circle and were actually outside the park when we got our best views!  They were definitely nest building in the palm, so it looked like a new colony was forming! 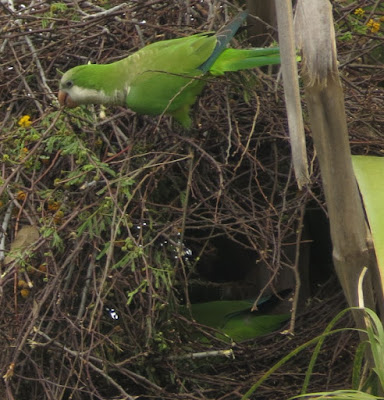 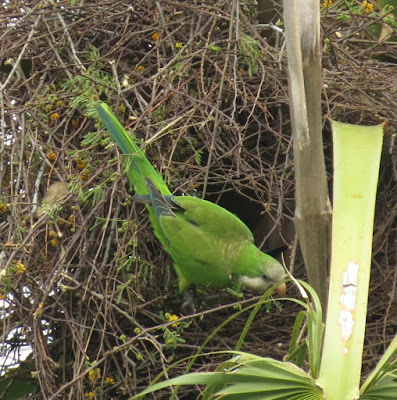 Monk Parakeets working on their nest

I knew the Boca Chica targets (Whimbrel, Red Knot, Gannet, and Lesser Black-backed Gull) were probably all longshots, but we dead-headed (to use Pat’s term J) to the beach, picking up a flyover flock of Sandhill Cranes on the way.  We didn’t get far anyway due to the incoming tide and roiling waves; what gulls we did see were just Laughing and Ring-billed, and the fog was too thick to scan for Gannets, so we headed back and stopped at the big shorebird mob we had seen on the way down.  They were waaay out there, and most of them were unidentifiable, but we managed to add a few species for the day, including a white morph Reddish Egret, several Pintail, and a pale-headed first-year Herring Gull that had us giving it a second and third look!  A few Horned Larks shot across the road, and we didn’t spot any Aplomados, but we really didn’t look super hard as we were on a time schedule!


Next stop was Laguna Vista Nature Park, as Zone-tailed Hawk (while not reported recently) would have been another county bird for Pat and a year bird for me, so we got an exercise walk in at the cute little park (and picked up a Buff-bellied Hummer at one of the water features), but that was about it.  On to Laguna Atascosa, where a very dark immature White-tailed Hawk soaring over Buena Vista Road has us going!  At the visitor’s center the rangers told us that the Blue Bunting had been reported (last week) along the picnic area parking lot.  (I also teased the guy mercilessly because he said the new Bayside Drive was going to be finished late spring/early summer – they’ve been saying that for years, but he said that this time it was the real deal!)  The female ranger had seen their Tropical Parula that morning, so we made a loop around Kiskadee Trail looking for the feeding flock.  What we did find was their wintering Rose-breasted Grosbeak – not a target as we knew they’d be coming through in droves before long, but it’s always nice to get a rarity!  We enjoyed Green Jays and Cardinals at the gazebo feeders, but a stroll along the edge of the parking area yielded no bunting (I really didn’t expect it to…).  So after falling off the wagon and purchasing a Diet Coke J we headed over to Osprey Overlook to look for the reported Eared Grebe. 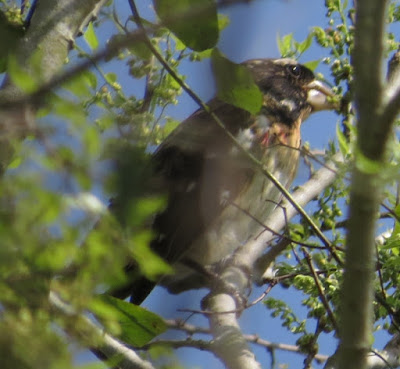 The lighting was actually pretty good, but most of the stuff was way out there and the heat waves were pretty bad.  The dominant water bird was Coots, Coots, and more Coots, with a few Pied-billed Grebes thrown in.  So giving up on that (my “get ready to go home alarm” had gone off) we headed out General Brant Road, as American Bittern and Grasshopper Sparrow had been reported along the Prairie Trail.  I probably should have called Tamie, my friend who made the report, because that hotspot also stands for the overlook of the marsh, and I had no idea whether they had actually hiked the trail.  At any rate, we weren’t gonna hike the trail in that heat (plus, we had to get going), but a perusal of the marsh from the road just added Common Gallinule and a crying Sora.  We even missed the Alligator that some locals found!


We called it a day after that, with a respectable 89 species!  Bird list: