Off the Beaten Track Again!

My Canadian friends Linda and Murray were back for more, and this time they brought their long-time birding buddy Patty with them!  They wanted to go to “out of the way” places, and since seeing a Roadrunner was high on Patty’s list, La Sal del Rey seemed like the logical place to go!


We started on South Brushline Road just off FM 490, and we didn’t get very far:  right at the start a brilliant Painted Bunting was singing!  A little down the road some Clay-colored Sparrows were also tuning up, but we couldn’t get them to come out; more cooperative were the Lark Sparrows fighting with each other!  We also stopped for Pyrrhuloxias, Olive Sparrows, and Verdins, and the bunting followed us the whole way!  I heard Dickcissels flying overhead but never could spot one, while various swallows gave better views along the way.  One of the more exciting sightings along this stretch was a Nilgai that hightailed it into the sorghum field!  Black-bellied Whistling Ducks entertained by claiming several posts along a field, and a Common Nighthawk silently batted by. 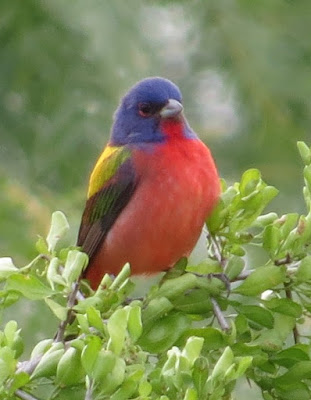 Painted Bunting (proclaiming his territory below) 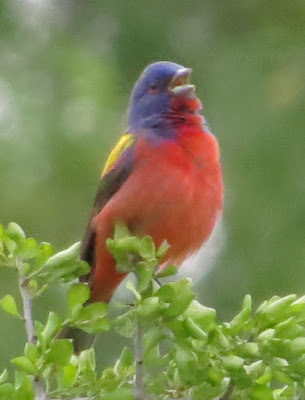 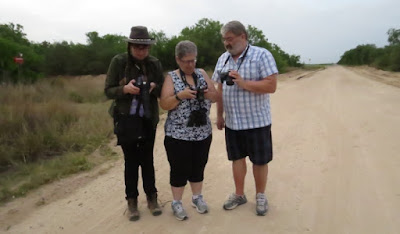 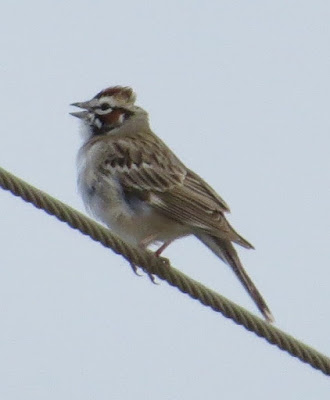 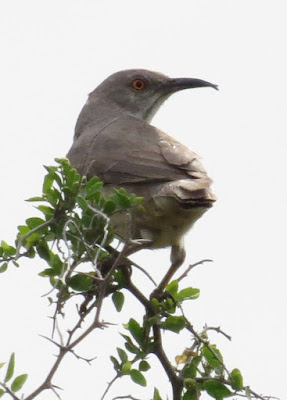 I didn't notice until processing the pictures that this Curve-billed Thrasher had a bill deformity!

Big on Linda’s want list was the Scissor-tailed Flycatcher, and while we saw plenty on the high wires, I was waiting for the wire fencelines so she could get really good looks!  We had to cross SR 186 for that, and in addition to the flycatchers, one dead bush had a Cassin’s Sparrow singing away!  Several Bullock’s Orioles chattered and sang, but it took awhile before we could get good looks.  Bobwhite were calling all over, but a pair gave only a fleeting glimpse running across the road.  A Bewick’s Wren flew back and forth across the road and finally sat for a view, and several Javelina crossed the road at various points along the route. 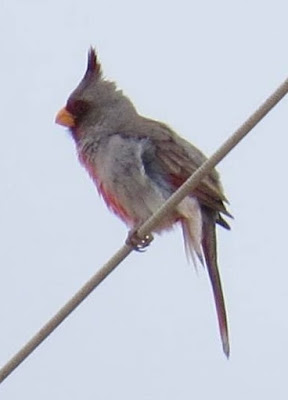 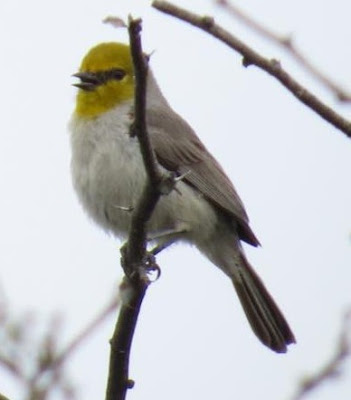 
We decided to hike the trail to the lake, which was very enjoyable:  a Verdin actually sat out in the open and chirped at us!  A pair of Yellow-billed Cuckoos duetted us in stereo as well, and a Black-crested Titmouse sat up and sang!  A Blue Grosbeak gave passable looks, and just past the potties were three White-tailed Deer (and my charges were amused by the fact that apparently the Nilgai and deer have their own designated “potty places” along the trail…), but the real treat was a “bird-nado” of Franklin’s Gulls wheeling and squealing overhead!  We heard both Cactus Wrens and Green Jays in the woods, but they didn’t want to show themselves…  Once at the overlook, at first I couldn’t see anything on the shore of the lake, but suddenly two bodies materialized against the water, and as we got closer, we could make out the pale coloration and start-n-stop behavior of the Snowy Plovers!  On the way back Linda and Murray spotted a Coyote close to the trailhead! 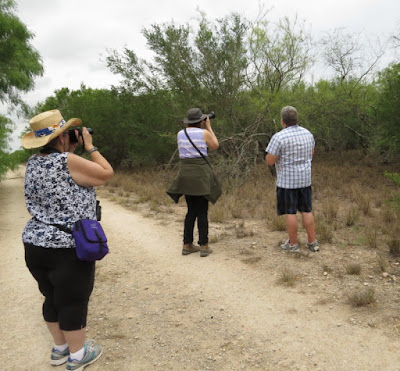 The gang shoots a very cooperative Black-crested Titmouse (below) who sang for us! 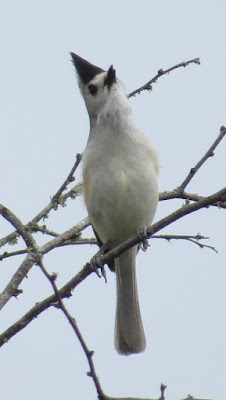 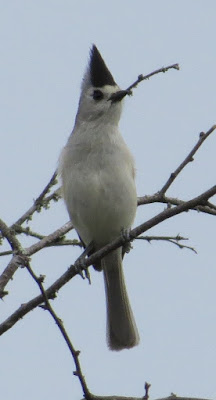 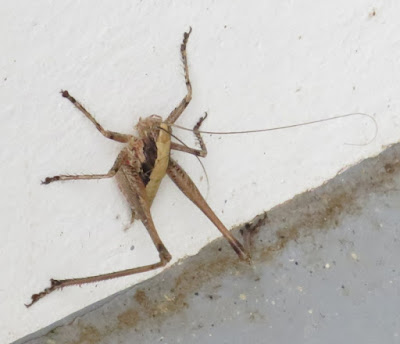 Shield-backed Katydid in the restroom

Continuing on, we managed good looks at a White-tailed Hawk, Common Ground Doves, and Brown-crested Flycatchers, but right in the middle of a mouthful of steak sandwich the Roadrunner appeared in front of us!  Two of them actually crossed the road, and then a third one appeared on the right and just stood and preened, and then after a bit started running towards us, then took off flying!  You don’t see that very often!  Patty was pleased as punch after that encounter!  (Processing the pictures later revealed a second bird behind us that we never saw!) 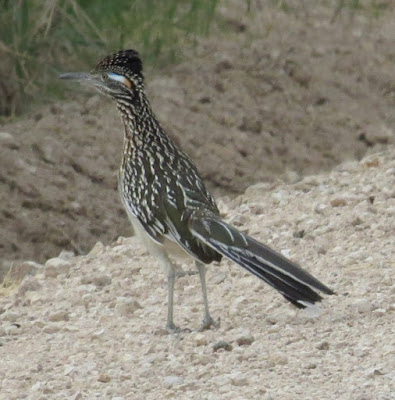 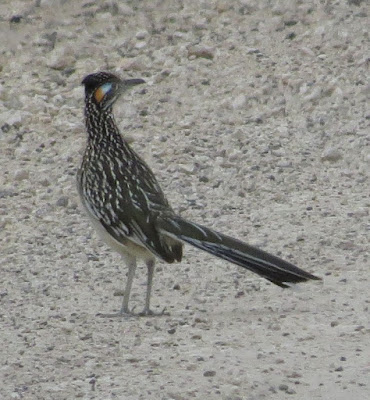 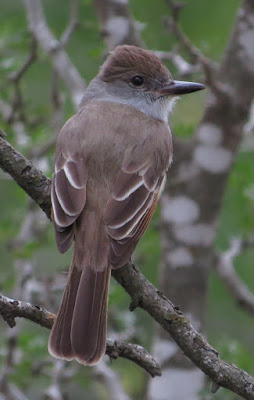 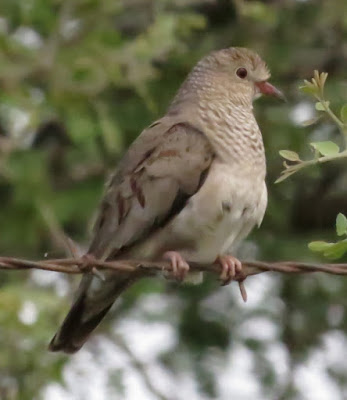 
On the north stretch of Brushline an Ash-throated Flycatcher called and gave views, and Patty spotted a male Indigo Bunting right by the car!  We found a couple of Swainson’s Hawks in with a kettle of Turkey Vultures, and a Caracara finally sat on a pole so everyone could get pictures!  At the pond we had a nice variety of things, including Cattle and Snowy Egrets, the stilts, and several kinds of shorebirds including a couple of White-rumped Sandpipers (showing very nicely next to a Semipalmated and a Least for good size comparison)!  Linda enjoyed the Stilt Sandpiper that seemed to be swimming for his supper!  Coming back we had the Harris’ Hawk pair, another bird Patty wanted to see. 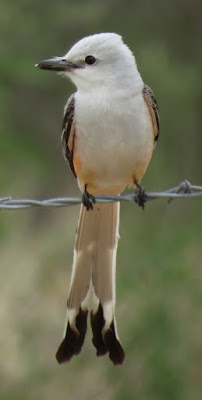 Scissor-tailed Flycatcher (showing off his salmon colors below) 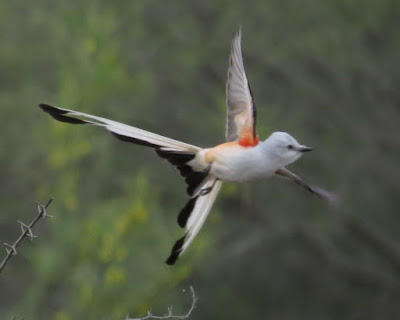 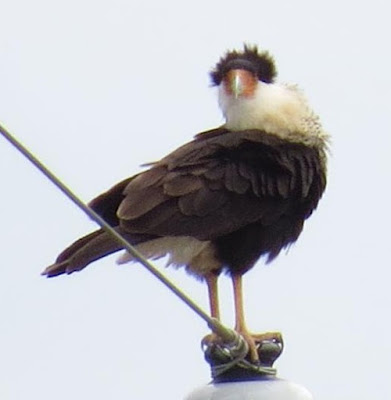 Linda got this great shot of a Crested Caracara having a Bad Hair Day!
(Photo ©2018 Linda Dow-Sitch) 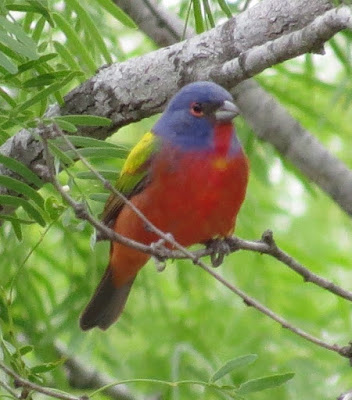 Yet another Painted Bunting by the road...

Heading back down towards Ken Baker, we ran into another birding couple who were looking at the same Bullock’s Oriole we were looking at, but they had also found some Lark Buntings!  Knowing that they’d be flagged (and that it was probably the same flock I had last time) we spent some time waiting for them to pop up, and finally several of them flew past and into a tree where we could pull up and get some documentation (this time I found three turning males in the group)!  A little further on more Bobwhite crossed the road, so everyone got their pictures before the oncoming car scared them into the bush! 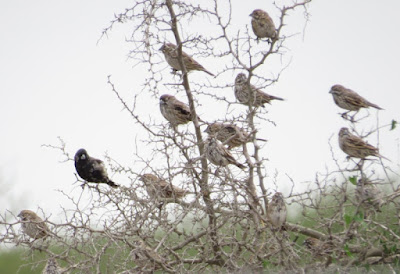 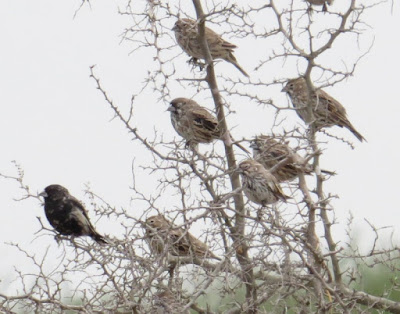 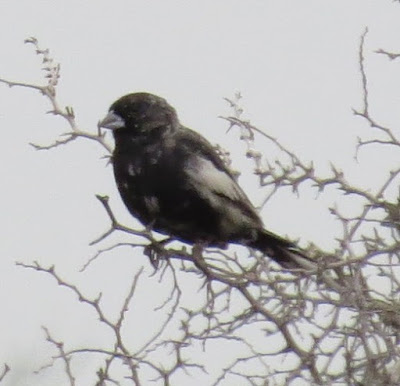 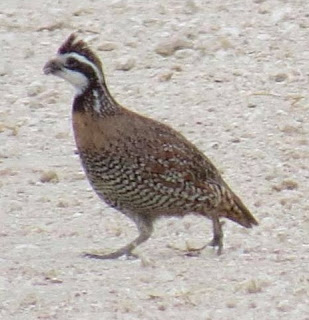 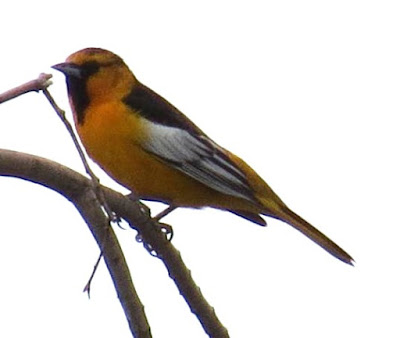 On Ken Baker an Eastern Kingbird joined the Scissortails, and since I had heard that Brewer’s Blackbirds were apparently still hanging around Rio Beef Feedyard, we swung in there to check it out, but only had lots and lots of Bronzed Cowbirds strutting their stuff, a couple even performing “The Helicopter” for us!  Having grown up on a dairy farm, Linda enjoyed seeing the cattle up close! 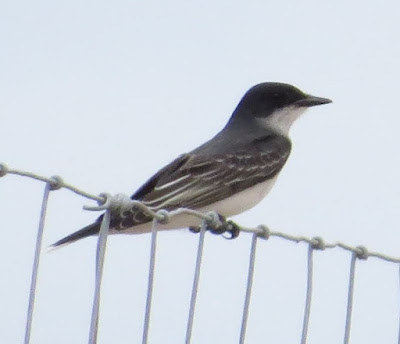 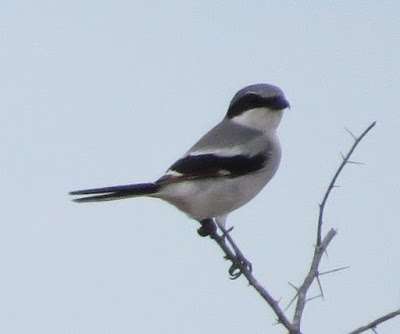 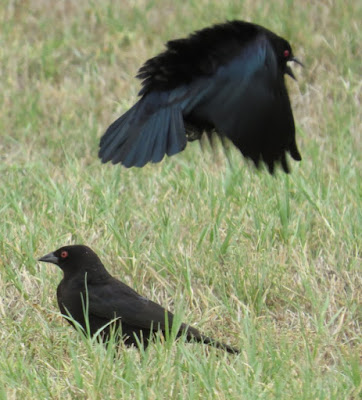 Bronzed Cowbird trying to impress a female by performing "The Helicopter" 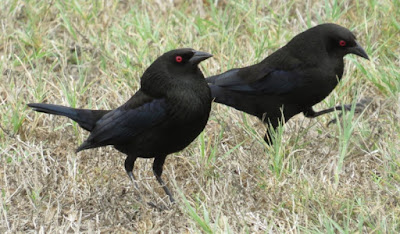 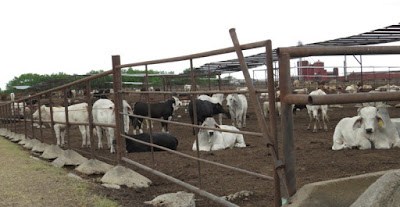 It was time to head home after that, but we got waylaid by a snake on the road!  I wasn’t able to get pictures, but the glimpse I got said either Bullsnake or Rat Snake – definitely wasn’t a rattler.  My charges were excited as they had seen a huge Indigo Snake the day before, and told me that the biggest snake they have back home is about the size of a Ribbon Snake!

Pat was able to snap this shot of our snake, which I think is a Bullsnake.  Photo ©2018 Pat Sein


Finally got going with a respectable 75 species for the day!  Bird list: