Last Outing of the Season

I honestly thought I was done for the season until we got a last minute guiding request from Martha and Breck, a couple from California!  They wanted help with the vocalizations, so we agreed on Estero Llano Grande (which never disappoints J), and since I had made an afternoon visit there on the Hidalgo County Birdathon the day before and saw it was stuffed with shorebirds, I figured that would be a nice rounded experience!


We got there around sunrise, so it was still rather gloomy, but the Tropical Zone was alive with dove song (and lonely-looking now that the Sniders and the other park hosts were gone L); I pointed out the remains of the big tree that had crashed and blocked the entrance the day before, then thankfully the McCall’s Screech Owl was in his box, wide-eyed and blinking at us!  White-winged and White-tipped Doves were the dominant vocalization, followed closely by Mockingbirds fooling us into thinking they were something else J!  Martha likened the song of the Olive Sparrow to a bright-sounding Wrentit, and I tried to explain the difference between the calls of the Brown-crested and Great Crested Flycatchers, but ended up playing the recordings back at the car, as those spoke better than words!


A harsh call got my attention, and sure enough, we caught sight of a Harris’ Hawk fleeing his post, with a mocker hot on his tail!  As we continued down the lane we spotted (and got great looks at) the hawk!  At one point Martha and Breck saw a long-tailed thing shoot into the trees, and shortly after that, in amongst the cacophony I heard a low cou, cou, cou of a Yellow-billed Cuckoo, so we figured that’s probably what they saw!  At the far end I thought I heard an Altamira Oriole giving its short whistles, but then I heard rapid chattering coming from another tree, and shortly the “chatterer” shot into the tree from whence the whistles were coming from, and with a little searching we confirmed it was a pair of Baltimore Orioles (the chattering was a giveaway, of course, but I’ve discovered that the males often give short whistles similar to the Altamira)! 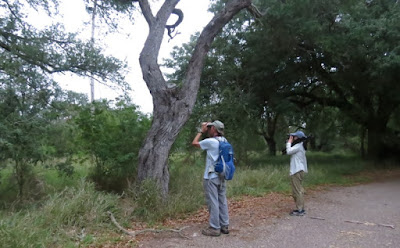 Breck and Martha enjoy a Harris' Hawk (below)! 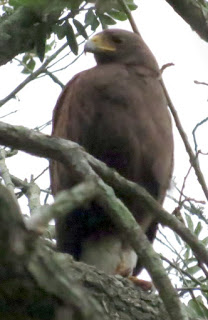 I heard a Rose-breasted Grosbeak pink that we could never locate, but a Long-billed Thrasher provided comedy relief by tossing big leaves high into the air!  We were trying to pull out a Carolina Wren when an uncharacteristically cooperative individual decided to come out and hop along a log!  After that we sat at the drip for a few minutes; it was pretty quiet, so when a nearby Beardless Tyrannulet got our attention, we abandoned the sit and went after him (although he quit calling about that time).  The Clay-colored Thrush was both calling and singing, and Breck was able to spot him in a distant ficus tree!  On the way out we enjoyed a family of Chachalacas making their way across the road!


We headed into the main part of the park, but not before Martha spotted something brown with a white eyebrow; since I was hearing warbler seeps I immediately thought Swainson’s, but when we finally refound the culprit it was just another Carolina Wren… We had yet another leaf-tossing thrasher at our feet, and enjoyed the Buff-bellied Hummingbird on the very same perch he was on the day before during the Birdathon, before checking in.  We spent a considerable amount of time pouring over the shorebirds (and were thankful that it was overcast, as the morning glare off Ibis Pond can be something)!  Close to shore were oodles of Stilt, Least, and White-rumped Sandpipers, with lesser numbers of Wilson’s Phalaropes, Lesser Yellowlegs, and even a single Pectoral and Semipalmated Sandpiper!  One very long-billed breeding-plumaged Least had us going for awhile until it gave us a good look at its legs; the overall pattern was “Western-like”, but not quite as bright.  A fully-spotted Spotted Sandpiper came in, and one very strange-looking Mottled Duck was with a more normal bird (that led to a conversation about the “Muddy Ducks” at the Convention Centre).  So engrossed with the shorebirds were we that we almost overlooked the four Fulvous Whistling Ducks closer to the boardwalk! 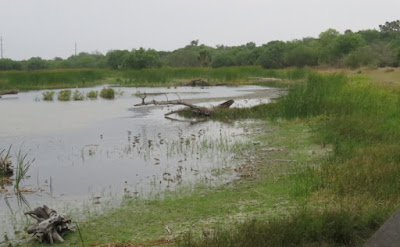 Look carefully for all the shorebirds in Ibis Pond! 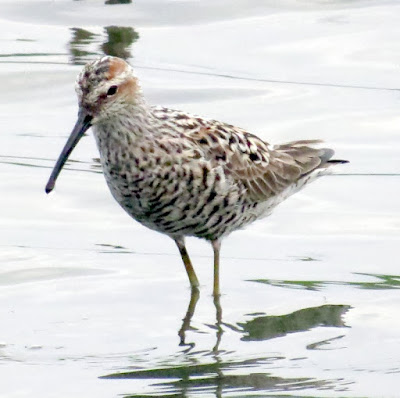 Stilt Sandpiper (in flight below) 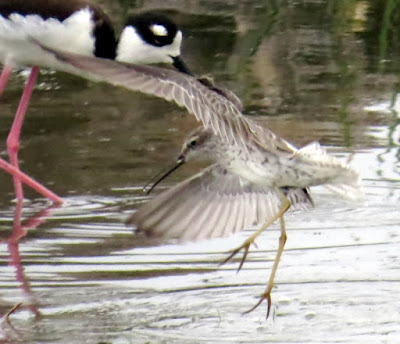 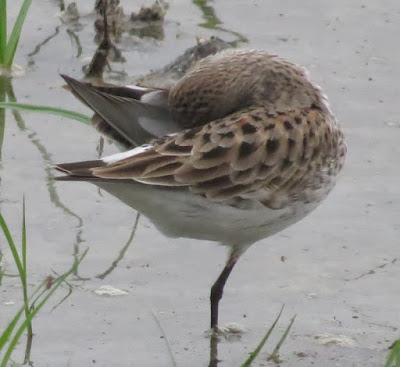 You really don't need to see anything else to know this is a White-rumped Sandpiper! 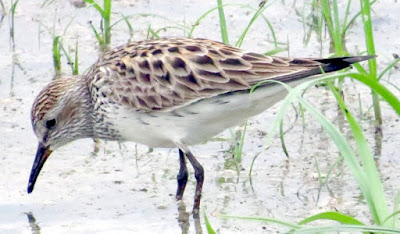 The other diagnostic feature is the reddish base to the lower mandible, visible on both these birds. 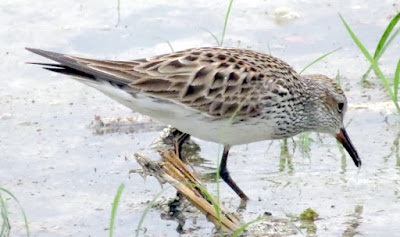 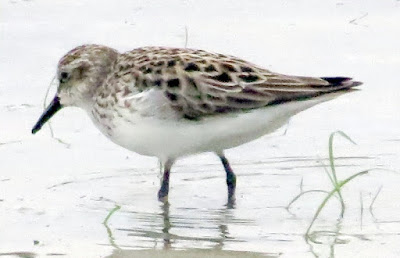 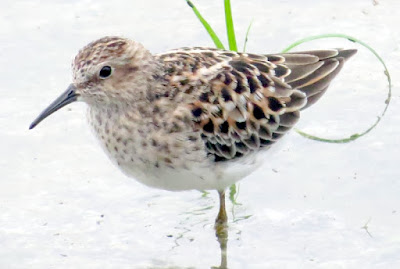 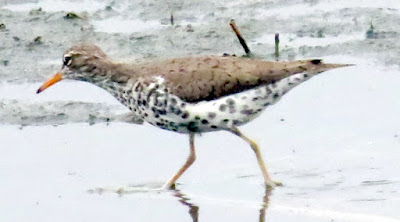 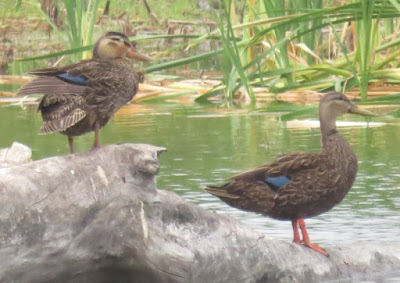 Mottled Ducks, but the one on the left definitely has something else in him... 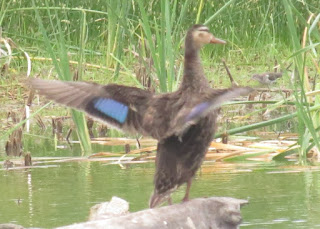 A "Mexican Duck" would have white borders to the speculum, but that head pattern sure suggests Mallard blood in there - thoughts? 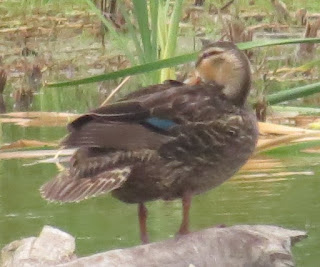 From there we headed out to Alligator Lake, enjoying a Cardinal family near the butterfly garden!  Before even getting to Dowitcher Pond my charges spotted the brilliant Roseate Spoonbills feeding there; there had to be at least a dozen of all ages!  In addition we had several Avocets, a few Shovelers, and a Sora that Breck spotted along the shore!  Grebe Marsh was quite productive, with both flavors of night herons, fighting Green Herons, and a trumpeting Least Grebe that we spent considerable time looking for and couldn’t spot until the Green Kingfisher burst from his hiding place, and while all eyes were on him across the way, that’s when the grebe decided to patter out as if to say, “Hey!  Here I am; don’t look at him!”

At Dowitcher Pond, we're greeted by a mob of spoonbills! 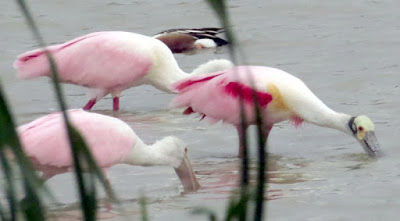 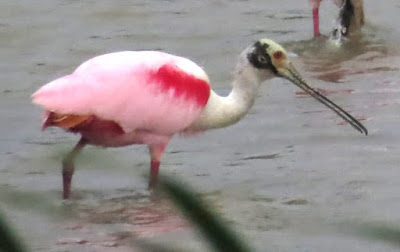 Adults have the green head and black ear patch... 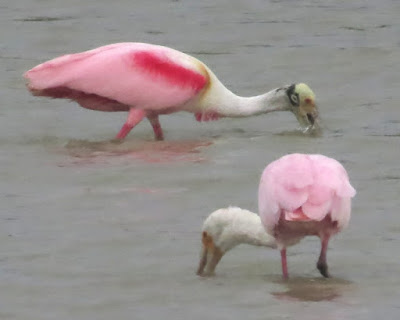 Whereas youngsters still have their white head feathers!

The one on the right is kind of in between... 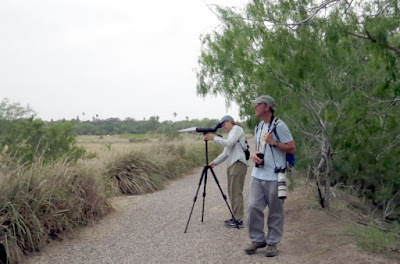 Martha and Breck enjoy the spectacle! 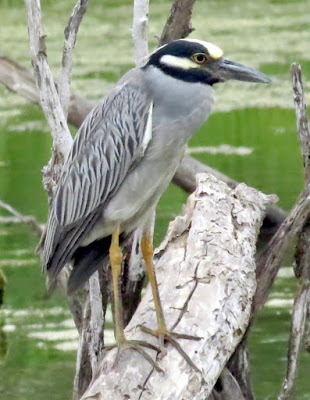 
After enjoying the cormorants at the Alligator Lake turnoff and looking unsuccessfully for an Anhinga, we started looking for the Pauraque, but after a fruitless search figured she was deep in the woods raising babies.  A lady Ladder-backed Woodpecker decided to come in and show off, however, literally hugging the little branch she was tapping on!  Nothing much except the famous Alligator was at the overlook, so after a five-minute rest we headed back, picking up a flopping Groove-billed Ani along the canal! 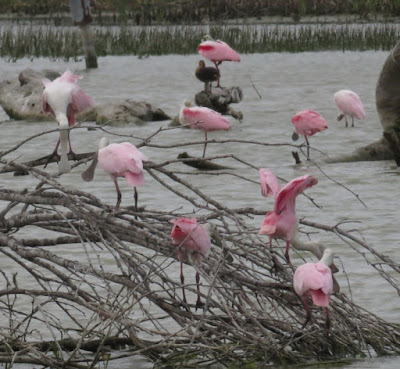 On the way out the spoonbills have finished feeding and are now relaxing on the dead trees! 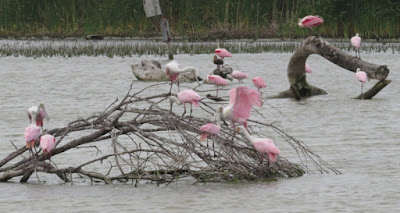 With what time we had we decided to make a short visit to Frontera Audubon in hopes that some migrants might be around.  Mary G. had apparently been there earlier and saw a Black-billed Cuckoo in addition to a Yellow-billed, so we were hopeful, but alas, it was pretty quiet.  We did happen to flush the gang of three Green Kingfishers hanging out at the little resaca, and Buff-bellied Hummers were all over, but the only migrants we saw were brief glimpses of a Black-throated Green and Magnolia Warbler.  But all in all, Martha and Breck were glad to know of the place for future reference! 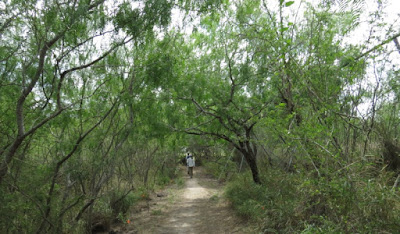 On the trail at Frontera Thicket

For a half-day trip, we managed 80 species, which ain’t half bad!  Bird List: