Today we headed first to the Weaver Road Sod Farms in order to try for “grasspipers”.  I was dismayed at first when I saw that the northernmost field had apparently been harvested as it was all barren ground, but thankfully as we approached viable sod fields we saw some large bodies that turned out to be American Golden Plovers!  We were getting ready to continue and head around the corner to get a better look when I noticed an orange-legged shorebird prancing in front of the car – it was a Buff-breasted Sandpiper!  He continued into the field, giving everyone great views, and even did a couple of display “flashes” for us (even though there wasn’t another Buffie within miles, probably)!  In the process of enjoying him the gang found several Horned Larks, which were new for the trip for them. 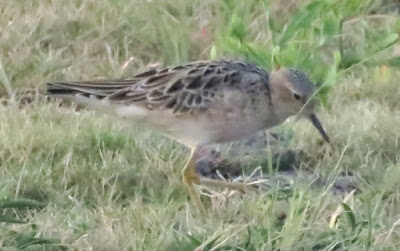 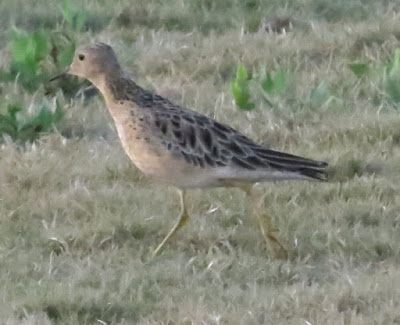 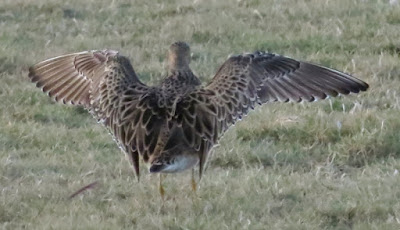 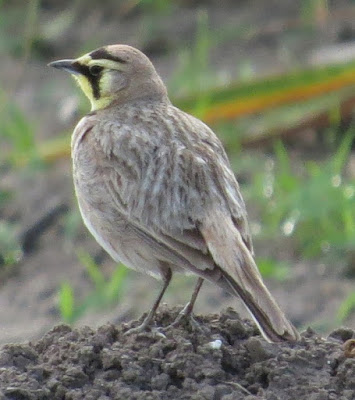 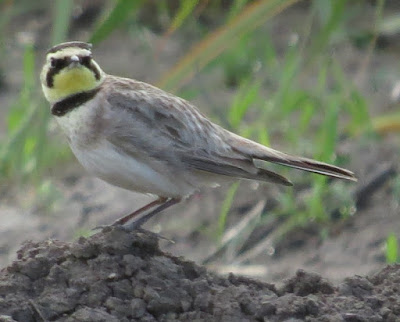 Heading south on Weaver we got great looks at the plovers, but other shorebirds were sparse.  Kaas actually thought he had a pipit next to a lark, but the “pipit” morphed into a Savannah Sparrow before multiplying into several in the field and in the sunflowers along the road!  The flock also held a surprise:  a nice Grasshopper Sparrow!  A “gray-capped” sparrow in a sunflower plant right next to the car turned into a brilliant Dickcissel, a life bird for all!  A distant Upland Sandpiper by the side of the road was a nice addition, and a little further down we finally saw a couple of shorebirds down in the grass that turned out to be Pectorals, and a little scanning landed on a suspicious-looking peep that we finally narrowed down to White-rumped, due to the attenuated look, black legs, strongly streaked breast and sides, and straight bill (was too far away to see the diagnostic rusty spot at the base of the lower mandible).  Several Leasts were in there as well.  The party was broken up by a Peregrine dashing through! 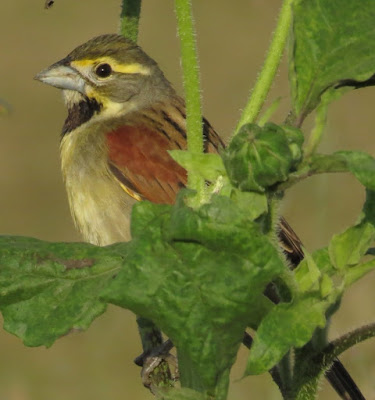 From there we headed over to Rangerville Resaca, stopping at the little bridge to enjoy both Cliff and Cave Swallows, plus a surprise Ani!  An even bigger surprise was driving up to a totally dry resaca!!  I had never seen it bone dry in my ten years here!!  So we tootled over to the resaca within the Ebony Unit of the Las Palomas WMA, and while we found no Ruddy Ducks, we padded the day list with Gadwall, Least Grebes, Coots, Stilts, and Blue-winged Teal in the lake, and in the woods added (by ear) Yellow-billed Cuckoo, Chachalacas, and White-tipped Dove.  A Swainson’s Hawk circled around in the fields, and we actually found another Peregrine!


We were kind of flying by the seat of our pants after that, as we had several options but couldn’t do “everything”, so my charges had to prioritize:  trip birds or life birds?  They opted for the latter, but first we agreed to try for the Aplomado Falcon along Boca Chica Boulevard.  Taking the toll road down, we came up on a resaca just before the terminus, and I wondered if this was the resaca someone had reported a Redhead on recently, so I careened over and we scanned, and sure enough, there were two beat-up female Redheads out there!  A nice surprise lifer for the group! 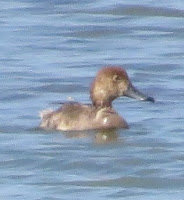 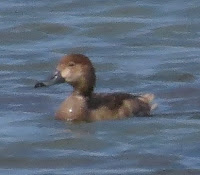 Continuing on to Boca Chica, we went far enough to bag a heat-wave-induced view of the Aplomado Falcon (although he gave us a good flight look).  We also got good “listens” of Bobwhites, but alas, none showed themselves.  I think the Border Patrol guys had a good time making my charges sweat as they went over their passports!


The Tamaulipas Crow hadn’t been reported recently, but that didn’t mean he wasn’t there, so with the promise of great photo ops of Caracara and Chihuahuan Ravens at least (to say nothing of the gulls), we headed over there, and I was shocked at the number of trucks, large and small, going in there!  We pulled over once up the hill and still almost got run over by a garbage truck coming into our little corner, but we did have great looks at the ravens, and a first-year Herring Gull was new for the trip!  About that time a report came over the RBA messaging system that a possible juvenile Great Black Hawk was sighted at Sheepshead, which if confirmed would be a first U.S. record!  So that and the heavy traffic finally drove us away, but the gang opted to hit Old Port Isabel Road (OPIR) first to bag a few lifers (actually, I think they had all seen a Great Black Hawk on previous tropical trips, so that wasn’t a big priority)!


Surprisingly, no falcon was manning the nesting platform, so I was very glad we at least got a passable look on Boca Chica!  A Cassin’s Sparrow popped up and gave great views (and pictures for those on the correct side of the car J), but the Bewick’s Wren wasn’t as cooperative…  At one stop in the thornscrub a Curve-billed Thrasher pair darted by; the only one who actually saw it was Kaas, but it wasn’t an identifiable look.  Thankfully, everyone got the Verdin that popped up, but only Kaas got the Gull-billed Tern that batted by behind us…  Some Long-billed Curlews circled around and landed, and the very nice driver of the car coming the opposite direction actually stopped for us until everyone had gotten their fill! 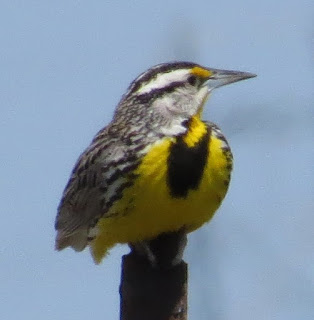 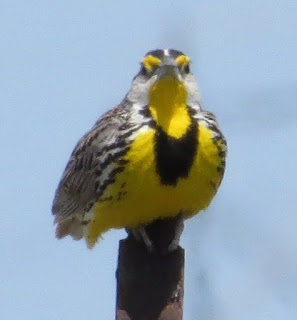 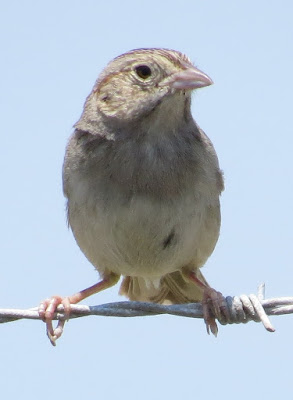 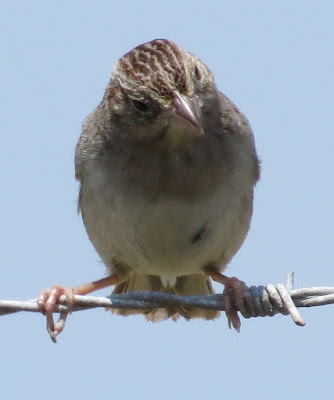 Finished up OPIR and blasted over to Sheepshead, where Lizee Cavazos had gotten some great photos of the bird as it was being mercilessly harassed by grackles, and it sure looked good!  (It had initially been ID’d as the more expected but still rare Common Black Hawk, but warning bells went out throughout the thread not to rule out Great Black, and indeed, the bird looked way too large and “long” for a Common Black…)  The migrant show was definitely slower:  the orioles, Parula, and waterthrush were still around, but a nice male Rose-breasted Grosbeak and both Indigo and Painted Buntings were nice, plus a Yellow-breasted Chat that Alicia Cavazos (no relation to Lizee J) showed us!  The whole Harlingen contingent of the Birder Patrol gang was there (plus a whole bunch of other folks who had heard the news), so when Sue Griffin got a report of a Blackpoll Warbler over at the CC, we all loaded up and headed out!

As per usual, we first spent a little time at the water feature where Catbirds, Orange-crowned, and Hooded Warblers showed up.  As we wandered to the “back yard”, Alicia and Anne Mayfield told us of a Bay-breasted Warbler that was hanging around the “Oriole Oranges”, along with the continuing female Cape May!  We eventually got on the Bay-breasted, but in the meantime they had a vireo that they wanted an opinion of, and when I finally could get on the thing it turned out to be a Warbling!  Mary Gustafson and Bill Clark showed up about then, and he confirmed from the photos that the Sheephead hawk was indeed an immature Great Black!  The mystery flycatcher that everyone had been debating about showed up again, so we all wanted her input, and like a good teacher she asked, “What is everyone calling it?”  That got us all to carefully look at and analyze the bird; the fact that it wasn’t acting like an empid (i.e., flipping its tail) but more like a pewee bothered me, but the overall color and wingbars looked too bright for a pewee to me.  When she hinted that it was definitely an empid, I said Acadian straight away, as the thing had a crazy long primary projection, even though the back didn’t look as green as I would have liked!  She concurred, so we felt better! 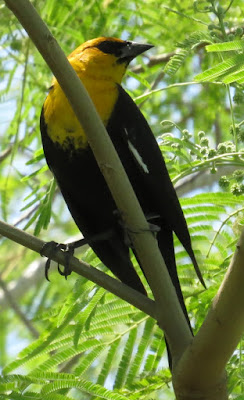 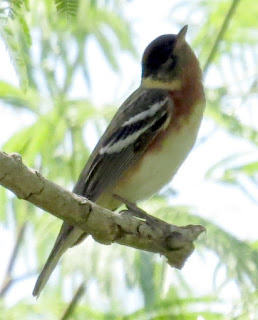 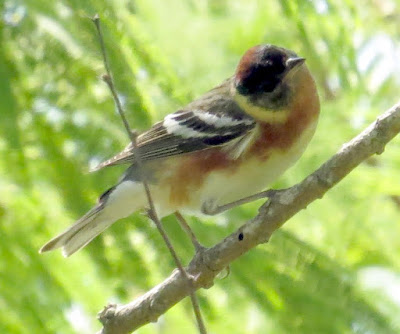 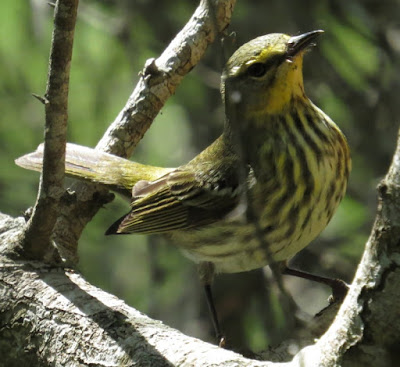 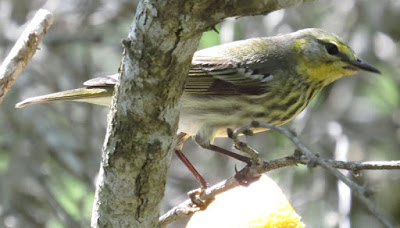 A report that the Black-throated Blue Warbler was back on the boardwalk sent us out there, but not before getting waylaid by shorebirds in East Pond…  Dipped on the Blue, but got an American Redstart and Black-throated Green instead; otherwise it was pretty quiet.  We had to leave after that, so I took the scenic route down SR 48 where the gang saw an Oystercatcher on the fly!  With that we ended up with 113 species for the day! 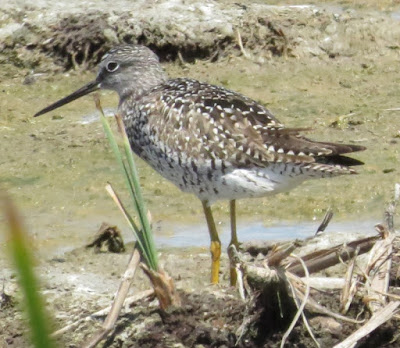 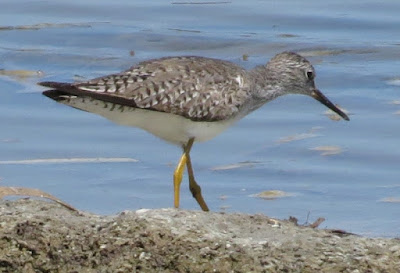 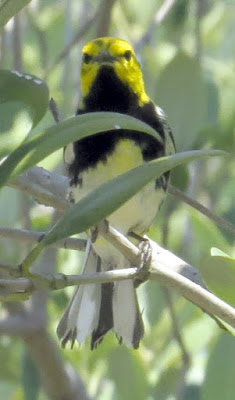 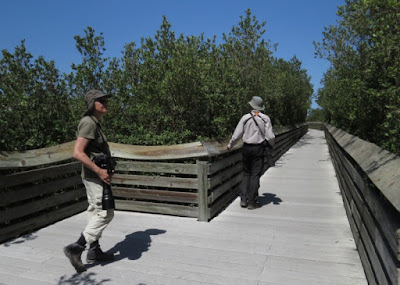 Suus and Kaas comb the boardwalk for migrants...