Boy, what an adventure!  I talked everyone into letting me switch itineraries with Juan Sebatian, who was scheduled to take the gang out the next day to Brushline Road, as it promised to be a Big Show on the Island the next day with the storm front moving through tonight!  And when I showed the group the list of potential lifers on the Brushline route (not to mention new possibilities just for the trip), they were excited!


It was a beautiful day for photography, and on the way up we passed a lovely Swainson’s Hawk on a pole that we swung around to take pictures of!  At South Brushline, again we didn’t get very far before a pair of Pyrrhuloxias performed famously, with the female collecting nesting material!  The Brown-crested Flycatcher showed later, along with lots of cooperative Lark Sparrows, and Suus even spotted a Cassin’s Sparrow on a post!  Both flavors of cowbirds gave great looks (and listens), and we did see a pair of Bobwhite on the road, but they were waay down there! 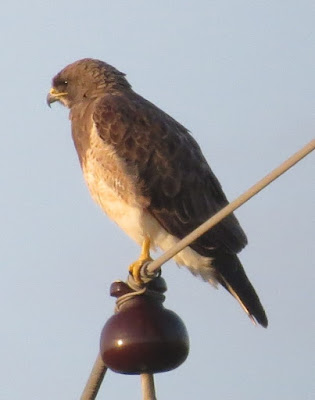 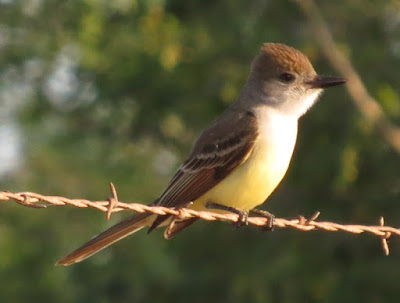 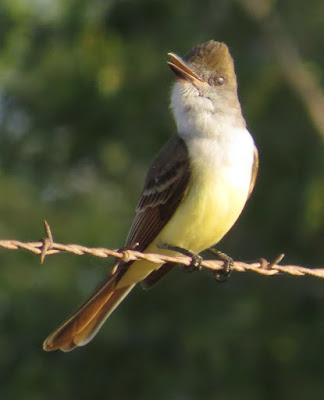 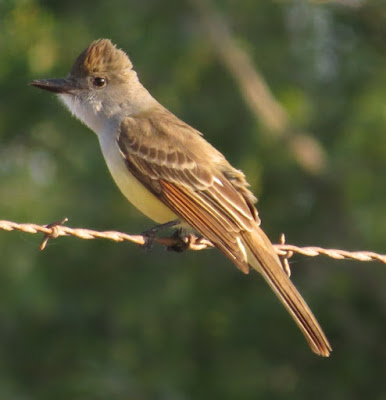 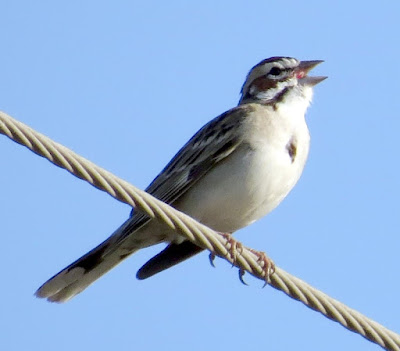 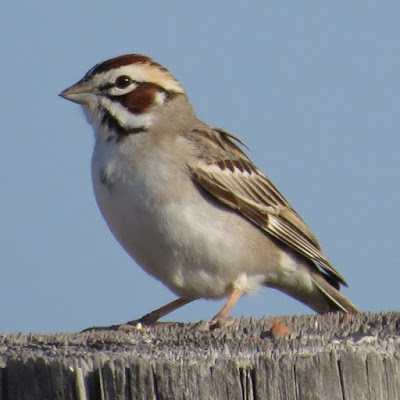 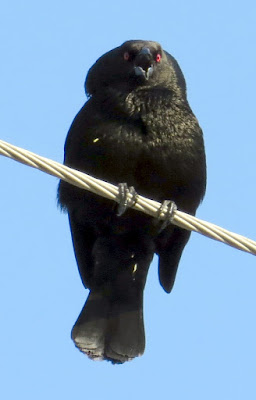 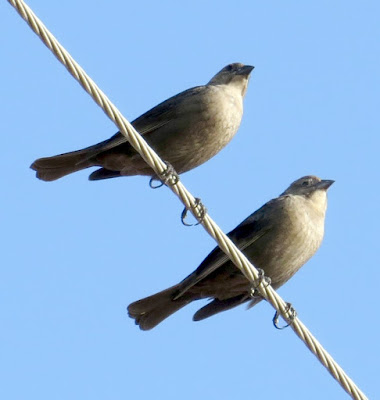 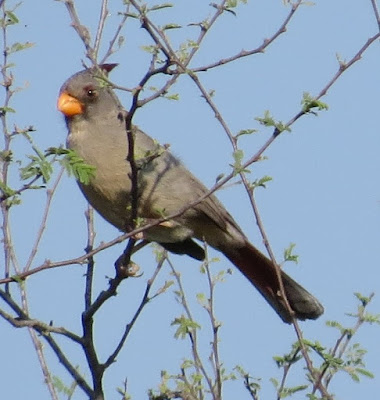 Lady Pyrrhuloxia with a rather stern look...

Crossing the highway got us more into the thornscrub, with Caracaras, Harris’ Hawks, and Black and Turkey Vultures batting around (we chuckled at the Swainson’s Hawk and Black Vulture that seemed to be hanging out together…J).  Bullock’s Orioles gave fleeting views, but the mammalian highlight was a huge Nilgai in the brush! 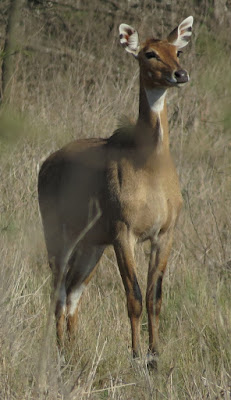 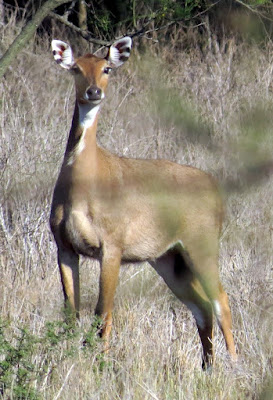 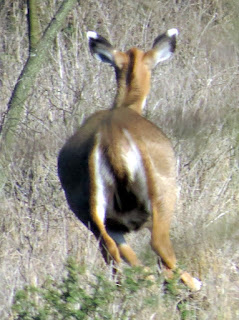 A little fuzzy, but you can see the tell-tale white ear tips

When we got to the trailhead to La Sal del Rey, we headed in with singing Painted Buntings and Bewick’s Wrens in stereo!  Kaas spotted a Rekirt's Blue, and another target, the Wild Turkeys, gobbled from the brush but wouldn’t allow a view.  Up at the cactus patch, the Cactus Wren made us work for him, but he ultimately gave great views (just not on a cactus J), along with a Bewick’s Wren that sang and scolded.  Common Ground Doves sang from the scrub (we eventually saw a couple dart across the road), but the targets here were the Snowy Plovers, and we finally found Mama with two adorable fluffy babies along the shore! 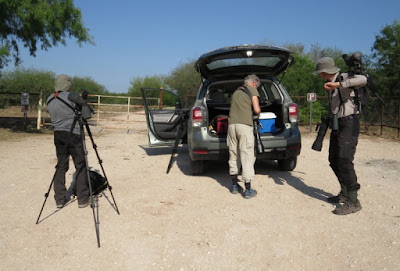 The gang gets ready to hike out to the salt lake! 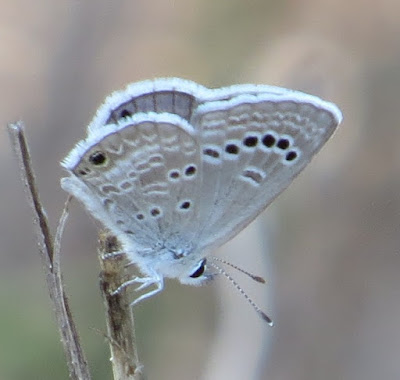 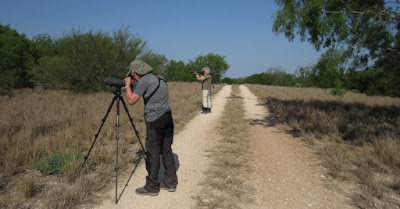 Wim enjoys a Verdin (I think it was) through his scope, while Suus tries to get a shot! 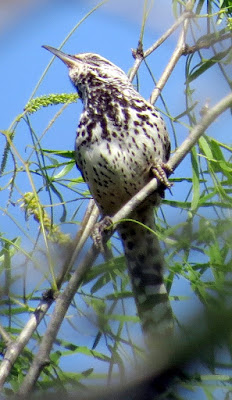 As we continued road-birding, a Curve-billed Thrasher sat on a wire next to his cousin a Mockingbird for good comparative views!  On the way to the farm pond I was pleased as punch to hear a Black-throated Sparrow singing, who eventually gave everyone great looks!  Even the pond was productive, with their life Baird’s Sandpiper looking like a huge bully next to the Least Sandpipers, and a Stilt Sandpiper coming into breeding plumage delighted the group!  I heard a Hooded Oriole as I was turning the car around, but that turned out to be the only one of the route…  On the way out Kaas spotted the Bobwhites off the road wherein everyone jumped out to look – great looks, but the birds were too quick for photos!

This Curve-billed Thrasher (left) and Northern Mockingbird couldn't have planned a better pose for comparative views! 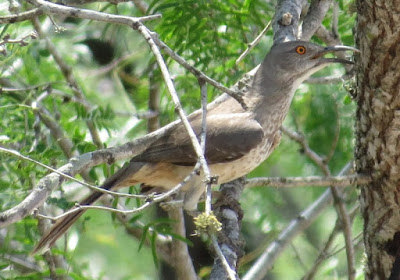 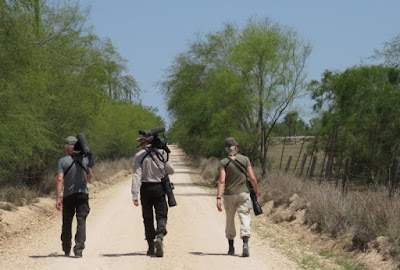 Heading up to check out the pond...

Heading back down, I was about to turn onto Ken Baker when I noticed a shape in the ditch ahead of us, and it was the coveted Roadrunner!  Everyone got “proof shots”, after which we snuck up a little, and he crept into the vegetation, but as I pulled up where I thought he had gone and prepared to “mess” with him, there he was, right on the berm!  What looks!  (And after he crept away again he refused to be messed with… J)


Down Ken Baker we went, with lots of Scissor-tailed Flycatchers, but no White-tailed Hawk this time… L  It was getting pretty quiet by then, but heading up Jesus Maria Suus spotted a large body crossing the road, and it was the Turkey!  Everyone got brief looks, but at least they were looks!  Kaas spotted a Red-tailed Hawk which took off and gave everyone repeated great looks as he circled around, and at the little hidden wetland in the “residential” area at the end of the road, Kaas also spotted a Northern Waterthrush!  There was also a Green Jay that showed briefly in someone’s yard; Kaas jokingly suggested I jump the fence and scare it their way…


We picked up the pace going back, and as we were discussing options on Ken Baker Road, we spotted something crossing it, so I slowed down to look and POW!  The back tire blew!  I assumed it was the previous patch job that had just weakened, but when Keith came to rescue my charges, he took a look and found the real culprit:  a huge bolt that none of us had seen!  The AAA guy from Harlingen showed up about then to put the donut on for me (and also showed me where the thing had punched a quarter-inch hole in the rim itself L), so Keith took over (since he was taking them to dinner and a night walk anyway J) while I limped home on the donut…  (Had I been on the ball I should have taken a picture of the offending item, which my friend Sue said probably fell off a tractor...)