Susan’s second target was the White-collared Seedeater, so we made plans to be up at Salineño at dawn, but I sure didn’t see the tremendous lightning storm we witnessed on the way there in the forecast!  No doubt that a front came through, as it was warm when we left and definitely cool when we stopped at the Stripes in Roma!  We did drive through some rain, but thankfully it was over by the time we got to Salineño.  Along the dirt road an Altamira Oriole showed off on the left, but then we noticed a pair of Hooded Orioles in the tree next to us!  An Olive Sparrow jumped right up on the wire fence and sang for us, which was a special treat!


Another person was already there (a photographer who looked like he may have been from India), and he had his sights on a big bird across the way and asked us what it might be.  I was anticipating Red-billed Pigeons, but our “pigeon” turned out to be a Chachalaca once in the scope!  However, several large pigeon-like birds flew overhead so fast that I couldn’t get on them, but Susan got enough of a look to confirm that there was no white on the tail tip, so I felt comfortable adding Red-billed Pigeon to the list!


We headed up the trail with lots of things singing, including what may have been the same brilliant red Cardinal we had the last time I was up here!  We pretty much headed straight to the end, but we did stop for a singing Summer Tanager and a brilliant Bullock’s Oriole!  We set up shop once at the cul-de-sac, as Susan was willing to give it as long as it took for the seedeater to show up!  In the meantime we did have some interesting birds:  five Black-crowned Night Herons and a single White-faced Ibis were in a tree across the river, egrets and a Tricolored Heron rowed by, and a small flock of Blue-winged Teal went whizzing up the river.  We heard quacking, and two “Mexican” Ducks went dashing the other direction, showing their white-bordered speculums quite nicely.  And just to relieve any doubt, several Red-billed Pigeons flew by at eye level for beautiful views! 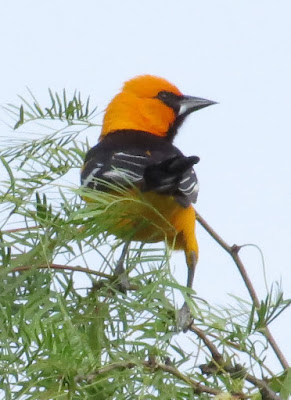 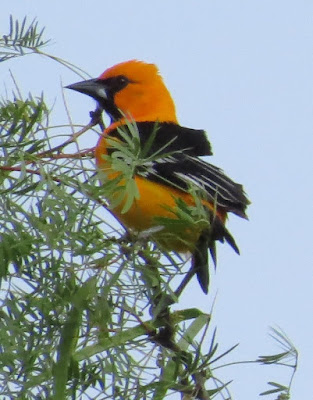 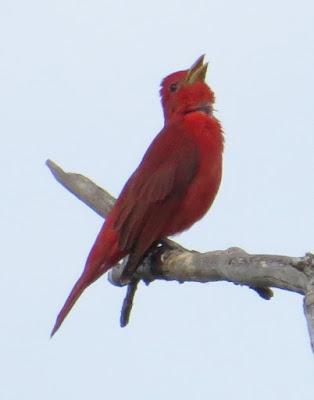 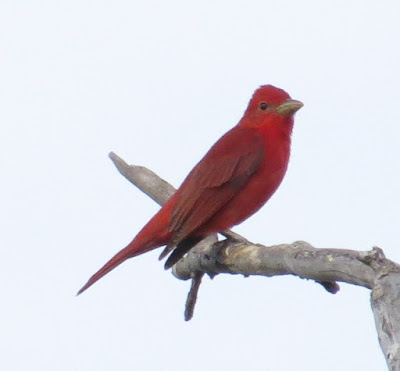 It shortly started to drip after that, so since the radar showed a big green blob next to us (and the animation wasn’t loading to help me determine which direction it was going), I made a command decision to retreat to the car and come back later, after the rain threat had abated.  So we headed out, passing another guy with a Big Gun who was heading to the Seedeater Spot, and decided to bird the Dump Road, picking up a pair of Common Ground Doves on the way out.  Since Susan and Terry had been to southeast Arizona before, they weren’t worried about trying to draw out every Cactus Wren and Verdin we heard, but the star of the show was a Scaled Quail that was calling right next to us!  A little coaxing brought him right out in the open (and I unfortunately didn’t have my camera ready…L)!  That was a great look!


The sun came out while on the road, so we decided to scoot back to Salineño and try for the seedeater again.  I quipped, “I hope that guy we passed doesn’t say, ‘You shoulda been here five minutes ago!’”  Down at the boat ramp the Gray Hawk called behind us, and as we headed in, we passed said guy plus the Indian guy, and when I asked, “Any success?” he answered, “It depends on what you mean by ‘success’!” and then told us that the only look they had was of two birds darting down the river!  That didn’t bode well, but we decided to give it a go anyway, and spent about two hours there, enjoying more tanagers, orioles (the Audubon’s sang but wasn’t visible), and even more Red-billed Pigeons!  At least nine Caspian Terns sailed by, followed by a single Forster’s; even a Cattle Egret pumped by at one point!  One Black Vulture joined the Turkey Vultures, but the only other raptors to come by were a pair of Sharp-shinned Hawks.  The Red-winged Blackbirds were making those maddening teu calls that sound just like the seedeater, but finally the little bugger sang his sweety-sweety-sweety-teuteu song, but from way upriver, just like last time… L  Susan reached a point where she felt she was crossing the line from dedicated to obsessed J, so she agreed to call it quits and head to Falcon State Park where Terry could get some butterflying in! 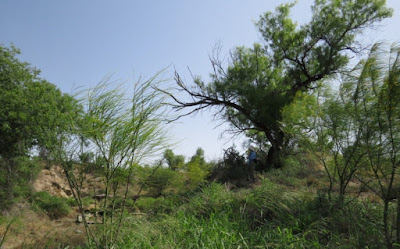 Susan hopes beyond hope for a seedeater... 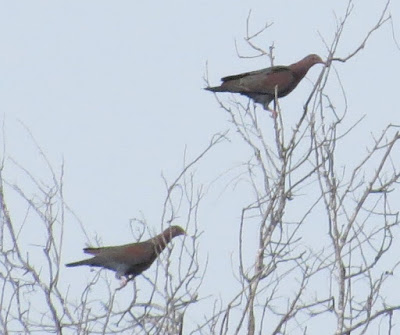 We get Red-billed Pigeons instead!


After checking in we headed straight for the garden, where Susan finished her lunch in the shade and Terry and I made the rounds, but not before adding a Curve-billed Thrasher to the list!  Even though it was sunny, the wind was horrendous, so the gardens weren’t terribly active.  But we did log several Elada Checkerspots, Lyside Sulphurs, a couple of Texan Crescents, a Southern Dogface, a Large Orange Sulphur, and a Reakirt’s Blue.  We finally happened on a life butter for him: a rather beat-up Turk’s Cap White Skipper! 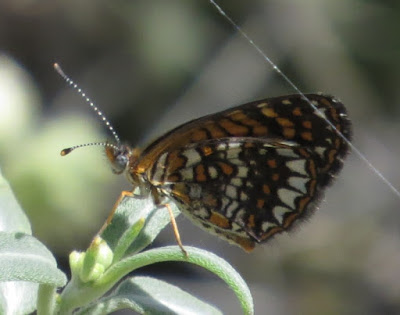 Elada Checkerspot (ventral above, dorsal below) 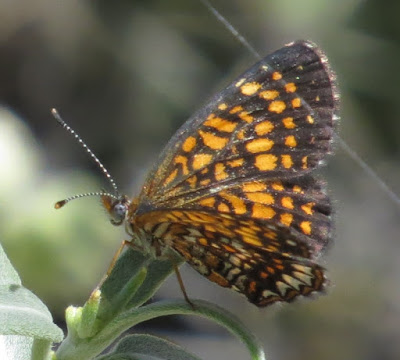 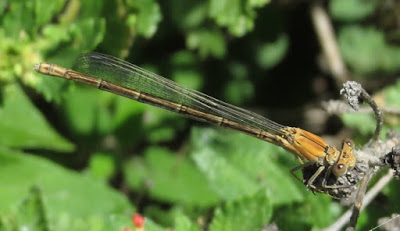 Susan wanted to walk, so not wanting her to get turned around on those trails, I went with her while Terry continued to “lep”, and we had nice looks at a pair of Pyrrhuloxias that we suspect had a nest.  A Roadrunner popped up at the trailhead parking lot but literally “ran away,” and on the way back we had glimpses of a Green Jay and a Verdin.  Back at the car, Terry had added Pipevine Swallowtail and Gulf Fritillary to his list, so since it was getting rather warm we spent the rest of our time there slowly cruising the roads; we had several Scissor-tailed Flycatchers (I had seen a Western Kingbird before going to find Susan), and at one point a pair of Lark Sparrows started the process of making a family! J  Susan and I got on a female Bullock’s Oriole, but Terry kept insisting that it looked red!  We finally figured out that he was looking at a different bird, a brilliant male Vermilion Flycatcher!  Susan agreed that was the perfect icing to the day! 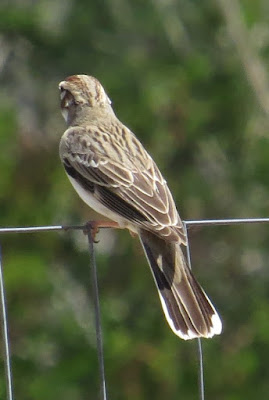 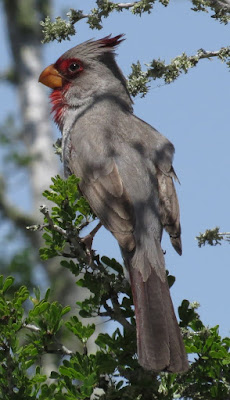 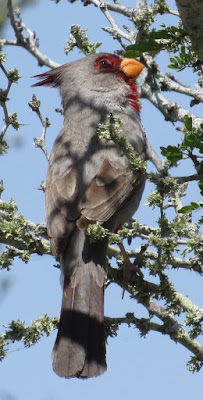 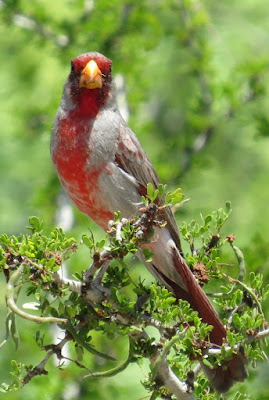 Why some of our British friends call them the "Half-painted Cardinal"!

Somewhere in here my phone kept dinging with reports of migrants from South Padre, and the “last straw” for Susan was a report of a male Cerulean Warbler at the Convention Centre!  Hindsight is always 20/20:  I was kicking myself for not sticking around the seedeater spot despite the dripping, and Susan was kicking herself wondering if, with the front, she should have sacrificed a possible seedeater for more migrants!  Oh, well; you make the best decisions you can at the moment, and live with the results (although they were discussing making an Island run the minute we got home…)!


We headed to Alamo after that, adding a Chihuahuan Raven on the way, which made it a surprising 73 species for the day; that’s not bad for Starr County!  (And an update:  they did end up making an Island run, and got all the reported warblers, including the Cerulean! J)   Bird List: