Cathey from Austin was a laid-back birder (and butterflier) who just enjoyed reveling in whatever she could see, but for this outing she was particularly interested in seeing Sandhill Cranes, as she had come down once before to La Sal del Rey and missed them.  So thanks to Bird’s Eye (a handy little app that ties in with eBird data), I saw where the cranes had been seen three days ago in the Hargill area, so that would be the first stop, with plans to work our way to the La Sal area afterwards.


We got to Hargill Playa right around sunrise, enjoying a couple of Northern Harriers and a Cooper’s Hawk (first of many) coming up Lincoln.  We made the turn onto 1st, avoiding the deep ruts (thankfully it was dry), and since looking into the playa itself was useless due to the high grass, we parked at the gate and scanned the nearby fields for cranes.  Although cold (around 47 degrees), the sky was absolutely blue, and the wind hadn’t picked up yet – just a gorgeous morning!  Tons of blackbirds and grackles were about, along with Barn Swallows swooping through, and at one point a flock of White-faced Ibis powered by in the distance.  But shortly we heard the tell-tale roll of the cranes, but both of us were having trouble trying to pinpoint where it was coming from – from the east or from the west!  Finally we looked up, and there they were, right overhead!  What a show! 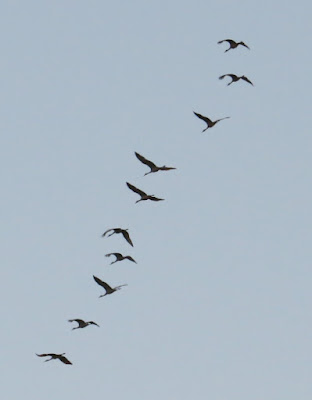 Happy Cathey next to "Heppy" after finally seeing her cranes!

Having gotten our target bird right off the bat, I asked her if there was anything else she’d like to see; Roseate Spoonbills would be nice, and checking Bird’s Eye again, wouldn’t you know that they had been seen in the area as well!  We hadn’t seen much in the actual playa except egrets and unidentifiable ducks, but since cranes had also been reported along Bucy Road (would be nice to see some standing), we headed that direction, taking an unmarked east/west road (that, according to Google Maps, is also confusingly called Bucy Road), and we hadn’t gone far before we spotted a flock of geese flying ahead of us!  We jumped out and found one White-fronted leading the crowd, followed by several Snows, and even better, a couple of noticeably smaller Ross’ Geese!  They seemed to be stalled overhead as they battled the north wind, then suddenly made a right turn and the whole bunch headed east right overhead!  Just before we came to the intersection with the “real” Bucy Road, another string of waders flew by in the distance that turned out to be the coveted spoonbills!  Unfortunately Cathey couldn’t get on them before they had blended into the distant sky… 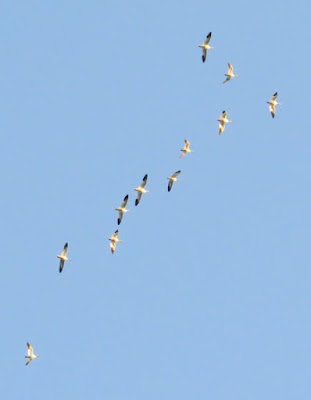 Things were anticlimactic after that; my friend Huck had seen Lark Buntings in the area, but with the wind picking up the little birds just didn’t want to come out and be seen.  Scissor-tailed Flycatchers were more resilient, however, and enjoyed perching on the wires, and we got some nice views of White-tailed Kites, including one bird that was hovering and then dropped with his wings held in a “V”!  Trying to avoid running over the big barking dogs at the end of the street (and since the spoonbills were headed east), I suggested running over to Delta Lake County Park, as spoonbills had also been reported there, and it would be a convenient (and only) place to use the restrooms… 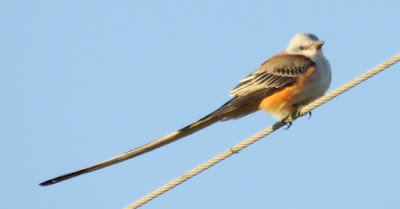 What a difference from the last time I was here when they were having some kind of youth fun run!  The place was packed then, and today it was absolutely empty, which surprised me on a Saturday!  (Cathey thought the weather scared most of them away… J)  After spotting a flock of White Ibis flying directly overhead, we pulled in the parking area next to FM 88 where a father and son were fishing, so we chatted a bit, but Cathey soon announced that she had a tree that was just full of Monarchs!  Knowing that Queens were the abundant “monarch-like” butterfly down here, I assumed that’s what she meant, but I ended up eating crow (or butterfly J) when I saw she was absolutely right:  the trees were indeed lined with roosting Monarchs!  Neither of us knew what type of trees they were (somewhere someone had told her that when in doubt, it’s probably an acacia, but she had her doubts about these…), but not only did they house several Monarchs, but also a couple pairs of bona fide Queens, and the real surprise:  a little Dusky-blue Groundstreak!  She also taught me something I didn’t know (and answered a question a friend in Harrisburg, who virtually raises Monarchs in her yard, asked):  yes, they do migrate through, and yes, they breed here, but they breed while they’re migrating!  That’s one way to spread around your progeny! 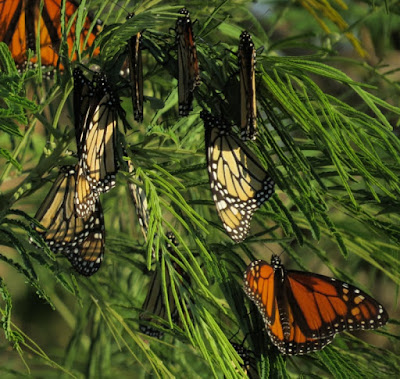 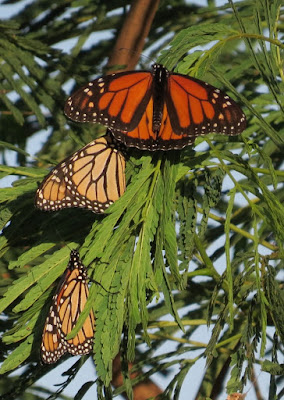 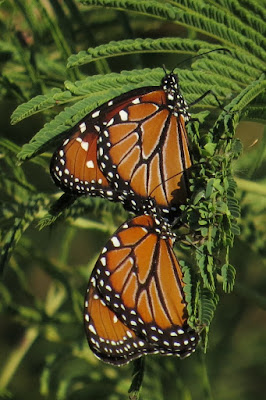 The similar Queen, which is our default "abundant" monarch-like butter 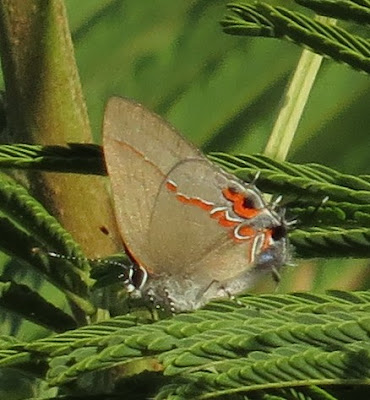 
As I suspected, the lake was way too high for any birds (except some egrets way across the way), but we headed on in to the park, took care of things, and checked out the canals and back area as Kiskadee and Vermilion Flycatcher were additional targets.  Heard the former but dipped totally on the latter (again, way too windy), but did manage great looks at a Black-bellied Whistling Duck with a flaming red bill, a couple of Great Blue Herons, a fly-by Red-shouldered Hawk, and several cooperative Killdeer.  While driving through the “back area” I heard the distinctive cheer! of a Pine Siskin flying over – not too surprising in the wake of this cold front!  On the way out we had a distant flock of Neotropic Cormorants, and the biggest surprise:  an Osprey sitting in the field! 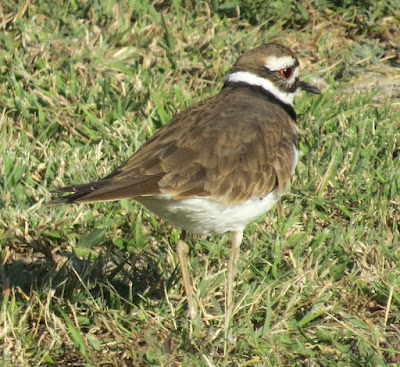 Since the places she was planning on visiting in the afternoon and the next day possibly had better potential for spoonbills, we decided to continue on to the La Sal Route in hopes of getting more looks at cranes (and there was still the remote possibility of a spoonbill at the pond at the end of Brushline Road).  Right away on Rio Beef Road we saw several Turkey Vultures and Caracaras working on what looked like the remains of a feral hog, and we again heard a Kiskadee, but he just didn’t want to come out; instead we got several House Wrens, a Mockingbird, some Lincoln’s Sparrows, and a Verdin mad at us (although the latter didn’t wanna show, either… L).  A little further down the road a Bewick’s Wren was singing, and with a little coaxing he did come out and put on a great show!  (A Ladder-backed Woodpecker and another Verdin were content to just call…)  More Scissor-tailed Flycatchers lined the fence along Ken Baker Road, and the shrikes refused to turn around and give us breast looks lest their feathers get ruffled by the north wind!  Cathey, who is an electrical engineer, explained to me what they were probably doing with the new power lines along Ken Baker (which they had been installing the last time I had gone down that road)!

This Scissor-tailed Flycatcher is showing a little of his red "wingpit"! 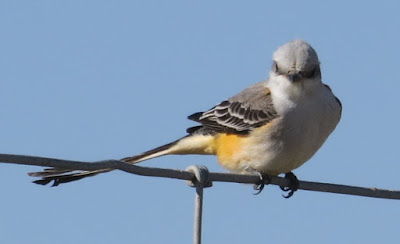 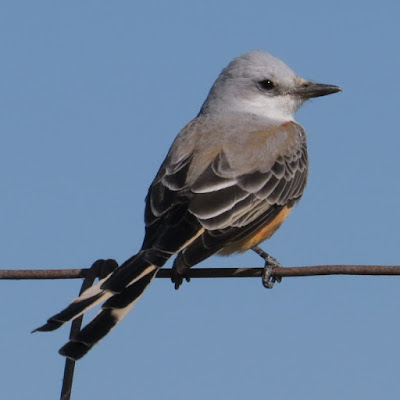 Meanwhile, a closer bird poses on the sunny side of the car!


Birds were truly sparse heading up Brushline; we managed a Lark Sparrow on a wire, but we couldn’t even kick up any White-tailed Hawks (although we did spot a couple of Harris’)!  The pond had some Mottled Ducks, a couple of Greater Yellowlegs, and a whole mob of Least Sandpipers, but that was about it, so we blasted back to SR 186 seeing as we had to get home by noon.  On the way home we talked about parrots, and how you really have to go to a roost or staging area to guarantee them; otherwise it’s pot luck.  But upon getting home, the show wasn’t over; we had just hugged goodbye and I was getting into the car when a huge mob of Green Parakeets came out and started whirling around the trees just a block south of us!  Cathey was thrilled; I left her to wander down and enjoy the show while I headed home; we ended up with a modest 55 for the morning.