Sometimes it’s a good idea to bird the less-popular areas around the county, as you never know what may know up.  Today I wanted to check out the Delta Lake and Hargill areas, as there are a few out-of-the-way eBird hotspots that I wanted to explore (most of these “discovered” by our intrepid Dan Jones).  In hindsight I probably should have gone to Hargill first (more on that later), but Nittler Road was closer, and I arrived there right around sunrise, so decided to start there.  This spot was introduced to me by my friend Pat Heirs, as after a particularly wet season the road was entirely blocked by a lake, that was nonetheless full of birds (on one visit the place was full of Black-crowned Night Herons)!  On subsequent visits the “lake” fluctuated, and today it was totally gone, but I still felt the road was worthy of being surveyed on a regular basis, as it does have a few wet spots along the length of it, and good things can still show up in the ag fields.  Today the best bird of the trip showed up about a tenth of a mile from the intersection with FM 493: an Upland Sandpiper (at the tail end of their migration season here) went shooting by at eye level and landed in the field!  Further down the road a flock of Pectoral Sandpipers flew past and landed in another wet field, and a Long-billed Thrasher scolded from some vegetation along a canal.  Dickcissels seemed to be constantly flying overhead, and this was the only spot I picked up Black-bellied Whistling Ducks. 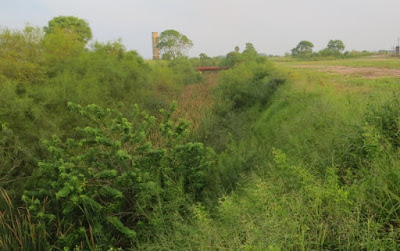 Lush habitat at a culvert along Nittler Road

At the end of the road I headed south on FM 88 (Nittler theoretically continues on to FM 1015 but it looked pretty dicey), made a left on FM 1422, then another left on FM 1015.  This whole area can be good for Sandhill Cranes and geese in late fall and winter, and if there’s water in the ag fields on 1015, they can be stuffed with shorebirds!  Today it was pretty quiet (too early for the big boys, anyway), so I continued to the main destination, a little spot known locally as “1015 Pond,” which, as the grackle flies, is directly east of Delta Lake.  This place can be jumping as well (when it isn’t bone dry; thankfully it wasn’t today), and this morning had a good selection of shorebirds including a couple of Greater Yellowlegs, Semipalmated Sandpipers (as best I could tell, anyway), several Killdeer behaving strangely, and even a Wilson’s Phalarope!  A nice surprise was hearing a metallic pink and then seeing a male Blue Grosbeak bounce up and away!

From there continued north on FM 1015 (those limiting their birding to Hidalgo County have to close their eyes, as you have to invade Willacy County to get to the next stop), left on FM 490, and then left again on FM 88 to Delta Lake Park.  Before entering the park it’s good to check the lake from the parking area on the right, but this time there wasn’t much except for Black and Turkey Vultures circling overhead, as it was still pretty full.  Looking forward to checking the trees in the park after the “pop up” storms of the last week, my hopes were dashed when I saw a lineup of cars, and then discovered they were having some kind of a youth race there!  (Great for the kids – not so great for birding… L)  Frankly, I was surprised they didn’t close the whole park except for those involved in the event, as the kids really needed all the roads (including that nice back area) to run their race, but as soon as the last kid left said back area, the sheriff let me in, and I actually had the whole place to myself except for this ancient vehicle that came bouncing down the fence line, over the canal (somehow), and gave up coming over to where I was due to all the police tape that was blocking parts of the road!  And there was no bird life to speak of, either, so I crawled back out with not much to show for it until an Anhinga soared overhead!


So I headed back up 88 and over to 490 to check out a couple of Dan’s “hot spots”; unfortunately I totally missed the eastern CR 2500 Pond and visited the western CR 2500 pond instead, which was dry as a bone but looked like it had great potential.  So from there I headed down to County Line Road, as another hotspot focuses on a rather large pond north of the road that I didn’t even know was there!  Turning onto the road a Cooper’s Hawk made off with breakfast as a Caracara flew around nearby.  I was very surprised to hear a White-tipped Dove singing in this mostly-agricultural landscape, but I guess there was just enough thornscrub habitat for his liking!  Just before the Big Pond was a little marsh that, like many other places, was rather quiet but had great potential.  Before getting to the Big Pond a male Vermillion Flycatcher put on a show by sallying out and back from a barbed wire fence!  The pond had some distant shorebirds that were unidentifiable from where I was, but the whole road (which is the same road that goes by Hargill Playa) looked worthy of birding as it was in pretty good shape! 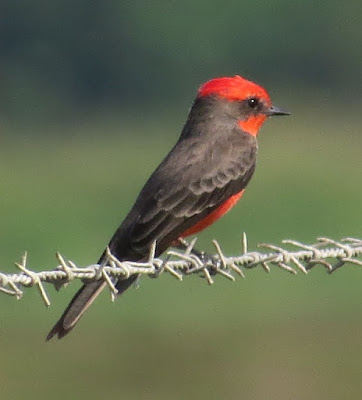 That is, until I got to the Playa! L  Right now the fence line is horribly overgrown, so getting a peek into this highly productive area was tough (this is the spot where the Collared Plover, also found initially by Dan Jones and then Pat Heirs the next year, showed up two years in a row).  Nevertheless, there were plenty of Avocets, peeps, ducks, and Laughing Gulls out there (along with a couple of Caspian Terns), but couldn’t pull out a Snowy Plover (especially as, by that time, the heat waves were intolerable).  Getting back to the road, any sane person wouldn’t have attempted getting past this one section that was pure mud, but it was close enough to the paved main drag that I went for it (having another one of those cocky “This-is-a-Subaru-he-can-do-anything” moments), and was thankful I grew up in Michigan learning to drive in snow!!  After fishtailing a couple of times we came out the other side unscathed with nothing more than an adrenalin rush J, and since I had a little time left, decided to check out south Brushline Road. 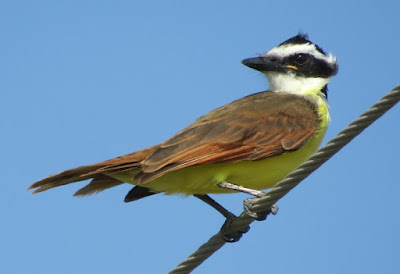 Great Kiskadee (above and below) 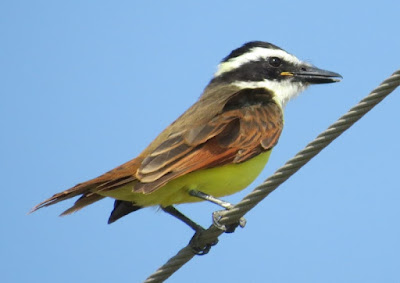 Hargill Playa is on the left (blocked by foliage at this point), and that brown spot down the road was the adventurous part!

This actually was more productive than many of the other spots, with a nice adult Red-tailed Hawk posing just before the turnoff, a family group (I’m assuming) of three sibling White-tailed Hawks, Pyrrhuloxias and Scissor-tailed Flycatchers chattering by the road, and a very cooperative Cassin’s Sparrow that popped right up to pishing!  At one of the “swamps” along the road where I stopped, something big was tromping around in the brush, making a lot of snorting noises, and flushing a bunch of Common Ground Doves in the process!  Whatever it was never showed itself, but I wouldn’t have been surprised if it was a wild hog…  Other “unique” birds along this stretch included Roadrunner, Bobwhite, and Green Jay. 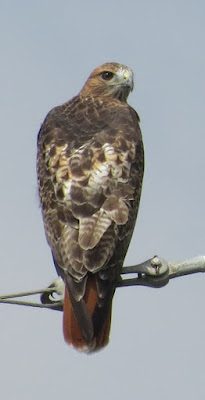 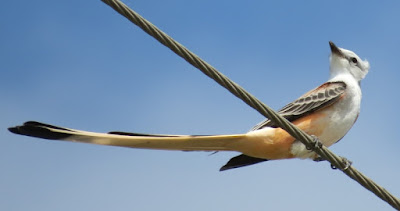 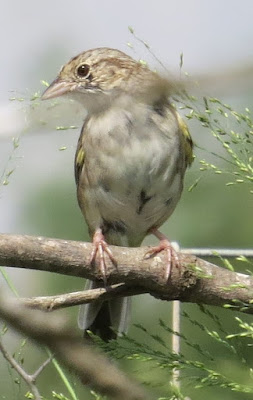 Cassin's Sparrow (an out-of-focus branch in the way accounts for his fuzzy face...) 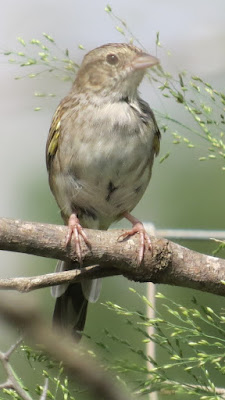 It was time to go home after that, with a modest 67 species for the morning.  Bird List: