Hiking the Back Yard

Clare and Michelle were two birding buddies originally from New York and now living in Florida, but this was their first time to south Texas, and they were particularly interested in seeing Santa Ana NWR in light of the Border Wall controversy.  Just that morning I had received an IM from someone who had heard that Santa Ana was being “torn up”, so I was happy to dispel that piece of misinformation and especially show our guests what a beautiful place it still is!


We actually got there well before sunrise, seeing as it’s only a 15 minute drive max from the Inn, but surprisingly things were rather quiet, with the only calling birds consisting of a distant Carolina Wren, close-up scolding House Wrens, and a querulous Clay-colored Thrush that never came out! L  A darner floated around enticingly and finally hung up on a palm leaf; I was really hoping it was one of our more exotic species, but it turned out to be a female Common Green Darner, probably the most widespread darner in the country!  A couple of Green Jays chattered close to the car, and the girls did get a look, but it was still too dark to really see any color, so we were hoping for a better look later.  After checking in, we headed into the feeder area where I heard another thrush, but we only got glimpses of the thing as it shot back and forth in the trees. 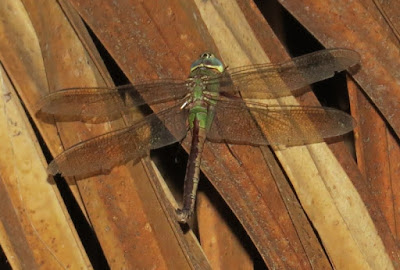 After climbing onto the levee I explained to them that, if a wall is built, this is where it would go, and explained how the levees were built to protect the populated areas from flooding and to divert the Rio Grande if need be (like we had to back in 2010 when Hurricane Alex dumped so much water in Mexico).  Down at the roundabout we headed to our right taking the Willow Lake Trail, aiming to take the whole loop around to the Pintail Lakes Trail and back.  The girls really wanted a good look at a Kiskadee (as they were calling enticingly all over), and one finally posed, along with the many Couch’s Kingbirds!  In a somewhat open area a Verdin showed briefly, but the smacking Lincoln’s Sparrows refused to pop up.  The butterflies were actually more cooperative, and we had great looks at tons of Snouts, White Peacocks, a Great Southern White, and a couple of Giant Swallowtails.  Michelle spotted a roosting Pipevine Swallowtail that was showing off its glorious ventral hindwing spots; miraculously I was able to get the scope on it for dynamite views!  I was able to point out a huge Altamira Oriole nest, but the birds themselves were content to happily whistle in the distance…  As we approached the little footbridge that little bugger of a Beardless Tyrannulet decided to call right overhead, but he hid in a flock of Ruby-crowned Kinglets, frustrating us to no end!  When I finally did get on him, he apparently realized the jig was up and took off! L  We would hear him periodically during the course of the hike, but he never did come out…


Once over on Willow Lakes proper we finally started seeing some birds – nice, cooperative, BIG water birds! J  Black-necked Stilts ruled the day, along with lots of Blue-winged Teal and lesser numbers of Shovelers and Gadwall.  Scoping the stilts we were able to pick out a couple of Lesser Yellowlegs, and a dead tree across the way held several White-winged Doves but also a male Vermilion Flycatcher (which unfortunately didn’t hang around for scope views)!  The Harris’ Hawk pair also posed, and over at the blind we were just heading out to chase down the titmice that were calling when a Least Grebe suddenly trumpeted!  Thankfully the girls were able to get on him before he went hiding in the grass… 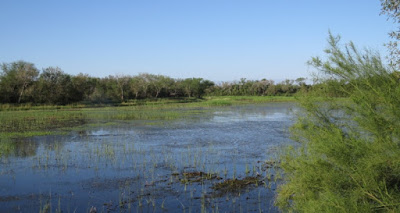 Continuing on, thankfully the titmice came out and gave great views!  Behind them was a female Kestrel on a dead tree, and in another dead tree both a Golden-fronted and Ladder-backed Woodpecker showed for great comparisons!  As we passed the last of the Willow Lakes an Osprey flew around way in the distance!  We passed the canopy walk and the tree tower, then hooked up with the portion of the Pintail Lake Trail that parallels the Rio Grande.  We dutifully enjoyed looking into Mexico on the overlook (no kingfishers), and enjoyed more dragonflies along the trail, in particular a pretty orange one that I initially thought was a Needham’s Skimmer, but once in better light I could see it was a female Red Saddlebags (the intensity of the sunshine on the wings actually washed out the “saddle bags”).  We also had both Eastern and Great Pondhawks, and a big lizard Michelle spotted doing “push-ups” on a trunk turned out to be a Blue Spiny Lizard! 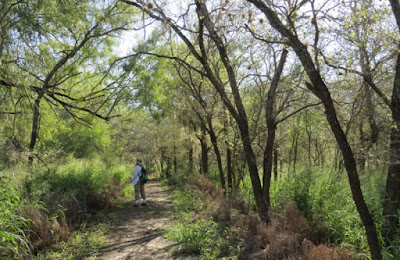 Michelle on the Pintail Lakes Trail 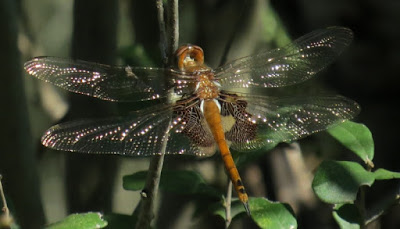 We dumped out on the main trail and headed down to Pintail Lakes, enjoying a colorful Texas Spotted Whiptail running along the trail.  In the lakes were more stilts, but also many Black-bellied Whistling Ducks, Coots, a pair of Pied-billed Grebes, and a few Mottled Ducks in addition to those we had already seen.  A couple of White-faced Ibis fed, and some dowitchers flew by in the distance.  We took a peek at the farthest Pintail Lake and picked up a few Least Sandpipers before heading back towards the Visitor Center.  On the way one of the girls spotted a huge Indigo Snake making haste across one of the dried ponds!  Just before entering the woods a smaller butterfly turned out to be a Bordered Patch.

One of the Pintail Lakes 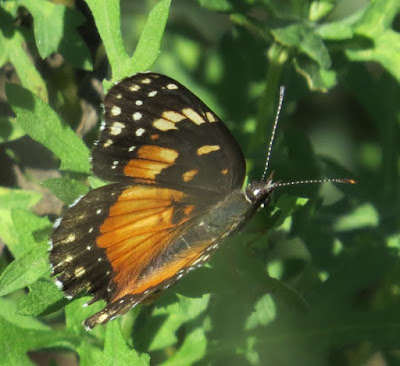 Out on the road we tried unsuccessfully to pish out both a Long-billed Thrasher and some Olive Sparrows that were calling, but the only thing to show itself was a White-patched Skipper that landed on a rock and pretended it was lichen (as Clare observed J)!  We finally gave up and dragged ourselves back to the car, and just as we were putting our gear away, the two Green Jays came back and gave great views!  (The whole hike we were discussing where we could go the next day to see them up close and personal…)  That was a great way to end the morning!

Dragonflies (would have had more had we really been focusing on them):