Father and son team “Andrew” and “Bill” came to the Valley to celebrate Andrew’s 18th birthday, so since this was their first time, most everything was new!  (Andrew was actually the “hard core,” while he encouraged his dad along… J)  They only had two days, so they opted to spend this first day concentrating on trying for the rarities and picking up the common stuff along the way.  So we started at Bentsen in hopes of bagging the White-throated Thrush; the wintering Hooded Oriole gave us a great show, and we were able to get Bill onto his life Black Phoebe at the canal, but of course the Chachalacas at the Nature Center feeder areas stole the show!  We got quick looks at Green Jays and Kiskadees, but were anxious to get to Kiskadee Blind, where we found our spots on the bench and joined a handful of other folks waiting for the thrush to come in.  Before long what sounded like another tour group came in, and it was standing room only!  (I was tempted to write an essay on the Top Ten Comments Overheard in a Crowded Bird Blind, my favorite being one murmured from a man in the back who said, “We’re all nuts!” J)  We enjoyed visits from Altamira Orioles, White-tipped Doves, a perky Lincoln’s Sparrow, Golden-fronted Woodpeckers, and even a Javelina, but a highlight for many (especially a gentleman from Boston) was a cooperative Clay-colored Thrush! 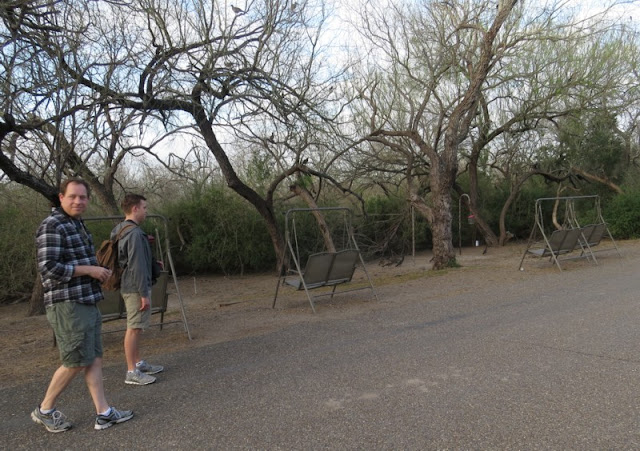 Great way to get your life Chachalaca! 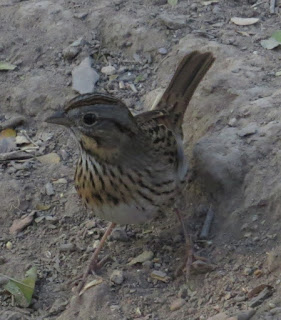 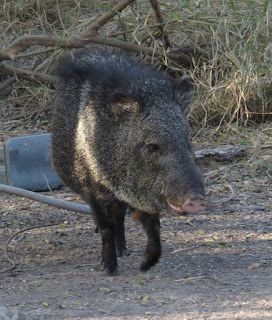 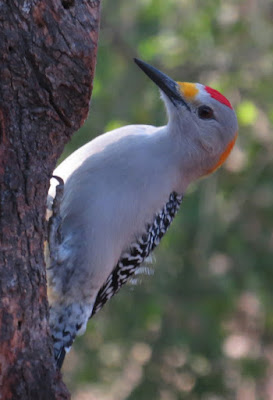 Even in the shadows, the colors on this male Golden-fronted Woodpecker are stunning! 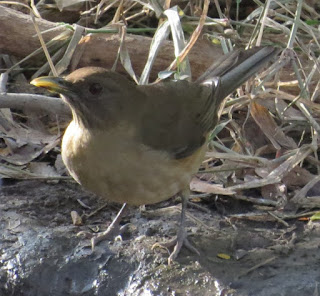 Clay-colored Thrush, a nice consolation prize!
Alas, the Whitethroat never came in while we were there (nor came in all day, from what I heard), so we headed on to Anzalduas.  I took Old Military Highway, where Alec spotted a hawk flying overhead; I jumped out and ID’d it as a Red-shouldered.  But just as we were getting ready to take off, a White-tailed Kite powered by in the field next to us, which was one of their target birds!  One of the young White-tailed Hawks that had been hanging around the area also made an appearance.  We had a number of potential targets at Anzalduas, but unfortunately the only one we were able to bag was the Sprague’s Pipit (which is nothing to sneeze at, but at least it’s pretty reliable).  A kingbird we saw by the entrance kiosk thankfully decided to titter so they could count their life Tropical!  I think their disappointment was assuaged by the great look at one of the wintering Burrowing Owls along the levee!


Anxious to bag the Jacana, we headed over to Santa Ana next, with a quick stop in Hidalgo to add Monk Parakeet to the list (and introduce them to Stripes Tacos J).  We heard from the volunteers that the one over at the far end of Pintail Lakes was the most reliable at the moment, so we loaded up and headed straight out!  People we ran into on the way gave us specific directions on where to look, so when we got there, we kinda spread out a bit to get the best coverage, but in the meantime we bagged Fulvous Whistling Duck and Least Grebe for the list!  While the guys enjoyed them I went to the end of the trail and scanned, and couldn’t believe it:  the jacana was sticking his head up on the far side!  I got the guys over and they were able to get great scope views of the critter before he disappeared totally into the grass, never to be seen again (at least by us)!  We showed some other folks who had just arrived where we had seen the bird, but we headed on back, now taking the time to enjoy the other waterfowl in Pintail Lake, including Redheads and an Eared Grebe (no Pintail, ironically)!


They needed Bronzed Cowbird, so on the way to Estero we swung by the Progresso Silos in hopes of picking one out among the throngs of Redwings, and thankfully Alec spotted a female in a small group right by the car!  After that we blasted up to Estero Llano Grande for the Pauraque and Screech Owl, picking up a Green Kingfisher fleeing down the canal near the little steel bridge.  The Pauraque was easy to see (he never fails to amaze!) but the owl was tucked away into his box, probably because by that time the hot afternoon sun was shining right smack where he usually sits!  We decided to check the overlook for Ringed Kingfishers, but Alec spotted an Anhinga instead, and later realized that that was a life bird, too! J  A vigil at the hummingbird feeders gave great looks at Buff-bellied Hummers, along with young male Black-chinned and Ruby-throated, so it was nice to get the Hummer Trifecta!


A report came over the RBA that a White-throated Thrush was being seen at Casa Santa Ana, and a gentleman we ran into said that the proprietess was welcoming visiting birders, so the guys wanted to try for that with what little time we had left.  Unfortunately the bird never showed (and we were all starting to doze off, I think J), so we decided to call it a day and headed home with 91 species!  Bird List: