Pauraque for a Pennsylvania Couple


We really had to dance around the storm front descending on the Valley, but thankfully the morning was to be rain-free, so I decided to focus on local walking preserves to nail the regular Valley specialties for “Chad and Marge” from Pennsylvania (names changed to protect identity).  I left it up to them:  the original plan was to do Santa Ana NWR, then work our way to Anzalduas by way of Hidalgo and Granjeño, but seeing as the Crimson-collared Grosbeak and Tropical Parula were still being reported at Frontera, I gave them the option to go there and then on to Estero Llano Grande for some other specialties.  Either was fine with them, so we headed to Weslaco, and since we were very early I once again tried cruising the neighborhood listening for parrots.  Got our fill of grackles instead, so headed on to Frontera,  where lo and behold a pair of Red-crowned Parrots flew towards us!  I pulled over post haste and had Chad and Marge jump out of the car, where they were able to see the first of their target birds (and that’s a good one to get under the belt early)!


On to Frontera, where once again they were open early, and once again Chris Benesh had yet another group trying to track down the grosbeak! J  After some initial bantering we agreed to alert each other if we found it, then went our separate ways.  I did hear a Clay-colored Thrush, so we went that direction until Chad informed me that he had seen tons of them in Costa Rica (their national bird, after all J), so we decided to go into the forest, but not before getting crippling views of a Buff-bellied Hummingbird that was stretching itself by the water feature, and a great belly view of a White-tipped Dove that decided to perch right overhead!


We passed by the manicured pond south of the fenceline, where a few Black-bellied Whistling Ducks took flight while a cute little pair of Carolina Wrens hopped right up on a small bush and a couple of Hermit Thrushes thooked from the woods.  Marge spotted a pair of noisy Kiskadees, and I think this turned out to be her favorite bird as we had many great looks at them drinking, flopping around, and being typical Kiskadees! J  We reached the little resaca and walked the new little dead end trail where a feeding flock came in which had two Northern Parulas in it (not the Tropical, alas)!  While we were working that flock a big line of Snow Geese went overhead which included at least one Ross’!


The trail to the new observation deck was cordoned off (probably because the trail was too muddy), so we meandered back the other way, getting a glimpse of a very mad Long-billed Thrasher, and of course witnessing tons of Turkey Vultures taking flight (and yes, the aroma was quite strong…)!  We eventually stumbled onto the “feeders in the round” (where all the fancy benches are) and enjoyed Black-crested Titmice, Cardinals, and the fattest Fox Squirrel any of us had ever seen!  Then we stumbled onto a feeder area that was totally new to me since I was there last, and here we enjoyed the Chachalacas and White-tipped Doves coming in for breakfast!  Chad and Marge got brief looks at some Green Jays as well. 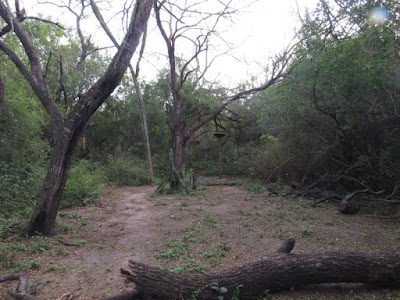 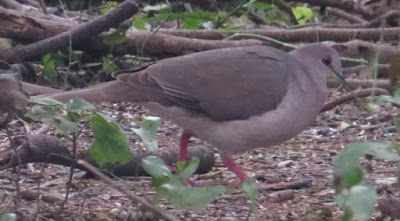 
Since this was just a half day of guiding, we needed to scoot to Estero Llano Grande, so we found our way out, adding a singing Black-and-white Warbler in the parking lot.  We practically had the place to ourselves, and at the deck at Ibis Pond quickly added another target bird, the puffy little Least Grebe!  A couple of male Cinnamon Teal were nice amongst the duck throng, and a female Vermilion Flycatcher flopped around one of the shepherd’s hooks.  As I got us checked in, I sent them over to the hummer feeders to enjoy themselves, and after hitting the ladies’ room, I found them happy as peaches as they had just seen the Bullock’s Oriole!


It was clouding over a little bit, so I suggested heading straight out to Alligator Lake for the Pauraque and owl.  On the way we saw a little Sora swimming across Dowitcher Pond, and Grebe Marsh had a nice Greater Yellowlegs and battling Solitary Sandpipers!  Making the turn to the lake, the trees across the way were full of night herons of both flavors, so we got scope views of those beauties!  At the first overlook, Chad announced he had an American Bittern, and at first I thought he was talking about the young night heron in front of us, but when he got me looking the right direction, he had indeed found a bittern hiding on a clump across the way!  I was jazzed!  One of the singing Long-billed Thrashers finally decided to show across the pond as well; not the best look, but better than we’ve had!
Battling Solitary Sandpipers 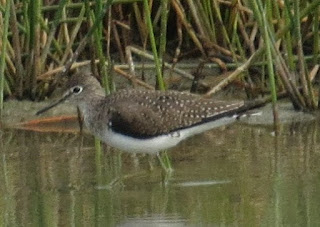 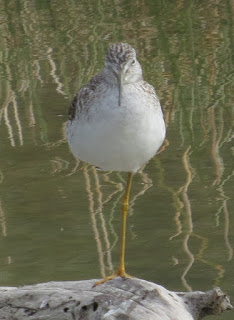 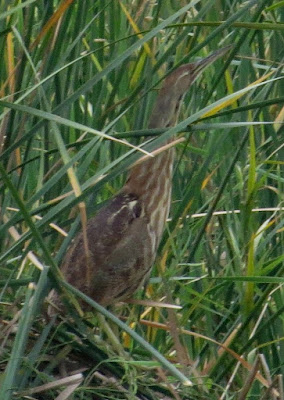 
The Pauraque was next, and thankfully he hadn’t found a different roosting spot and was easy to find!  Both Chad and Marge were just awestruck with this bird, and it was hard to drag them away to view the Screech Owl, which I advised them to put “in the bank” in case the ornithological authorities decided to split “McCall’s” Screech Owl in the future!  A peek at the main overlook added the Anhinga pair and the requisite Alligators, plus some cute Pied-billed Grebes.  We were getting ready to hike Camino de Aves in hopes of Common Ground Dove, but as we took a look at some Chachalacas on the trail behind us, what should also be feeding on the ground but a pair of the Ground Doves!  Chad was a very happy camper with that (and so was I, as it saved some walking J)!  Heading back out to the bridge we got a quick glimpse of a Bobcat that had been sitting on a log! 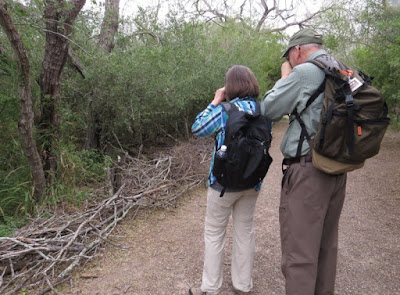 Enjoying the Pauraque behind the barrier!

Anhinga (female above, male below) 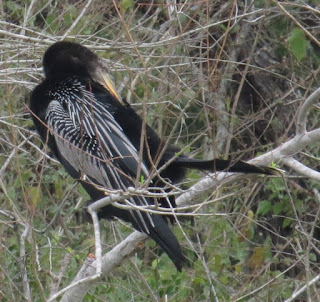 We then took a quick look at the whole of Dowitcher Pond hoping for Stilt Sandpiper, but got a nice Redhead instead.  Curlew Pond had a mob of Snowy Egrets and one Tricolored Heron, so from there we headed straight back to the VC to enjoy the feeders before we had to head back.  The immature Black-chinned Hummingbird came in for a sip, as did more Chachalacas, but the oriole never returned. 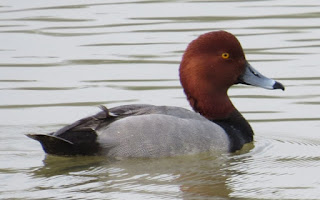 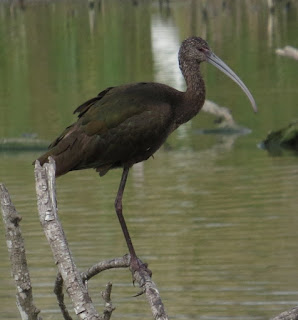 Posted by Alamo Inn BB Gear and Tours at 1:07 PM