Targets for a Hill Country Texan


Ceil from the Hill Country already had a head start as she arrived and “hit the ground running” so to speak, visiting several hotspots on her own before our official “guiding day” and bagging several target birds, including Santa Ana’s jacana!  She was a fairly new birder, so seeing life birds was a priority, but getting a picture was even better!  So after comparing notes the night before our outing, we decided to stick with the original plan (which included Anzalduas, Santa Ana, and Frontera), as those places could still yield some missed targets.


Since Anzalduas didn’t open until 8:00, we cruised down the levee in search of Ringed Kingfishers and saw some roosting Turkey Vultures instead, their red heads brilliant in the morning sun!  A growling Caspian Tern escorted us the rest of the way, after which we swung around and back to Anzalduas, where a pair of White-tailed Kites showed off along the entrance road!  We cruised slowly listening and looking for kingfishers and Northern Beardless Tyrannulets (she liked to call that one the bird whose name is longer than it is J), but to no avail; at least a calling Couch’s Kingbird kept the visit from being a complete bust!  The Burrowing Owl didn’t disappoint, and since Sally also needed Monk Parakeet, a visit to the nest in Hidalgo was a big hit, as the birds showed off beautifully (and she was pretty impressed with the nest, too J)! 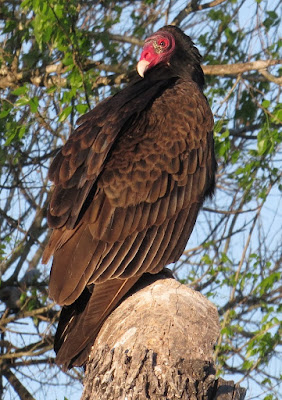 Turkey Vulture along the levee 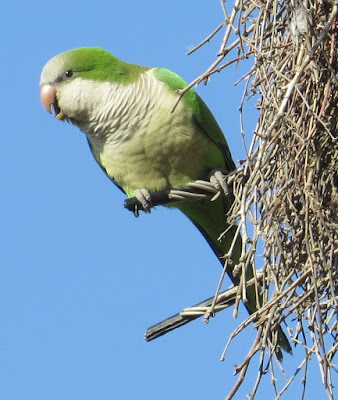 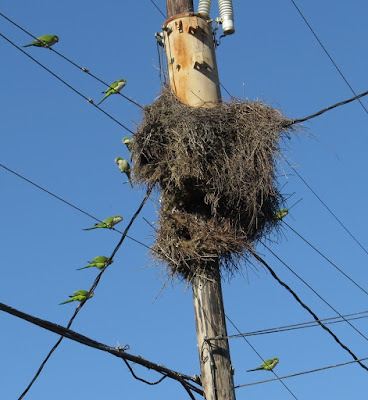 The nest with attendant parakeets
The Chachalaca Trail at Santa Ana was our last ditch try at the tyrannulet, but not a wheeK! was to be heard.  A quick scan down at Willow Lake yielded the regular ducks, coots, and grebes, but what sounded like a distant jackhammer at first turned out to be a distant Ringed Kingfisher, and another quick scan found him in a dead tree way in the distance (thank God I brought the scope)!  Ceil was thrilled, even though it was way too far away for a picture!


She had scoured Estero the day before and never made it to Frontera, so that was our next stop.  I had lost track of how many times I had taken visiting birders there (or even going myself) in hopes of seeing the Crimson-collared Grosbeak and Blue Bunting and never finding either of them, so I was hoping maybe things would be different this time, especially with all the eyes looking (judging by the packed parking lot)!  After signing in and learning that the grosbeak hadn’t been seen since Sunday L we started poking around; the wintering Ovenbirds would get us going, and an oliveish-looking bird we spooked off an orange turned out to be a Clay-colored Thrush.


Our first vigil was the “Big Log” water feature, as the Blue Bunting was said to frequent that spot.  After waiting patiently on the bench for about ten minutes, I couldn’t believe my ears:  off to the side was the high-pitched Wheeoo! of the Crimson-collared Grosbeak!!  She was doing some other vocalizations as well (including a short one-pitched whistle), and when we finally tracked her down, she sounded like we were right on top of her (got a fabulous recording), but we just could not spot her to save our lives!  We were on the “Dead End Trail” at that point, and turning the corner to see if we could find her again, we ran into fellow guide Michael Marsden who was also leading some clients, who announced they were looking at the Blue Bunting!!  After several fevered moments of trying to spot this dark bird with bright highlights in an understory of light and shadow, suddenly the bird hopped into view for the briefest of moments and then was gone!  But the good news was that Ceil got a fabulous view!  We then returned to the Dead End Trail to try and kick up Mrs. Grosbeak, and after a few minutes a gentleman showed us a superb picture he had just taken of the bunting at the trailside water drip (where we had all just been standing)!  So needless to say, we set up a vigil for about 15 minutes but the bunting had assuaged his thirst…
Crimson-collared Grosbeak Call﻿


Michael had told us about a Ringed Kingfisher they had at The Big Pond along with a Groove-billed Ani, so we continued on through the Sabal Palm Forest and over the Boardwalk (scaring a Belted Kingfisher and a Great Egret in so doing), then passed the little bogs on the way to the Big Pond, where we didn’t see much of anything (but a Green Kingfisher did go zipping down the nearby Resaca).  Since Black-headed Grosbeak also would have been a life bird for Ceil, we decided to do some feeder-watching and were duly entertained by Chachalacas, White-tipped and Inca Doves, Cardinals, titmice, and the Fox Squirrels sprawled over the feeders, but no grosbeak came in.  However, I did hear the Ringed Kingfisher call (and it sounded like it was sitting and not flying), so I asked Ceil if she wanted to try for a picture. 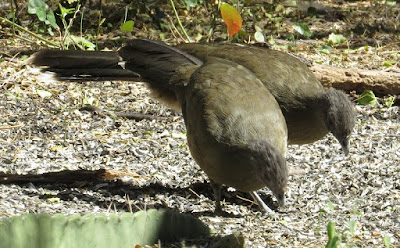 Plain Chachalacas
Thus began the Mad Kingfisher Dash as we followed the rattle first to the Big Pond Blind, where we couldn’t see any birds but did see a big crowd on the platform across the way (and a Two-barred Flasher bopping around close by, which is a nice butterfly for the Valley).  Figuring the kingfisher was gone, we went back to the feeders, only to hear the thing again, so back we went, and this time at the blind we heard the ani!!  Since we couldn’t see it from our vantage point, we headed over to the platform, running into a guy with not one but two “big guns” who was hoping he’d get a better view of the ani from the blind!  That never happened (as we could tell from our vantage point), but the bird did pop up briefly enough for Ceil to get an identifiable look!  But the icing on the cake was Big Mama Kingfisher wheeling in and perching on the dead tree in great light, allowing Ceil to get a knockout shot!  That was definitely the highlight! 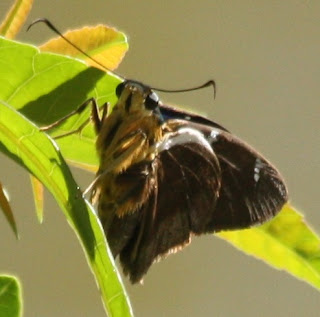 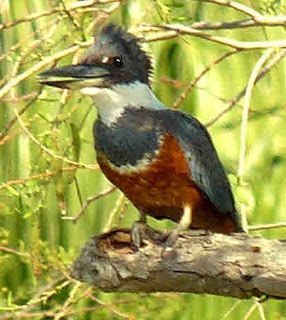 Ceil's Ringed Kingfisher, copyright 2016 by Ceil Worden
It was getting close to quitting time, so we had to prioritize J:  since the Blue Bunting was the rarest (we didn’t think the Crimson-collared was gonna cooperate), we decided to set up vigil at the “Inner Drip” that it was frequenting, but it never showed (although the lady Painted Bunting that had been following it around made a brief appearance down the trail).  All in all, we couldn’t complain:  Ceil was thrilled with her kingfisher photo, and I was pleased as punch to get a recording of that grosbeak!  Bird List: