A Lesson in Vireos


On this last guiding day (and a gorgeous one at that) we decided to clean up some needed birds; first stop was Hidalgo and the resident Monk Parakeets, which proved to be an easy and cooperative lifer!  Next we went over to Anzalduas, stopping at the “secret rock pile” to enjoy not one, not three (like we had last time), but four Burrowing Owls!  That was definitely one of the highlights of the day (and the morning light was perfect)!


When we got to the park, the potties were the first order of business, but a feeding flock right outside the restroom got us all distracted!  What would have been Chad’s life Northern Beardless Tyrannulet was calling right there, but we were all focused on a Solitary-type vireo that in California might be called a bright Cassin’s, so I madly took pictures while Chad tried to stay on it:  what caught my eye was the fact that the bird didn’t look as “contrasty” as most Blue-headeds that I’ve seen, and it looked suspiciously like a bird in California I initially thought was a Blue-headed (that did seem to show a contrast between a gray head and an olive back, with bright yellow sides), but was told was just a bright Cassin’s.  One major field mark to look for is the level of contrast between the hood and the throat (very sharp in Blue-headed, less so in Cassin’s), and the edges seemed a little blurred in this bird.  Feedback from a lot of great birders far and wide confirmed that it was indeed a first-year Blue-headed (although we had a couple of votes for Cassin's, and one prominent birder said it was safer just to call it a "Solitary")!  Also in the flock was a Black-and-white and Pine Warbler. 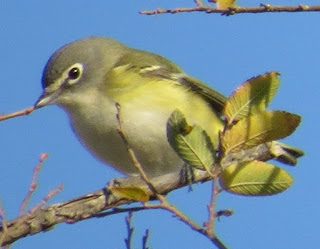 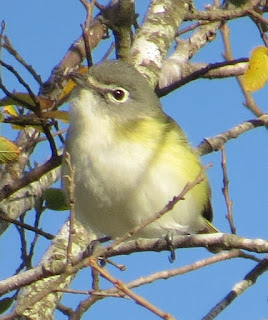 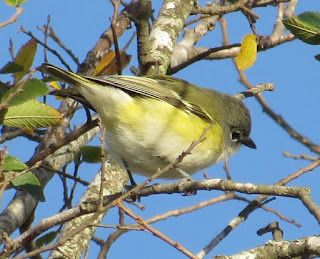 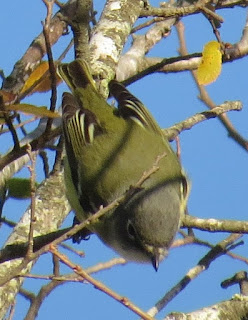 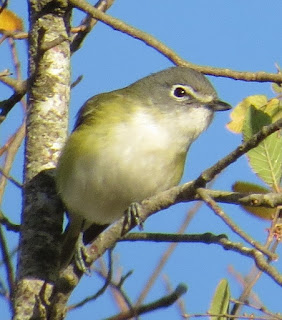 From there we headed to the “Pipit Field” and did the scrimmage line, but to no avail (we only kicked up what I suspected were Savannah Sparrows, but I didn’t get a good look).  So we headed on to the area where the Greater Pewee had been hanging out, and he didn’t materialize, either! L  So we cruised around, picking up “our” House Finches that even Chad and Marge ooohed and ahhhed over, saying they were much redder than theirs!  A sparrow flock included Lark and Chipping, along with a female Pyrrhuloxia.  We passed a van full of birders who informed us that they had found the Greater Pewee, but over by the entrance, then asked us about the Black-throated Gray Warbler!  I had forgotten about that guy, actually (a wintering bird that shows up sporadically), so I told them about the “Secret Trail” over by the dam where the bird usually is, then headed over there ourselves! 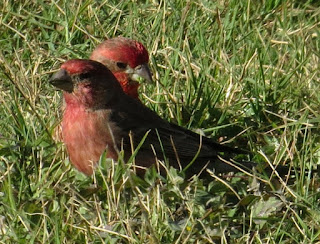 Anzalduas is one of the few places in the Valley where House Finch is considered reliable; otherwise they're considered a vagrant!
There’s a leg of the park road that runs parallel to the Rio Grande but perpendicular to the levee, and where this road starts to veer left and parallel the levee, there’s a little hidden trail that leads right to the base of the dam, where there’s a small “window” where you can even see some of the rocks on the other side where water birds like to hang out.  Today we were able to spot White Pelicans, both types of cormorants, and a few Spotted Sandpipers, as well as a Black Phoebe that showed well.  No warbler, so we went back and worked the outside of those same trees when I heard the Tyrannulet!  Thankfully everyone got on him, and he put on a great show!  While all this was going on a Caspian Tern was playing with his supper by continually dropping and catching his fish, and a young White-tailed Hawk powered overhead!  We made another potty stop, after which Chad announced he had seen the Zone-tailed Hawk!  I had little doubt from his description!


We continued to crawl, enjoying the wintering Eastern Bluebirds and a fly-by Ringed Kingfisher, until we got to the entrance grove, but couldn’t find the pewee.  However, Chad and Marge were up for another hike across the field, and this time I had more hope as a big flock of American Pipits were feeding close to the road, just like they were when I brought Joe and Mary out here.  We had to go a little further this time, but finally a sharp Pike! announced the presence of the little beastie, and everyone got smashing looks at the Sprague’s Pipit!  High fives all around! 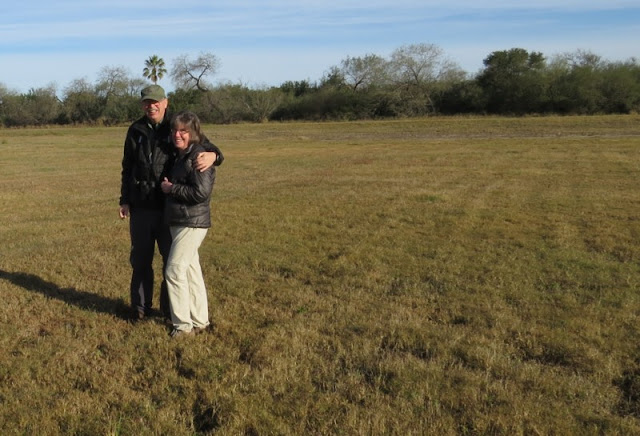 "Chad and Marge" in the Sprague's Pipit Field 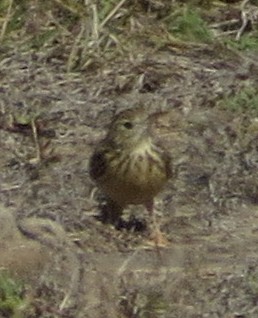 Distant view of said Sprague's Pipit
It was time to head home after that, happy with a very successful four days!  Bird List:

Posted by Alamo Inn BB Gear and Tours at 1:26 PM