The next two days were supposed to be nice and sunny, but we were sweating a little as we started out for Starr County in the fog and mist!  Because of that, I decided to do Falcon State Park first, as we could at least stay in the car until the mist let up!  The road in gave us the first of many Pyrrhuloxias and a flock of Chipping Sparrows, and just past the entrance gate a flock of Cedar Waxwings posed in a dead tree!  Joe and Mary’s life Curve-billed Thrasher made an appearance shortly after that, but things really didn’t start hopping until we poked around the boat ramp overflow area (they got a taste of “4-wheeling”… J), where a Cassin’s Sparrow showed nicely and an “Audubon’s” Warbler came in to pishing.  The park no longer stocks the feeders, so I didn’t hold out much hope around the Rec Hall, but one of the park hosts did have a feeder going where a Long-billed Thrasher bullied a Pyrr off the crossbar!  I did hear a Black-throated Sparrow sing as I approached the old blind, so we walked down the road and took the part of the nature trail that wound back to the rec hall, but saw virtually nothing.  After a quick stop at the hall to use the facilities and swipe some cookies and coffee J we made a fruitless search of the picnic area (try as we might, we just could not turn any of the Blue-gray Gnatcatchers into Black-tailed), but hit pay dirt in the cabin area where a big covey of Bobwhite was feeding!  The big miss there (besides the sparrow) was Roadrunner, as they really wanted to see one of those (and with good reason)!  I was about as bummed as they were! 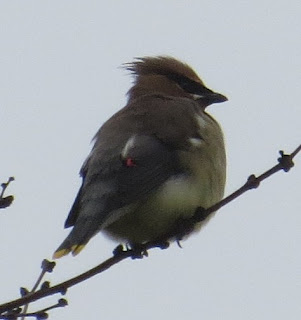 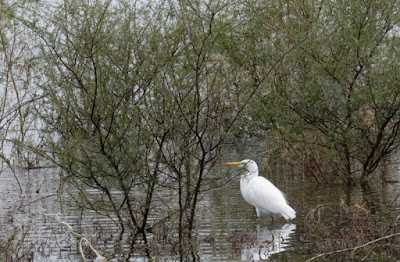 Great Egret hiding in the swamp 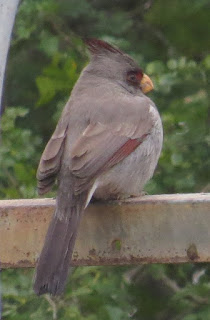 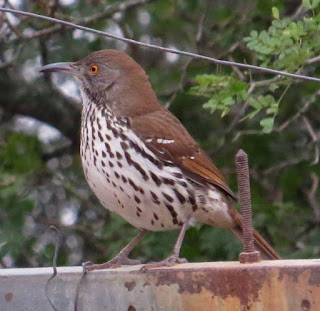 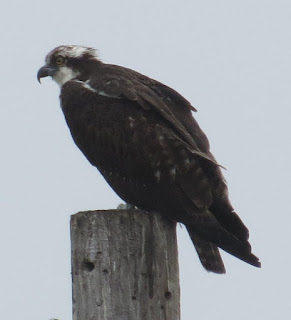 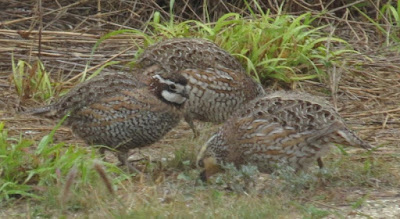 
By that time the mist had pretty much let up, so we decided to head straight to the feeders at Salineño, and that was the show of the day!  Merle was there to greet us, and we pretty much had the place to ourselves and a few Winter Texans who showed up about 30 minutes after we did armed with nothing but their IPhones, but they asked a lot of questions which allowed Merle to relate a lot of info about the birds, what they eat, the history of the area, and even the border security issue!  While we were there no fewer than four Audubon’s Orioles (the real target species here, along with their wintering Hooded Oriole) came in constantly, along with many Altamira Orioles, Kiskadees, Cardinals, Green Jays, both flavors of woodpecker (including a lady Ladder-backed that had a very faint “bracket” on her face), and of course tons of Red-winged Blackbirds and House Sparrows with the odd Brown-headed Cowbird and Great-tailed Grackle thrown in.  I was thrilled that an Olive Sparrow came out in the open, and as both Joe and I were focused on the sparrow, Mary saw this big, long-tailed stripy thing in another part of the feeder area, but no one seemed to get excited, so she let things be until someone announced a little later that a Roadrunner was in the back corner!  I was so happy that they finally got to see one!!  When we left to go down to the river the same guy came tearing out onto the road and gave a great look!

Merle puts out the food, and the show begins! 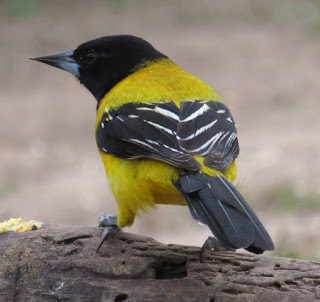 Male (above) and female Audubon's Orioles 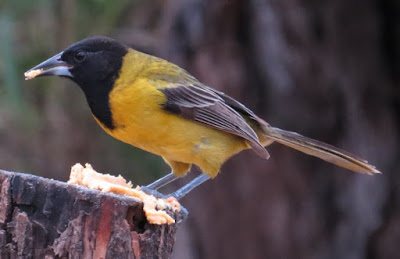 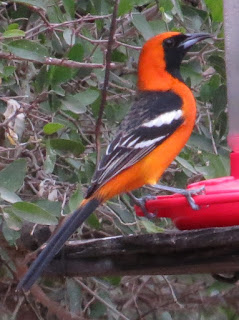 Hooded Oriole, rare in the winter 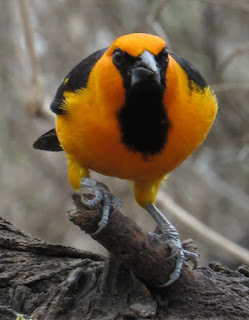 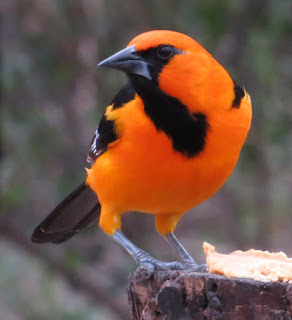 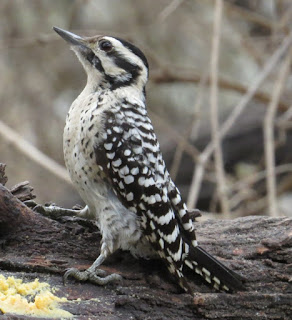 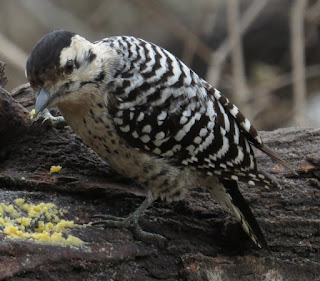 Another female Ladderback with a very pale "bracket" 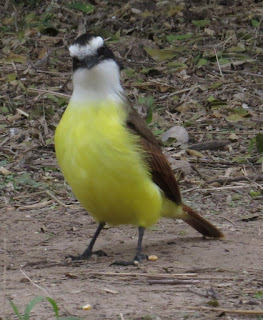 Kiskadee with an attitude... 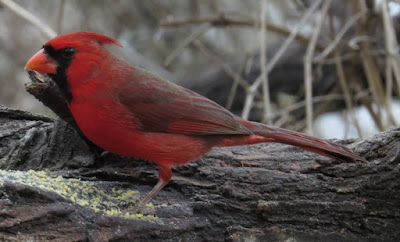 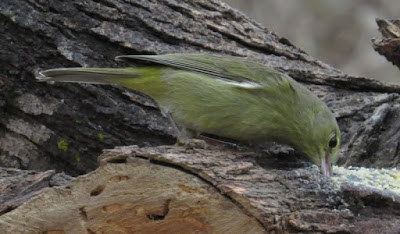 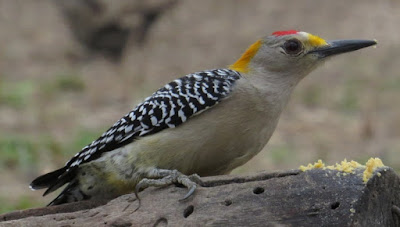 
We set up vigil for another hour at the boat ramp, and while still overcast, the fog had lifted, so we had a great view both up and down river.  A Spotted Sandpiper came wheeling in as if on cue, and kept us company the whole time we were there!  While the two “most wanted” river birds never showed (Muscovy Duck and Red-billed Pigeon, both of which are rare anyway), we got great views of two different Ringed Kingfishers, a classic Red-shouldered Hawk, another Black Phoebe, and three different Gray Hawks!  Ospreys were all over, and a male Bufflehead was down by the island.  We walked the westbound trail where the White-collared Seedeater had been reported, but we bagged nothing but Yellowthroats and the aforementioned second kingfisher.  All three wintering swallows were swooping around, and on the hike back to the car a Vesper Sparrow popped up but was rather uncooperative for decent pictures. 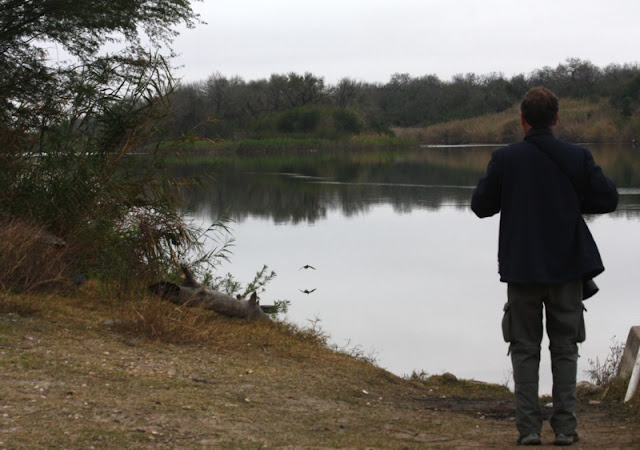 Joe scans the Rio Grande while a Spotted Sandpiper wheels in (can you spot him in the above picture?) 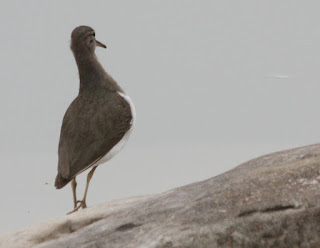 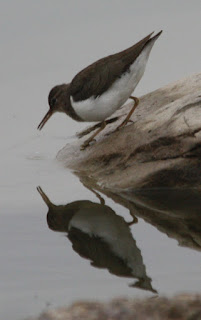 Mr. Spotty then proceeds to strut and admire himself! 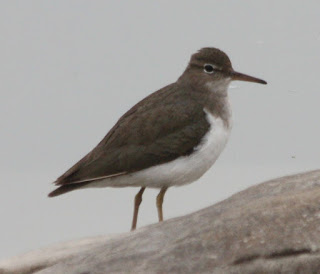 Before long it was time to head back, but as we approached McAllen I suggested maybe cruising up 10th Street in hopes of bagging some Green Parakeets, seeing as it was nearing the time that they should have been staging.  Alas, we searched well past Trenton with no sign of the beasties, so we headed back to Alamo with 72 species under the belt for the day.
Posted by Alamo Inn BB Gear and Tours at 2:33 PM