Pyrrhuloxia and Roadrunner were big target birds for Bill, so I planned on taking him and Randee up to the La Sal del Rey Route (aka Brushline Road and environs) today, but the night before I received an e-mail from Randee requesting more walking, as they’d be heading home afterwards and would be spending lots of time in the car!  After pondering what to do, it dawned on me that I had seen a new trail and parking lot along SR 186 going into the tract, so that along with the two established trails to the actual La Sal would provide plenty of hiking ops (and I was curious about that new trail anyway), so they said that sounded like a plan!  We took the back way up FM 493 and bagged five Sandhill Cranes and a Red-tailed Hawk on the way!


I almost missed the parking lot as it was right in the middle of the construction (you actually had to cut over said construction to get to it), and since I didn’t know how long the trail was I opted to set my timer for 15 minutes and then turn around at that point.  It was a two track trail, pretty overgrown in the middle, but had thick thornscrub on one side and open mesquite savannah on the other, where an adult and immature Harris’ Hawk put on a show, and a brilliant male Vermilion Flycatcher posed on a pile of wood.  The trail made a left turn soon before my beeper went off, and we were able to call in some Orange-crowned Warblers and a Butterbutt, but that was about it.  On the way back a pair of Cardinals got our juices going… 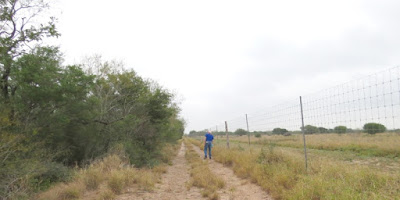 Bill on the first part of the trail 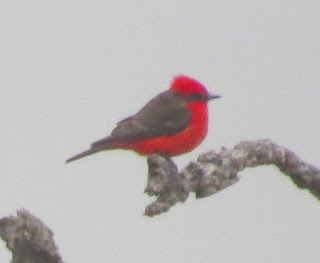 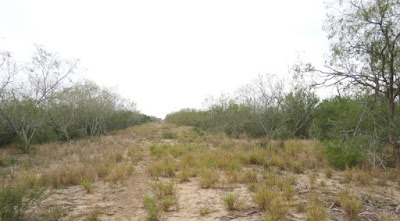 Two views of the trail at the turnaround point - looking west... 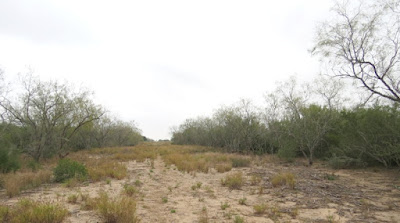 From there we crawled up Brushline Road, enjoying a pair of Caracaras, hearing stubborn Verdins and a Long-billed Thrasher, and seeing many showoff Mockingbirds (plus a single Kiskadee that landed on the wire).  At one point we had a feeding flock that included two titmice and a cooperative lady Ladder-backed Woodpecker!  Before long we came to the trail to the lake, so we hiked that, and although it was breezy (as opposed to windy), I was a little dismayed at how quiet it was.  But the absolute highlight was a family of Javelina rooting around on the trail, including an adorable little baby!  Too bad I wasn’t on the ball enough to get a video… L 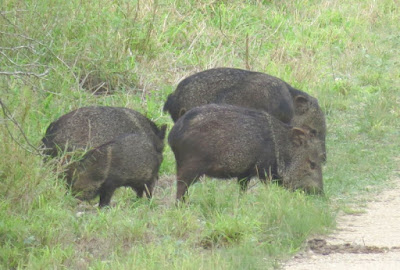 
We made it to the lake which was absolutely devoid of birdlife (except for a calling Bewick’s Wren), but Bill enjoyed reading about the history of the lake and the Ocelots of South Texas on the interpretive signs.  About the only other things of interest along that leg were the communal Nilgai bathrooms (plus the one we needed…).  An Olive Sparrow lisped from the grass, and I heard a very distant Red-shouldered Hawk on the way back, plus a singing White-eyed Vireo that was way back in the bush. 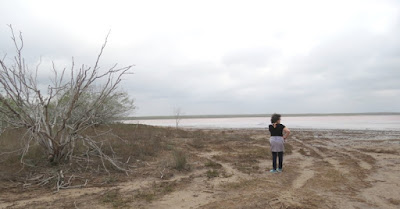 Randee and Bill checking out the scrub


Rather than go to the third trail, I was convinced we needed to continue to cruise the road if we were going to bag the targets.  Thankfully eagle-eye Randee in the back seat spotted a crested bird in the brush, which turned out to be our Pyrrhuloxia!  It wasn’t the best look, but they could clearly see the face and the bill, which blew them away!  Making the right hand jog at the north end, she again spotted a small flock of Pyrrs, again hard to see, but once you got on them, the face and bills were clearly visible!  I mentioned that the owner of the property ahead of us had a “pet” Emu that sometimes made an appearance, and no sooner had I made the turn than there he was, right next to the fence and rumbling at us (probably wanting a handout, said Randee… J)!


We quickly checked out the farm pond, which had a nice variety of things:  most unusual was a troupe of Green Jays that worked their way through the brush!  In the waterbird department, we had both Great Blue Heron and Great Egret, both grebe species, several kinds of ducks, some stilts, and a couple of Long-billed Dowitchers thrown in!  We also spotted a large exotic deer with an odd, double-pronged set of antlers that, after an Internet search, looked like it might have been a Rusa Deer.  From there we had to scoot back to the Inn, still hoping for a Roadrunner (a pair of Curve-billed Thrashers had us going for a minute), but it was never meant to be; what we did see on the way out (besides birding buddy Huck J) was a huge male Nilgai close to the road! 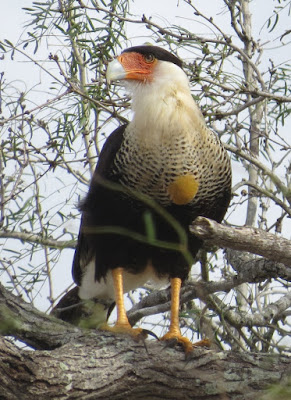 We ended up with a very modest 46 species for the morning; I was disappointed at the lack of species, but we really did end up having a great time “making lemonade” as Randee said! J  Bird list: