I got the text Wednesday morning:  my friend Barbara wanted to do some last minute year-birding over the weekend, and was I available?  Certainly!  So we booked, and the original plan (seeing as I was committed to the Santa Ana CBC on Saturday) was to search for the becard and the scoters on Sunday morning, take a break, then head out to Oliveira Park that evening for the parrots!  However, the weather got in the way, and while Barbara actually visited the Butterfly Center on her own on Saturday, they had closed the Back 40 due to the rain (and the roads were probably impassable anyway; half of my CBC section sure was… L).  Then later that day she got a text from a family member that required her to leave Sunday instead of Monday as originally planned, so she asked if we could do the “parrot thing” that night, and then look for scoters the next morning, and she could go straight home after that.  Sounded like a plan, so she offered to drive (through the rain again L) to Oliveira Park in Brownsville!


She actually had nailed the Lilac-crowned and Yellow-headed Parrots in McAllen the night before, so all she needed were the Red-lored and White-fronted (and Oliveira is usually the only place you can get the latter).  Once we got there we picked up a pretty female Vermilion Flycatcher, and a bright chirp from the eucs revealed a Yellow-throated Warbler!  We then circled around a couple of times, but didn’t have to wait long before a large flock of about 200 parrots wheeled into the south end of the park!  It was still drizzling and the light was horrible, so it was hard seeing any detail (even with the scope), but I photographed some of the birds on the wires, then took video of several soppin’ wet birds that flopped into the anacua tree next to us and proceeded to chow down!  I thought maybe I had a Lilac-crowned amongst them (the vast majority are Red-crowned Parrots, and first-year Red-crowns can look deceptively like Lilac-crowns), but looking at the video later I concluded that between the gloomy light and the wet feathers, it was just an optical illusion (plus the fact that the tail of the LCPA is longer, and these tails all looked about the same length). 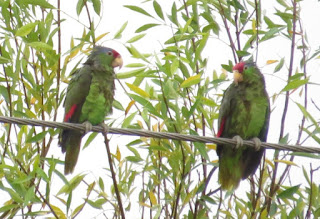 Chowing down on anacua berries

Barbara braved the rain (along with another young couple whom I would discover later was the very couple I was scheduled to guide Tuesday!) and scoured every bird in the eucs, and finally found one that looked like it had a few soaked streaks of yellow feathers on the cheek (check off Red-lored)!  We were puzzling over the White-fronteds until part of the flock moved from the eucs to another tree, and several of the birds were noticeably smaller, a good clue!  I then heard the higher-pitched chop chop calls coming from high in the tree amongst the more throaty Red-crowned calls, but try as we might, we couldn’t spot any.  I felt confident we had them, however (enough to count them for the year), and after we got home and I downloaded the pictures, I discovered that those wire parrots were indeed Whitefronts after all – we just couldn’t see the white in that gloom! 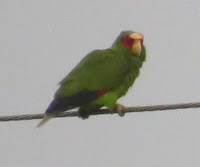 In the meantime Barbara had gotten a report (she gets hourly Year Need reports from eBird) of a Mandarin Duck somewhere on Shary Road, so that’s where we headed first the next morning, even though we both figured it was an escapee…  It was reported at a place called Bannworth Park, which I had never heard of, but the minute we pulled in we could see it was a good hangout for ducks, “foreign and domestic”!  Black-bellied Whistling Ducks were all over, but so were tons of free-flying Muscovy Ducks!  (One came right up to me as I got stuff out of the car, hissing and wagging his tail expectantly…)  The “funny ducks” and Chinese Geese were all over as well, along with some “countable” Black-necked Stilts, but we quickly spotted the male Mandarin Duck in all his glory!  Unfortunately the green “ring” around his leg confirmed the fact that he was probably from a private collection and had gotten away, but we still input him just for the heckuvit… 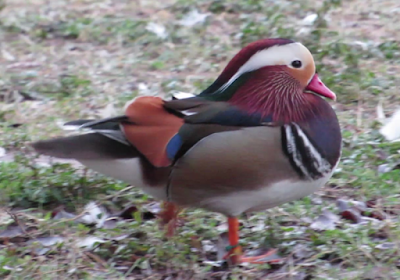 Even though Barbara drove again that morning, she was going to follow me up to Delta Lake so she could head straight home after searching for the scoters, so we made a quick stop at the Inn to pick up Heppy, and then were off again!  The bad news was that a heavy fog had descended, and we didn’t have much hope of being able to see much out on the lake L.  But it did feel like it wanted to burn off, so after enjoying a male Green Kingfisher right from the parking lot (along with an immature Red-shouldered Hawk) we got the scope and made a walking loop along the highway down to the south side of the lake and back; the highlight along here was not one, but two Yellow Warblers chirping away! 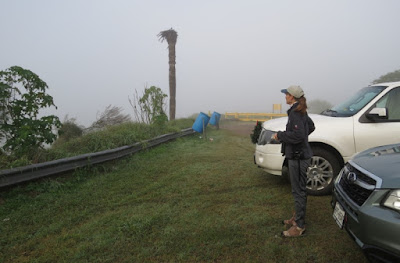 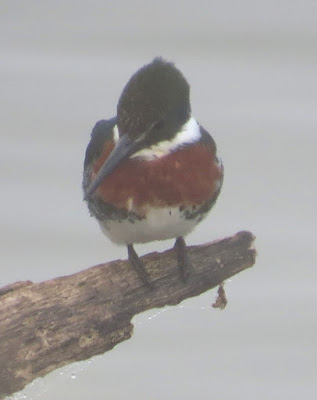 Male Green Kingfisher in the haze 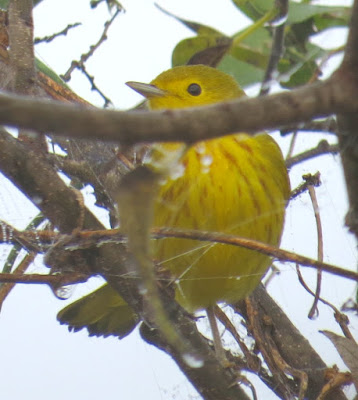 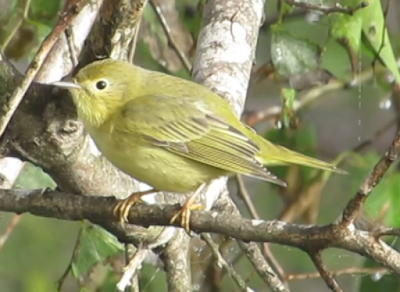 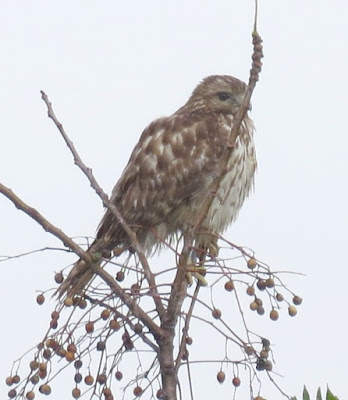 Close to shore we had a Black Phoebe, a couple of sparring Spotted Sandpipers, several Least Sandpipers, and a peeping Swamp Sparrow in the reeds!  There were some diving ducks out there, but all we could pick out were Ring-necked Ducks and Lesser Scaup…  At least three road kills (one was a Beaver!!) had the Turkey Vulture mob waiting in the wings for us to wrap up and go away, but as we checked the east side of the road the fog miraculously lifted, and we able to see far enough out into the lake to confirm (as best we could) that no scoters were present with the rest of the ducks (although we did pick up three female Ruddy Ducks).  Lots of coots, dabblers, and grebes were about, along with three Anhingas that kept going from tree to tree!  A Green Heron sat staring at us, and a Black-crowned Night Heron quarked at us, but another heron that I assumed was an immature night heron at first morphed into an American Bittern, my first for the year! J  He landed in the reeds, and would eventually stick his head and neck out, right where a Sora had come out previously!  A female Green Kingfisher made a fuss and showed nicely as well, along with a couple of Caspian Terns that were batting around.

Checking the east side of the road 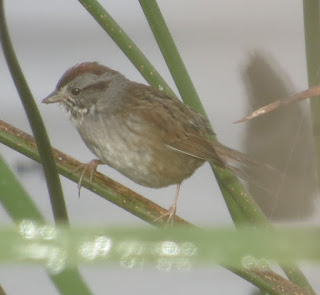 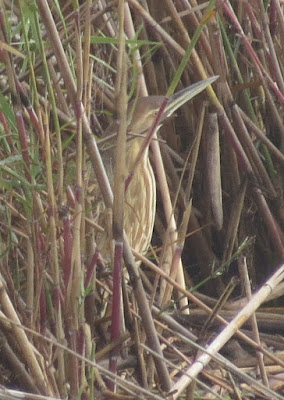 Barbara had seen some rafts from within the park when she had stopped on the way down, so we went on in, but the rafts were gone… L  We did pick up a few things for the day, such as Osprey, some Long-billed Curlews in the field, and a pair of Long-billed Dowitchers that came wheeling in.  After a potty break we headed to the 1015 Pond (where apparently someone had reported the scoters as well), but that visit was short-lived as there were a couple of duck hunters hidden in the reeds (thankfully shooting that way), so there was nothing there anyway except their decoys (most of which were Mallards, which we rarely get down here anyway… J)! 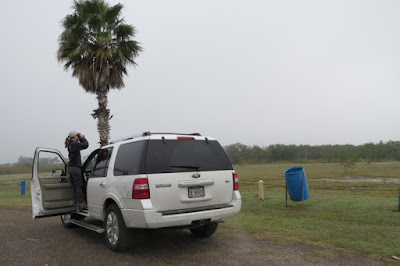 Checking for rafts within the county park

So at that point we kissed goodbye and Barbara headed for the Hill Country, while I headed back to the Inn!  Between last night and today we came away with a nice list of 71 species!  Bird list: