Dawn opted to drive this day, seeing it was such a long haul up to Salineño!  The day promised to be full of surprises when at the traditional Stripes potty stop in Roma a big flock of Green Parakeets screeched overhead!  (Poor Janice was still getting out of the car by the time they were just dots in the distance… L)  Once up at Merle and Lois’ we initially spent an hour at the feeders, enjoying the regular visitors (even though they were quite skittish for some reason):  a Bewick’s Wren came in for the first time in several years it seems, and I was tickled to see the Bobwhite come in!  An Olive Sparrow showed well, while a Long-billed Thrasher showed briefly.  I thought their resident Cooper’s Hawk was making his presence known by calling, but the perp turned out to be a Green Jay – that’s a first!  Black Vultures flapped overhead, but no Zone-tailed Hawk this time.  After my standard hour the Audubon’s Oriole still hadn’t come in, so I strongly encouraged the girls to hang in there until he did, as this was their best shot for a photo (I’m sure they were getting antsy with other birders arriving at the feeders and announcing they had said Audubon’s down at the river…)!  Thankfully we didn’t have to wait long:  after Lois put out some more PB Baldy finally came in! 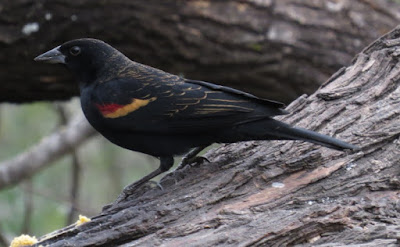 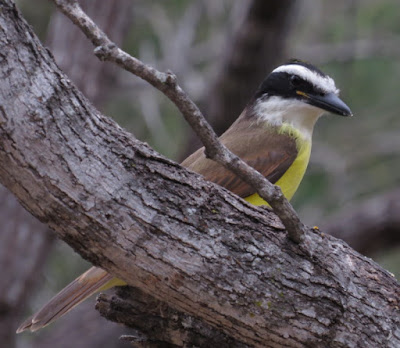 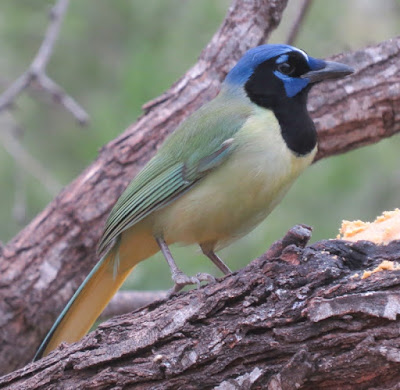 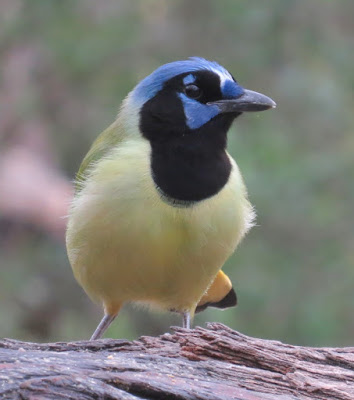 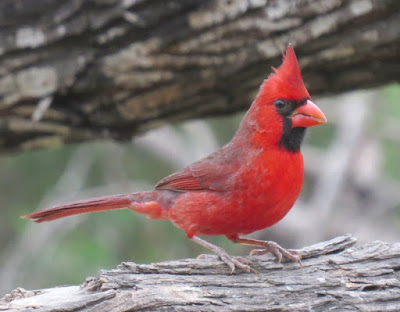 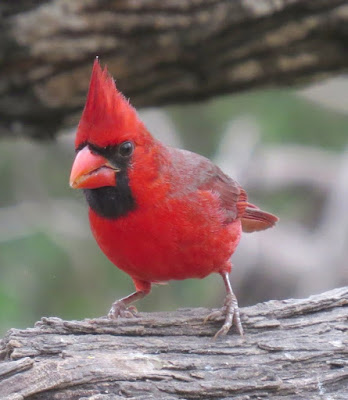 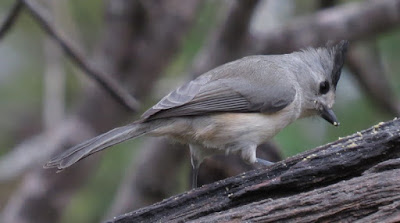 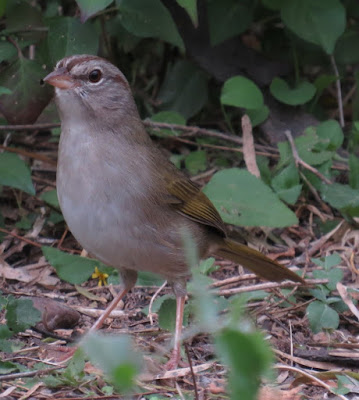 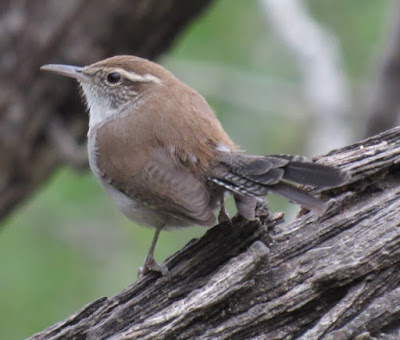 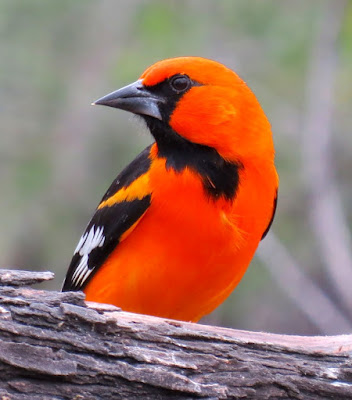 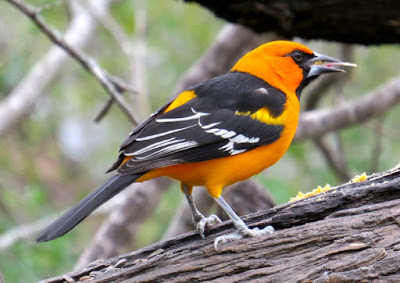 Check out the tongue! 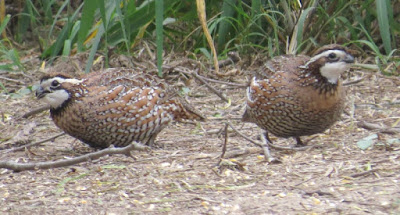 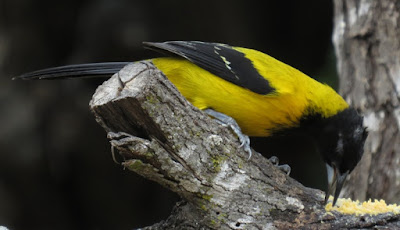 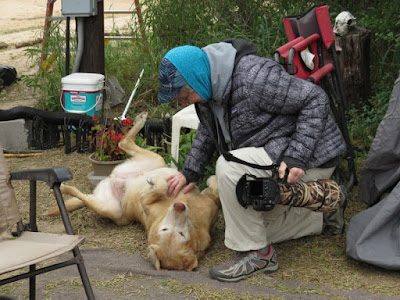 Janice (and Chamois) getting her doggie fix...

After that we checked out the Seedeater Trail; the cold and the wind didn’t help things as the only things braving the river was the resident Osprey eating breakfast (who always seems to be on that snag in the middle of the river) and a fly-by Neotropic Cormorant.  A very pretty Gray Hawk sat across the way, but the cul-de-sac was relatively birdless until I took a peek over the edge where a brilliant (and cute) Vermilion Flycatcher was posing!  I got Janice and Maureen to sneak up so they could get slap-your-face-off pictures J, but that was the extent of the excitement (we got to teasing Janice that she needed to start eating a PB sandwich before the seedeater would show up J).  However, all was not lost, as back at the ramp three Mexican Ducks flew by! 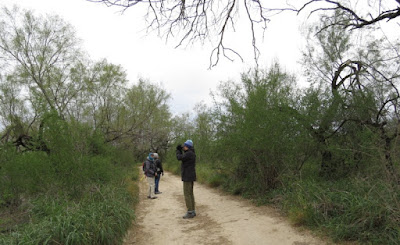 The girls on Seedeater Trail 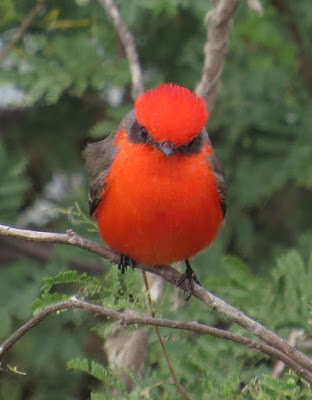 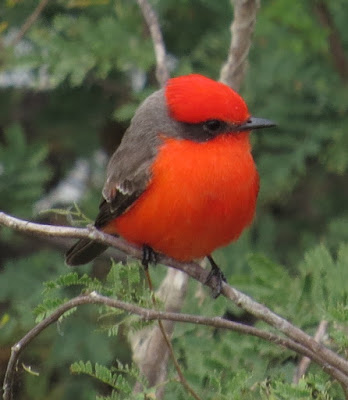 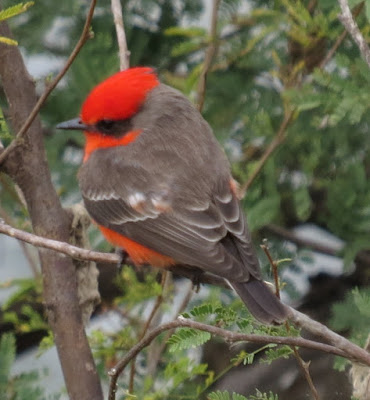 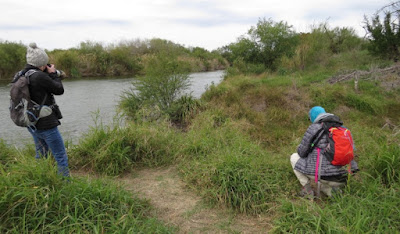 Maureen and Janice get their own shots!  (Bird not visible from this vantage point...) 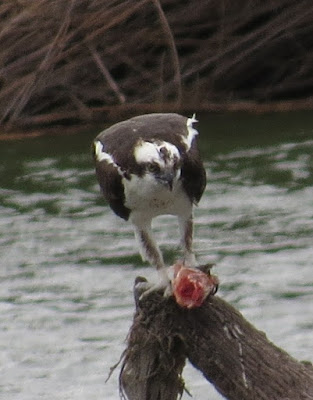 As is often the case, Dump Road had the most action along the residential street (which I’m hesitant to stop along anyway):  it was fun seeing Pyrrhuloxias and Cardinals feeding on the ground together, while a White-eyed Vireo came out in plain view in the scrub!  A Curve-billed Thrasher appeared on the floor, and across the street Janice had Black-throated Sparrows that the rest of us missed.  On the main part of the road Blue-gray Gnatcatchers showed, but try as we might for the Black-tailed, they were a no-show… We also tried for Scaled Quail – nothing (not surprising these days), but another Roadrunner popped up on the side!  In general the road was quiet, but a nice Cooper’s Hawk posed briefly on a pole.  In the grassy area we tried for Cassin’s Sparrow (nope), and Falcon County Park turned up zilch; it was just getting too breezy.  We went into the state park to use the restrooms but yet another Roadrunner distracted us!  The girls wanted to see “the” Falcon Dam, so we drove into the picnic area where you can get a decent view and had yet more Roadrunners!   Nothing was on the lake, but a hovering Belted Kingfisher put on a good show, and we had a lovely White-tailed Hawk on the way out. 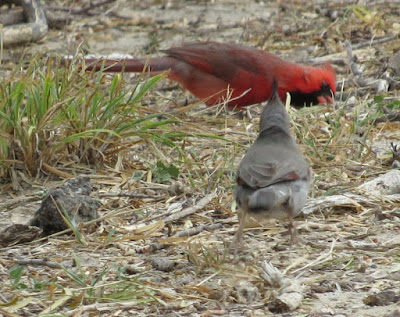 Cardinal and Pyrrhuloxia feeding together; the Pyrr has more of an "alfalfa sprout" for a crest! 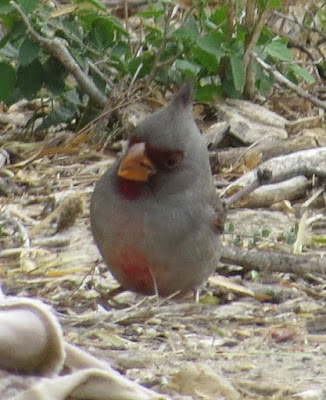 Better look at the Pyrr... 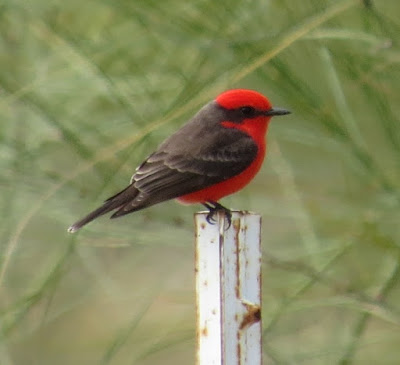 Yet another Vermilion Flycatcher

Sprague’s Pipit was on the Want List, so we headed to Anzalduas after that; a quick glimpse into the spillway wetland added some teal and Gadwall to the list.  I told the girls I had kicked up the pipit the Saturday before within two minutes of casually walking out there, so we were happy when the same thing happened (although neither of the birds landed where we could get extended looks; one has to be happy with a glimpse of the tail feathers, the “stair-stepping” flight habit, and the distinctive flight call)!  Also in the field were Caracaras, Western Meadowlarks, and Savannah Sparrows that would initially get our adrenalin going…

The Girls in the Sprague's Pipit Field

After that we cruised around the roads, where a very buffy-looking female Vermilion Flycatcher had us going for a minute (you’d be surprised how many female Verms are mistaken for Say’s Phoebes…).  A Harris’ Hawk sailed overhead, and a female Kestrel seemed to be enforcing the “SLOW” sign by sitting on it!  The Rock Wren would have been a lifer for some, so we gave it some time, but I think the wind was keeping it down…  Instead we enjoyed a Spotted Sandpiper sailing over the river on bowed wings, several Coots, and lots of Rough-winged Swallows swooping around.  A stop at the restroom produced a brilliant male Vermy Fly along with a pretty adult Gray Hawk in a dead tree.  On the way out another Belted Kingfisher hovered along the spillway, and we added a nice White-tailed Kite and Harrier at the end of the entrance road. 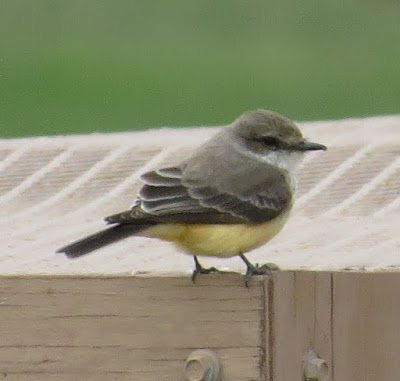 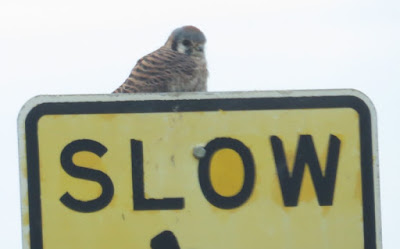 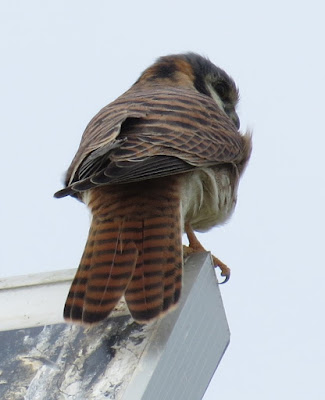 She later moves to a solar panel... 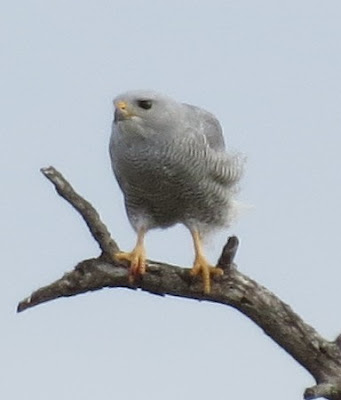 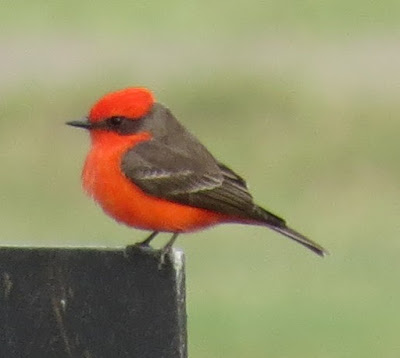 
Once I mentioned Burrowing Owls, the girls couldn’t resist J, so we made a quick stop at Granjeño!  With all eye scouring the rocks below the levee, it didn’t take long for Janice (I think it was) to spot one of the little guys, and everyone got great looks (and hopefully pictures)!  Headed home after that, where I added a Tropical Kingbird tittering at apartments after they dropped me off! 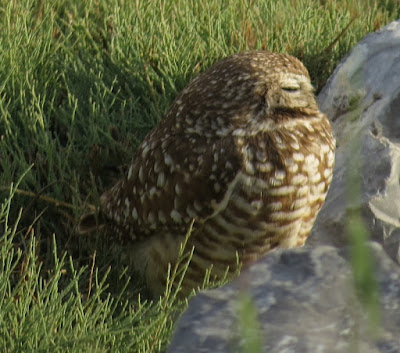 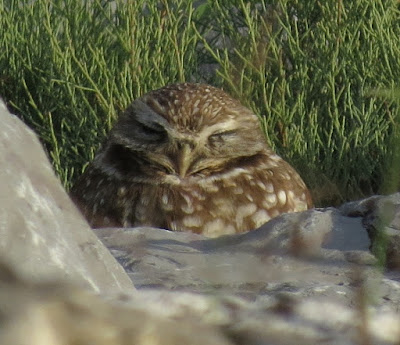 Maureen and Janice get their shots...

...while a trusty shepherd guards his flock in the spillway!

We ended up with a respectable (for mainly Starr County) 66 species for the day!  Bird list:


Pyrrhuloxia
Posted by Alamo Inn B and B Gear and Tours at 8:17 AM