Don (a “raptor man” from Novato, California) and his wife Mai-Liis (originally from Estonia) were looking for a relaxed half day of birding, hopefully to get some of the raptors they don’t get in California!  I originally gave them the option of joining a hawk watch or road-birding one of the ranch roads, and he chose road-birding (mainly because there had been a threat of rain today, and it was indeed misty and foggy to start with), but thankfully they had visited the Santa Ana Hawk Watch on their own and got almost all their targets, including Hook-billed and Swallow-tailed Kites!  (Kinda wished I had joined them… J)


I chose Wallace Road as that route has a good variety of habitat, and was relieved to see the thing was passable after the heavy rain we had had earlier in the week!  Besides the hordes of Redwings (with the occasional cowbird), we were pleased to see our first raptor fly up into a palm tree; I initially thought it was a White-tailed Hawk due to the wing pattern, but it turned out to be a subadult Swainson’s that practically let us sit right underneath it!  The usual wire birds started showing up (Mourning Doves, Mockingbirds, and Lark Sparrows), and at one intersection a Long-billed Thrasher sang from a wire!  A lineup of tiny little Lesser Goldfinches didn’t seem intimidated by the Kestrel sitting next to them, and a kingbird eventually made itself known as a Couch’s. 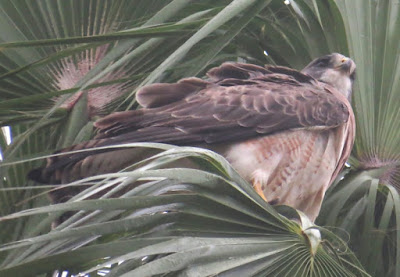 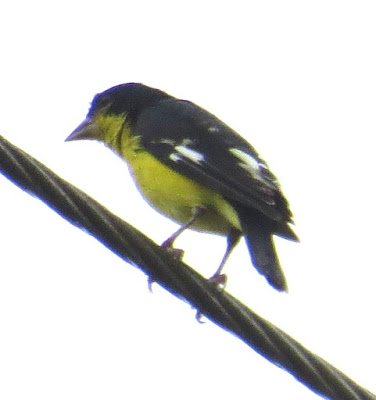 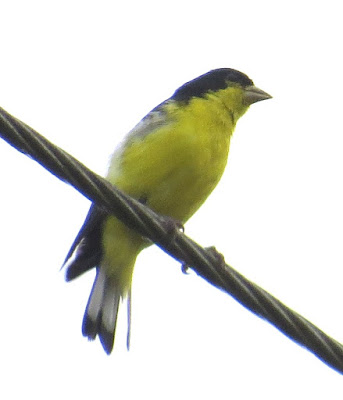 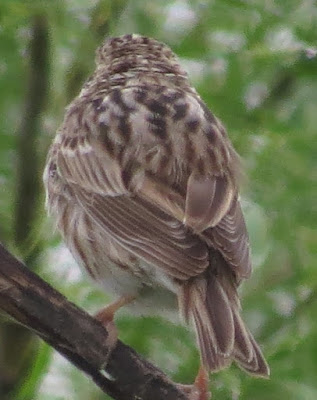 Quiz bird!  (Answer is starred in the bird list below...) 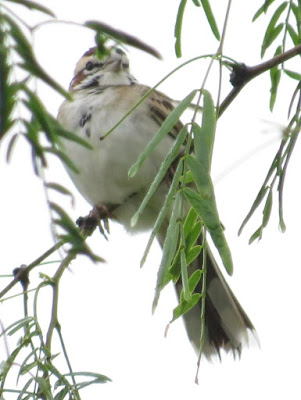 In one patch of thornscrub I was surprised to hear a Clay-colored Thrush calling, as I had never had it on this route before!  That, along with the Olive Sparrows, refused to come out, but a Lincoln’s Sparrow in a brushpile was a little more cooperative, along with a couple of Orange-crowned Warblers.  A Loggerhead Shrike posed on a wire (which led to conservations about vagrant Northern Shrikes in Solano County, California), and a couple of Green Herons circled around the road in front of us early on (probably visiting the old Monte Cristo Tract, as there’s still water back there).  A nice male Hooded Oriole sat in a “window” in a mesquite, and before long the Scissor-tailed Flycatchers started showing up!  Heard some Horned Larks calling in the fields along with one distant Upland Sandpiper, and at one point a nice Harrier glided by.  At another patch of thornscrub where I was trying to draw out a Verdin, a Roadrunner sang very close to the road!  He didn’t respond to being messed with, however (aside from continuing to coo…).  While all this was going on I suddenly noticed a Bobwhite walking down the road!  Thankfully Don was able to get a shot before he snuck into the foliage (as we continued on I happened to see the babies disappear in the rear-view mirror…)!  We were almost to the wetlands when I thought I heard some Chachalacas growling, so I got out, and sure enough, a pair started chorusing, and then another, and then another (interestingly, another new bird for this route)!  Some Tropical Kingbirds tittered as all this was going on, so Don and Mai-Liis got to hear both kingbirds!

The wetlands were great:  even before we got there, Don and Mai-Liis’ life Mottled Ducks were waddling across the road!  Both flavors of grebes were very noisy (I always get a kick out of the Leasts’ trumpeting sounds), and lots of Anhingas and cormorants were drying their wings.  There were tons of Coots, of course, along with several Common Gallinules and a few unseen Soras.  One hidden spot had a Blue-winged Teal that looked like it was transitioning into eclipse plumage, and a female Ring-necked Duck glided by.  Other ducks included several Ruddies (including one male in breeding plumage) and a couple of Shovelers, and I spooked a young Black-crowned Night Heron when I moved the car.  We eventually saw a beautiful adult, and a subadult Yellow-crowned was on a nearby tree!  Don and Mai-Liis spotted a flyover spoonbill that I missed, but thankfully it showed up down the road, along with a few young White Ibis and four White-faced Ibis flying in the distance.  A lone Harris’ Hawk looked rather sleepy, and in the more open wetland a pair of Forster’s Terns batted around while a Belted Kingfisher sat on a dead tree.  Don spotted a distant kettle that was comprised of mostly Swainson’s Hawks, but was too far away to discern anything else.  The willows had a singing Northern Parula along with a couple of chipping Yellow-rumped Warblers (a male Myrtle was especially sharp-looking) and some Orange-crowned.  The traffic was really nuts today:  not only were there a lot of farm workers going through, but these huge Mac Trucks were rumbling by and just barely had enough room to get by us!  One even pulled over in order to let us pass, as he evidently didn’t think there was room enough for the both of us, so we didn’t get to check out the last wetland as carefully as we would have liked…

A pair of Mottled Ducks waddle across Wallace... 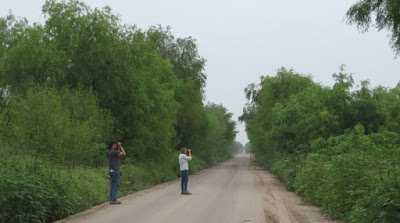 Don and Mai-Liis check out the wetland 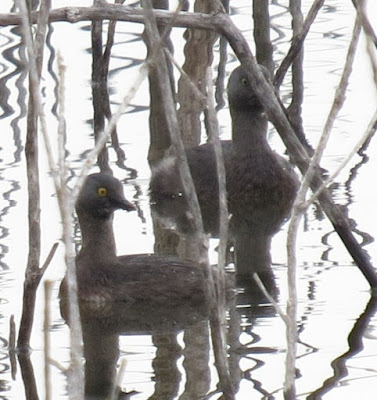 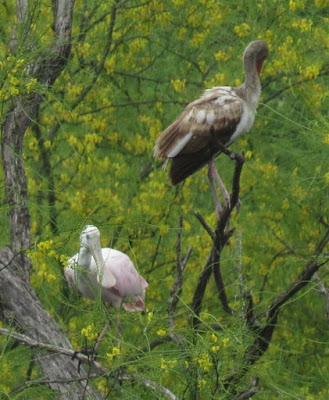 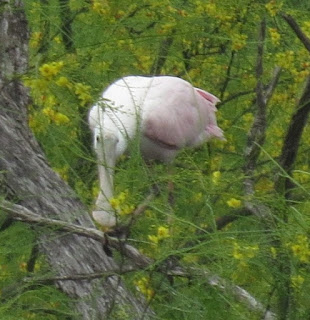 Close-up of the spoonbill 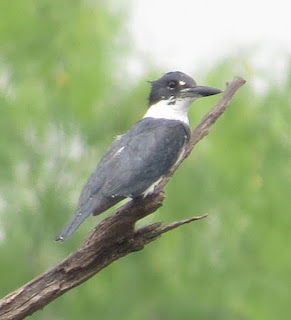 We had to get going after that, but we did stop for a couple of things:  I thought I heard an Indigo Bunting tentatively singing, and after playback something suspicious shot across the road to Don’s side, but what did pop up were a couple of Olive Sparrows chasing each other!  (Hope he got a picture! J)  A Wilson’s Warbler provided background music, but the bunting never reshowed (if that’s what it was…).  What I assumed was another Lesser Goldfinch was actually an American when it started talking, and we spooked a little Common Ground Dove off the wire.  We stopped for a kettle of both vultures and happened to hear White-tipped Doves calling from the scrub, and I thought we flushed one along the road as we barreled up to FM 490.


We headed home with 73 species for the official eBird list, but with additional species seen/heard both before and after (including the resident Black-bellied Whistling Ducks on the roof), the final list contained 79 species!  Bird list: