Kurt, Carice, and their 11-year-old son Parker had already explored many spots in south Texas (coming from Laredo and “bopping” around Cameron County), so by the time they got to Alamo there were only a handful of targets that they still needed!  Parker was the photographer, so he was always looking for that “better shot”, but they were game to chase rarities as well as their remaining targets, so we began the day at Quinta Mazatlan in hopes of the Crimson-collared Grosbeak.  Black-bellied Whistling Ducks greeted us at the entrance, and once we paid our fee we headed to the amphitheater area.  Gabriel (a local who was a frequent visitor to the area) had heard the bird that morning, but we gave it an hour, and this time she decided not to cooperate…  L  But the good news was that another one of their targets, the Clay-colored Thrush, played with us awhile and then came in to the feeders!  In the meantime we had great looks at the Chachalacas, both kinds of woodpeckers, Kiskadees, my FOS Chimney Swifts low overhead, and of course Redwings…  Before long the Chachalacas started chorusing, and we actually saw a pair leave the feeding area, make their way up a tree, and join the morning news team!  Another lady and her husband were there who had spent hours every day waiting for the grosbeak to come in, and she showed us where a McCall’s Screech Owl was hanging out, so that was a good one to put in the bank! 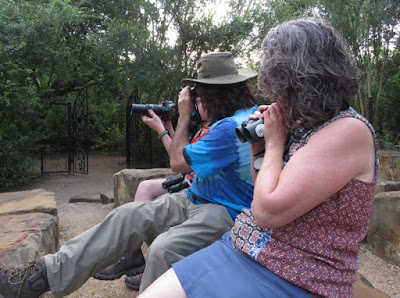 Parker, Kurt, and Carice try to zero in on their life Clay-colored Thrush (below)! 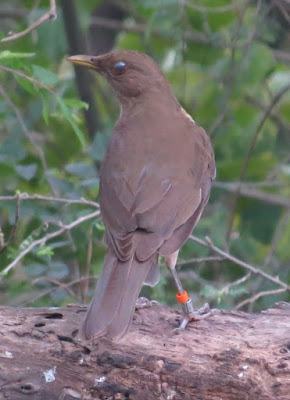 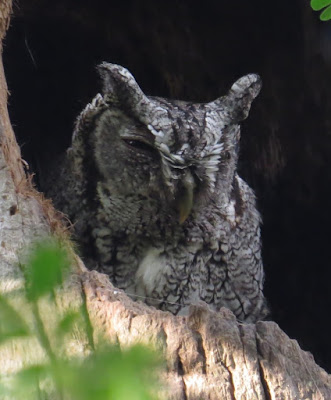 
We finally gave up and made the loop, hoping to at least hear the bird, but got a nice look at a Curve-billed Thrasher instead, and added both Inca and White-tipped Doves to the “heard-only” list.  Some Green Parakeets blasted over but we could never get on them…  Parker got a kick out of the statuary, especially the Jaguar hiding in the woods! J 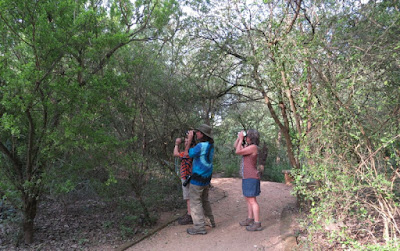 Exploring the trails at Quinta 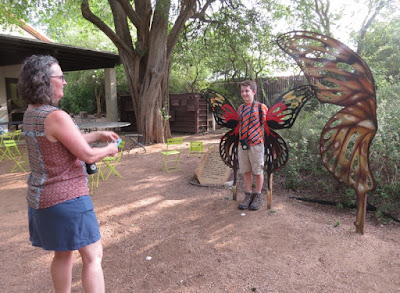 From there they agreed that even a remote chance at a Hook-billed Kite at the Bensten Hawk Watch might be worth trying, so we headed over, and after getting our bands one of the volunteers informed us that the tram was about to leave, so we hitched a ride!  But we had to switch trams at the Green Jay Blind (we almost lost Parker there J) as they needed our tram for a group that needed handicap-accessible, so another guy brought another tram, but it was almost full by the time he got to us!  So we squeezed in and then all bailed out at the Hawk Tower stop.  Everyone was impressed with the tower itself, and thankfully (depending on how you look at it) it was overcast with a nice cool wind blowing, although that sent the hawks up high and over, so we saw very few things close up.  We spent an hour up there, and “hundreds” of vultures and Broad-winged Hawks were logged by John and his crew (they were all specks to me L), but a few Swainson’s Hawks came close enough for good looks, and some White Pelicans were spotted so far away that I never could get on them!  Parker was having a ball adding birds to his “Mexican” list as so much of what we saw was actually beyond the Rio Grande (including a hovering Osprey), and we heard a distant Gray Hawk, but alas, would never see one…  However, a Caracara posed nicely on a tree! 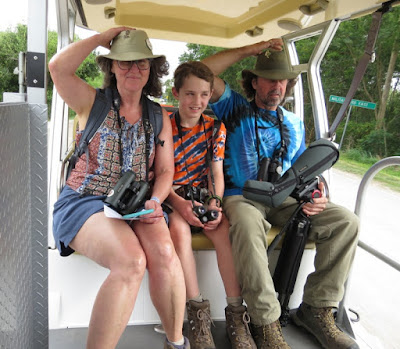 Catching the tram to the Hawk Tower! John Kaye looks to the skies while Kurt tries to get a photo with Parker's camera! 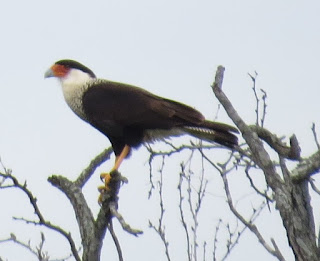 We decided to walk back and spent some time in the Kiskadee Blind, catching a Green Jay and the namesake Kiskadee, plus a Mourning Dove that came in to drink and two female Cardinals having a rout.  We trudged over to the Resaca to check for kingfishers but only found a couple of Pied-billed Grebes and both “Greg” and “Sneg” in the reeds.  We made it back to the parking lot between rest breaks, hearing a Beardless Tyrannulet on the way, but at the Nature Center feeders Kurt spotted a young Altamira Oriole in a Mexican Olive tree before it went shooting across, and a couple of Chachalacas stepped tentatively out from hiding.  Nothing was at the canal, so we dragged ourselves back to the car (I think Parker indulged in an ice cream bar about that time, and I was sure tempted…). 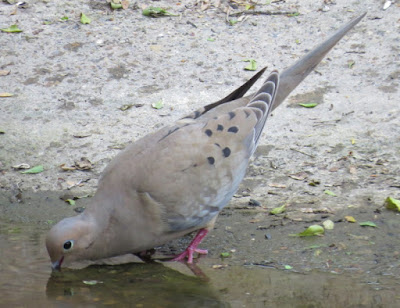 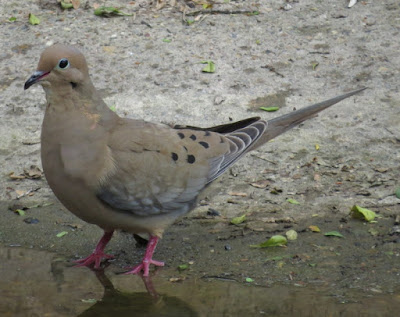 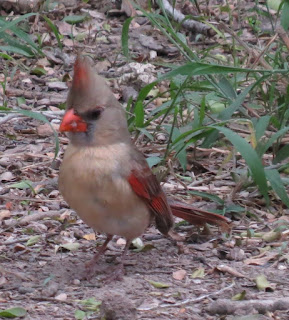 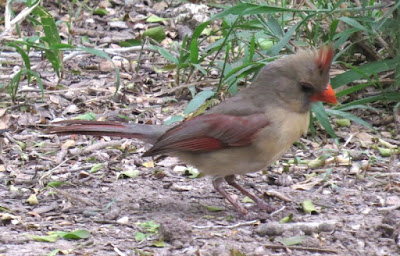 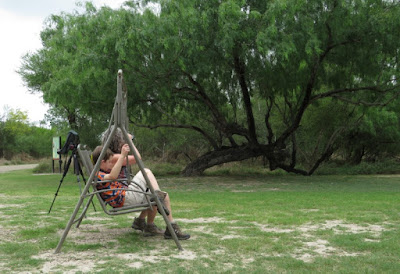 Carice and Parker taking a breather

We were all pretty beat by then, so we agreed that road-birding the rest of the day would be a good idea.  We zigged and zagged up to Wallace Road, where we added a whole new suite of birds:  Horned Larks were in the dirt fields, and Lesser Goldfinches were along the roadsides in the sunflowers.  We got great looks at both adult and immature White-tailed Hawks, but the best birding, of course, was up at the wetlands, which were full of water and birds:  we had a few lingering ducks (including a male Lesser Scaup), great looks at Least Grebes, a couple of flyover Greater Yellowlegs, and a young White Ibis across the way.  Anhingas were out the yin yang, and a few Neotropic Cormorants were close enough to see the shape of the gular pouch.  Tons of Coots were around, along with a few Common Gallinules and pretty Black-crowned Night Herons, and a Belted Kingfisher had us going for a minute…  But Parker spotted the best birds fly in:  a trio of Eared Grebes in breeding plumage!  That was astounding!  We heard a Sora and a Bewick’s Wren, the latter which didn’t want to show himself, but a Long-billed Thrasher showed well from the thornscrub, and Scissor-tailed Flycatchers were everywhere!  A few Lark Sparrows showed off as well.  It was along this road that Parker decided to start a “scope list” (i.e., birds seen through the scope), so he was trying to get that scope on everything we came across, which in the case of friendly Mockingbirds was pretty tough!  But a Mourning Dove was quite lovely, actually, with that yellow-green shimmer on the neck! 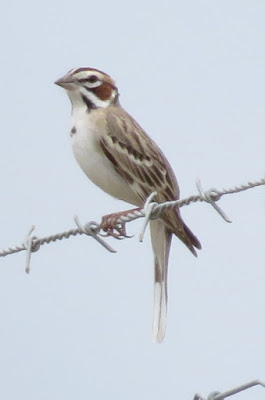 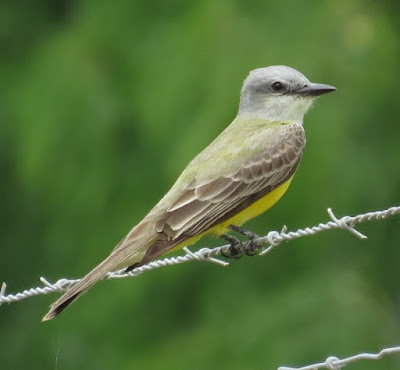 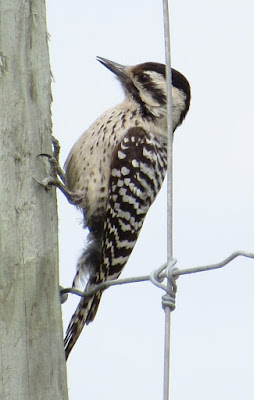 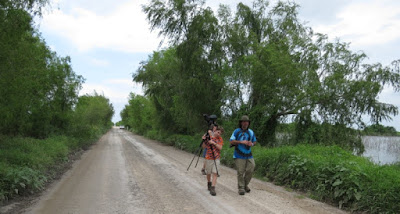 Checking out the wetlands along Wallace Road 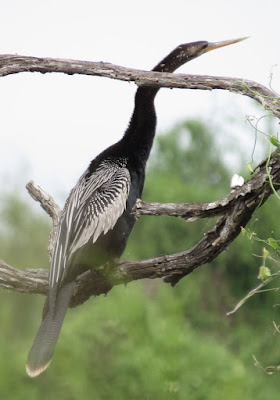 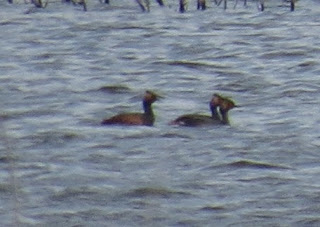 We still had a little time, so we poked up Laguna Seca Road, where a Pyrrhuloxia greeted us right away!  We heard distant Turkeys gobbling along with a Bobwhite, which we later flushed along the road!  An incongruous Osprey sailed past with a fish in his talons (as to my knowledge there are no bodies of water along that route where he could have gotten one)!  A Harris’ Hawk sat almost within touching distance at one point, but right about the time we had to scoot, a Roadrunner exploded from the side of the road and then started cooing at us (with a little prompting J)!  That was a great ending to the day! 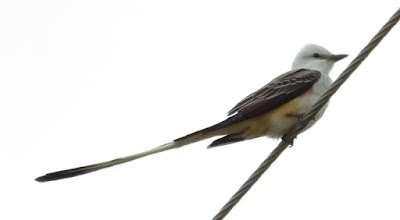 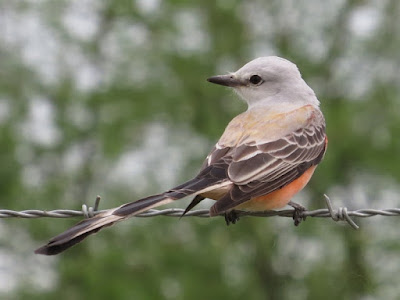 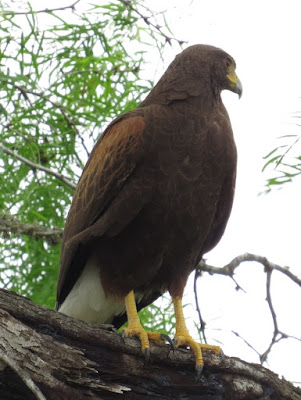 Carice was keeping the eBird lists (and I made a day list when I got home), so between the two of us we ended up with 93 species for the day!  Bird list: