Estero Never Disappoints - Even When the Weather Does!

What a difference a few days (and a change in the weather) makes:  last week had great migrant conditions where we managed to bag an incredible 90 species during one morning of birding at Estero Llano Grande, but today, with the horrendous south winds and high water in the ponds, we were doing well to manage 46! L  Dale and Suzanne from Oregon just wanted a half day of casual “best of” birding as he called it, so even with the challenging weather, Estero was the place to go!  But I’m not willing to abandon the slogan coined by Nydia from Texas Birding (“Estero Never Disappoints”), because even though the overall birding was pretty dismal compared to the previous week, we had wonderful looks at some of our special hard-to-see birds!


As far as my guests were concerned, things started off with a bang with a male Cardinal darting in front of us as we pulled into the parking lot!  (Ya gotta remember:  we west coast people don’t have Cardinals! J)  Starting right in the parking lot, I thought we had our resident Long-billed Thrasher singing from the wire against the light (as he always does), but once I got the scope on it, it turned out to be the Curve-billed Thrasher!  Heading in to the Tropical Zone, Dale’s sharp eyes spotted their first Clay-colored Thrush sitting ram-rod against a tree!  I was amazed (although he admitted he saw the thing fly up there… J)!  As we spotted two pairs of Golden-fronted Woodpeckers battling on a dead tree, some Chimney Swifts flew over, and about that time a volunteer named Donna came by with food for the feeders, which was a real blessing as I assumed that once the park hosts left for the summer, that was the end of the feeding!  The other blessing this Easter morning was one of the Red-crowned Parrots which alighted in another dead tree in beautiful morning light!  Also high up in the treetops were the Chachalacas, starting the spreading of the Morning News, and Suzanne noticed how red their malar skin became when they chorused! 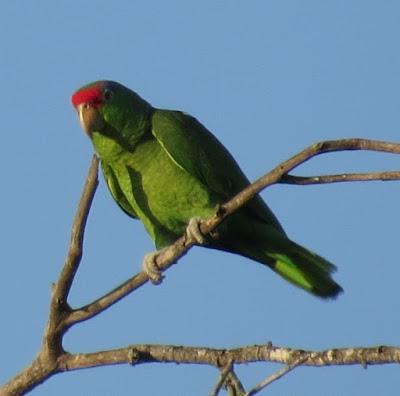 Chachalacas giving the traditional Easter greeting in their own tongue! J

We eventually made our way down to the open feeders, and ended up spending about 15 minutes there as the place was hopping:  White-tipped Doves were all over the floor, and Green Jays, more Goldenfronts, and Black-crested Titmice raided the cage feeder.  I got a glimpse of a Long-billed Thrasher zipping into the undergrowth, and Suzanne caught two of them zipping back and forth like “ghosts”, so fast that she couldn’t see any detail!  I said that was typical… J  A Buff-bellied Hummingbird snuck in to feed at the feeder right next to us, as did a brilliant male Ruby-throated Hummer, but unfortunately Dale couldn’t get on him… L  But the real highlight was the normally skulky Olive Sparrows coming right out in the open to feed, just like any other sparrow!  From behind us a Blue-headed Vireo was singing his sweet song. 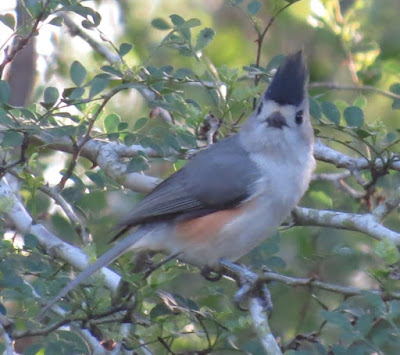 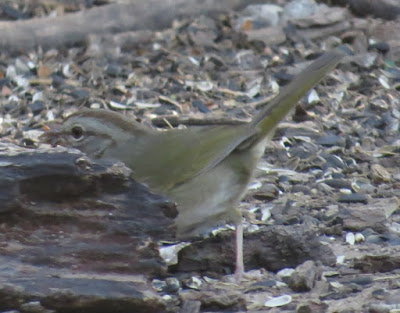 We didn’t spend much time at the drip due to the angle of the sun, so we decided to spend time in the Indigo Blind to see if the Rubythroat would come in there (plus someone had seen a Blue-winged Warbler there the day before).  The White-tipped Doves were marching in like a line of soldiers, only to be challenged by the White-winged Doves who constantly flipped their wings and tails at them!  Once the Fox Squirrel vacated the cage feeder the doves and jays got into the act, and a pair of Brown-crested Flycatchers made a lot of noise in the trees, but never showed themselves.  Eventually, however, the male Rubythroat did come in, although he tended to stay in the tree next to the feeder!  But at least Dale got a good look, so I was happy about that! 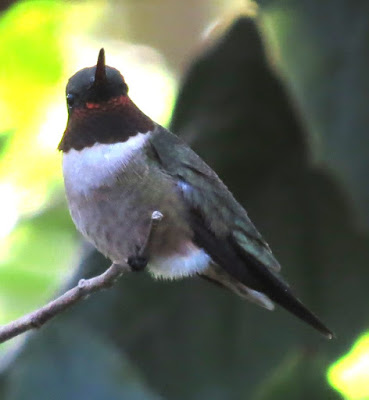 Ruby-throated Hummingbird in the shadows 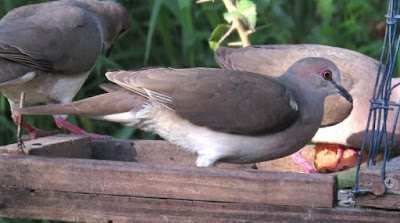 White-winged Dove showing his annoyance at the other doves...


We circled around and enjoyed a Kiskadee, but nothing much else due to the wind.  At the Green Jay Trail (where the Cerulean Warbler was spotted the previous afternoon) I once again ran into Huck, another friend of his, and Mary G. who was chilling in her fold-out chair waiting to see what would come by!  Not surprisingly, nothing was showing, so Mary agreed to guard my scope while we hiked the trail.  At least two different Carolina Wrens sang very close to the trail but never showed themselves, and when we casually mentioned our frustration to a passing photographer, he told us where he had found them nesting, so after retrieving my scope (Mary said it only tried to run away twice J) we headed to the spot and got wonderful looks at yet another notorious skulker! 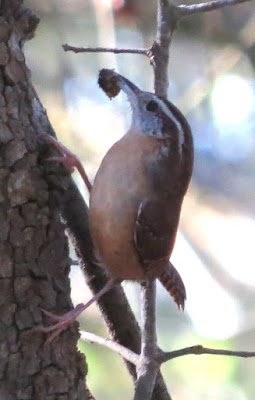 Carolina Wren with lunch for the kids...

We finally made our way to the deck where the wind and high water had effectively removed any birds that had been there the week before (there were several Black-bellied Whistling Ducks, mostly on the shore, but that was about it); even the normally omnipresent stilts had vamoosed the joint!  Unfortunately while Suzanne and Dale were preoccupied elsewhere two young White Ibis flew in and circled several times, but decided not to hang around…  So once we were checked in we quickly checked out the pond from the boardwalk (better light) where a Marsh Wren sang his rickety-rack song and Dale spotted an Osprey flying overhead!  From there we fought the gale out to Dowitcher Pond (nada, except for a lone Mottled Duck way out there), but at the relative shelter of Grebe Marsh we had a little pod of Least Sandpipers on the shore and a lone Great Egret looking for lunch.  At Alligator Lake the night herons had been replaced by a couple of Green Herons, but unfortunately I could find neither hide nor feather of either Pauraque that usually hangs out in the area (and with them breeding, I really didn’t expect them to be easily found).  Nothing was on the deck, so we headed back to the VC, but not before another couple spotted Big Mama Gator gliding through the water!  We all got a great look before she decided to slowly submerge… 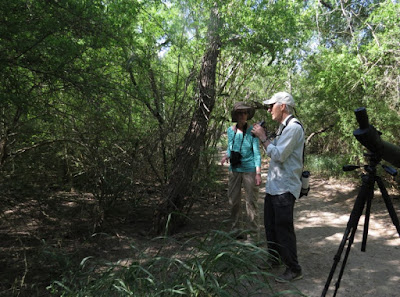 Suzanne and Dale search in vain for the Pauraque...

The walk back was filled with conversation about various tropical trips and lodges (plus a few Rough-winged Swallows), and once back to the deck we listened in on Ranger John’s recap of the bird walk he had just finished with some folks; they did indeed find the Pauraque, but they had all but given up until someone with sharp eyes spotted it way back there, tail on!  That would have been nearly impossible to find!  While we chilled we added a lovely Harris’ Hawk that flew by, plus a Spotted Sandpiper bobbing on a log.  After comparing our eBird lists, we headed back to the car, where we heard an Altamira Oriole calling that (like so much stuff today) was hidden deep in the tree, so we wrote that one off as a “heard-only” as well.  We were glad to get into the air-conditioned car!