Had a last-minute request from a trio of brothers for some guiding services, as this was their first time to the Valley (originally from Wisconsin but now spanning Idaho, New Mexico, and Missouri), so since I only had a half day to spare we went to Estero Llano Grande State Park, which “never disappoints”!  It sure lived up to its reputation this morning, as we ended four hours of birding with an incredible 90 species!


The dreaded wind never really materialized, and it was an absolutely gorgeous, crisp, sunny morning as we started in the Tropical Zone with a bang, zeroing in on a Clay-colored Thrush in the camp host area (now devoid of camp hosts)!  A Tropical Kingbird teed up on a tree and tittered amidst all the Couch’s Kingbirds sneezing away, and a very nice little cadre of migrants had us distracted for a good while:  no less than three Blue-headed Vireos were song-battling, and others busily feeding included Nashville and Tennessee Warblers, a single Black-throated Green, and my personal favorite, a Red-eyed Vireo for the year!  A Ruby-crowned Kinglet chattered and joined the fray as well.  Ranger Javier spotted us and told us about a Harris’ Hawk that was showing well, so after we finished with the feeding flock we continued on and found the hawk, just posing and stretching in perfect light!  (Kept watching for those Swallow-tailed Kites Estero was always reporting… L)  What I thought was a House Sparrow flying up to the wire was actually a changing Indigo Bunting! 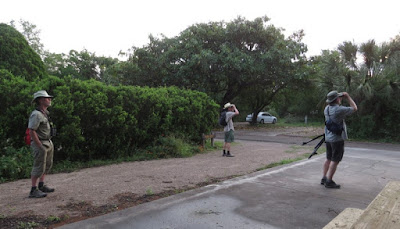 The guys zero in on their life Clay-colored Thrush (below)! 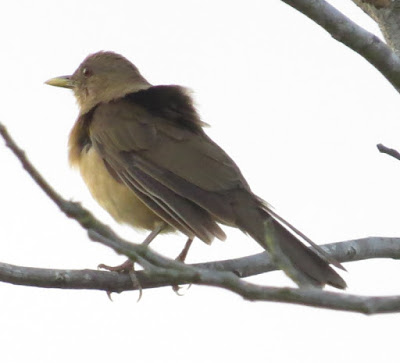 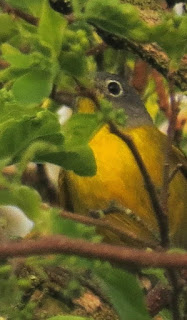 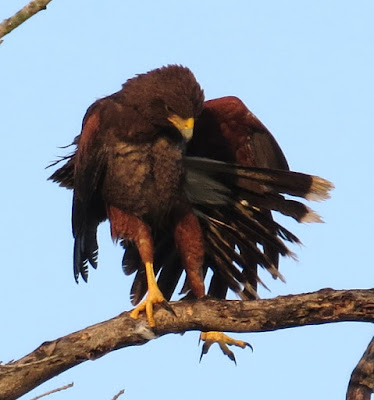 Harris' Hawk posing for the camera... 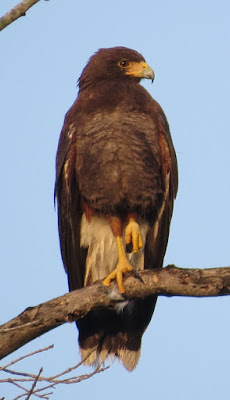 I kept hearing a Brown-crested Flycatcher but we could never pin him down; we did have a Myiarchus in view but in lousy light, and since its tertial edgings were so bright I really couldn’t rule out Great Crested (which we did hear “wheeping” back at Alligator Lake).  Although the feeders were no longer being stocked, a couple of White-tipped Doves were still patrolling the floor, and we could hear the Chachalacas sounding off in the distance (and saw some as we returned to the main park).  The drip was pretty slow, so after greeting Rangers Raul and Hector, we sat at the Indigo Blind for a while, where a Green Jay was stuffing his face at the feeders until a couple of White-tipped Doves ran him off!  Several Cedar Waxwings were in the trees outside the blind, and heading back we got great looks at both Golden-fronted and Ladder-backed Woodpeckers in the same dead tree.  We heard a Buff-bellied Hummingbird rattling at one of the flowering trees, but John was the only one to get a good look at it… L  We heard a couple of Green Parakeets screeching over, and later had a single (silent!) Red-crowned Parrot fluttering and circling overhead as if checking us out!  On the way out a Curve-billed Thrasher bounced along the road while a Long-billed sang right above him in the tree; made me think of that funky hybrid thrasher that we have there! 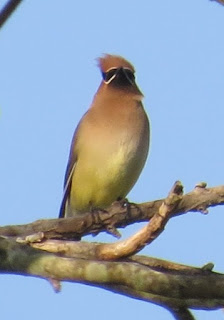 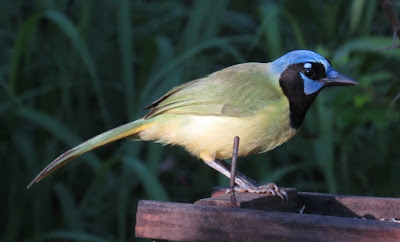 This Green Jay was minding his own business until shoved away by a White-tipped Dove (below)! 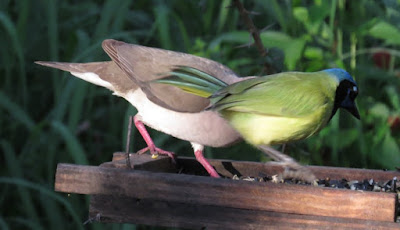 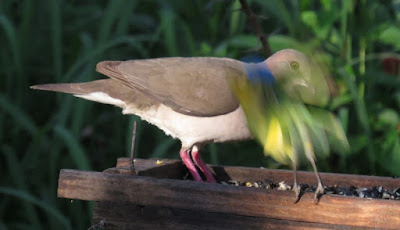 After checking in we checked out Ibis Pond, which was stuffed with shorebirds:  mostly Long-billed Dowitchers, Stilt Sandpipers, and Least Sandpipers, but the resident Black-necked Stilts were also there, along with a single Pectoral and a couple of Lesser Yellowlegs.  We sat at the hummer feeder for awhile hoping the hummer (or the reported Painted Bunting) would come in, but they didn’t, so we continued on, enjoying the Purple Martins sharing their apartment building with the House Sparrows!  On the boardwalk we had both a Lincoln’s and Clay-colored Sparrow feeding in the mud, and at Dowitcher Pond we added a pair of Fulvous Whistling Ducks in with the plentiful Black-bellied!  At Grebe Marsh someone (I think it was Tom) spotted a Solitary Sandpiper, and a couple of young White Ibis sat and preened.  An adult and subadult Yellow-crowned Night Heron showed at Alligator Lake, followed by a rocking Northern Harrier, and while we couldn’t find the “traditional” Pauraque, another couple staying with us at the Inn, Ian and Julie, spotted the “backup” that’s often sitting at the foot of the entrance to the big deck!  So we were all very pleased to see that guy!  A Yellow-breasted Chat was tentatively singing while all this was going on, and a quick look on deck added a trio of Green Herons.  Heading out we caught Ian and Julie zeroed in on something in the tree, which turned out to be the Cardinal we had heard singing previously (which are always exciting to our British visitors J)! 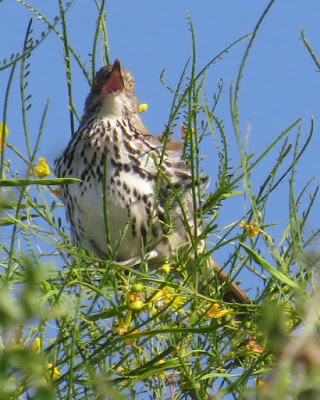 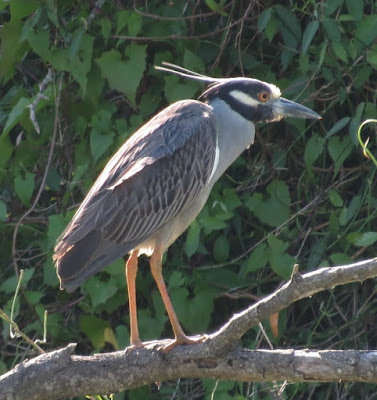 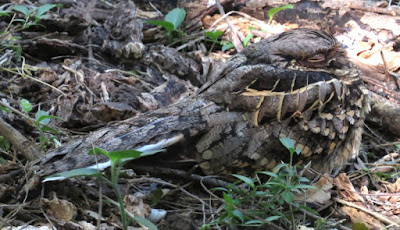 Aphids on an airplant

Another calling Brown-crested Flycatcher got us briefly back into the Camino del Aves Trail, but he flew before we could get a good look.  Returning to Dowitcher Pond, we went the long way in order to get a better look at the Fulvous Whistling Ducks, and in the process saw the Spotted Sandpiper well into getting his spots!  A fracas between several Black-necked Stilts was fun to watch (one was actually pulling on another’s tail), and up on the levee we added a Scissor-tailed Flycatcher, a couple of Common Ground Doves, some avocets, and a pair of caracaras making more caracaras, but never spotted the White-tailed Kite pair that was hanging out there. 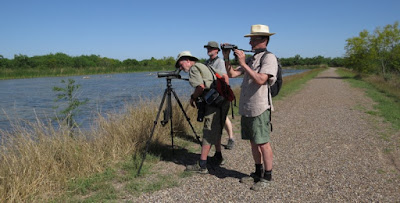 The guys enjoying the birds at Dowitcher Pond 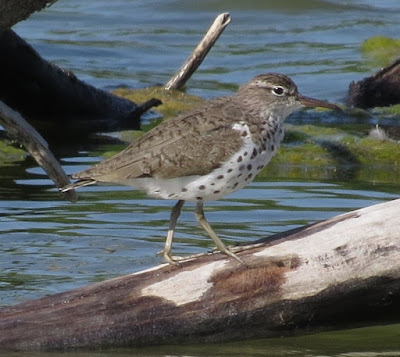 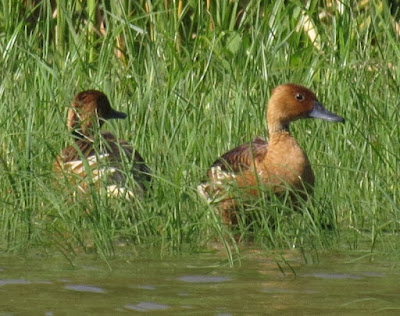 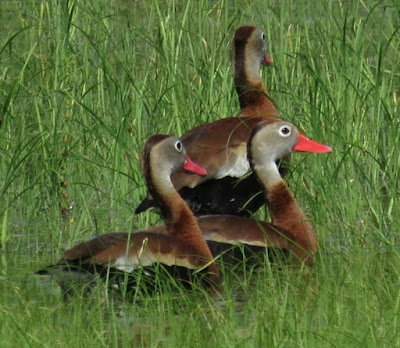 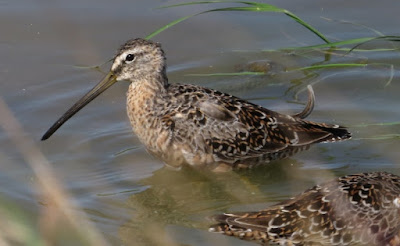 We finished the loop, getting more photo ops of the shorebirds, before chilling at the hummer feeder again before it was time to go.  An Inca Dove fluttered in, one of the guys spotted a soaring Swainson’s Hawk, and while I only heard an Orchard Oriole, the Hooded Oriole pair made an appearance! 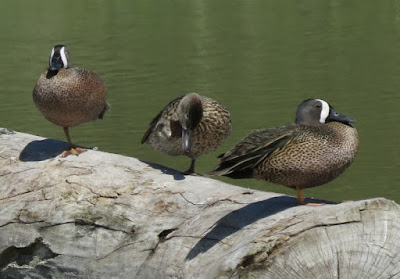 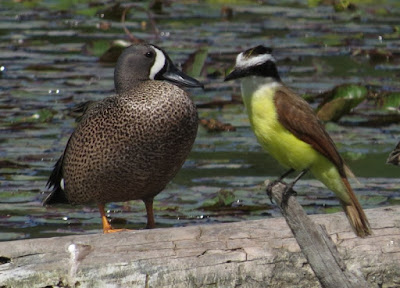 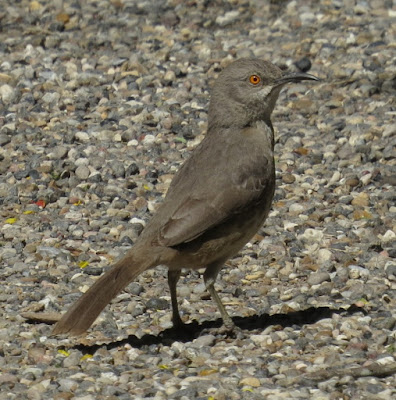 It was time to head home (after grabbing an ice cream and razzing Ranger John about not tying down a Swallow-tailed Kite for us J), very pleased with such a fabulous morning!  Bird list: