And what a glorious day it was!  Still was bitterly cold first thing (freeze warning was still in effect), but the sun came out and energized the birds!  We decided to start along the Old Military Highway levee, first checking the wires along Business 83 in hopes of Green Parakeets, but they had found another resting place.  So starting at the east end of the accessible levee, we headed west with the sun to our backs, and after logging the requisite columbids around the residential areas, we came upon a very birdy spot that had both Couch’s and Tropical Kingbirds vocalizing, Lincoln’s Sparrows popping, and a cooperative Olive Sparrow that sat right up and sang for us!  A little further down the road we had knockout looks at a young White-tailed Hawk, along with a juvie Redtail!  The gang dutifully oohed and ahhed at the Rio Grande right there next to us!  As we passed the Butterfly Center a gorgeous Peregrine Falcon posed on a power pole! 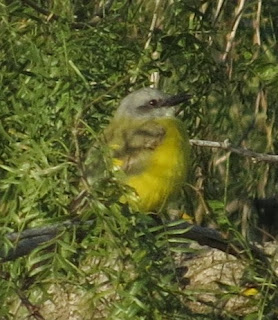 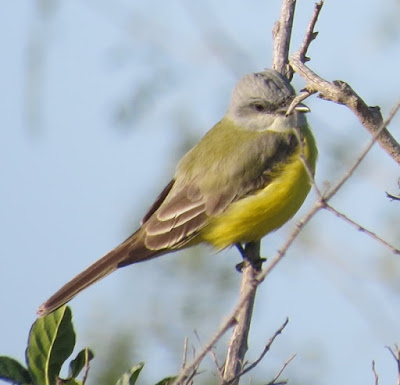 The identical (except for voice) Tropical Kingbird 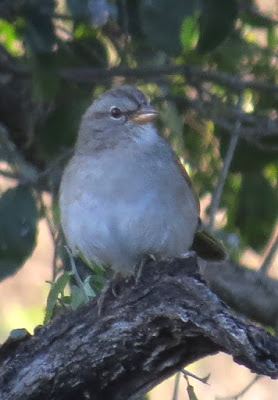 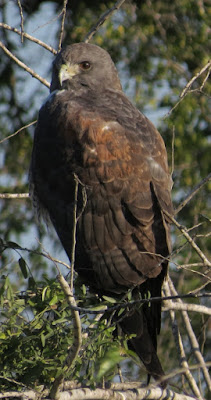 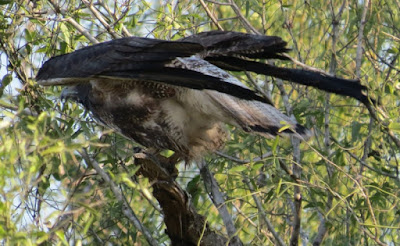 Showing off the white tail and the still-immature underparts 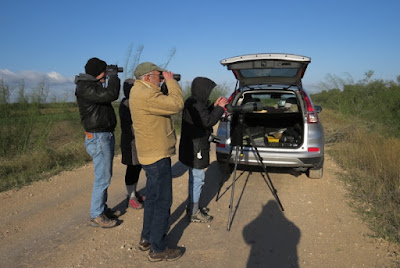 The gang enjoying the hawk

The restrooms at Bentsen State Park beckoned us, so since we were there we decided to check the Gatehouse Feeders, picking up a cooperative Buff-bellied Hummer at the feeder by the tram stop.  We checked the canal, and I had just finished telling the gang how once a Ringed Kingfisher had barreled right down the canal at us, when guess what!  I caught sight of one in the distance that banked, and here he came, right down the middle of the canal and over our heads!  What a show!  The feeder birds were almost anticlimactic after that, but we enjoyed Chachalacas fighting over the peanut butter, knockout Altamira Orioles doing the same (Kathie and Dale said they couldn’t not look at them!), Green Jays galore, and the best bird, a Long-billed Thrasher that gave extended views for Fran, as she had missed the one at Salineño!  A pair of Coyotes were the mammalian highlight, and White-tipped and Mourning Doves gave good comparative views.  A Verdin chirped on the way out but wouldn’t show, but back at the canal the Black Phoebe showed nicely.  Kathie was very excited about the Cattle Egret on the bank until she realized she had already seen one… J 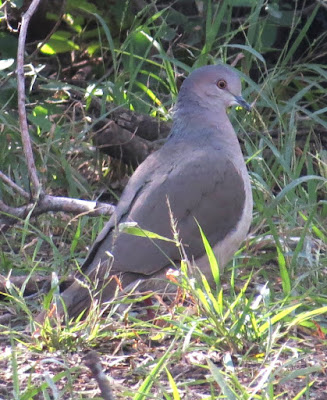 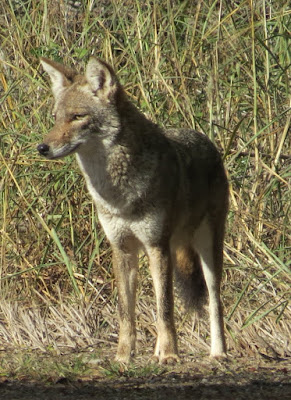 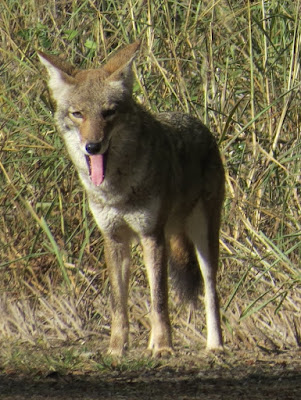 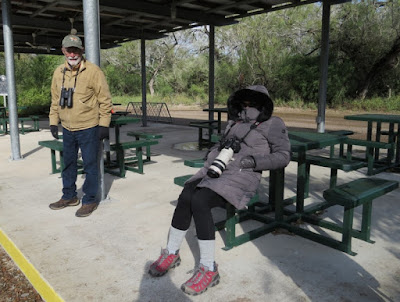 Yes, it was cold! 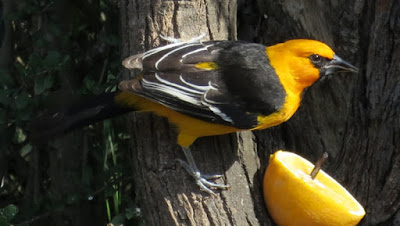 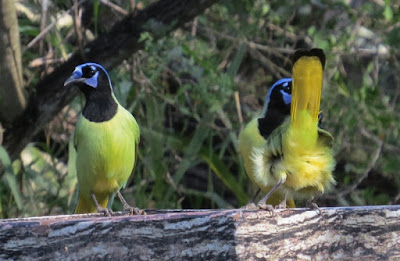 Green Jay with an attitude... 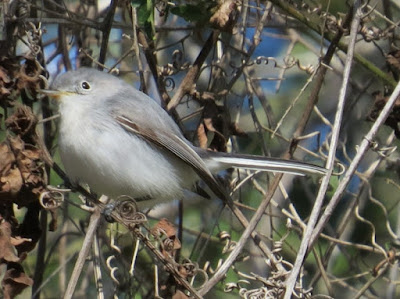 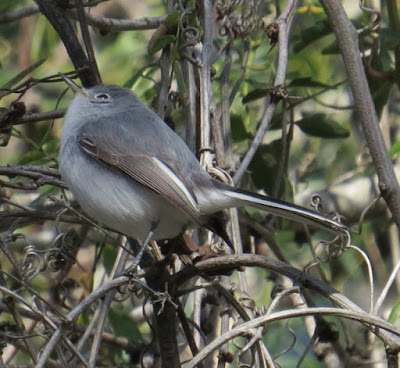 From there we headed to Anzalduas, and again I guess we lingered a little too long along the spillway, even though I made sure no one got out (their life Least Grebes and Mottled Ducks were there, along with a pair of White-fronted Geese), as the Constable once against chastised us!  After the Pipit Poke I went over and again apologized to him, and we actually had a great chat – he clarified that a quick look is okay, but don’t linger, because if a BP agent comes through in pursuit, you could get hurt!  He also enlightened me as to why the park is sometimes closed on “non-holidays” as it was last week:  if there’s criminal activity going on across the river, they’ll close the park for public safety reasons – makes perfect sense!


Anyway, we parked, and although the wind was nippy, Dale, Kathie, and I opted to take the Pipit Poke across the field, which was thankfully dry!  On the way out there a nice Red-shouldered Hawk powered by, followed by a Red-tailed Hawk that started soaring overhead!  We didn’t have to go far before we flushed a Sprague’s, but as per usual, it wouldn’t land where you could get a scope view (as Dale quipped, “He knows what he’s doing!” J)!  We wandered over to the edge of the river to check out the scaup mass and flushed a snipe in the process!  I was surprised that there were no Western Meadowlarks out there!

Kathie wills a Sprague's Pipit to show itself...

After we got back to the cars we continued on, and didn’t have to go far before the other pipit, the American, was bathing right in front of us; in fact, a whole flock of about 20 birds took off, wheeled around several times, and then settled down for scope views!  I heard a “chink” warbler, so we wandered over into the grove, and while we couldn’t find what I suspected was a Black-throated Green, we had several Orange-crowned and Butterbutts, along with a group of Eastern Bluebirds!  Swallows were swooping all around us at eye level, almost running into us at times, so we eventually all got great looks at both Cave and Rough-winged!  Continuing on we saw a pair of Caracaras, and pulling onto another road Fran was able to get some pictures, while I heard a Pine Siskin shoot overhead (but never found)!  After enjoying them we made the rounds and picked up a couple of Vermilion Flycatchers and the House Finches on that “central” road.  On the way out the caracaras were fighting over a fish, so the gang enjoyed watching that! 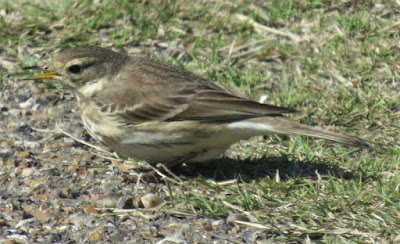 From there we really had to scoot to Estero, so after a requisite stop at Starbucks (nearly had a coup on my hands when I suggested Stripes instead J), we wheeled in and headed straight to the deck, but not before I heard a Clay-colored Thrush “ringing” that of course didn’t want to come out (a White-eyed Vireo was more cooperative)!  Ibis Pond had a few of the regulars, including an incredible White Pelican Ballet in the distance, but no Least Grebe or Mottled Duck, which Fran never saw at Anzalduas because we had to scoot…  So we headed toward Alligator Lake, making a stop at Dowitcher Pond, where finally a Least Grebe materialized within a group of Gadwall!  He was so cute!  Some Pintail were in with the other ducks as well, but Grebe Marsh was the real jackpot, with the sun beautifully highlighting Green-winged Teal, American Wigeon, Shoveler, and Gadwall, but a nice Spotted Sandpiper as well (Fran missed the one at Salineño, so this was a major celebration)!  At the turnoff to Alligator Lake another couple with a gorgeous English Setter had spotted the coveted Anhinga (along with a clueless Yellow-crowned Night Heron in plain sight), and then they pointed out the Pauraque, which dutifully blew away the crew with its cryptic plumage!  I then heard the Green Kingfisher, so going back to the heron spot I found her in front of the Anhinga, so everyone got great looks (and also at a Black-crowned Night Heron across the way)! 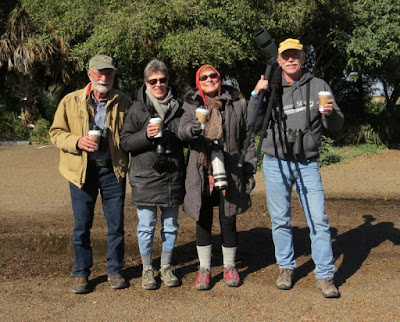 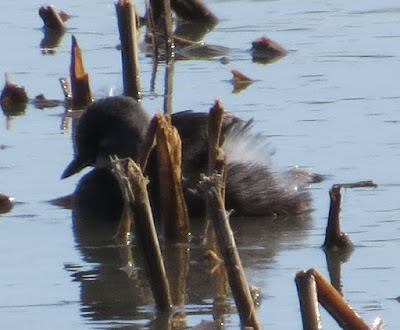 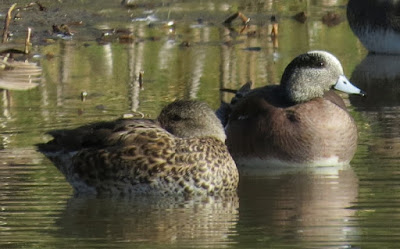 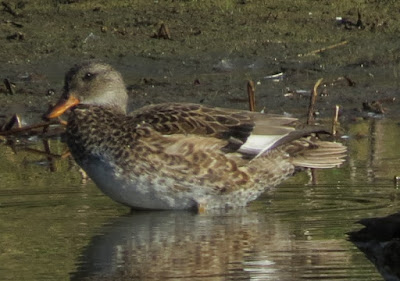 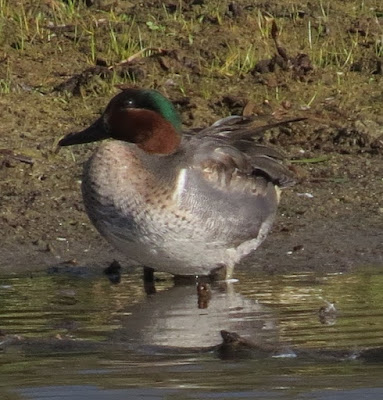 Front and back views of a Yellow-crowned Night Heron 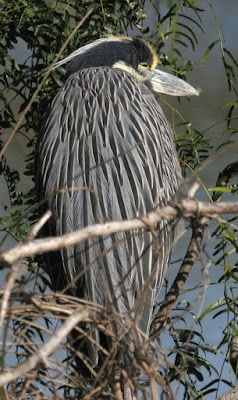 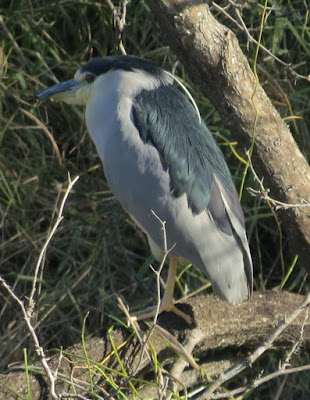 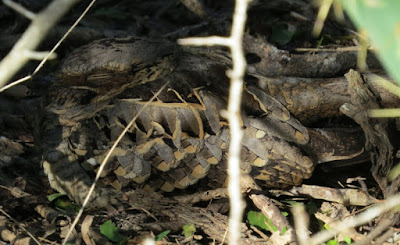 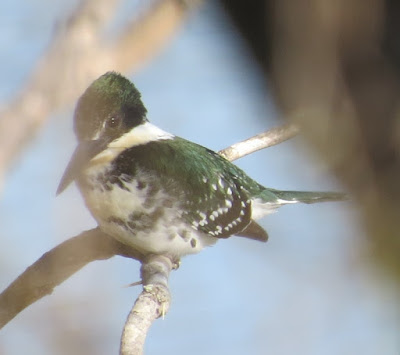 Lady Green Kingfisher through the foliage 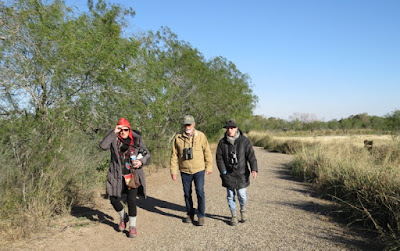 Trudging back to the deck

It was time to head home after that, but we took another quick look at Ibis Pond, spotting another Snipe across the way!  I pointed them towards the Tropical Zone when we got there so they could explore on their own, while I headed back to Alamo.  We had managed 84 species for the day!  Bird List: