Robert and Denise were return visitors, with rarities being the main targets.  The last time they were here we had gone on a Wild Plover Chase near Rio Hondo, and when I announced that they had shown up again and that we bagged them the day before, he was still dubious, but agreed to give it a shot.  He opted to drive (they also had a rented Forrester), and when we arrived at the spot, we saw another birder there (a guy I had met before named Mark) just waiting for the birds to show up!  The weather was a little more tolerable than the day before, so we pulled out the scopes and started scanning, and it didn’t take long for Robert to find one!  Unfortunately they were waaay across the field, and would ethereally fade in and out of sight as they moved amongst the clumps, so unfortunately Denise wasn’t able to get a good view.  The Gull-billed Terns flew by at least, and Denise spotted some Sandhill Cranes flying overhead while a small group of Snow Geese sailed in.  By the time another birder showed up we were ready to finally move on. 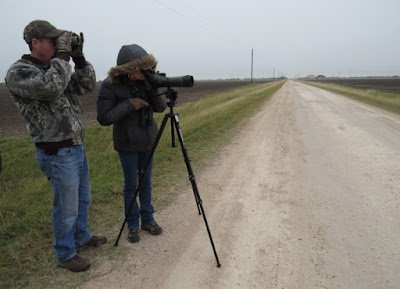 They were game to try for the falcon (even though I warned them that we dipped yesterday), so we hit the south end of Old Port Isabel Road next, where the biggest show was a huge flock of Long-billed Curlews!  A pretty little Vermilion Flycatcher made a showing as well, but alas, no falcon.  We turned around at the same spot (the security guy didn’t even bother getting out this time), but just as we got to the end of the road a Roseate Spoonbill flew overhead!


We headed down to the Dump, again warning them that the crow was a no show, but since this was Robert’s main target, we decided to give it a shot.  Since it wasn’t as wet as the day before, we decided to hike the ridge that Josh and I had done previously, and there in the mass of gulls in the ponds was a bona fide Lesser Black-backed Gull!  That was a great look!  Denise got a kick out of the fact that every post down below had its own Turkey Vulture, plus a couple of White-tailed Hawks to boot!  Robert found a Red-tailed Hawk “hidden in plain sight,” as he was sitting on a stump with his back to us, making him look like an extension of the stump!  Again, no raven, but on the way back to the car the gulls suddenly all lifted up in a huge mass, and Robert found the Peregrine who was undoubtedly the culprit!  Denise thought she heard a Sandhill Crane, and we finally spotted it way up in the sky! 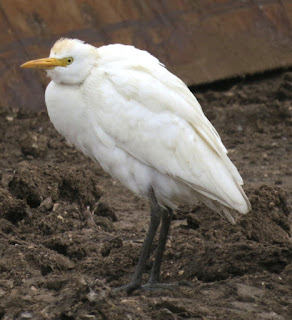 One of several Cattle Egrets not afraid to get their immaculate plumage dirty at the Dump...

Boca Chica was a bust regarding the falcon (we only went as far as the hacking station), but Robert deigned to take a quick detour to the Highway 48 Boat Ramp, although it wasn’t as quick as planned as I told him to go “straight” thinking that we were already on 511 (I was doing the eBird entry), only we were still on Boca Chica, and I didn’t realize things were amiss until we passed the airport! L  But we were able to scoot north and get on 48 quickly enough, picking up a nice White-tailed Kite on the way.  There was a nice collection of birds at the ramp (skimmers, oystercatchers, and plovers), but not his coveted Sandwich Tern.  Sadly, a sea turtle of some kind was dead on the shore; from our angle it looked like part of the shell was damaged, but I have no idea if he was a victim of foul play or if he died naturally.  (At least that's what I thought until I heard from Justin LeClaire that in this cold weather, many of the sea turtles were suffering from "cold shock" that caused them to float and beach themselves in various places!  So hopefully he recovered...) 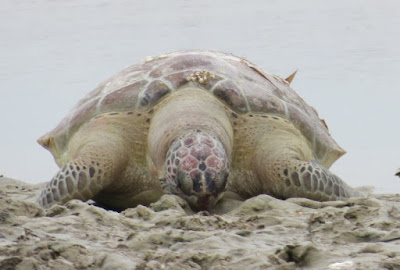 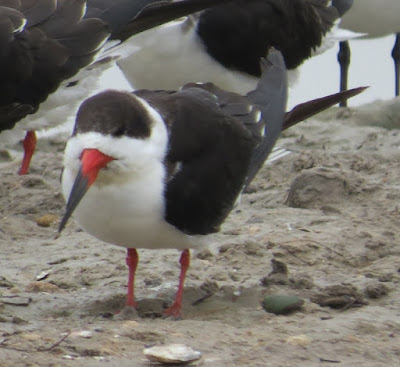 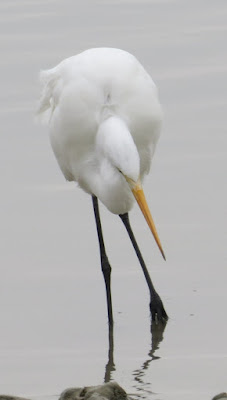 Robert really wanted to try for the Sprague’s Pipit at Anzalduas, so we headed straight over there, picking up some lovely White Pelicans along 48.  Before getting there we made a brief stop at Granjeño, seeing as Burrowing Owl would have been a life bird for Denise, and miraculously Robert found one down in the rocks!  That was to be the highlight of that area, however, as we were shocked to discover that Anzalduas was closed (and it wasn’t even New Year’s Eve)!!  I found out later that they opt to close the park if they deem that "activity" on the other side of the river is a threat to public safety...  On the way out we had a nice young Harrier that was perched, so it wasn’t all for naught… 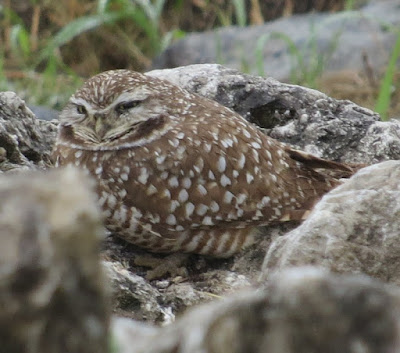 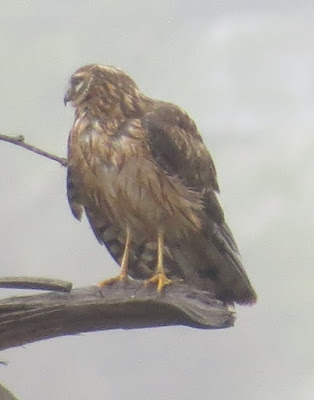 Not an owl, but the facial disk of the Northern Harrier makes it look like one! 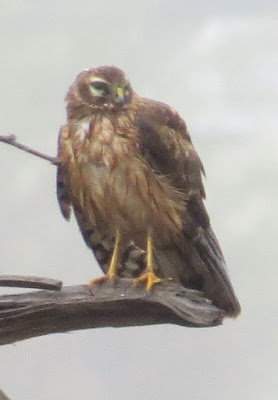 Monk Parakeets were new, so we swung by Hidalgo to check them off the list, only I was starting to sweat that, too:  we checked every nest and there were no parakeets!  After making the full rounds we decided to go back down Gardenia again, and suddenly there they were on the wire when they weren’t there literally minutes before!  Great looks!  Robert razzed me when I jumped out of the car to photograph a House Finch because I knew eBird was gonna flag it… J 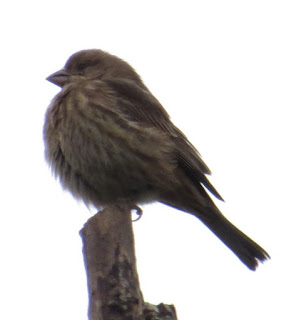 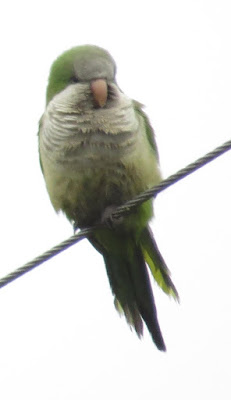 
They were curious about Quinta Mazatlan, so since that was on the way (and would provide some shelter from the weather), we headed there, and it was a great decision:  we had lots of feeding flocks including several Black-throated Green and Wilson’s Warblers, and in the Ebony Grove we had Chipping Sparrows and both “Myrtle” and “Audubon’s” Warblers, along with a Curve-billed Thrasher with a hurt foot at the feeders.  I showed them where the famous Mango had been hanging out, and along the back trail Robert spotted a feral Muscovy Duck out on the golf course!  As we dumped out on the entrance road, another feeding flock came overhead that included a Black-throated Gray Warbler!  That was even a lifer for Robert! 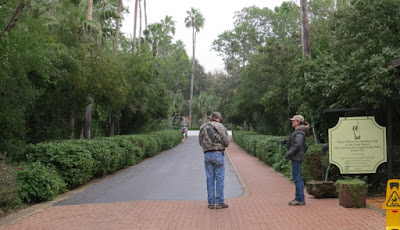 Robert and Denise get ready for Quinta Mazatlán! 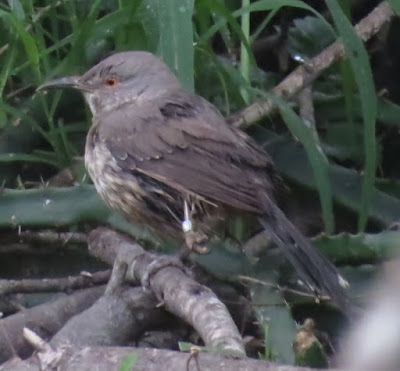 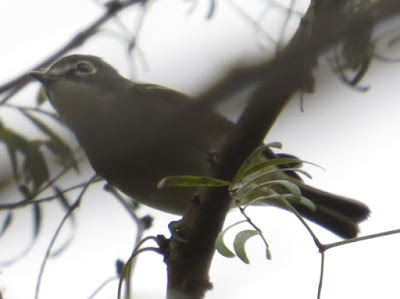 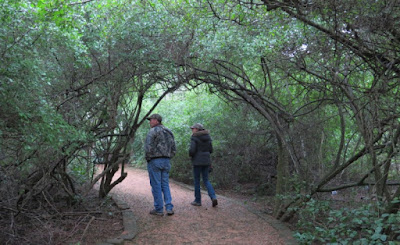 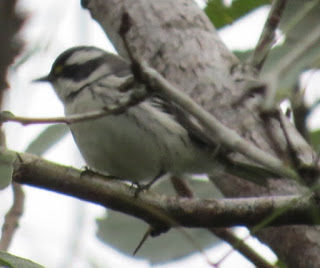 Despite the weather we ended up with a respectable 84 species for the day!  Bird List: