It's Not Supposed to Be This Cold!!!

Met Tom and Nancy at the Inn (as they were staying elsewhere) for their first birding day in the Valley, which I warned was gonna be cold by our normal standards!  (In response Tom sent me a photo of the blizzard that was happening outside their house in Illinois at the moment… J)  But thankfully the rain threat lifted a bit, and we headed out to Estero Llano Grande to do the “short walk,” enough to bag the Pauraque and Screech Owl out at Alligator Lake and then run back!  They were the type who just enjoyed seeing birds, no matter what they were (although new ones were always fun J), and right away the ice was broken when this all black icterid hopped up on a branch next to the brick walkway, and thinking it was a Bronzed Cowbird I kept trying to get decent looks as it would alternately hide and come out, but it didn’t have a red eye, and the bill looked too thin, and I thought, “Holy smokes – we don’t have a Shiny Cowbird on our hands, do we??”  About that time it decided to show just a tiny bit of red, so we all had a good laugh at our “rare” Red-winged Blackbird!  What was truly rare was the continuing Winter Wren that gave its deep chuck from the bushes (but wouldn’t come out, of course), but three Chachalacas posed nicely for us along the path that leads to the water feature, and several Inca Doves exploded near the corner tray feeder that was housing a Fox Squirrel!  A Wilson’s Warbler chepped unseen as well, and we had a nice view of a Black-crested Titmouse.


Thankfully the overcast skies blocked the sun that would normally be in our eyes, so we got great looks at the usual ducks from the deck (including a nice Cinnamon Teal) and an oddball Least Grebe that still had remnants of stripes on the face!  We looked in vain for the vagrant Common Grackle amongst the hundreds of Redwings, but we got to witness a tussle between a female Archilochus hummer and a Buff-bellied!  An Altamira Oriole made a surprise appearance, and a flock of Least Sandpipers fed right below the deck!  At the other feeders near the restrooms, a female Archilochus sat and sipped that I felt comfortable calling a Black-chinned, due to the “blobby” outer primary and very long bill (plus the fact that the tail didn’t project beyond the wings).  We also had a White-eyed Vireo with a dark eye (probably a youngster, but we all thought it strange that both the grebe and the vireo wouldn’t be fully grown by now…).  Nancy spotted something in the trees behind the feeders that had me befuddled:  she described it as having this lovely yellow breast and blue back, with a black throat, and I was practically in a panic as I couldn’t imagine for the life of me what she was seeing, but when I finally found the thing her description was perfect:  a Green Jay! 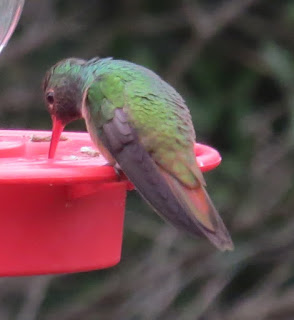 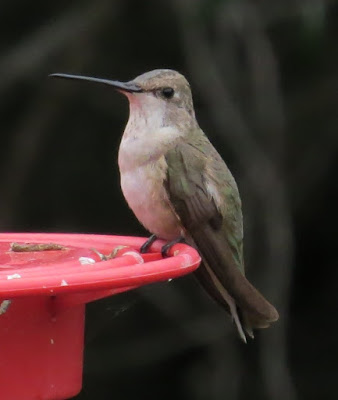 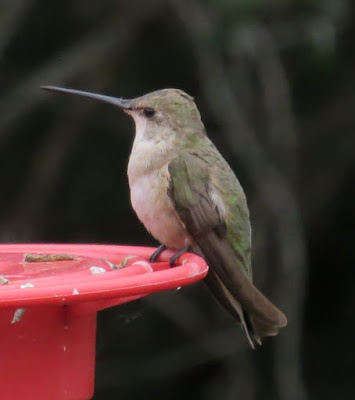 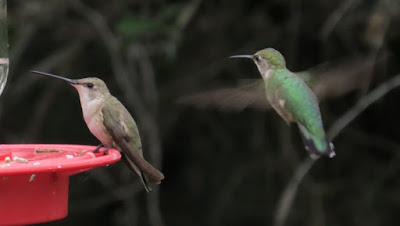 The bird on the right might be a female Ruby-throated Hummingbird; most tend to show a greener head than the Blackchins.

As we headed towards Dowitcher Pond I started rethinking whether this was a good idea, because my fingers were already feeling frostbitten! L  But Tom and Nancy were doing fine, so we continued on, enjoying a pair of Common Ground Doves on the floor ahead of us and startling a Tropical Kingbird right over the trail!  We had a nice display of Green-winged Teal and Black-necked Stilts at the pond, along with several Tree Swallows hunkered down on some dead wood in the middle!  Grebe Marsh turned out to be quite active as well, with several Long-billed Dowitchers feeding close by, and one Stilt Sandpiper on the far shore for comparison (a Long-billed Curlew yelled nearby as well).  At Alligator Lake that same Anhinga (and the Neotropic Cormorant, for that matter) that posed for Bill and Sue was in the same spot, along with the requisite Yellow-crowned Night Herons, and a pair of Mottled Ducks that had joined the crowd.  Across the way was an adult Least Grebe where Tom could actually see the yellow eye!  Alas, both the Pauraque and the Screech Owls were no shows, so we hightailed it back to the deck, where we ran into birding buddies Tamie and Lizzy from Harlingen (it was the weekly Thursday Birding Group, and they were the only two takers… J)  They were waiting hopefully for the Common Grackle, and I told them about our “Shiny Cowbird Wannabe” along the entrance walkway – the funny part was that they saw the same bird and went through the exact same thought processes we had! J Tom was very congenial with everyone we met and told the story about how everywhere he went, he seemed to bring disaster with him (the hurricane in Ireland, the earthquake in Costa Rica, and now the cold weather here J) to the point where his brother (I think it was, as a joke) sent word to him that Arizona heard he was coming and begged him to go to Montana instead! J  On the way out a very cold White-winged Dove was sitting near the building (along with a very cold Kiskadee), and around the corner we bagged a White-tipped Dove where the Chachalacas had been earlier… 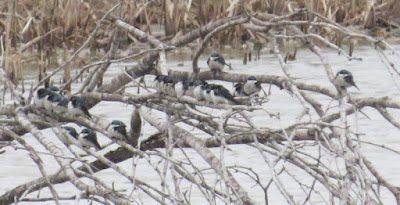 Tree Swallows hunkered down in the middle of the pond 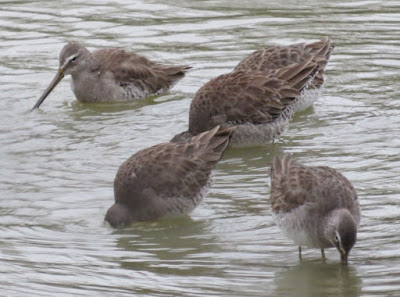 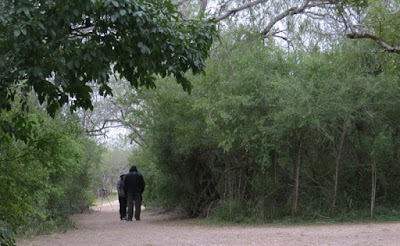 Tom and Nancy commiserate over the no-show Pauraque... 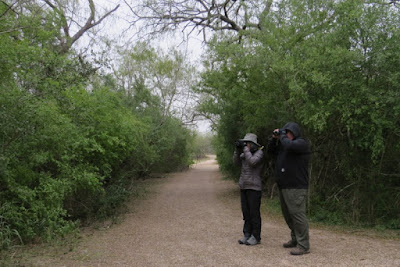 ...but enjoy a cooperative Yellow-crowned Night Heron instead (below)! 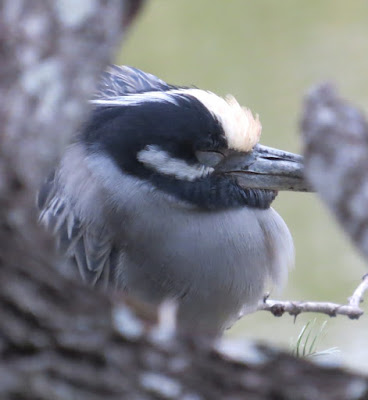 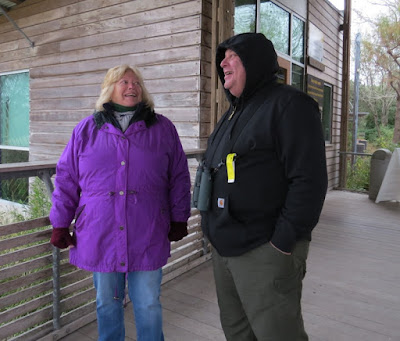 Tom entertains Tamie with one of his many stories!


Since I now knew where Dan Jones’ famous yard was, I thought that would be a good quick stop, so I warned him we were coming, stopped at the Stripes for coffee, played with the neighbors’ dogs when we got there J, then set up shop next to the resaca; Nancy especially was blown away with the mob of Black-bellied Whistling Ducks!  While we couldn’t find the Fulvous, we enjoyed several White Pelicans, the feral Muscovies, both flavors of night herons, and when Dan came out he refound the Sora he had seen several days ago!  The conversation turned naturally to the unusually cold weather, and Dan (who had lived here for several decades) enlightened us to the fact that in the “old days” this was normal in the winter!  Hard to believe, especially last winter when we had a few highs of over 100 degrees!  After much scanning we finally decided to retreat to the warmth of the car (as it had also started to mist), thanked Dan profusely for letting us trespass J, then decided to skip Quinta Mazatlan in favor of road birding due to the wet, so we headed straight for Anzalduas County Park via the “back way”.

"Dan's Back Yard" in Progresso Lakes!

This is the easiest way to see the Rio Grande, and my passengers were duly impressed that they were looking north into Mexico from this angle!  We obviously forsook the Pipit Poke this time around, but on the way in (not stopping so we wouldn’t get spanked J) a lovely Vermilion Flycatcher posed on a post!  We got our sandwiches and enjoyed lunch while poking around, picking up the scaup and a couple Ring-necked Ducks in the river, plus a Spotted Sandpiper near the boat ramp.  It was pretty quiet overall, but we did run into a large flock of Western Meadowlarks near the levee, and on the return trip to the river a Black Phoebe performed nicely on the concrete, while a beautiful Osprey sat across the way on the “island”.  On the way out what was probably the same Ringed Kingfisher we had last week posed on the same wire! 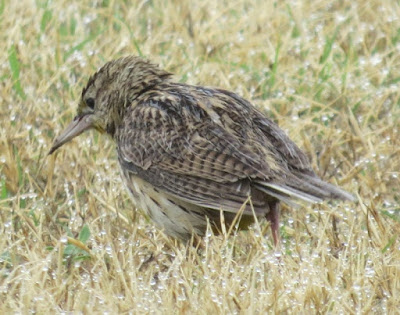 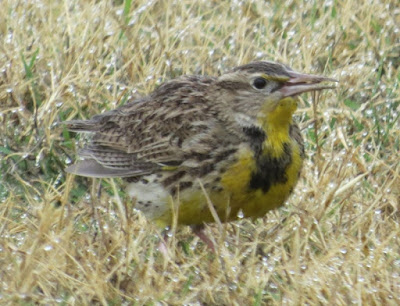 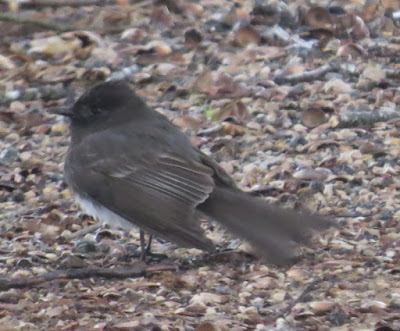 From there we headed straight up to Wallace Road, having fun conversation on the way (Nancy was the “straight man” to Tom’s boisterous personality J)!  It was still cold and miserable, but we ran into some surprisingly birdy flocks along the road:  Savannah Sparrows liked the plowed fields, both American and Lesser Goldfinches liked the sunflowers, and mixed flocks of kinglets, Orangecrowns (Tom actually saw the orange crown on one), and Yellowthroats liked the thornscrub.  Tom spotted a Harrier cruise across the road, and a young Red-tailed Hawk kept flying in front of us from pole to pole.  Tom also spotted a “blob” in the scrub that turned out to be a lovely White-tailed Hawk!  Every once in awhile I’d hear geese or cranes, and eventually they all showed themselves (flying away usually, but the cranes put on a nice aerial show)!  The wetlands proved to be quite productive, with a nice Harris’ Hawk that Tom was especially excited to see, plus odd shorebirds including a Lesser Yellowlegs and more ducks, along with a female Belted Kingfisher.  We heard a Swamp Sparrow peeping from the reeds at one point, and back in the ag fields a Caracara flew across the road and showed off nicely as he eventually came in for a landing.  A nice male Cardinal also added a little color to an otherwise muddy road!  When Tom announced that he had a Great-tailed Grackle in the scrub, I backed up just to add it to the eBird list (as we hadn’t logged it for the road yet), but when I spotted it, it looked just odd enough for me to say, “Well, it might be an ani!”  So we all get our bins on it, and it turns out to be part of a black plastic trash bag shaped like a grackle/ani!  Boy, did we have a good laugh over that one! 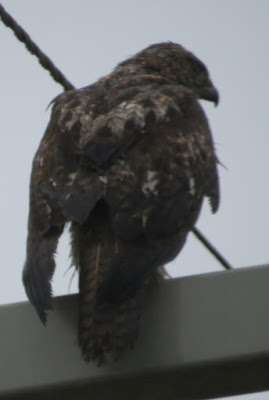 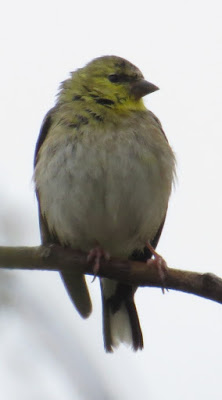 We decided to call it a day when we got to the end of the road, so we had a little extra time to do the checklist back at the Inn!  For such a crummy day weather-wise, we managed a decent list of 86 species!  Bird List: