Adding to the Life Lists

It was still a little blustery the next morning (and chilly to boot), but not as bad as the day before, so we headed out to Estero Llano Grande with high hopes.  It was actually pretty quiet going in, and as we went straight to the drip, things were still pretty slow when we saw Doug the Bird Feeder coming with the goods, so we decided to make the loop and come back after the food was out.  Not being quite sure where this “Kingbird Trail” was that the Hammond’s Flycatcher had been seen on, we made the entire loop, not picking up much of anything really (except for some silent kingbirds around Ben Basham’s place), and coming back on the Tyrannulet Trail.  At the end of that, that’s where we saw the sign to the Kingbird Trail (it was the next road over), so we headed down that, and saw some exotic trees that we agreed might fool a Hammond’s into thinking he’s up in the mountains! J  We couldn’t find him, but we did have a feeding flock that contained the regulars, as well as a White-eyed Vireo that looked like a gnatcatcher to my naked eye!  A White Ibis flying over was a nice surprise before heading back to the drip, now with fresh oranges that we were amazed the bugs had gotten into already, until we realized the “bugs” were actually sunflower seeds that Doug had apparently wedged in them! J  This time a couple of White-tipped Doves pranced right in front of us, and an Orange-crowned Warbler took a bath, but no Tropical Parula…  So we headed back to the main park and finally found some Clay-colored Thrushes right across from Rick and May’s camper!  I later found out from Ranger John that they were hosting both a Black-chinned and Rufous Hummer; thankfully my “guidees” didn’t need either…  On the way to the Visitor’s Center we heard a Catbird mewing in the bush, but he didn’t want to come out (especially with all the blackbirds monopolizing the feeders)… 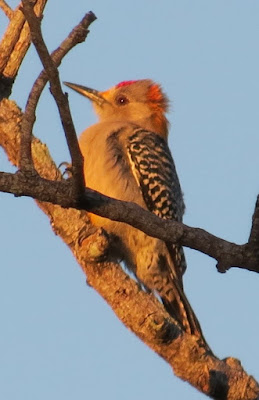 Cold Golden-fronted in the morning light 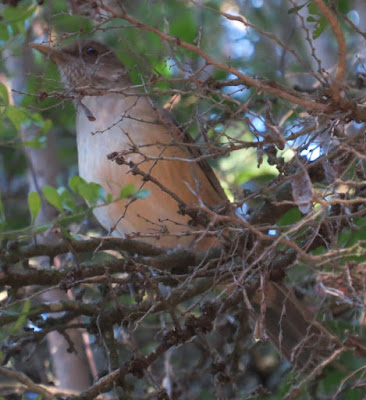 After checking in we padded the list with the usual ducks, plus a nice flock of Least Sandpipers.  We ran into John and Doug, and they told us a) where the Pauraque was now hanging out (someone apparently spooked him from his normal resting spot), and b) where we could find a fairly reliable Screech Owl up on the levee!  So I decided to take them on my normal loop, which went out over the boardwalk (the Spoonbill Trail) before looping back through the grasslands and over to the levee.  With the sun to our backs we got much better looks at the ducks, and picked out a pair of Cinnamon Teals amongst the Gadwalls et al!  Since it was still blustery we couldn’t kick up any dickey birds as we went along, except for a Lesser Goldfinch that teed up on a tree (but left the minute I put the scope on ‘im).  Near Curlew Pond we did manage to scare up some sparrows, and some nice ones at that:  Field Sparrows show up every year, but are rare enough to be flagged on eBird, so that was a nice catch!

Jim and another photographer shoot the ducks... 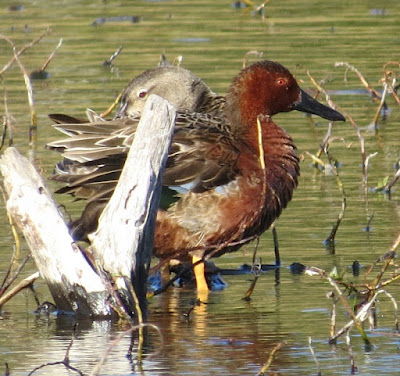 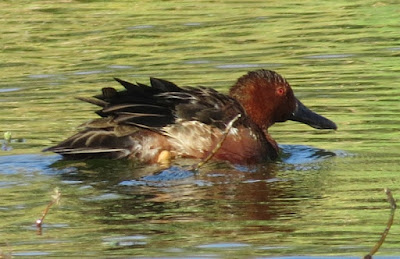 Before heading up on the levee we checked the south end of Dowitcher Pond, where a Vermilion Flycatcher was flycatching from the back of a bench before literally being blown away!  The guys were asking me what all those “white ducks” way out there were, and they turned out to be a mob of Green-winged Teals that all had their bottoms up at the same time! J  Up on the levee it was naturally windy, but we had a nice assortment of new birds including White Pelicans, and both stilts and avocets!  We found the pink ribbon that marked the location of the owl box down the slope, but he wasn’t home L, so we headed over to the steep trail that leads to Alligator Lake.  Making the turn we picked up Anhinga right away, plus a Neotropic Cormorant right behind him, a lifer for both!  The Yellow-crowned Night Herons started magically materializing out of nowhere, and later a few Blackcrowns would appear on the other side.  Just next door the Pauraque was right where Doug said he would be, so everyone had great looks; this one was really showing off the length of his tail!  From there we went up the left fork to see if that owl was home, but he wasn’t… L

Pauraque (check out that tail) 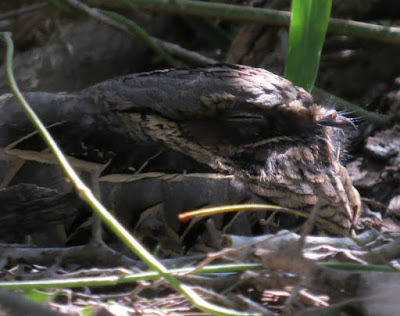 As we continued Bill was busy shooting a night heron while Sue and I approached the Little Overlook, when a Green Kingfisher shot away and landed on the other side, to her delight!  She got great scope views, but Bill was nowhere to be found, so she went to get him while some newbie birders looked at the bird through the scope.  Unfortunately by the time Sue was able to retrieve Bill the kingfisher had gone, so that was an unhappy moment, but we were hoping to run into him again.  With nothing but another Anhinga, a Tricolored Heron, and a couple of Snowy Egrets at the Big Overlook we retraced our steps and headed towards Grebe Marsh, warning Bill that Green Kingfishers also like that little canal!  We were checking out things at the Marsh (Spotted Sandpiper was new, and the Greenwings were in beautiful light), when I heard the distinctive ticking, then Sue spotted the thing shooting down the canal, then landing in perfect light!  So we were very glad that Bill finally got to see it (and we pondered whether it might be the same bird, as both were males, and I’m sure he has a circuit…)! 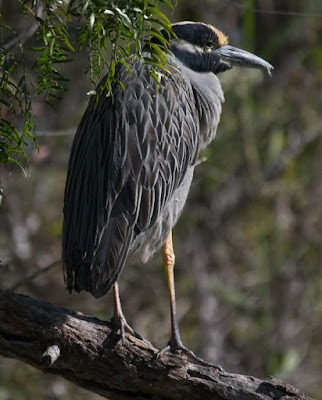 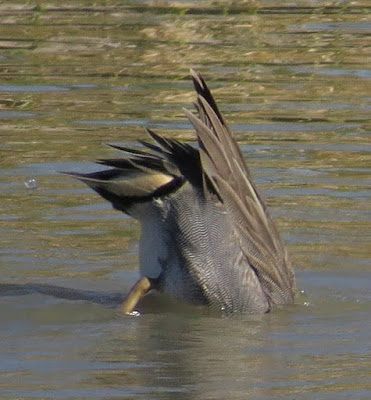 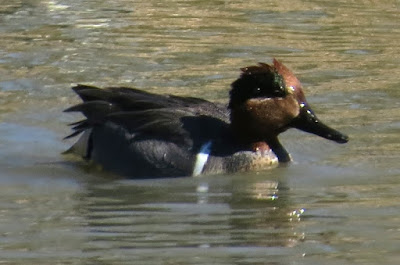 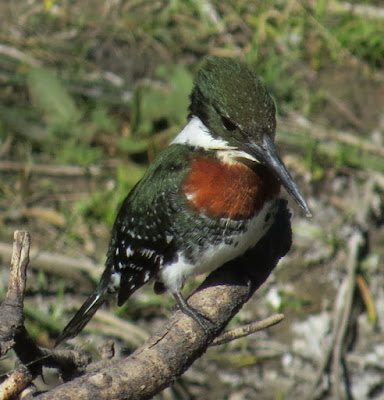 From there we pretty much headed straight back to the parking lot, as we had discussed stopping back at the Inn for something Bill needed, and then heading to lunch, which we did at Tower Burger right down the street (they saw what I meant about the place being popular, as by the time we left the line was out the door)!  From there we headed up to Brushline Road, where it was still a little breezy but not nearly as much; we stopped and pished whenever we heard something, and right away that yielded their life Verdin and Long-billed Thrasher (plus tons of Orange-crowned Warblers)!  The wetlands were dry, of course, but we did manage to add a lovely White-tailed Kite on the wire, and a flock of a dozen Savannah Sparrows closer to SR 186. 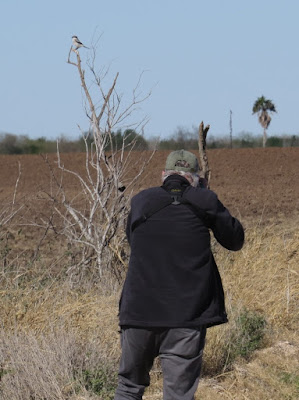 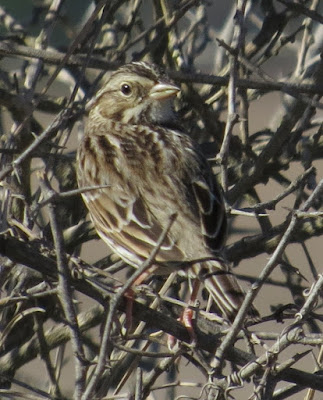 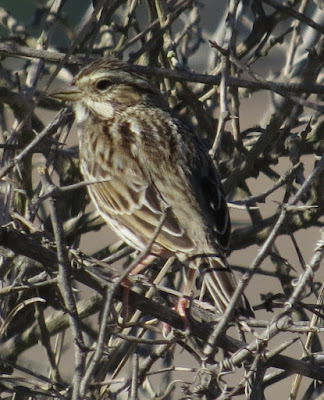 Stopping that eBird list and starting a new one north of the highway, Bill got it off to a great start with a Roadrunner (that only he saw)!  A little further on a pair of Pyrrhuloxias were fairly cooperative, and we had several Red-tailed Hawks along the route (but no Whitetails unfortunately L).  A nice Cooper’s Hawk was sitting on a post (until we got the cameras out), and further down we had a flying accipiter that made us jump out to view, which turned out to be a classic Sharp-shinned Hawk!  Turning down Ken Baker yielded no new birds, and about that time we had to start heading back, so we barreled down Rio Beef Road (Bill thought I did a good job of avoiding the potholes, but I nailed a doozy L) and headed home with 79 species for the day! 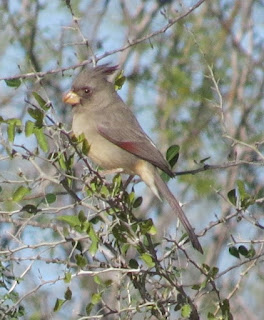 Female Pyrrhuloxia (blow up from the photo below; male is on the left) 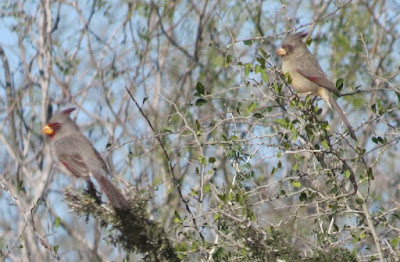 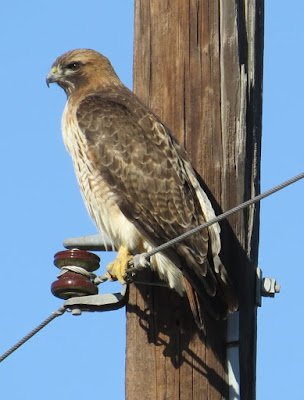 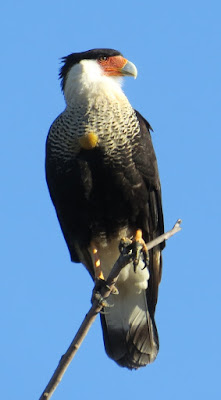