While the Guys are in Greenland... Part 1

Susan from Pennsylvania had a few days to bird a new area while her husband and son were off hiking in Greenland (!!), so the original plan for this day was to get to Bentsen Rio Grande State Park pre-dawn and listen for night birds, then bop around nearby for the rest of the morning.  Well.  Plans were changed at the last minute due to a Piratic Flycatcher found by Mark Esparza at Resaca de la Palma State Park on Saturday!  Susan was game (she had seen the bird in Trinidad but was more than happy to add it to her ABA list J), so we headed over there first thing, being slowed only a little by a detour that took us all the way down to US281 and back up New Carmen.  But we picked up a Harris’ Hawk that way!

Interestingly, the gate to the main parking lot was open already (it was about 7:15), so we wheeled in, picking up a pair of Chachalacas by the road, and an unusually cooperative Olive Sparrow hippity-hopping along the other road!  After parking we headed down the tour road, and it wasn’t long before we came to the “magic tree” (a dead one that the bird apparently found acceptable as a high perch)!  No Piratic, but it proved attractive to both Couch’s and Eastern Kingbirds, Brown-crested Flycatcher, and Golden-fronted Woodpecker (I think a Ladder-backed even came in for a visit)!  A whistling Altamira Oriole got us further down the road, as Susan thought she had one at Santa Ana on Sunday but wasn’t sure (due to their similarity to Hooded).  But this one gave us a great look after a little hide-and-seek, and even sang his happy whistle for us!  A Long-billed Thrasher wasn’t nearly as cooperative (I had to promise her one at the Butterfly Center J), but an Olive-sided Flycatcher sat up nicely instead.  White-tipped Doves were calling but not showing, and ratty-looking Green Jays made their way through the trees, doing their “roll call” among other noises.  A Clay-colored Thrush did his robin-like ring as well. 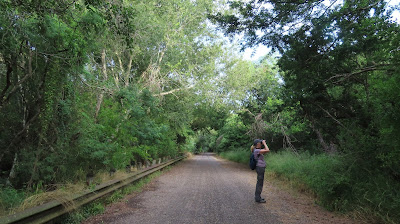 Susan checking out something along the tour road 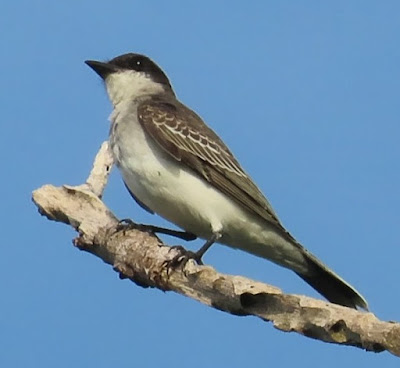 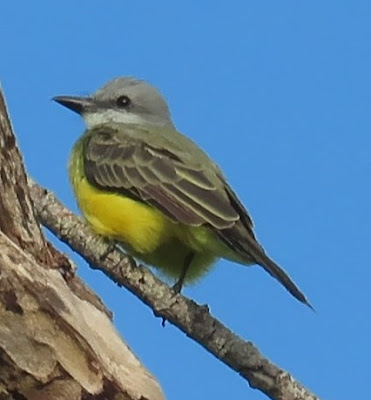 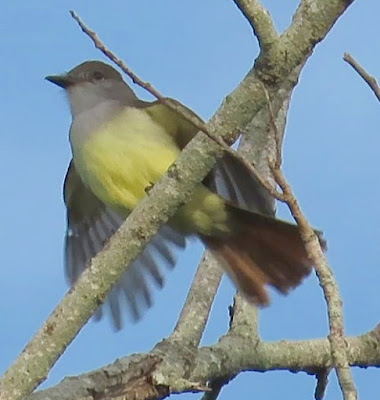 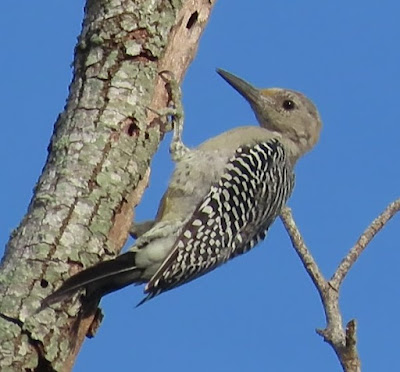 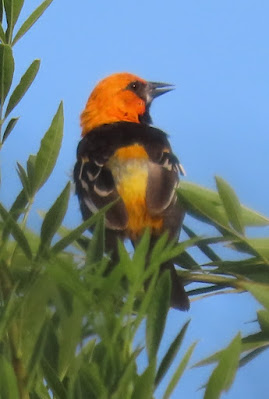 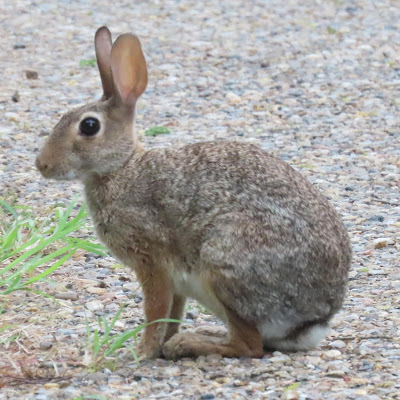 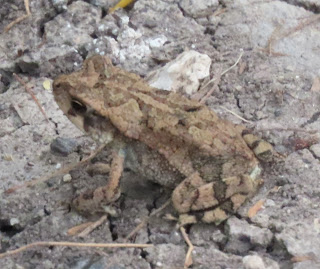 Gulf Coast Toadlet (it was tiny)

We spent about an hour there with no sign of the Piratic (hadn’t been seen all day Sunday, either, so we weren’t super hopeful) and added a buzzing Blue-gray Gnatcatcher back at the car.  The road work along FM 1732 wouldn’t let us turn right towards the freeway, so we turned left and headed back up FM 1421 to the freeway (with nothing in the resacas along the way).  From there we headed down to the toll road and then Old Port Isabel Road (OPIR), since there had been no rain there in ages and I figured the road would probably be passable.

It was quiet to start, but just before hitting the railroad tracks Susan’s life White-tailed Hawk sailed across the road!  Near the canal a Forster’s Tern flew by, and several young White Ibis flew right overhead!  A little further up a covey of Bobwhite crossed the road and gave great looks, and a short-tailed Yellow-billed Cuckoo showed well.  At the pond past the Chicken Coop Spot was a Mottled Duck surrounded by several Blue-winged Teal, a couple of Coots, and some baby Pied-billed Grebes with Momma!  A Scissor-tailed Flycatcher gave a nice view, and up past the pipeline area (where the road starts to get dicey) I spotted a distant Caracara on one of those big crossbars.  Ironically Susan had spotted one even closer that I hadn’t seen, and as we got out to look, a third bird joined the first one, Susan’s bird took off towards the other two, and before long they started making more Caracaras! J  (My initial bird turned out to be a youngster…)  Behind us in rotten light was another White-tailed Hawk on a pole, and a little further up some Long-billed Curlews came sailing in, another lifer for Susan! 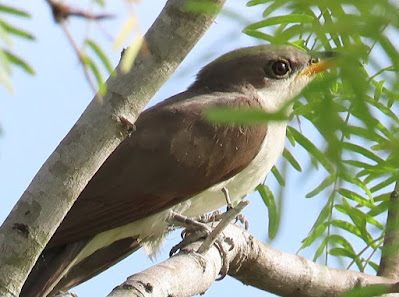 ...where a friend peeks out from behind the post! 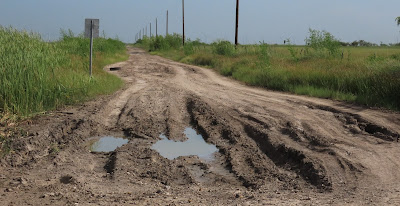 Why OPIR has such a bad rep... 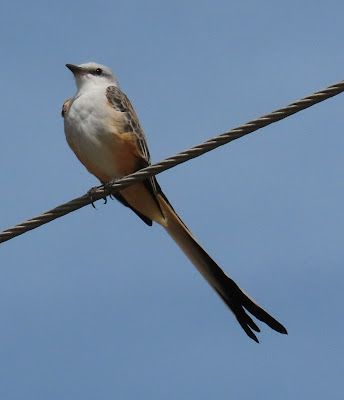 I was toying with the idea of taking Susan to the Laguna Vista Nature Trail for a shot at the thrasher (as they come in to the water features), but it was getting pretty hot, so we opted for the Island.  Susan spotted several Brown Pelicans just before we got on the causeway (not a lifer, but something she hadn’t seen in years), and once on we headed straight to the Flats.  There were plenty of larids lounging around, and we quickly had her life Black Terns in spades!  Least Terns were also around (along with the ubiquitous Royals and a single Sandwich), but I (as always) was charmed by the cute little Piping Plovers!  There was a smattering of other shorebirds and herons (nothing to write home about, although the turnstone still in breeding plumage was nice), and we finally picked up three skimmers on the way out.

Congregation of larids on The Flats 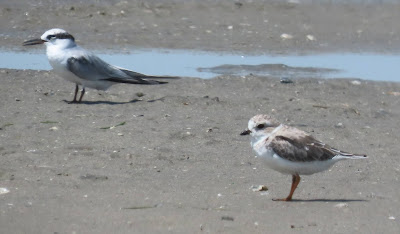 With a first-year Least Tern in back 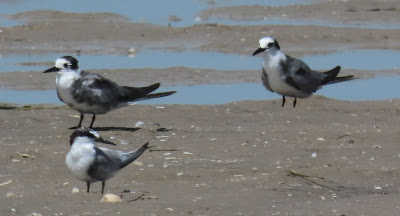 Two non-breeding Black Terns with a Least Tern in front

I wasn’t sure what we’d find at the Convention Centre, but we thought we’d check it out, and five minutes at the water feature yielded a flighty Canada Warbler!  A couple of pewees were in the “back yard”, a male Ruby-throated Hummer went buzzing over, and at the mudflat overlook we had a lineup of egrets on the pilings (Cattle, white morph Reddish, and Snowy, along with the ever-present Neotropic Cormorant), and lots of Marbled Godwits all spread out!  On the way back my laser pointer fell apart, and in the process of trying to retrieve the batteries that kept falling out of my pocket, my phone also decided to fall out of my pocket, which I didn’t notice until we got the Birding and Nature Center next door and I realized I had forgotten to close out the eBird list!  So we went wheeling back, and thankfully it was still there, right where I suspected I lost it!  On the way back to the car a Least Bittern cackled, good for the day! 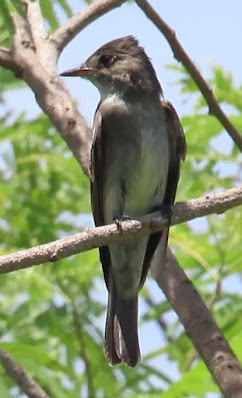 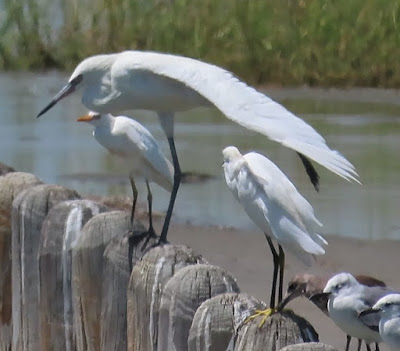 Returning to the Nature Center, we spent a few minutes at their water feature and had another frustrating empid that at the time we were leaning towards Yellow-bellied, but after reviewing the video it clearly looks like a Least, with a nice short primary projection (although the bill looked a little long from that angle).  However, a second video of an apparently different bird clearly looked more like a Yellow-bellied, so I would say we had both!  More Yellow Warblers were about, and along the boardwalk we added Mottled Ducks, Common Gallinules (along with squealing babies), Mangrove Buckeyes (token butter), and both night herons flying overhead.  They don’t have a name for it, but there’s a little open area near the freshwater section that almost always has stuff, and this time we had a group of White Ibis, Black-necked Stilts (including some juvies), a Spotted Sandpiper, a Semipalmated Plover, some Least Sandpipers, and a single Short-billed Dowitcher.  Rounding the corner we spooked a Belted Kingfisher, which surprised me as I thought he was early (he’s always there every winter), but eBird was expecting him!  J  I was really pooping out by the time we reached East Pond so we just took a cursory look and added a couple of spoonbills and some Snowy Egrets.  As we dumped out into the parking lot a couple of Tropical Kingbird rounded up the day with 90 species! 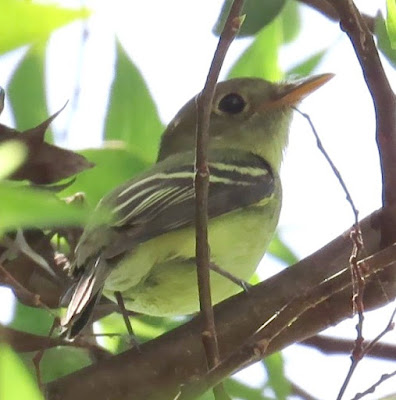 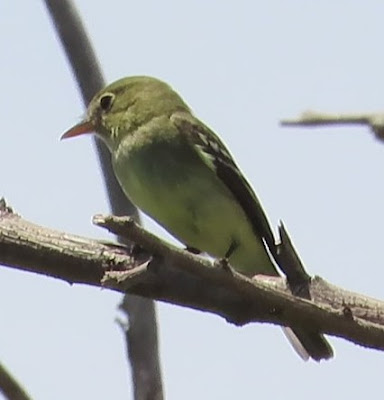 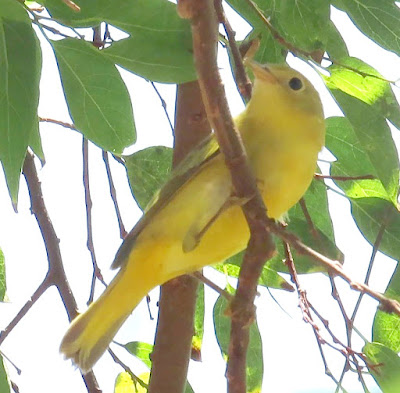 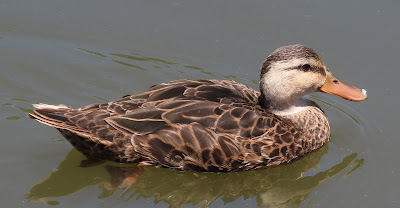 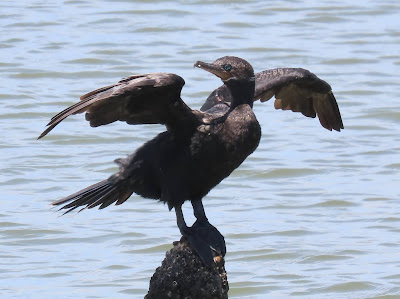 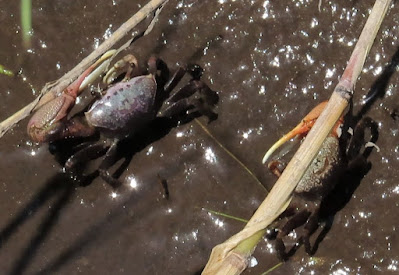 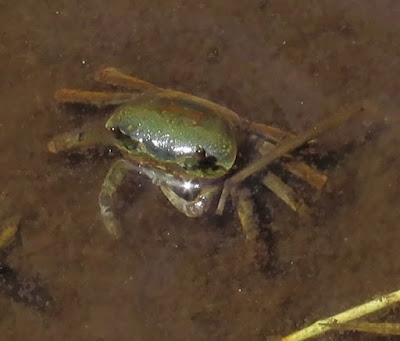 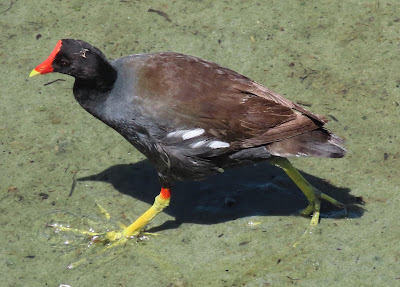 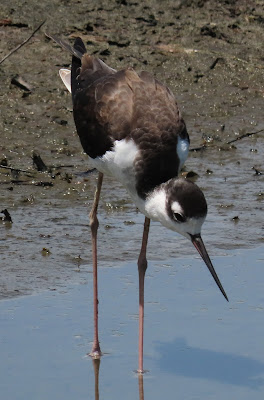