A Guide in the Making, Part 2

Well, I was greeted with the good news that Hudson had gotten his Aplomado Falcon along SR 100 the evening before (and the bird was apparently well-camouflaged, too…), so that was wonderful!  This morning we took off first for Palo Alto Battlefield in hopes of seeing the Lesser Nighthawks I had seen the last time I was there; no Lessers (although we heard Commons), but we did find a female Hooded Oriole next to the building!  We scared a pair of huge Nilgai as we approached the trail, and at least got a better look at a singing Botteri’s Sparrow and a couple of Lark Sparrows!  Hudson picked up the bouncing ball song of the Olive Sparrow, while a Bewick’s Wren also sang unseen.  Circling back around the building an Eastern Cottontail was very friendly, and while the gang was enjoying his antics a huge Indigo Snake slithered across the sidewalk!  (Hudson wanted to play with him, but I told him that’s why they’re endangered:  they do make good pets because they’re so docile!)  But just as one snake disappeared, Paul spotted another one that we all walked right past and never saw:  a coiled up Western Diamondback Rattler!  What was amazing was the fact that we passed so close and he didn’t bother rattling (he did look rather full), but that started a conversation about how some rattlesnakes have quit rattling, and one of the theories was that they’ve learned that (in some places) rattling only attracts a hoe or a shotgun! 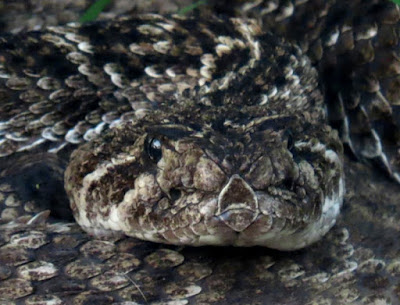 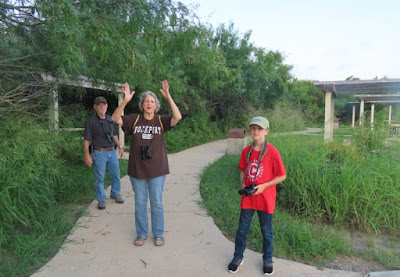 "Too much excitement for one morning!"

From there we went to Resaca de la Palma State Park to try and get some of the Valley specialties we would have ordinarily gotten at Sabal Palm.  The main gate was open, so we parked in the lot and started wandering; right away Hudson spotted his first Green Jay!  As usual, birding the lot proved very productive:  we also picked up Altamira Oriole, a fluttering Kiskadee, Couch’s Kingbird, another Long-billed Thrasher, and something I hardly believed myself:  a Pauraque doing a subsong!  We soon heard some jays fussing over by the visitor’s center, so we went over to see if we could find yet another snake J, and saw that the mob included another oriole and a couple of grackles!  (The grackles seemed to be part of the mob, not the cause of it…)  Our approach broke up the party, and about that time the center opened, so we went on in to check in. 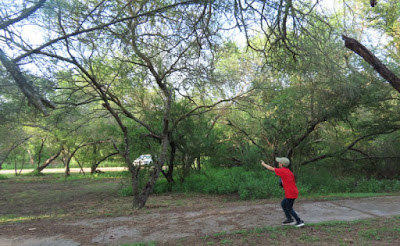 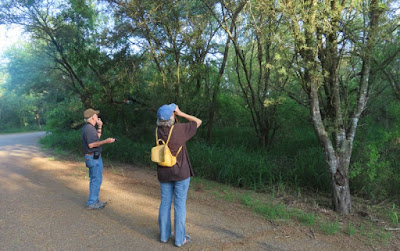 Paul and Karen check out a Kiskadee 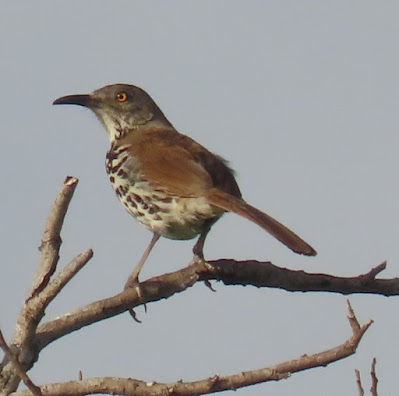 A little later we ran into my friend Alicia, who was gonna drive the tram that morning (which was something Karen especially was interested in)!  We tried a little of the Ebony Trail where Karen and Paul pointed out several flowers (including this stunning Passion Flower), and a nice Brown-crested Flycatcher posed, but we were ultimately driven back by the mosquitoes L.  Heading around the back of the building one of the rangers called our attention to a tarantula she was trying to rescue!  (It was actually trying to get in the building…)  It was really putting on a defensive show, and the ranger thought that maybe it had been traumatized by a Tarantula Hawk Wasp (which we actually had seen earlier), and described the Alien-like way the wasp would lay her eggs inside the tarantula, and the babies would then eat their way out once hatched! 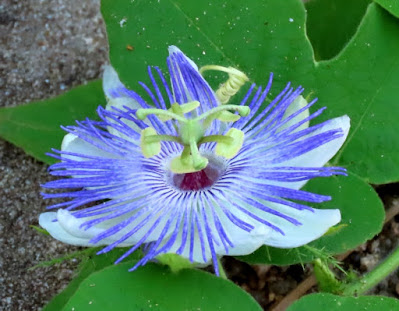 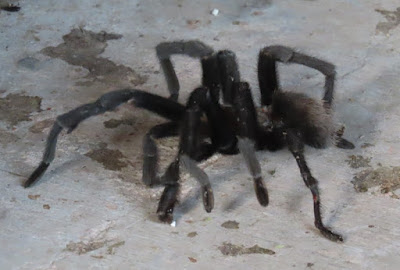 By then it was time for the tram ride, and we actually went by way of the mesquite savannah first; a Blue Grosbeak sang unseen while the gang tried to zero in on some kingbirds.  Alicia identified a lot of the trees and plants for us, including a delicate little Salvia flower!  A Bronzed Cowbird had the trail claimed, and Yellow-billed Cuckoos were all over, more so than in previous years, Alicia was saying.  At one point an interesting bug landed on the tram; our first thought was an assassin bug of some kind, but the guys at BugGuide came to the rescue and ID'd it as Mozena lunata, a leaf-footed bug with thus far no English name!  (Shall we make one up?? 😁) 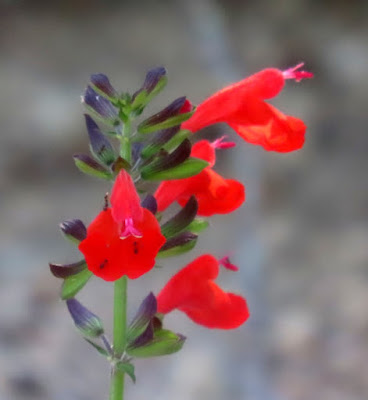 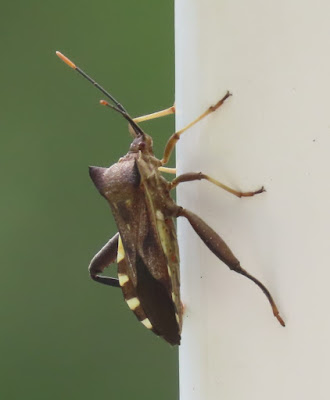 "Luna Leaf-footed Bug" hitching a ride on the tram!

The real treat was going down Hunter’s Lane to the resaca:  three Black-bellied Whistling Ducks posed, and Hudson at least spotted both a Yellow-crowned Night and Green Heron!  Least Grebes were trumpeting unseen from the grass, and I was surprised to hear a Belted Kingfisher, but apparently a few do hang around all summer!  Alicia showed us an Altamira Oriole nest, and interestingly a couple of Tropical Kingbirds fluttered up to that tree and took a strand of material from the oriole nest!  White-tipped Doves were calling all over but never showed, along with a distant Common Ground Dove.  We had been hearing chorusing Chachalacas all morning, but distant, so we were thrilled to see some on the road way ahead of us (with an ani calling next to us), and actually stay put as we pulled alongside them, the male fanning his tail like a little Turkey! 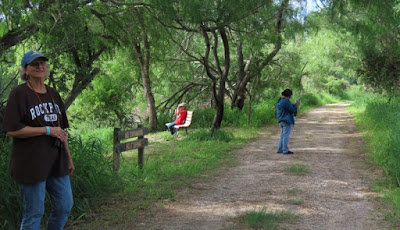 Karen, Hudson, and Alicia on the Hunter's Trail 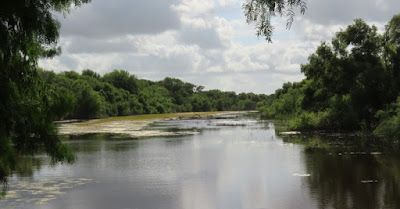 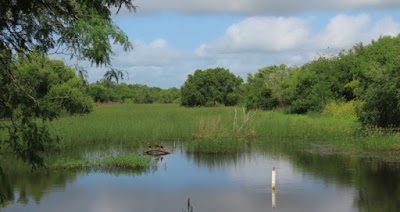 Looking the other way 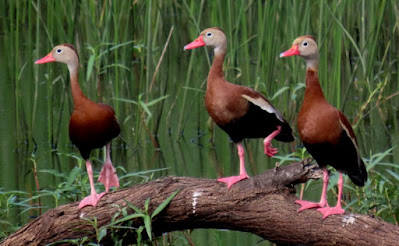 Black-bellied Whistling Ducks (can you see them in the resaca picture above?) 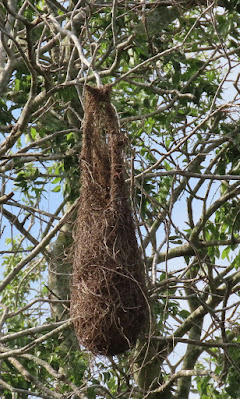 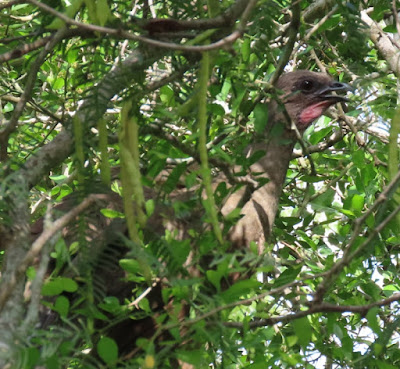 Catfish proving that they're not always bottom feeders! 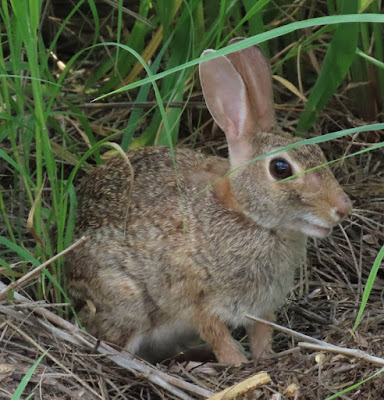 After finishing that up and kissing Alicia goodbye, we paid the gift shop one last visit (Grandma and Grandpa bought Hudson a stuffed Roadrunner, and all of us an ice cream J) then made our way back to the car, with one last Green Jay seeing us off! 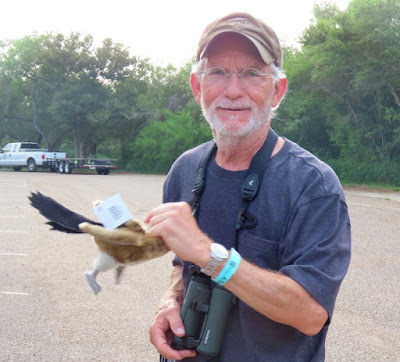 Paul playing with the Roadrunner he bought Hudson (needed a video to appreciate it... 😊) 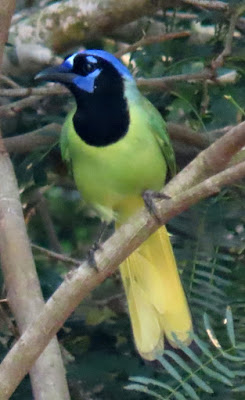 A try for the Tamaulipas Crow was next, so we headed over to the Brownsville Dump, where the line going in was almost enough to discourage us!  While we were waiting I heard a Bobwhite and thought I saw it sitting up on a metal post, but it turned out to be a meadowlark… L  But we patiently made it through and went up to the fences, parked, and poked along.  Almost right away I spotted a crow heading away from us over the hill; Paul and Karen got on it before it dipped out of sight, but unfortunately Hudson wasn’t able to, so I was sorely bummed! L  So we kept scanning; we did see a couple of Chihuahuan Ravens on a distant fence, which was also a life bird for Hudson, so that was fun!  After several minutes of searching, it sounded like the folks were ready to throw in the towel (I think lunch was on their minds J), but Paul suggested we walk up the hill where the crow had gone, and Karen agreed that would be our “last-ditch effort”!  The words were hardly out of her mouth when here came the crow!  He landed on the fence right on front of us and “burped” at us, and then his/her mate came wheeling in!  After posing on the fence they went down to a mound of garbage (where the lighting was admittedly better) and gave great looks before finally taking off!  What a show! 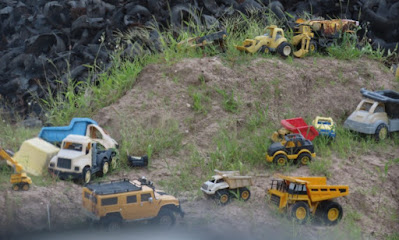 Someone got creative and put together a "toytown" landfill!

The gang studies the Chihuahuan Ravens (below) on a distance fence. 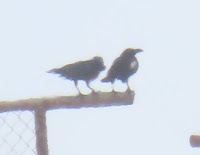 Lousy picture, but it shows the diagnostic white basal feathers! 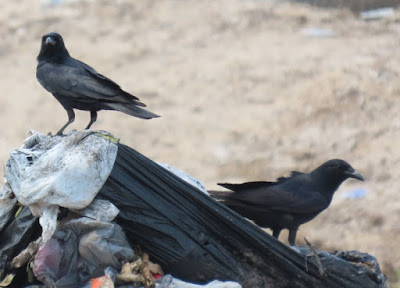 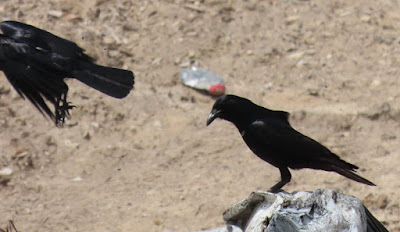 Showing the squared-off tail that would rule out the raven... 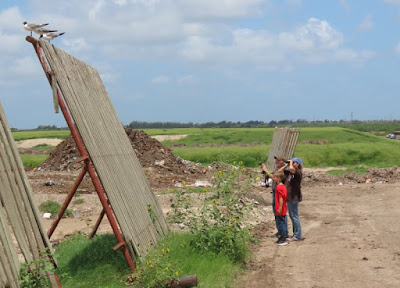 The crew enjoys the crows (who are behind the fence)!

Headed home after that with a modest 56 species for the morning, but included some great birds (along with the other great critters)!  Bird list: