While the Guys are in Greenland - Part 3

I think we both kinda floated out to the car at 5:15 AM after getting back after sunset last night, but we headed out to Salineno good and early in order to get there by dawn, which we did (a little before, in fact)!  We set up shop at the boat ramp (after avoiding a couple of Subaru-swallowing ruts in the road going down) and spent about 15 minutes there to start, waiting to see if anything would come our way.  One of the specialty birds, an Audubon’s Oriole, sang sadly in the distance, but the others didn’t show themselves; we did add a calling Gray Hawk, lots of Couch’s Kingbirds, invisible Green Jays, and a Green Kingfisher that blasted out of the reeds and then shot right by us at close range!

The Rio Grande at the Salineno boat ramp

We headed down the trail after that, with lots of stuff chattering but hard to pick out in the foliage.  Warblers were definitely going through, but the only one we could positively identify was (of course) a Yellow (which most of them probably were).  A Black Phoebe sang, and what I thought was said bird silhouetted against the sky turned out to be a Couch’s Kingbird! J  A cute little tailless Blue-gray Gnatcatcher had me fooled into thinking he was one of those very dull first-year Yellows at first, and several Orchard Orioles nyeped and flew across the Rio Grande.  A Ringed Kingfisher betrayed his presence with his single-shot rifle call as he rowed by, and down the trail we heard the rapid-fire rattling of the Belted for a kingfisher sweep!  A troupe of Groove-billed Anis followed us around, and down at the cul-de-sac we added a female Summer Tanager to the list in a tree-full of no-see-um warblers.  We gave that 15 minutes as well, adding flyover Neotropic Cormorants, a low Chimney Swift batting by, and a calling Spotted Sandpiper.  No seedeater or Red-billed Pigeons L, so instead of continuing to the Dump Road to pad the trip list, we opted to stay at the river as we really needed to get a look at that oriole, which we never heard again along the whole trail.  We did get a fairly good look at another Altamira however, that had me fooled at first as we were also hearing Hooded Orioles in the same spot, so I just assumed that’s what it was at first until I got a better look! 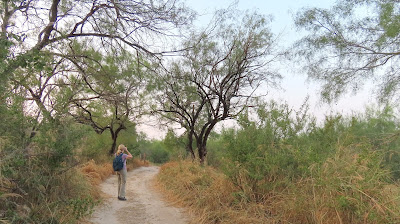 Susan on the Seedeater Trail 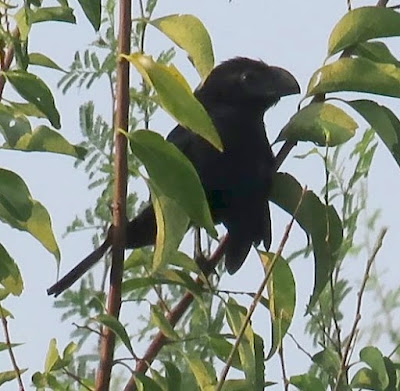 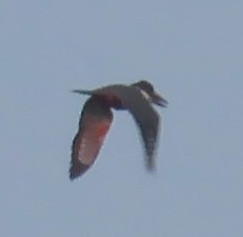 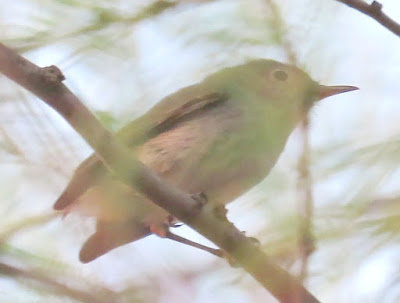 Back at the car we pulled out the chairs and set up vigil at the boat ramp, which was very pleasant and relaxing (and after not so many hours of sleep the night before, it was hard to stay awake, or at least expend any energy J)!  A couple of Caspian Terns powered down river, and Susan was surprised at the brightness of a flock of Red-winged Blackbirds in molt that flew by!  A wonderful video op presented itself when Susan spotted a flock of Cattle Egrets coming low over the water from upriver, that conveniently “hid” behind a spit of land (good place to start the camera rolling) before streaming out towards us again, and eventually right by us!  A Common Ground Dove poked his way down the actual ramp, and in between birds we were entertained by a female Roseate Skimmer that was ovipositing right in front of us, plus both male and female Eastern Pondhawks that posed.  But as I was filming a young Scissor-tailed Flycatcher that was sitting up on a tree, suddenly the Audubon’s started his jay-like shack shack right there!  Susan spotted him right away before he took off, but eventually both birds came back and sang for us, giving great looks! 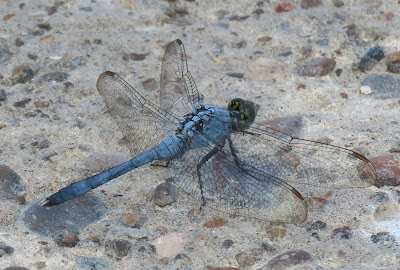 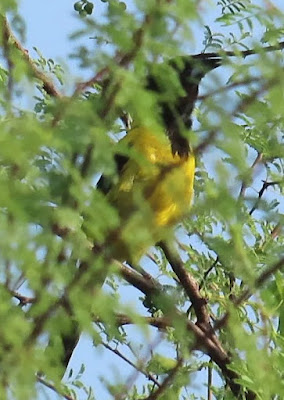 Audubon's Oriole hiding in the tree 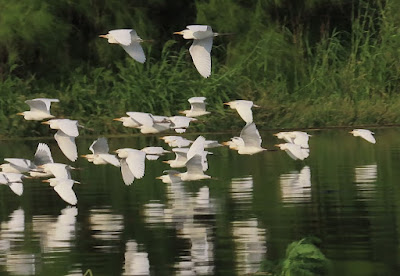 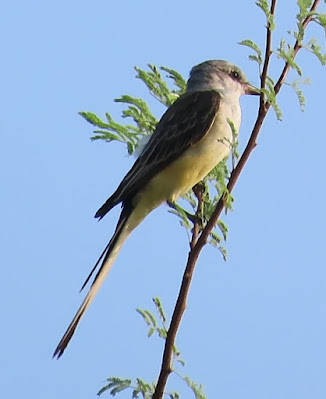 All too soon we had to head back, white-knuckling it through the freeway construction (we saw several accidents on the way going the other direction), but having plenty of time to rest up before the evening excursion!  We left again at 5:45 to make it to Oliveira Park in Brownsville about an hour before sunset, as sometimes the White-fronted Parrots would come in early.  They never showed, but I was shocked to see so many cars and almost every parking spot taken – it was Soccer Night!  We pulled into the far northern lot just to get the eBird list started, and enjoyed a Loggerhead Shrike on the wire in front of us as well as tittering Tropical Kingbirds.  From there we carefully made our way to the middle  section where we would traditionally park and wait for the show, and miraculously found a spot in the shade!  We pulled out the chairs and enjoyed Golden-fronted Woodpeckers and checked out every pigeon and White-winged Dove we saw, in addition to enjoying the kids (and some adults J) at their games! 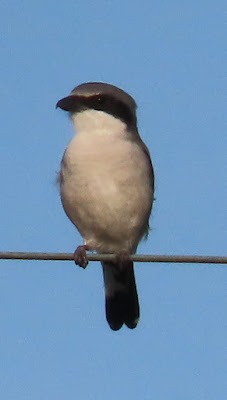 At one point I happened to look up into a tree across from us, and there was a single (and silent) Red-crowned Parrot just sitting there!  Good for the life list, but presently three of his buddies came squawking in, and he joined them as they took off north.  Presently we heard more coming in from the west, and before long they were landing on wires, so we drove over to the skateboard area where more parrots were settling into the trees there!  As we followed them up and down the street we eventually found a couple of Red-lored Parrots in with them, but never could pick out any White-crowned, Yellow-headed, or Lilac-crowned (lots of youngsters, though, some still begging, who can look very much like Lilac-crowned).  It was hard to pull ourselves away, but eventually it simply got too dark to see any detail (heard a Common Nighthawk on the way out), so we gassed up and headed home (Siri led us on a merry romp behind the mall before finally finding the freeway L), with a modest 57 species for the day.

As the sun goes down, the parrots come in! 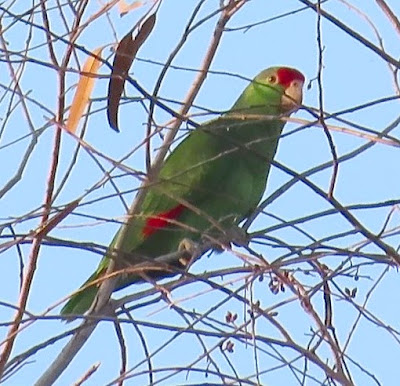 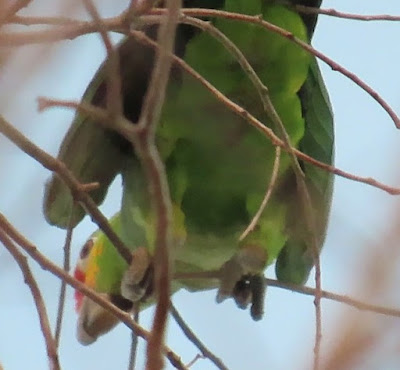 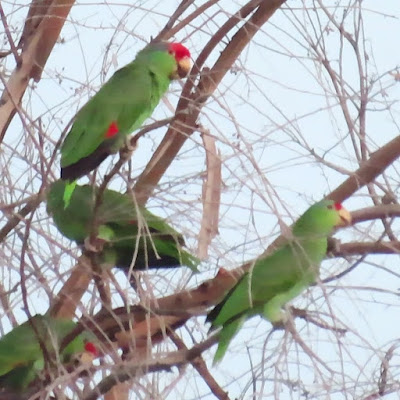 Adult Red-crowned with a youngster on the right; by this time it was too dark to see detail, so I just opened up the exposure meter for this video grab!