In Search of the Perfect Picture, Part 2

Lori was gonna rent her own car so she could go kite-boarding on the Island, so Slava and I took off at six to head for Old Port Isabel Road in search of Aplomado Falcon!  It was pretty miserable driving out there, however, and I was concerned about the condition of the road!  But by the time we got there it was just misting (and the first part of the road looked good), so I was hopeful!


We started the crawl, and while the traditional nesting platform was empty, we spotted different stuff along the way, like White-tailed and Harris’ Hawks, Long-billed Curlews, a few songbirds calling along the way (including stubborn Sedge Wrens in the grass and lots of Mockers out in the open), and a distant Osprey that got our blood going for a minute!  Slava spotted a pair of Pied-billed Grebes in one of the ponds near the road, but we eventually came to a point just past the pipeline construction where the condition of the road demanded that I declare a turnaround.  As we got out to scan at that point, we spotted a bird on the wire quite a ways down, and Slava walked down enough to get an ID shot – it was a pair of Aplomados!  I gazed at the Grand Canyon Ruts ahead of us (which would have been no issue if the road had been absolutely dry, but it wasn’t), so since the road was good past the canyons and the ridges looked pretty solid, we gave it a go.  A little slip-sliding before we made it across encouraged Slava to offer to drive when we headed out (he also owns a Forrester)! J 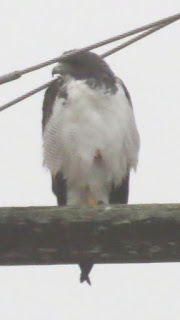 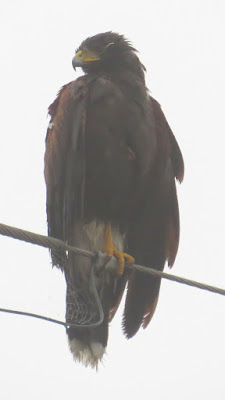 At any rate, once on the good road we crept up, wheeled the car around so he could shoot out the window, and by doing that several times he was able to get what I considered knock-your-socks-off photos!  But being a professional photographer he was looking for the “perfect shot” that you could “hang on your wall”, and with the weather the way it was (and the choice of perch the falcons had made), it wasn’t the most artistic setting, but like Keith told me later, if the picture I got was stunning (according to him), the pictures Slava got must have been incredible (and they were)! J 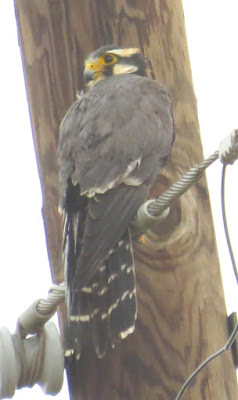 Several views of the Aplomado Falcon 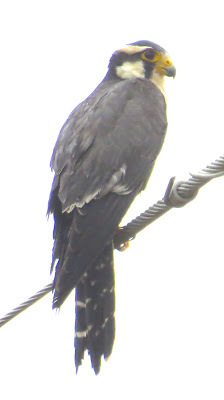 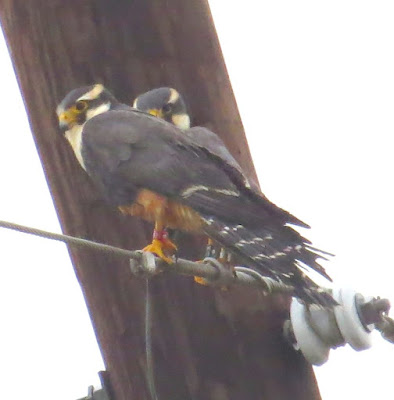 Having gotten our fill, we headed out, and I indeed let Slava get us through that dicey section (had I been on the ball I would have gotten a video of the experience) and we were soon on solid ground again!  We were surprised to spot a female Anhinga in a wooded section (we surmised there must be a hidden wetland somewhere in there), and a quick look over of Loma Alta Lake added several White Pelicans, Laughing Gulls, Pintail, Coots, and American Wigeon to the day list, along with a heard-only Black-bellied Plover.  A Belted Kingfisher flew over the little canal, and I had already closed out the eBird list just before getting on the paved feeder road, when there on the concrete siding were a Roseate Spoonbill and Great Egret hanging out together!  Thank God for the edit option! J 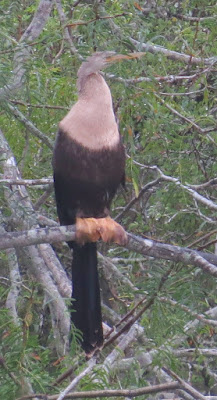 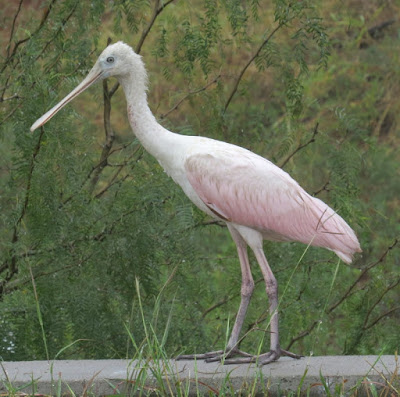 
Slava’s other reasonable target was the Sprague’s Pipit, so since I had seen them along some of the back roads of Willacy County in the past, we headed up there next.  Taking FM 1018 just north of Sebastian, we headed to the big water tower which is the landmark turn onto “Primrose Path” (CR 375 on Google Maps), only I received a Rare Bird Alert just as I did so:  Justin and Stephanie had sighted a Ferruginous Hawk, also in Willacy County!  When Slava fed the coordinates into his phone he exclaimed, “I don’t believe it – it’s right here!”  It was actually south of us off FM 507, but on his little map you could see the pin and our position close together, so since that was a life bird for him as well, we headed down!  We didn’t see any hawks at the “spot”, but saw an empty car parked near the levee, and the next thing I know Justin is calling me saying, “Is that you guys?” J  They were walking on the levee, and said that the bird had flown east, so we got on the levee (driving) and started heading that way.  They had lost the bird, but we headed on, as I suddenly remembered that Sprague’s Pipits love these levee roads as well, so maybe we could knock off two lifers!  It wasn’t long after that, actually, when two pipits did flush and land briefly, and Slava was able to get a picture shot off, but he had forgotten to change his settings from the falcons, and it was all blurry! L  He had been telling me how, with technology and RAW digital photography, you can do miraculous things to “fix up” an otherwise inferior photograph, but camera shake is not one of them!


So we continued on, shooting a very cooperative immature White-tailed Hawk (that was banded; got that data to Bill Clark J), but we also spotted a very nice Krider’s Red-tailed Hawk closer to the end of the levee (which was gated, so we had to turn around and come all the way back)!  I was checking it carefully, though, as young Ferrugies can be nearly identical, but this guy had the bare shanks, so that nailed it (Ferrugies have feathered shanks, which Justin’s photograph of his Ferrugie showed beautifully).  Several Harriers were cruising around as well. 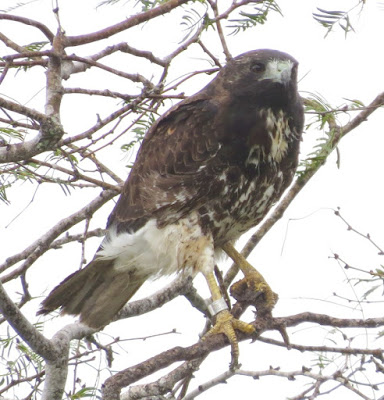 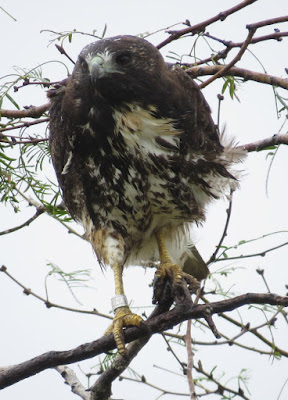 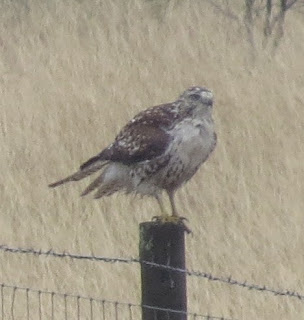 "Krider's" Hawk, a pale race of the Red-tailed


We returned to “Primrose Path” just to show Slava the road, as he and Lori were going to spend the night closer to the coast and he would probably try again for the pipit on his own the next day.  No pipits, but we did add a Black-necked Stilt, Shovelers, and Ruddy Ducks for the day in the big pond (and some very curious Brahman cattle J).  We wheeled up to the beginning of the “Santa Monica Route” so I could show him that road, as I sometimes had pipits there; for photography purposes he had a lot of questions about the bird’s behavior and what to expect (e.g., are they skittish, or will they stop and look at you after they flush, or do they just keep on walking once they land?  All of the above…)!


It was still raining on and off the whole time, so Slava suggested trying for the Plumbeous Vireo at Roselawn Cemetery again.  We headed back out by way of FM 498, where a pair of Sandhill Cranes flew across the road, and lots of Kestrels and shrikes lined the wires.  After a stop at the Subway in Combes for lunch (and then a subsequent stop at the Starbucks in Weslaco) we headed over and finally found the place (with the construction on the freeway it was tricky)!  Even though the sun was breaking out, the wind was whipping something fierce, so we really couldn’t pick up much; Chipping Sparrows were nice for the day, along with Orange-crowned and Yellow-rumped Warblers, Cardinals, a Tropical Kingbird, and a Ruby-crowned Kinglet.  We found the spot where Huck had flushed a nightjar whose identity was still up in the air, but I figured he was long gone (the bird, not Huck).  A funeral was also starting up, so we decided to call it quits and headed home with a modest 52 species for the day (which, considering the crummy weather, wasn’t bad). 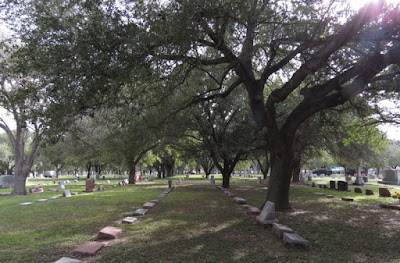