Sudha suggested we leave earlier in order to get to Brushline Road around sunrise, so we did just that, enjoying a lovely pink and red sky in the process!  The drive to South Brushline was uneventful, but as usual, stuff was chirping the minute we made the turn onto the dirt road:  Green Jays bounced around, and a Ladder-backed Woodpecker finally gave us a great view!  We eventually had great looks at Lark and Savannah Sparrows, Cardinals and Pyrrhuloxias side-by-side, and even the two “crowns”:  the Ruby-crowned Kinglet and Orange-crowned Warbler in the same bush right in front of us!  A Long-billed Thrasher was stubborn, but a Curve-billed posed next to a Mockingbird for another great comparison!  Horned Larks called but never showed from the ag fields, whereas we did spot the Long-billed Curlews that were calling and then flew over the horizon!  We passed a more open field with tons of Mourning Doves on the wire fences, but also a Vesper Sparrow (that took off the minute I got the scope on it… L)!  A Common Ground Dove exploded from a tree and then thankfully landed again, and along the portion dubbed “The Swamp” (even though we couldn’t see any water in it) was a pair of nice Harris’ Hawks!  At another stop a Verdin miraculously came out in the open, and just before we reached SR 186 a covey of Bobwhite crossed the road one by one! 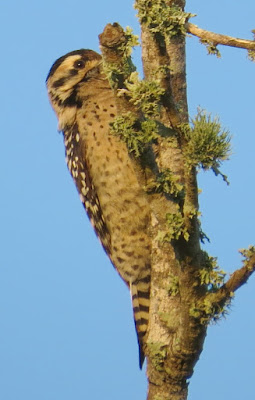 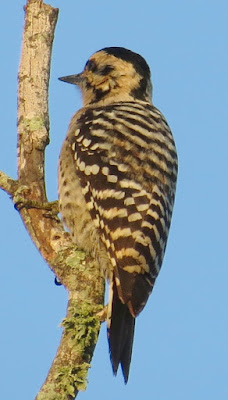 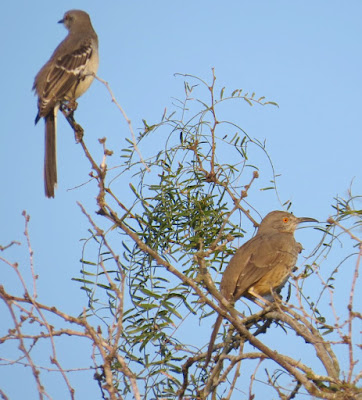 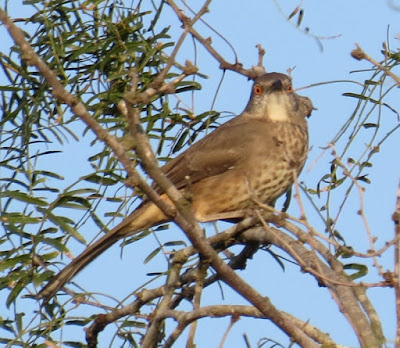 Close-up of the thrasher 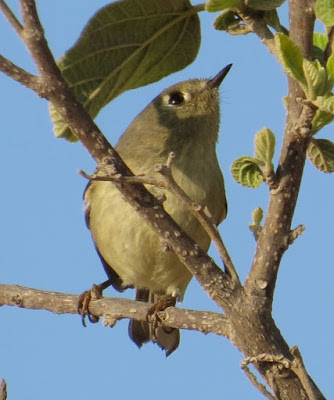 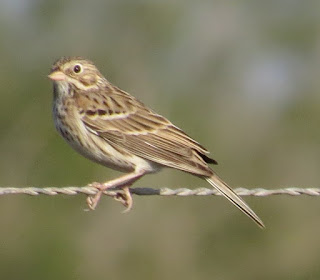 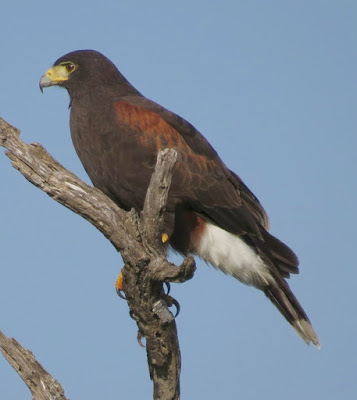 We crossed the highway, but not before a caravan of three cars made the turn onto North Brushline before we did, and we figured they were probably birders as well as they were crawling along, just like us!  We came up to a spot where they had also apparently stopped where some House Wrens were fussing, but try as we might, no Ferruginous Pygmy Owl came in…  We eventually passed them (we heard one lady announce she had seen a tortoise), but things were rather quiet until we came upon a posing Caracara that we enjoyed for some time!  His mate flew in while a flock of White Pelicans sailed past behind them! 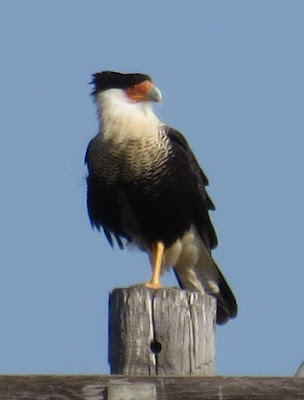 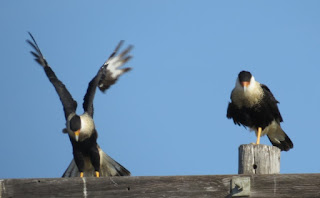 Just about that time a Roadrunner popped up beside the road!  He started to go back into the brush before I decided to mess with ‘im, and sure enough, he stopped short and started tentatively making his way towards us!  When he did creep back into the brush, I said to Sudha, “Five’ll get you ten that what he’s gonna do is creep down the fenceline behind the bushes until he’s even with us!”  And sure enough, she soon whispered, “He’s right there!” (invisible to me, of course…)  He then started making a funny grunting sound I had never heard a Roadrunner make, when suddenly there was a scuffle, and apparently a second Roadrunner had come in to investigate! 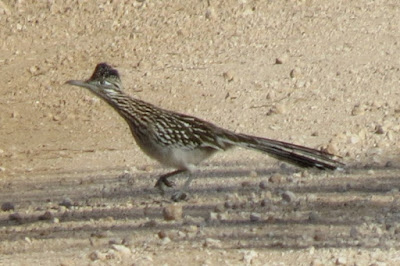 Things got really quiet after that; we made the turn onto Ken Baker and continued to crawl, not seeing much of anything except a cooperative Kestrel and some very distant Sandhill Cranes flying over the road.  An Eastern Phoebe sang but wouldn’t show, and heading down Rio Beef a Krider’s Red-tailed Hawk circled overhead!  The marsh near the end of the road was pretty dead as well, but as we headed west on 186 towards the freeway, I noticed a new parking area between Rio Beef and Brushline; apparently there’s a new access trail there!  Will have to try that one out…


The list this morning was pretty meager with only 47 species (with White-tailed Hawk being a big miss L) But my charges had some really nice looks at some special birds (Sudha said the Caracara and the Pyrrhuloxia were her favorites), so they were happy!  I knew their own day list would get substantially bigger, however, as they were fixing to explore Estero Llano Grande on their own that afternoon!  Bird list:


Pyrrhuloxia
Posted by Alamo Inn B and B Gear and Tours at 8:14 AM