Gaby really wanted to experience the Parrot Show at Oliviera Park (and hopefully get some photos J), so we started a little later in the morning to accommodate that, adding a singing White-winged Dove to the list before starting out.  The day before I had given Gaby directions to the Green Parakeets on Bus 83 east of Bentsen Palm Drive to try on his own before the 9:30 pickup time, and they nailed them – even got a photo of one in a tree and not on the wire! J


So the first destination was Dan Jones’ Yard in Progresso Lakes, as we both had forgotten that Fulvous Whistling Duck was on the want list!  Dan hadn’t seen the bird in a while, but he beckoned us to come and be prepared for mosquitoes!  It was pretty foggy heading out, but thankfully it had lifted enough to see the other side of the resaca and scan for ducks!  (The skeeters were indeed fierce, but an Off Wipe seemed to do the trick…)  While Dan explained to Gaby how a resaca was formed, we scanned the shoreline, picking up the regulars, when suddenly Gaby found a lighter-colored duck – it was the Fulvous!  Gaby spent quite a while trying to get it to put its head up (and getting good-naturedly shushed by Tovi J), but what finally got the bird to cooperate was a bully Black-bellied that drove it into the water!  On the way out we had a nice White-tailed Hawk in great light (now that the sun was out).  As we headed out I warned Gaby that the feral Muscovy would be on the list (as eBird does track feral birds)! 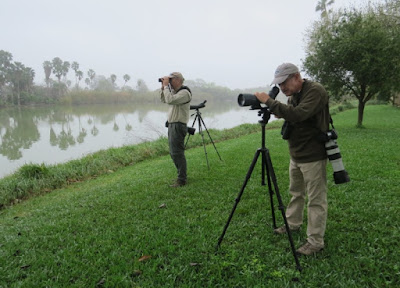 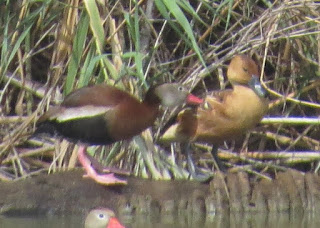 The Fulvous (right) was snoozing peacefully until a bully Black-bellied Whistling Duck drove him into the water (below)! 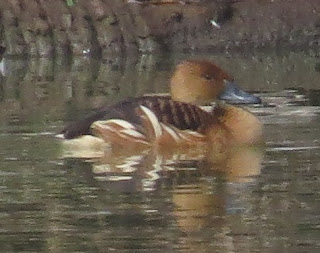 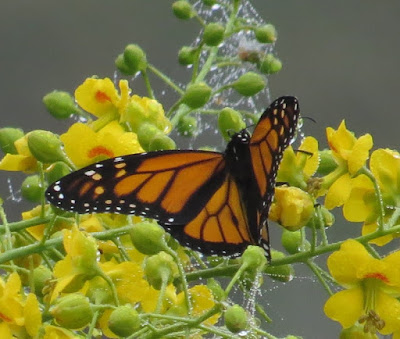 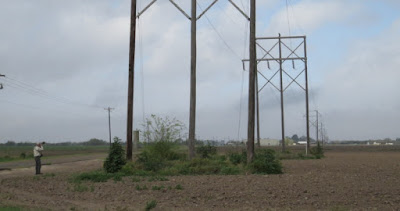 Gaby shoots a White-tailed Hawk (below) on the way out 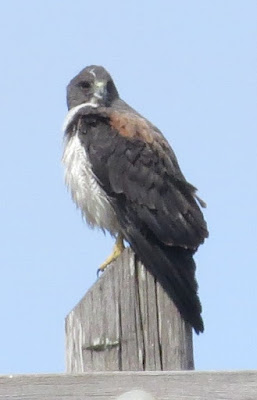 From there we were going to try for the becard at the Inn at Chachalaca Bend, but I just got their message machine, so I left a message myself and he headed towards Harlingen and then south towards SR 100.  A second call again got the message machine, so we assumed they were closed and headed on to Palo Alto Battlefield NHS.  The wind had picked up, but we wanted to try for Cassin’s Sparrow (and the possibility of Aplomado Falcon, as Julie and Richard had happened upon one there the week before).  We didn’t have to go far on the trail to the overlook before we heard one singing, and despite the wind, with a little coaxing he came right up for great pictures!  Another lifer in the bag! 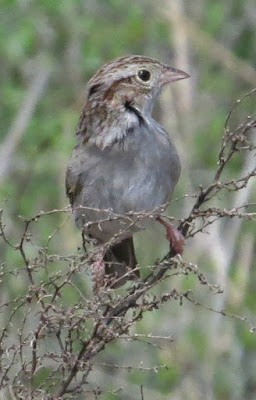 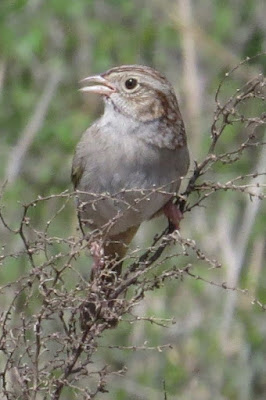 From there we headed to Old Port Isabel Road, where crawling along didn’t bag us much more than Long-billed Curlews and singing Eastern Meadowlarks, as there wasn’t a falcon to be seen.  The road was in great shape, though (relatively speaking), so we made it all the way to the north end, with the most exciting bird being a Roseate Spoonbill in the canal!  We continued on to the “Blue Shack” and scanned from there (nothing), and when I saw that that northbound dirt road that we sometimes turn into going westbound on 100 (and was always a muddy mess) was absolutely dry, I decided to explore that road (which turns out to be the southern extension of Buena Vista Road according to Google Maps), as folks had also reported falcons along there!  It turned out to be pretty empty except for a couple of Loggerhead Shrikes (and lots of windmills), but when we got almost to FM 350 the road took a major turn to the worse, with huge ruts deep enough to sink an 18-wheeler, and a major wet spot at the very end!  Thankfully we made it through, but it was definitely an adventure (and we all needed a bathroom break after that…)


Next destination was Boca Chica Beach in hopes of the Snowy Plover (and another shot at the falcon), so we headed down there by way of SR 48, where I made a sudden pull-off after spotting a couple of suspicious-looking raptors on the wire that turned out to be White-tailed Kites…  On Boca Chica we stopped just past the checkpoint; some blob appeared to be in the hacking box, but we just couldn’t make it out, so we reluctantly continued on, deciding to check the flats first then poke down Palmito Hill Road afterwards.  With the wind, all the little shorebirds were waaay out there (those close enough to discern looked like Sanderlings), but we did have a flyover Gull-billed Tern, and at the next place we could stop, we saw lots and lots of Reddish Egrets of both flavors (Gaby had never seen the white morph before), plus a feeding frenzy of Red-breasted Mergansers!  Heading on down to the beach, birdlife was scarce save for the three gulls, and a lone Royal Tern and Willet, so we headed back towards Palmito Hill Road.  On the way I thought I saw something on the flats, and wheeled around to find an immature Peregrine Falcon sitting on the sand!  Palmito Hills was birdless, so we continued on to Oliviera Park. 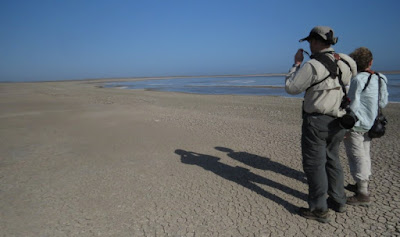 Pounding the sand for a Snowy Plover... 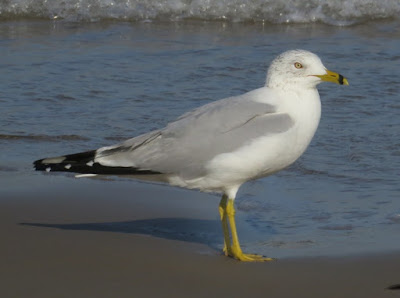 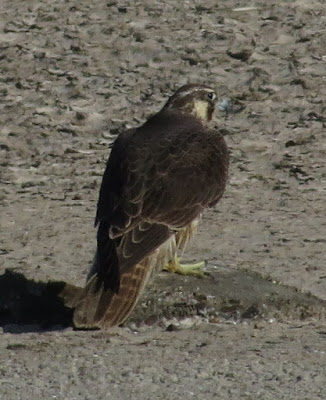 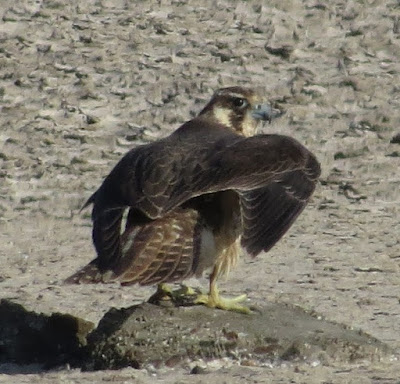 Getting ready to book... 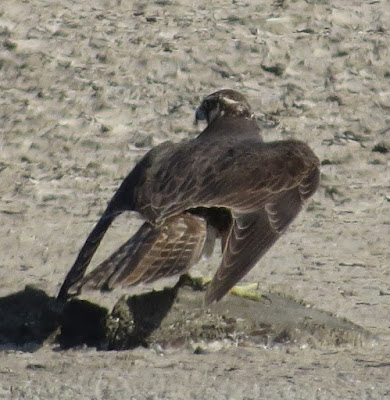 Ciri sure sent me on the back roads (and she didn’t even pick up on the accident we had to crawl around), but we eventually made it, and started crawling until we heard some parrots.  Actually, we saw some birders (or at least some tourists) congregating in the middle part of the park, so we parked there as well, chatting with a Winter Texan from Brownsville; they were so focused on a conversation about Pickleball that Gaby almost missed the first parrots to come in!  Well, by that I mean they flew over, making several passes, but never settling down…  As we tried to predict where they were finally gonna land, the Yellow-headed Parrot pair came straight at us, and unfortunately Gaby had his lens on full power and never got the shot… L  But we did see some parrots apparently land to the north, so we headed that way, and found a mob on the wires; a quick survey showed both Red-crowned (the majority of course) and a couple of Red-lored, but the pictures Gaby got before they all flew the coop revealed a Lilac-crowned!  Bingo!  We lingered a little longer in hopes that more parrots would land in the park instead of outside it; we heard the White-fronted Parrots, but never got a visual…  We finally gave up at it was apparent that their roost was somewhere in the surrounding neighborhood, and headed home. 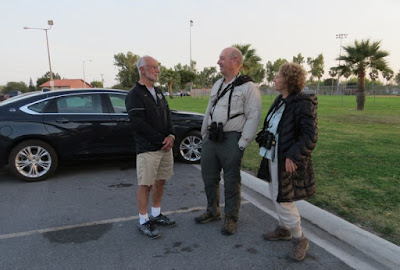 Chatting with a Winter Texan before the show...

A few of the Red-crowned Parrots gather on the wires before heading off into the neighborhood... 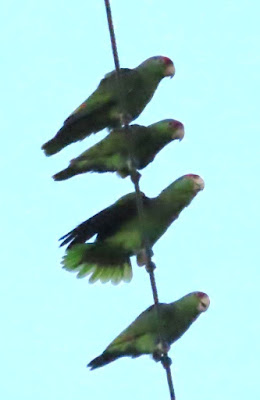 We had a modest 54 species for the day (unless I forgot something, which you can do when putting it together the next morning…).  Bird List: