Pauline spilled the beans and announced that this was a birthday trip for Ginger J, so I was hoping we’d see some special birds, and they were happy to enjoy whatever came our way!  The original plan was to bird around Hidalgo County first and go up to Starr County the next day, but the girls got wind that a large group was heading up there the next day as well, so we switched plans and blasted up to Salineño today! J  It was a good plan; it was a beautiful sunny day, starting off cool, so we went straight to the “Seedeater Trail” at the Salineño boat ramp.  The Osprey pair was there as usual, along with the Spotted Sandpiper and the Ring-necked Duck pod (with a couple token scaup), but nothing upriver, so we headed up the trail.  The two Cassin’s Sparrows were still song-battling in the open area to the north, and Olive Sparrows shuffled unseen to our south; a small bird landed on a small leafless tree in front of us and got my heart racing, but it turned out to be a Lesser Goldfinch…  We got to the end of the trail where there wasn’t a bird to be seen of any sort, but presently a pair of Mottled Ducks flew by and Ringed Kingfisher flew overhead and headed north.  We decided to take that “dicey” trail into the ravine in hopes of kicking up the seedeater and wound up on a pretty decent road (although littered with trash) where the Ringed Kingfisher was perched beautifully on a dead snag!  Rough-winged Swallows were landing briefly on the path as well, but from there we circled back on another road, and at one point I actually did hear the seedeater singing, but none of us could find him.  We had a female Vermilion Flycatcher show off, but raptors were more cooperative, with an adult Zone-tailed and an immature White-tailed Hawk giving nice views in the sky.  We eventually came to the steep hill, slip-slided down, and headed back to the car, spotting a trip of Gadwall on the way. 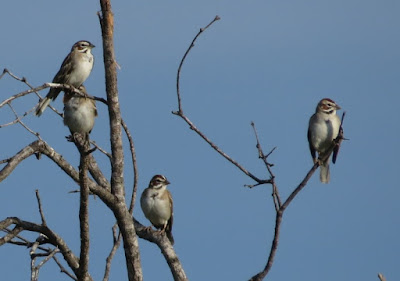 Lark Sparrows at the ravine 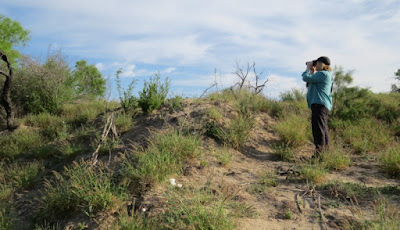 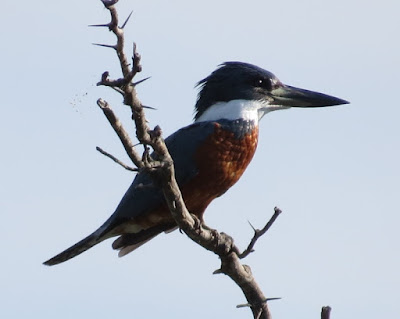 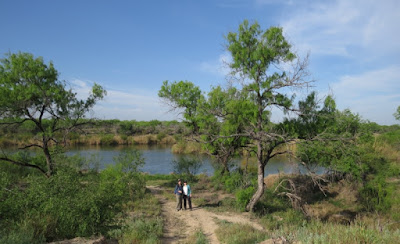 Ginger and Pauline at the bottom of the hill, overlooking the Rio Grande!

I couldn’t believe how green the feeder area had become since my last visit!  As warned earlier in the year, things were quieting down (Merle and Lois told us that the best time is from mid-December through February, and then things really start slowing down in March), but we did get nice looks at Green Jays, Kiskadees, Golden-fronted and Ladder-backed Woodpeckers, titmice, the White-tipped Dove, and the star of the show, the Clay-colored Thrush (Ginger almost missed him because she ran out to see a Gray Hawk Merle had spotted)!  The orioles never came in, surprisingly, and even the blackbirds weren’t as numerous as usual (we saw one with some leucism in its wings and pondered whether it could have been “Patch’s” offspring…)!  A group of White Pelicans sailed overhead as we relaxed, joined by a Black Vulture!  We made one last river watch, adding a Red-shouldered Hawk to the mix, but nothing else (although we heard the Altamira). 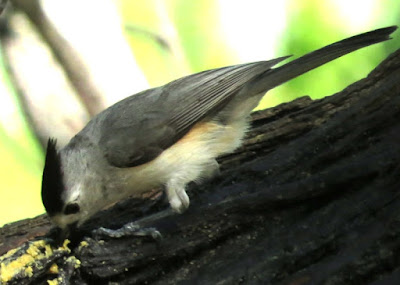 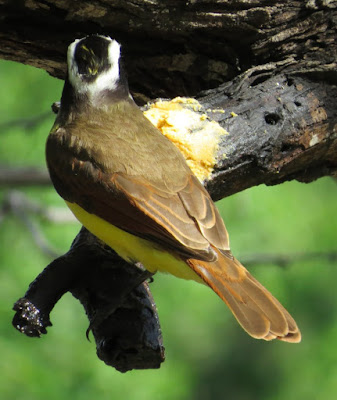 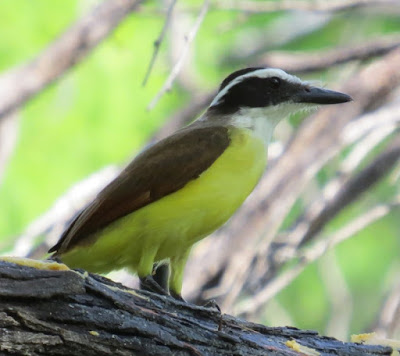 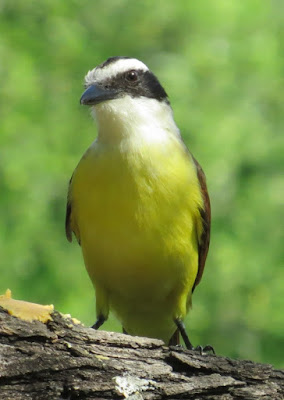 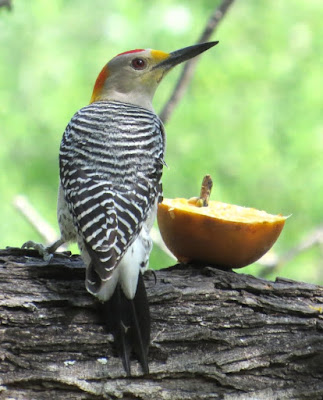 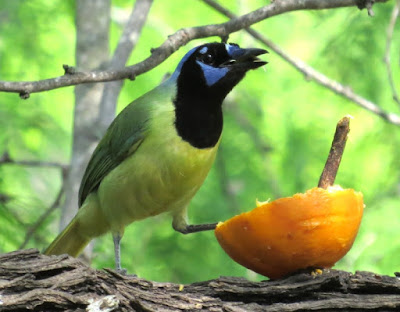 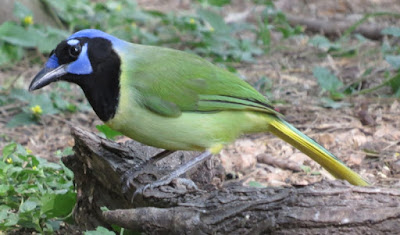 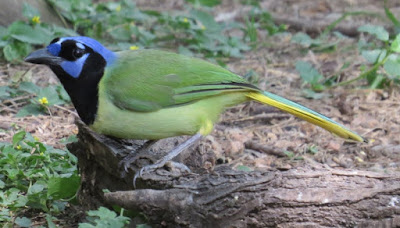 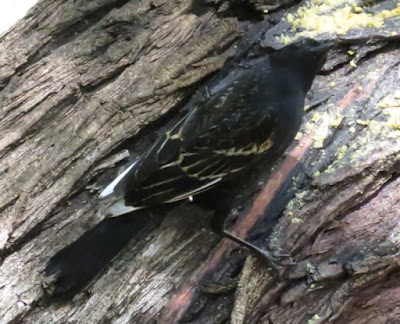 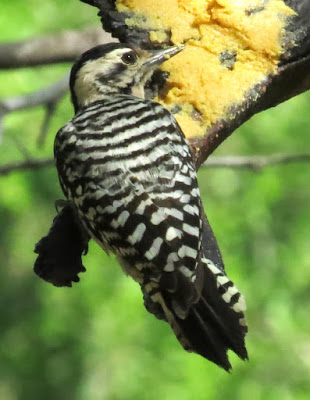 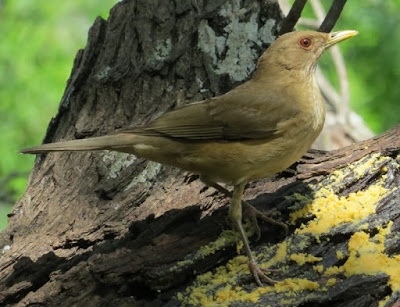 Headed onto the Dump Road from there; the girls had mentioned that it would be really neat to see a Roadrunner, and Pauline nearly choked on her water when she spotted one sitting up on a post in perfect light!  (When one of them sends me the picture it’ll go in the blog… J)  A couple of Black-throated Sparrows were singing, and thankfully one of them sat in the open for great views!  My FOS Ash-throated Flycatcher “police-whistled” from a wire as well. 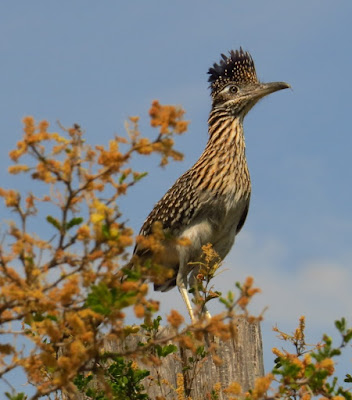 We headed to Falcon State Park, picking up a gorgeous Caracara on the entrance road (who refused to pose for pictures unfortunately).  After checking in we crawled around; the Huisache was riotously in bloom and provided a golden foreground to the deep blue of the lake!  Eventually both a Verdin and Pyrrhuloxia gave great views, and on the way to the boat ramp I got a glimpse of a Bewick’s Wren, but it wouldn’t come back out for my charges....  The young Vermilion Flycatcher was still on his wire, however!  In the primitive camping area we paused to enjoy some Killdeer when Pauline spotted a drop-down gorgeous adult male Vermilion Flycatcher!  Eastern Meadowlark and Cassin’s Sparrow sang there as well, and another Ash-throated showed well on the wire.  Like the last time, the place was full of revelers, but as we “off-roaded” near the overflow area we at least added some Least Sandpipers to the list!  Too many people were in the picnic and cabin areas to really bird anything (no drone this time J); even the Caracara had abandoned his post (quite literally)!  We made a quick stop at the butterfly garden, finding a lot of Elada Checkerspots and an expired Large Orange Sulphur that was useful for pointing out field marks, but it was getting rather warm, so we called it a day after that (adding a couple of Laughing Gulls yelling from the lake) and headed home (was hoping the parakeets would be back on their wires in Roma, but I guess it was even too hot for them…).

Falcon Reservoir with blooming Huisache in the foreground 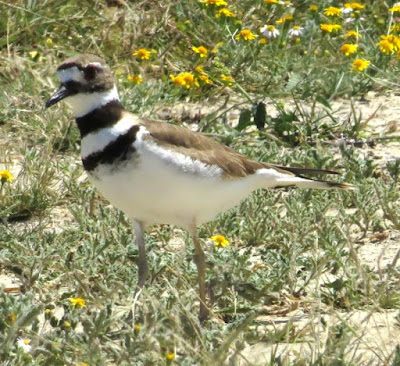 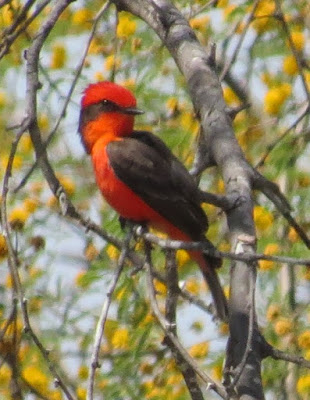 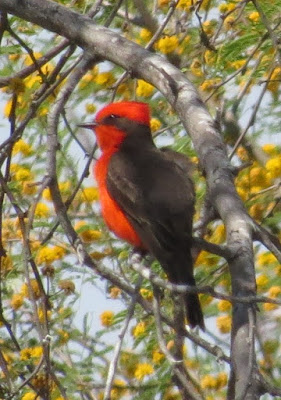 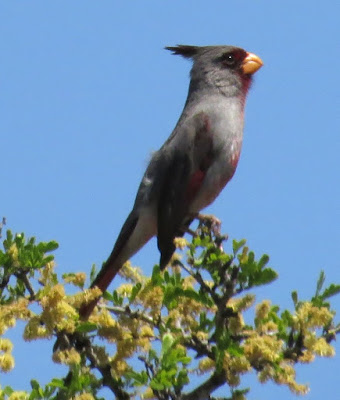 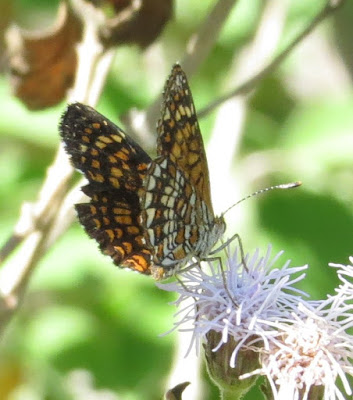 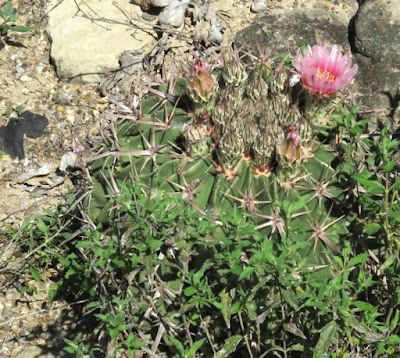